Referring to a Smoothbore as a Smoothie

Uh oh
I started a thread this week where I referred to smooth bore's as , well you know.
btw, I don't live in an apartment.
I do shoot at my clubs range. I am not fortunate enough to own my own land, nor do I hunt.
I just love to shoot.
Been a member of my club for more then 25 years. I have never seen anyone shoot a flintlock in all the years I have been there except me. Let alone a smoothie.
Some percussion cap guns on occasion are brought out and of course plenty of unmentionables.
Getting wound up about terminology is a waste of time and effort.
J

To paraphrase The Dude, “it is that whole brevity thing”. Today words have to be shortened, acronyms have to be used because we just don’t have the time to say the whole word. But maybe since this is a sport where we tend to slow things down a bit it is like muzzleloader Ebonics where we are creating our own language
B

Here is the impression I get. Someone is new to muzzleloaders, or guns in general, and they want to fit in with the crowd. They think using all the cute words will make them fit in better. But they have not been around it long enough to realize that some of the cute words actually sound kind of dumb. Only people I have ever heard say rock lock, smoothy, or remmie were guys that just recently bought their first gun. It doesn't mean you live in an apartment in the big city. The cute words are just someone trying to fit in and not quite doing it right. All it takes is being safe, being polite, and being yourself. Do that and I will be happy to go shooting with you. Even if you bring a inline rifle, fake powder, and have never fired a muzzleloader before.

Sort of related. An accountant or someone like that buys a Harley Davidson. Then buys the whole biker costume. Sews on a bunch of 1% diamond and other outlaw biker patches to get the look just right and heads over to the biker bar to be part of the cool crowd. That won't end well.

"Flinter", "fowler", "smoothie", "capper", "remmie", were all foreign to me in my neck of the southron woods. I always assumed it originated up north because I know many northerners who call a transmission a "tranny". Heck, we still say Kentucky Fried Chicken as opposed to the modern KFC. To the OP if you are sincere, all the above except for "fowler is very modern terminology excepting that particular term is used like "hunter" for the person behind the gun in the period.

I’ve been shooting ml close to fifty years. While I have some breechloaders for personal protection my fun shooting and hunting are all done, and have been done these near fifty years with ml I use smoothies, rock in the lock, suppository gun as general speech.
I would doubt that smoothie is a very old term. Historically in colonial and much of early America almost all guns were flintlock smoothbores. Rifles were the unusual
Robert Rodgers didn’t use a rifle most of his frontier life. Wealthy William Johnson probably didn’t see one ever till late in his life
John Adams wrote to Abigail how amazing rifles were. So saying smoothie in relation to a gun, or even flintlock, would have been akin to saying four wheeled car, or gas powered car. One might say electric car, because they are still out of the ordinary.
Screw barrel was said in the old days referencing a rifle.
We are playing a game. Even the hard core blood shooter is following a hobby. And should be able to laugh at themselves and use self deprecating humor.
People that go to sci fi conventions and comic book stuff, model railroaders, steam punkers ect all have to stand back and chuckle at them selves.
Because we are all doing the same thing, playing with something and getting a kick out of it
We can get our breechclot in a wad over ‘possibles bag’ or calling commercial yellow deer skin ‘buckskin’. But is that how you want to be?

My wife makes strawberry smoothies all the time.

Magungo1066 said:
I am glad no one had this attitude toward me when I first started out. I doubt I would have ever found myself here.
Click to expand...

People have hated my stinking guts for years. Life goes on, no big deal.

I guess that make me a smooth operator.
Robby 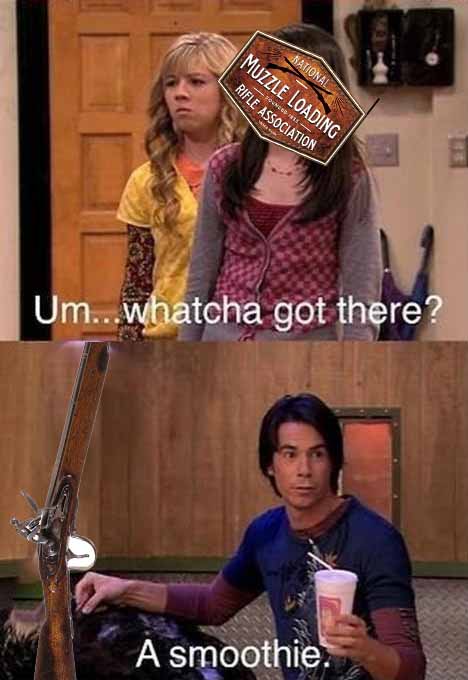 ahh this classic meme is relevant

Every hobby has Elitists , it's just how it is

Guys with expensive rifles looked down on me years ago for shooting surplus modern rifles .

I'm kinda guilty of it too in some ways as people on YouTube pound round balls down the pipes of reproduction 1861 Springfields using cleaning patches as ball patches and Pyrodex. I'm like.....this is all wrong.....but it's their rifle they can do what they want

I never cared what others took into the bush during my hunting days because I used a flintlock from start to finish. I never felt "inferior" because someone else hunted with something modern, I still got it done one shot at a time.
Terminology meant little to me. I used, "gun, rifle, musket or smoothbore". As long as we know what's being referred to we have common ground.

I agree
I recall being upset when I saw my first in-line, ‘that ain’t muzzle loading’ and ‘now these yo-yos will have an advantage over us during ‘our’ season.
How wrong I was. I ain’t lost as deer to a guy with an in-line, in fact Joe with an in line doesn’t effect me at all.
I choose to hunt with ball and flint. I choose now to have smoothbore. It don’t matter what your shooting, as long as it’s not at me.Each their own.
Too often we get rattled over what some one else enjoys.
Do you put ketchup on a well done steak? Doesn’t effect me.
I even have shared a camp with guys drinking Miller lite
Sorry to have said that fellows, and I want you to know I washed my hands when they left.
But it’s what they liked
I guess

Well, it was never my intention to stir up a hornets nest, just curious because I see the term often. I figured that the term was a modern reference since I often see on other forums the use of Remmey for Remington, Whinny for Winchester, and Marley for Marlin. Though, every time that I see "Smoothie", I have flashbacks to that darn turbo charged machine that my wife has that sounds like a two cycle leaf blower each time she fires it up. There is no safe harbor within the house to where one can avoid the sound. Again, I don't care what you call it, just glad that my dog doesn't run and hide when I fire one like she does when the wife cranks up her Smoothie Machine.
F

Old timers have no use for "cute".

You know, smoothie. As opposed to twisty, like Rifley McRifleface.

I bet she calls hers a smoothie, and a fine looking one at that. As far as I'm concerned, she could call it anything she wants.

Right out of Hollywood.
N

billraby said:
Sort of related. An accountant or someone like that buys a Harley Davidson. Then buys the whole biker costume. Sews on a bunch of 1% diamond and other outlaw biker patches to get the look just right and heads over to the biker bar to be part of the cool crowd. That won't end well.
Click to expand...

Yeah, the 1% percent patch crap won't buy you much in our local bars save a a black eye or broken ribs.
P

100 yard groups with a Smoothbore Musket
2