rather be lucky than handsome!

sitting around contemplating the meaning of life this morning and remembered a muzzleloader a friend gave me a while back.
then I got to wondering if I had cleaned it properly last time I shot it.
went looking for it and found it in the office closet with some other seldom used guns. not as my wife calls them, guns you don't use. just seldom.
so any hoo I dragged this inline down and took a gander at the bore. hmmm! nice white rime as far as I could see down it. I shot it with clean shot ffg last time and it makes a white crust when left.
long story short got it cleaned out, no pitting . luck was with me. it has been in that closet for over 16 months. rather be lucky than handsome!
maybe after a nap i'll shoot my 50's and 54's and spend the evening cleaning. or not
Last edited by a moderator: Apr 26, 2020

Keep in mind we don’t discuss inline muzzleloaders here, thanks.

No it’s okay, I just don’t want you to get dinged by the mods.

A quote from the Red Green show "If'n your not handsome, you need to be handy". I guess we can add lucky to that. I'm none of the above but I'm glad your firearm turned out ok. Nothing will sink your heart more than to find one of your firearms covered in rust.
C

Dutch Shoultz once told a similar story; Shot both rifles all afternoon, late for a date with his lady, left guns in closet, remembered them several days later! EEeekk! Scrambled to get guns cleaned only to find they were OK. IIRC, he had sprayed WD-40 into the bores before he left to see his ladyfriend. I don't mean to re-start the "WD-40 Debate" all over again, just posting to say that, usually, it's better to be lucky than good. Or handsome. LOL!

I was impressed that the clean shot just built the aforementioned white rime in the bore with no sign of rust.
I stumbled on clean shot when it was a new product. Couldnt get it here where i live. Happened into a sporting goods store in Wisconsin while on a business trip close to 20 years ago now it seems. They had a case of it sitting there waiting to be put on the shelf. Asked if they would ship it to me in Idaho. Kid got the manager and she said you bet, you buy the case and we will ship free! Been shooting it every since. Down to my last bottle.

I have used it for a couple of years.
It is the bee's knees.

The only time I had any trouble was with an antique that I had used water in first.
Also good for cleaning out rusty barrels so I found last weekend.
Cleaned out on old rusty 577-450 and it cleaned up in only an hour or so.
C

LawrenceA, I think you're confusing the Clean Shot that Deerstalker is using with a cleaning product that you are using. He is using a black powder substitute (such a 777 or Pyrodex) called Clean Shot that IIRC is made from sugar. It shoots REALLY clean. I've used it myself some years back. Only problem I had with it was that once you opened a can, you better use it up! Once opened it din't have much of a shelf life, in my experience.
D

Have a friend that some years ago on the last day of the hunt during our regular gun season here in OH got a Migraine Headache. He shot the load out and was using Pyrodex Select for the powder, then we left. With the Migraine he completely forgot about cleaning the rifle and stuck it in his closet, it was one of the Cabelas rifles. When he pulled it out of his closet the next year to go to the range to shoot just before deer season he realize what he had done the year before, because the inside of the barrell was coated with the white rime powder and no rust. He was lucky that is for sure. DANNY
C

He shot Pyrodex in it and left it a YEAR without cleaning it and had no rust??? Luckiest man on the planet! He shoulda' bought a Powerball ticket that day!

Centershot. You may be right about the clean shot being made from sugar! About the time it came out they were making substitute with vitamin c also.that is what i always thought CS was made with. The only thing i dont like about it is granule size. I have taken to shaking the living dickens out of the bottle and pounding it on my knee like i am churning butter in a quart jar. Then i sift it for size. Have never seen any difference in performance . Sure goes through my flask easier .

Sounds like Black MZ. A few of us have been using that stuff and it works real well but not being made anymore. No rust for me either but hell on brass cases if left uncleaned.

deerstalkert said:
...I shot it with clean shot ffg last time and it makes a white crust when left.
long story short got it cleaned out, no pitting . luck was with me. it has been in that closet for over 16 months. rather be lucky than handsome!
Click to expand...

Do you mean Clear Shot? As near as I can tell Clean Shot powder is smokeless and intended for pistols and shotguns. Clear Shot is a BP substitute, however.
T

30coupe said:
Do you mean Clear Shot? As near as I can tell Clean Shot powder is smokeless and intended for pistols and shotguns. Clear Shot is a BP substitute, however.
Click to expand...

Were/are both. I have a container of each sitting in front of me right now. Clear Shot, was marketed by GOEX, and what I have is FFFg in the familiar flat can used by GOEX/Dupont. Can is primarily white with red and black printing.

Clean Shot, was made/marketed by Clean Shot Technologies out of Whitewater, Colorado. The containers I have of it are the plastic bottles of the type Pyrodex comes in, only white with a white plastic lid. The label is red and white, with some black printing. I won a mixed case of the stuff at gun club raffle and have some that is pelleted in 30gr charges and some that is "loose" FFFg.

Both are described as Black Powder substitutes on their labels.

Ahem! It's harder to get lucky, if you aren't handsome... On the other hand, someone told me a long time ago that you get a lot more dates if you set your standards low enough. 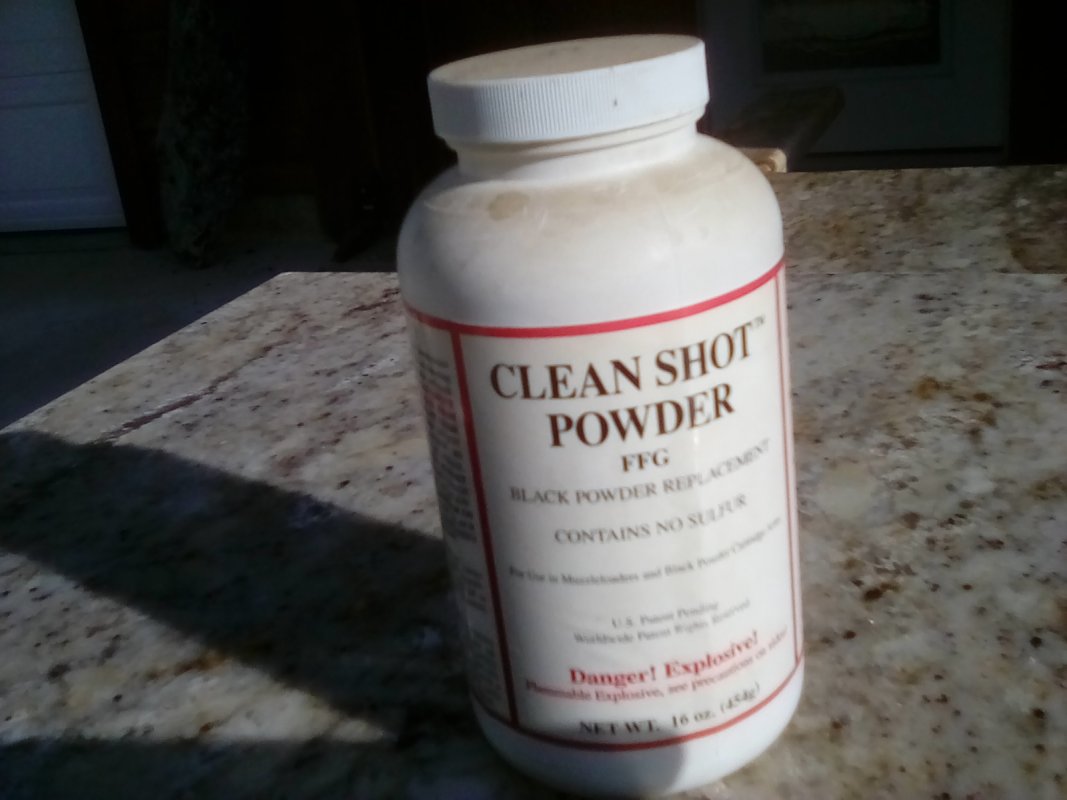 my last bottle of a dozen

I bought a jug of Triple7 once and ended up giving it away after a few shots. It left a hard crust in the breech that was very hard to get rid of, the ramrod would get stuck also. I'm sticking to Goex, expensive but reliable and easy to clean. I realize people have good results with it but this is just my experience.
C

lyman 54, I have heard of this happening but have never experienced it myself. But, I am of the Dutch Schoultz school, I believe in wiping the bore after each shot. Why? In doing so you present the bore to the next shot in the same manner as the last shot, so each shot is fired with the same amount of fouling as the next, or the last. It maintains a consistent bore condition. Let me say that again; It maintains a consistent bore condition. If you pour 30 or so grains down the bore BEFORE you fire your first shot and then touch it off, then wipe the bore ONCE, down and back out, then even your first shot will have the sme bore condition as the next shots will. This isn't practical when hunting but for target hooting it works nicely. Once I read Dutch's method I understood the value of consistent bore condition. Don't let that crap build up - wipe it out! I use both T7 and Goex, T7 causes me no problems at all!
F

Thank you for the comment about Dutch Schoultz, Centershot. It re-enforces my decision this morning to order a copy. I'd been chewing over getting his manual for some time, but that attitude matches the approach I'd settled on myself.