Or more accurately what would an18th century armorer or soldier have had available to them to use to cut down a musket barrel? Were there rudimentary hacksaws? Google says hacksaws were made in the 1880s. I wasn’t sure if this was a gun smithing or historical question.

R-71 said:
wasn’t sure if this was a gun smithing or historical question.
Click to expand...

If you want advice on what to use and how right now, today? It's a question for the gunsmithing forum.
If you want to know what they would have used in, say, 1754,,, this is the place.
R

I might think files.
Looking at bone saws in a medical kit show us fine tooth saws were common and so were saws to rip boards down to a half an inch or thinner for furniture.
I forget the name of the mountain man to whom this happened. But a journal recorded how a mangled arm needed to be amputated. Not having a bone saw a buck saw blade was turned over and new fine teeth cut in it to do the surgery.
So….
Working with a file a fine toothed blade could be made.
I have cut metal with a coping saw as quickly as a hacksaw
L

A soldier... wouldn't be doing it.

Metal files, a wood saw, wood working tools, and a tool to cut some screw threads...to say the least.

Cutting down a musket also means shortening the stock and ramrod too, plus repositioning of hardware, and cutting the butt end of the ramrod to accept a worm. Then one would need to refit the bayonet socket because the Bess or Charleville have tapered barrels. It's quite an operation.

Which is why it's highly unlikely that Rangers used "cut down" muskets. The "musket barrel pieces" allegedly found on an island, may not have been from actual military muskets, and vary in length. Further, muskets were the property of The Crown, and cutting them down would've been very naughty. Rogers did contract for some muskets to be locally made, and these might have been made short, and possibly could've been cut down, but the money spent wasn't his..., so again if they were The Crown's property, cutting them would be unlikely.

It's much more likely IF the rangers carried shortened guns, that they shortened civilian weapons. A lot of the recruiting information on Rogers Rangers, as well as other ranger companies, show the folks enlisted were to bring their own arms. Since a lot of this was done in New England, smoothbore fusils and fowlers, some of which would match the caliber of a military musket, would be the norm.

Especially with Fowlers, these guns tended to have long barrels, even longer than a musket, so..., were the rangers using shortened muskets OR did they shorten really long large caliber fowlers to something like musket barrel length?

In his book, Small Arms of the British Forces 1664-1815, Dr. De Witt Bailey gives whole lists of tools and parts sent here during the FIW for use by Regimental Artificers. "Artificer" was the general title of anyone detailed to work on the Arms and Equipment. The Artificer's Tools lists include a surprisingly long list of tools that include tools for Blacksmiths, Gunsmiths, Farriers and yes even some wood working tools.

"Lancashire" Pattern Hacksaws go well back into the 17th century and that is what they used to shorten barrels, then hand files to smooth the ends. Below is an example. 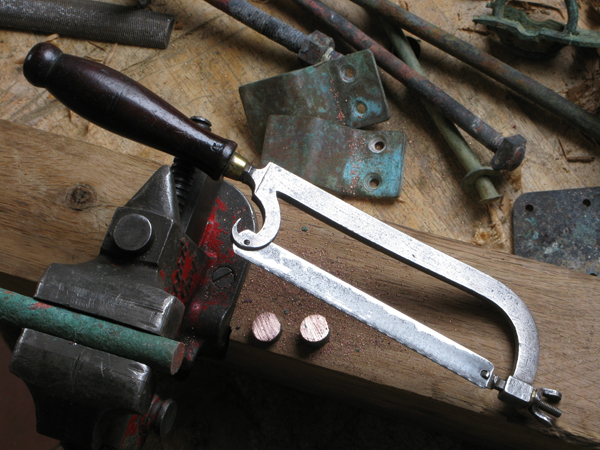 BTW, this style hacksaw was still being made into the very end of the 20th century.

thanks for the replies and sorry I broached what should have been more of a technical question With such subject. I spent a little more time looking for Information and turned up pic of the saw that Articifer has posted.

Loyalist Dave, i understand the Extremely strict environment that soldiers in the British military were subject to. I would also say never underestimate the mischief that a bored soldier can get into especially the volunteer Or irregulars.

regardless of this particular subject the F&I period is an interesting subject in world history. I live about 40 miles from Rogers childhood home and about two hours from the lake George area. The town I live in was founded right at the end of the war period.
L

R-71 said:
Loyalist Dave, i understand the Extremely strict environment that soldiers in the British military were subject to. I would also say never underestimate the mischief that a bored soldier can get into especially the volunteer Or irregulars.
Click to expand...

That's a very 21st century observation.
Let me clarify a bit for you.
All of the Rangers were volunteers, whether Rogers' or Gorham's or Maryland Rangers. All were irregulars too. (They aren't an F&I thing). Militia requirements vary from colony to colony, and people could do what they wanted to personal arms.

BUT the argument for "shortened Ranger muskets" comes from Rogers' rangers and "ranger island". Past historians have argued that British issued Bess were shortened due to some barrel ends that were found. The penalty for so damaging a King's musket was flogging and imprisonment at a minimum, to execution. This wasn't some Hollywood WW2 movie where the rascally band of unkempt misfits is also some form of expert commando death-machine where a dozen or so destroy the Nazi general staff who conveniently all gathered at one castle in France...., so the regular army "looks the other way" on the subject of modified gear.....

A few more things. A militia soldier would not have had a hacksaw on active duty. The Blacksmith or Armorer Artificers had one, but that's all. Unless the Militiaman's unit was actually attached to a British Regiment, there would most likely not have been a hacksaw available to him.

Now, IF his Unit was close to a village/town/city where a blacksmith or gunsmith could be found, then MAYBE his Commanding Officer might allow him to take his personally owned weapon to be shortened to one of those tradesmen, IF they knew they had the time and IF the Militiaman had cash money to pay - which many didn't. More importantly, though, and this is huge; if the Militiaman was not the most trustworthy - they wouldn't let him out of camp as he might just decide to leave and go home.