Question for the builders

There is square bottom rifling, round bottom rifling progressive rifling and so forth. So my question is does anyone know of or ever heard of v type rifling or is there historical references to this ever being attempted. Not so busy today and my mind got to wondering. 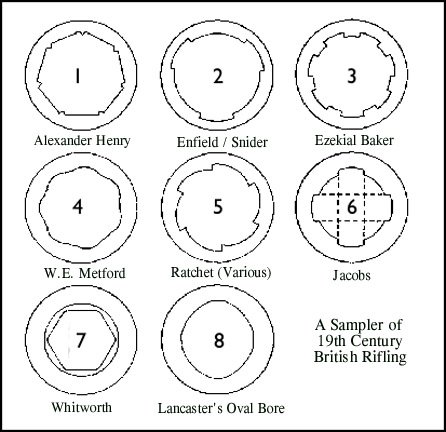 Alexander Henry has reverse V cuts sort of, The Lancaster Oval Bore is interesting wonder if the bullets for that looked like a football with a flat bottom, Lots of different things out there. Is there any references how each type of rifling performed, and makes one wonder if not so good perhaps that is why the more common types of rifling in use today still survive. Thanks for the input

You need to remember that accuracy was not the only thing being sought.
Henry rifling was a product of the whitworth rifling. By leaving the triangles in the corners a round bullet did not have to "upset" as much to fill the bore.
All these, except the Whitworth, were for round bullets. Whitworth could use round or hexagonal. The Enfield style was designed for Minies with wide shallow grooves.
Many of the designs also sought to improve cleaning or lessen fouling issues. No corners equals less trouble cleaning.
There was also brunswick rifling with 2 grooves and the ball had a band cast into it.
Like anything "horses for courses".

Did they perform?
Ever heard of the Whitworth Sniper Rifle or Henry Target Rifle?
A

Yes the Whitworth not so much the Henry. Still interesting the technology of the time and the folks who developed the different rifling styles. A lot of effort has been put into those ideals, Reminds me of the developmental situations that Browning must of went through in creating his early weapons.

Hi AH,
Some late 18th and early 19th century British sporting rifles had many "v" bottomed grooves (up to 16) and relatively fast twist. This proved to be pretty accurate out to 100 yards and with light loads and was fine for rabbit hunting. Unfortunately, with bigger calibers, and heavier loads for big game and longer distance shooting, the bullet and patch would strip the rifling and shoot poorly. This was the fashion and idea that Ezekiel Baker endeavored to contest with fewer square bottomed grooves and slow twist. Ultimately, he designed the rifle based on those features that became the official military pattern in 1800.

I once saw a old underhammer pistol with V groove rifling.
R

The' ratchet 'rifling reminds me of a customer showing me a rifle . I looked down the bore & remarked " Looks like ratchet rifling ".There was a unexpected pause then he says "Its not that bad ". Then the penny dropped he thought I was being derogatory as to the condition. .IE Rat s##t .I dispelled all such suggestion and the smiles returned .
Rudyard
P 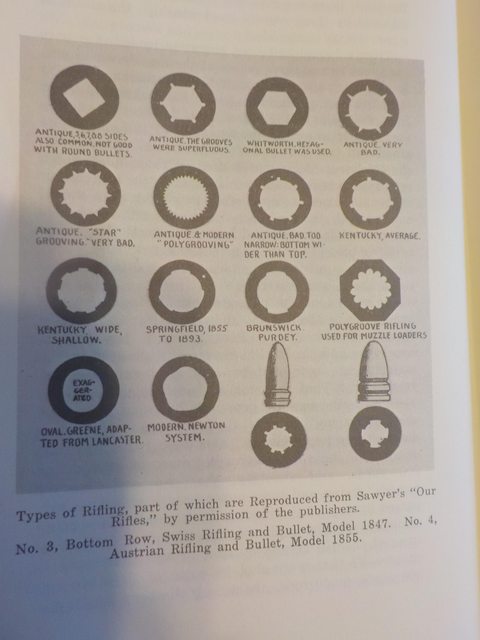 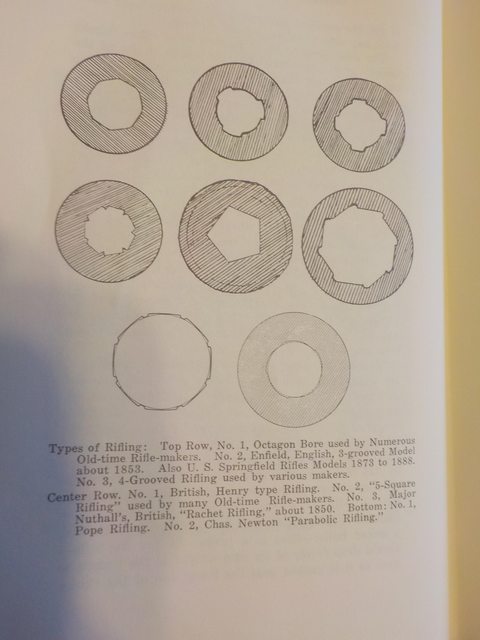 The antique star rifling diagram which states very bad is what I wondering about kind of answers the original question, the second sheet of diagrams is interesting especially the 5 square rifling and the caption used bye many old time rifle makers, thanks for the in-put, as I said my mind was wandering and as usual there is a vast amount of knowledge here.
You must log in or register to reply here.
Share:
Facebook Twitter Reddit Pinterest Tumblr WhatsApp Email Link