Reading through "Seedtime on the Cumberland" by Harriette Simpson Arnow, I see that gourds were often used instead of horns for powder carriage. Anyone know of someone using a powder gourd in reenacting/shooting?
S

I’m not sure, but can’t recall seeing any originals, though I’m sure a gourd would deteriorate long before a cow’s horn.

LuVerne Schumann said:
Reading through "Seedtime on the Cumberland" by Harriette Simpson Arnow, I see that gourds were often used instead of horns for powder carriage. Anyone know of someone using a powder gourd in reenacting/shooting?
Click to expand...

No, haven't seen someone doing it. I have seen references to it, but no one recreating it. Water gourds, gourd bowls, and gourd dippers, I've seen. Working on two gourd canteens myself.
N

For powder I'd be tempted to coat the unseen interior with a water proofing of some type. 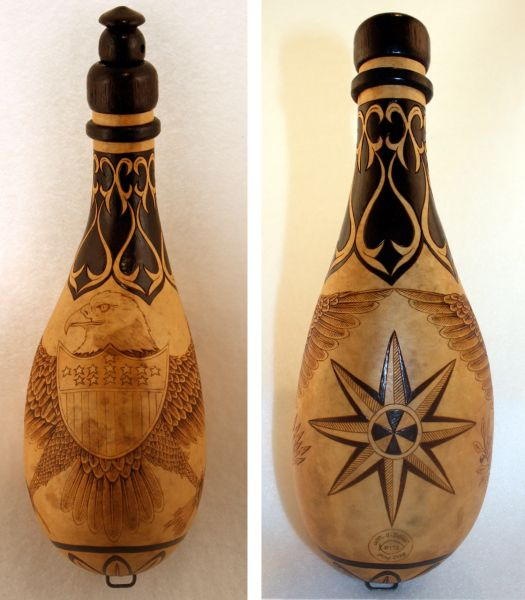 Evidently, powder gourds are quite robust.

Use of gourds in the past as powder horns was so common that there is a variety of gourd known as "powder horn gourds". PlantFiles: Gourd 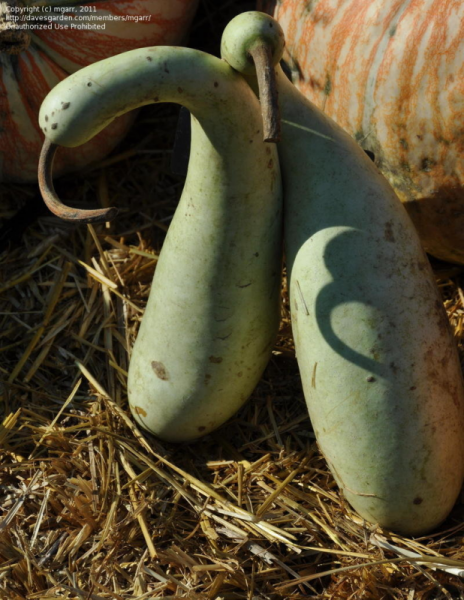 I just planted some gourd seeds a couple days ago.
I have a gourd canteen I made a few years back that works well.

I plan on using a small one as a priming horn...
S

smo said:
I plan on using a small one as a priming horn...
Click to expand...

They were also used for powder storage. From the Journal of William Calk, one of the first settlers on his way to the Kentucky frontier in March, 1775:

I used the tip end of a long-necked gourd to make a priming horn which I've been using for several years. 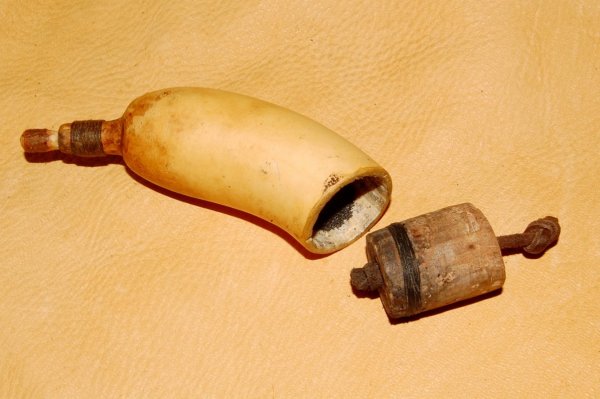 Gourds've been used for so many things over the millennia, I'd be surprised if no one'd done it.

People don't use their gourds as much as they use to. LOL

We think of horns or kegs, but they used bags and gourds a lot.
One of our members talked about how much leather folks used in the old days, that we tend to substitute a lot. I think there was a lot of things that were popular in the old days that we don’t see at events today.

As I said, and the o.p. indicated, plenty of evidence for the use in the period. But, other than Spence's priming horn, has anyone seen their use by reenactors?

Thanks Spence for the reference! It kinda’ answers another question I have been contemplating.... but that’s another topic.

BN, In my limited experience I have not seen gourds used for anything other than water containers or bowls at the events I’ve attended..

Gourds do make fine canteens and carriers for anything from corn meal to shot. They don't seem to be as common nowadays as they were in my youth. Bamboo is also excellent. I've made bamboo "horns" and powder measures from bamboo and river cane.
T

Smokey Plainsman said:
I’m not sure, but can’t recall seeing any originals, though I’m sure a gourd would deteriorate long before a cow’s horn.
Click to expand...

not if toy coat them when UBER DRY. they will last almost forever.
T

toot said:
not if toy coat them when UBER DRY. they will last almost forever.
Click to expand...

coat them with a spar varnish, or shellac. when they have dried. you see them in museums as water, shot and powder containerds.

I am not a reenactor. I've been to an event or two as a spectator, and don't recall seeing anybody with a powder gourd.

However, I've gotten the impression that a lot of reenactors may "latch on" to some trait or feature that was not very common (e.g. brass rings on hunting pouches) while ignoring some old-time practices that were actually pretty frequently encountered, such as powder gourds. It is my understanding that these were not uncommon, at least in the south.

We have two powder gourds in the family. I'm sorry I can't post pictures... they are at my brother's place. I'll try to get photos and post them, but I can't say when. Anyway, one of them is about the size and shape of a hundred-watt bulb, but with a smaller neck. It appears to be plugged with a cork, but it may be tupelo root. I recall my dad had a big chunk of tupelo root when I was a kid. It did indeed have a cork-like texture and weight, and I remember he told my it was used for many things back in the day, such as floats for bream fishing. This gourd is plain and unadorned, but it has a nice polish from handling and use. It was originally owned by my great-grandfather. Dad said G-grandpa's wife (Dad's grandmother) would borrow the powder gourd to use as a darning ball for mending socks! (Another lost art!)

The second gourd is one my dad grew when he was eight years old. He nailed together a small box of rough lumber, and placed the immature gourd in it while the gourd was growing, so it grew as a square-sided gourd which would stand up on a flat surface. If memory serves, this one was about six or seven inches tall and maybe 2-1/2" square in cross section. I think it has a stopper similar to the other one.

Dad was born in 1907, so this second powder gourd would date to about 1915. He grew up shooting muzzleloaders, and these guns were in common, if not general, use in the more remote areas of the deep south until well after WWI.

Like horn, gourds do not "sweat" with eposure to a rapid change in temperature. This is one of the chief complaints about metal powder flasks, in that the powder may become contaminated by condensed moisture if you bring a cold flask into a warm room. Gourds are not completely crush-proof (see Spence10's post #8, above), but they are surprisingly tough, and they are waterproof. They don't really need any kind of coating or treatment. They were used for storage of many commodities, and in fact, there is a favorite old-time fiddle tune entitled "Sugar in the Gourd." For that matter, large gourds were even used to make banjos. Here is a modern rendition of a gourd banjo from Jason Romero:

Mostly the French reenactors use gourds as water containers.
Since we are not allowed to carry more than two ounces of blackpowder in our powderhorns and that only for priming. Prerolled paper cartridges are used for the main blank charge, even for rifles.
Larger gourds might be difficult to use for emergency priming.
I have never seen a gourd used as a powder container in my 46 years of reenacting, not to say it hasn't been done.
That said, I like the idea.
S