appalichian hunter said:
Gunner, a MARINES best friend besides his rifle was hot sauce and ketchup, also if you had it a roll of regular T.P. that was a luxury, the paper in the rats was like wax paper with little wood chips in it.
Click to expand...

That same TP was found in the MREs , don't remember how many t-shirts I had with no no bottom sections.
I still keep my John Wayne handy.
Gunnyr

what about ELSIE? any one know where the name came from? a family member maby? and not a COW? although milk does come from a COW, among other animals! remember that a BLACK COW EATS GREEN GRASS & GIVES WHITE MILK! STRANGE, NO!!
T

WHY FROM PEAS of course.

Over the last few months I made 3 batches of fermented 4 pepper hot sauce. Easy to do. All ingredients from our garden, habanero, cayenne, cubanelle and jalapenos peppers.
Very tasty and warm.

toot said:
WHY FROM PEAS of course.
Click to expand...

I tried making my own by putting peas in the blender, but just wasn't happy with the results.
Maybe sprouting is the key.

I've had good luck making my own dry instant soup like Lipton cup of soup, but that's a bit different.
A

That's neat about the john wayne, the one I was issued at PARRIS ISLAND (play ground of the gods) when we went to Elliott's beach has traveled all over the world and now hangs on my key clip still works just as good as it did then. Best damn piece of equipment the Corps ever issued, it is just like the energizer bunny just keeps going and going.
T

I was in the ARMY in 1961and was issued a P-38, did the MARINES get issued one? for those non military a P-38 is a can opener that we carried on our dog tags, with an elastic band so it would not make noise so the DINK'S could hear it? just curious?
C

Stay on track guys.
A

Ok Carbon 6, but one last thing a p-38 is what MARINES call a John Wayne.
C 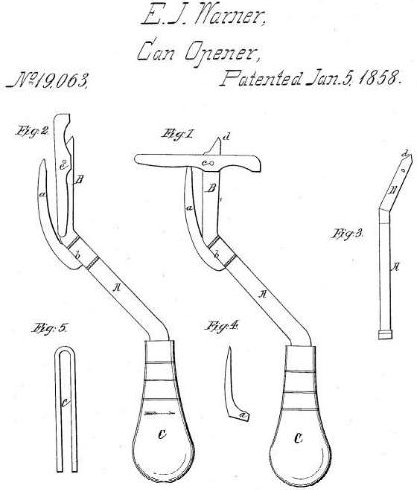 In 1866, J. Osterhoudt patented the tin can with a key opener that you can find on sardine cans.
The inventor of the familiar household can opener was William Lyman, who patented a very easy to use can opener in 1870. The invention included a wheel that rolls and cuts around the rim of a can, a design we are familiar with today.


It wasn't until January 24, 1935, that the first canned beer, "Krueger Cream Ale," was sold by the Kruger Brewing Company of Richmond, Virginia.

The P38 can opener was invented by Major Thomas Dennehy at the Subsistence Research Laboratory in Chicago in the summer of 1942.

Went into the army in 62. Never was issued a p38. They just came in the c rats cases. 5 or 6 to a case . Everybody got a couple over time. I got more than my share I guess and have them on vehicle key rings, plus some spares. I liked them and just kept them. Handy little devils.

mushka said:
Went into the army in 62. Never was issued a p38. They just came in the c rats cases. 5 or 6 to a case . Everybody got a couple over time. I got more than my share I guess and have them on vehicle key rings, plus some spares. I liked them and just kept them. Handy little devils.
Click to expand...

THEN a few years later they extended the device to now include a small spoon.
Don't know if it was a situation of "DUH" we should include a spoon on this tool, or "Dang, the civilians keep cutting their little fingers on the sharp edges of the tin cans." ....

I grew up military, in the Boy Scouts not only did we have Army pup tents, mussete bags, packs and sleeping bags, etc, etc, we had all the C-Rats a hungry kid could eat and we loved em.

Carbon 6 said:
Why did they quit making erbswurst ? because the company got sold.
Click to expand...

LOL no I meant I wonder why Borden's "portable soup bread" didn't seem to catch-on or stopped being made, as what is described seems much better than erbswurst. Erbswurst was stopped in production in the 21st century..., so it lasted far longer than the Borden product and that's IF Borden ever marketed it, beyond simply having the patent. Further the German Army was looking hard for an emergency field ration leading up to WWI and they settled on Erbswurst..., perhaps they were unaware of the Borden patent ?? ( I don't think a U.S. patent could be enforced in Germany back then....)