I have seen some historic rifle (possible) bags made from bear, ground hog, and deer pelts.

Has anyone seen any other animals used?

What are the disadvantages to using a pelt to make a bag? Versus using cow leather.

I am looking at river otter, fox, skunk, racoon, and beaver. Would any of these be a poor choice to make a bag?

I'm assuming you are talking about a shot pouch, something to keep the stuff you need to make your shot in. The title had me thinking at 1st that you were making a bag or case to put a rifle in, lol.

The biggest downside I can see to using fur pelts is durability, or the lack of it. The hairs on a a pelt are no longer being kept healthy and regenerating, obviously. They seem to get fragile and break or fall out. The hide itself will most likely stretch more than cow or goat leather. A fabric liner can help with this, but there's not a lot, if any, documentation for it, it is a common practice now.

I used to think often of using some type of hide with the hair still on for the flap to reduce the sound of brush scratching against it, but now I keep it fairly well tucked under my arm.
L

Had to check my notes. With the proviso that my interest is the trans-Mississippi west, and I didn't look at bags from the east, here's what I have for species used for hair-on shot pouches:
--slink
--calf
--goat
--bison calf (??--never been certain on this one; the color and structure of the hair was correct)
--bear
--horse/mule (not sure which)
--jaguar

Slink and calf were the most common, with about a 50/50 division on "whole bag" vs. "flap" coverage. Goat was a distant 3rd. Two bags that I thought might be bison calf were both from the same family, in Reconstruction-era Texas. One example each of bear (flap only), horse/mule (flap only), and jaguar (whole bag). IIRC, Stephen Austin was painted with a jaguar bag (whole bag), so that might add another example.

Pelts are really not heavy enough leather to make a durable shooting bag by themself. However, if your what to use a pelt for the flap it can be glued to a piece of 2-3 oz soft cowhide and trimmed on the edge with piping. This would be for lightweight pelts such ad beaver, fox, coyote, etc. The only hair on hides I've ever used that is heavy enough by themself is bear and buffalo.
I'd avoid using deer because the hair is hollow and break off very quickly.

Hair on calf is in one of the museum of the fur trades bag and was a commercial made bag. Remain popular as a vest so 1959s tc cowboys seemex to always have a mat least one cowboy in such a vest
Sporrans were often fur on. Desmond Morris spent some time talking about that in one of his books. And the Great Lake otter was very common for pipe bags and medicine bags
L

LongWalker said:
Had to check my notes.
Click to expand...

Sorry, didn't get back in time to edit my previous post. For about 25 years, one of my hobbies was visiting museums and collections in the western half of the country to see bags and horns with a history of use in the west. All of the bags mentioned are in public or private collections west of the Mississippi.

It might be worthwhile to add that most of the slink/calf/goat bags were machine sewn commercial bags, so certainly dating post-1845, and most-likely post Civil War. The horse and jaguar bags were machine sewn but it is not known if they were a commercial product, made to order, or homemade. The bags with flaps covered with bear, horse/mule, and suspected buffalo calf were all commercial machine-sewn bags that had flaps added or covered by handsewing; the bear bag is known to date from the 1880s.
A

Harry Marinakis said:
I have seen some historic rifle (possible) bags made from bear, ground hog, and deer pelts.

Has anyone seen any other animals used?

What are the disadvantages to using a pelt to make a bag? Versus using cow leather.

I am looking at river otter, fox, skunk, racoon, and beaver. Would any of these be a poor choice to make a bag?
Click to expand...

Groundhog home tans out to a very durable leather, but recommend removing the hair, as it is very thin and course. It seems to have seen use in the Eastern Woodlands.

What's a slink? Do that really be a skunk?
L

"Slink" is the skin of an unborn calf. Usually sourced from calves found while butchering.
L

Harry Marinakis said:
What are the disadvantages to using a pelt to make a bag? Versus using cow leather.

I am looking at river otter, fox, skunk, racoon, and beaver. Would any of these be a poor choice to make a bag?
Click to expand...

I have a bag made of racoon. Had it for decades. When I was much thinner, I used it when I did Native American. It's still good to go.

Racoon, beaver, fox, skunk, otter, even muskrat, are money making pelts today. Were they so in the era that you intend to do? On the other hand you don't have to actually do an era. IF they were money makers in your era, was your persona successful enough to use one for a pouch or a hat instead of selling them?

In the 1786 painting Death of General Montgomery, you can see a civilian in a fur trimmed hat, AND apparently some provincial regiment in brown coats with red facings, and fur trimmed hats.... I wish I knew who they were.... 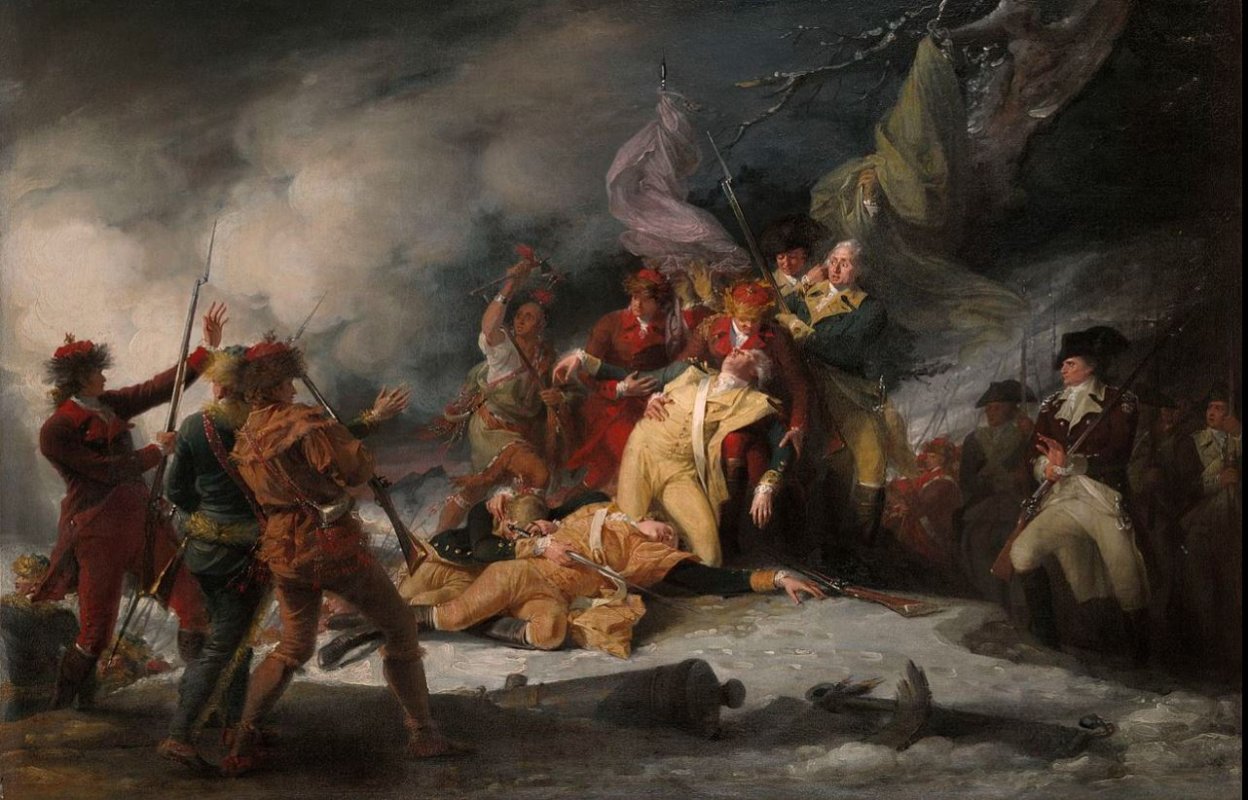 So there are a lot of different uses for pelts.

Germans apparently liked or like deer-claw hunting bags. So you can apply a pelt to a portion of the bag as well.... 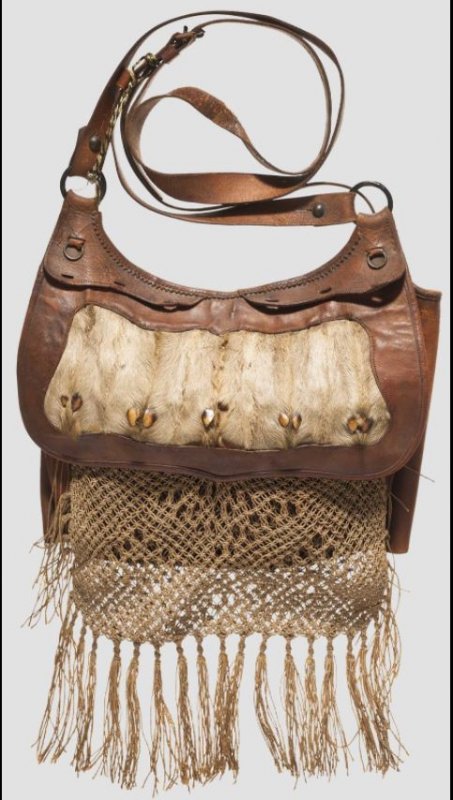 Or the "insert" could be just plain hair on leather.

LongWalker said:
"Slink" is the skin of an unborn calf. Usually sourced from calves found while butchering.
Click to expand...

Thanks never heard that term before

Well they told me that buckskin could not be used as "it stretches too much" and they told me Groundhog was a bad choice as it's not tough enough like cow or goat. They told me that a fur on bag is a pain to use, especially with the tail on.

So, I made this one. Used buckskin lined with pillow ticking and Groundhog (only the front panel is lined with ticking). The strap is also buckskin folded over medium weight canvas.
I have had it now for about 5 years and have not had any stretching issues, it rides well for my needs, the hair has not at all been an issue (different furs may shed different). I love it.

One can use just about anything, just reinforce were needed, plan it out, think long term. I have also seen some great leather and even cloth bags that sport fur 'inlays', I would like to try one some time.
I have some Sealion hide someone gifted me, still thinking for just the right project to use it on

I found a fawn hide in a flea mkt.. Passed it on to a very talented leather worker friend and he used the hide on the flap of a larger shot pouch. It was excellent. My friend made me a "hair on" , bear hide shot pouch. I couldn't bring myself to wear it in the woods hunting with fear of drawing fire from another hunter. That was 20 yrs. ago , and have used only plain leather pouches....oldwood
H

Thanks for all of the information. Turns out that my request for information was OBE - a friend gave me an old shooting bag, so I don't have to make my own.
Last edited: Sep 13, 2021
H

This the bag before I cleaned it up
I was hoping for a period look from Virginia c. 1800
Does this bag fit the look? 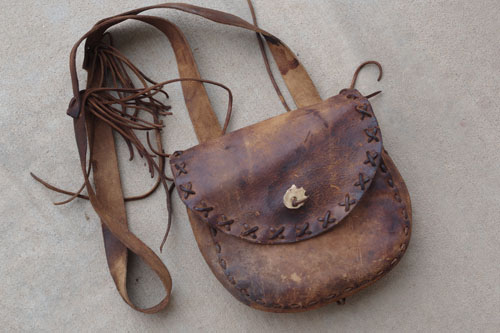 Harry Marinakis said:
This the bag before I cleaned it up
I was hoping for a period look from Virginia c. 1800
Does this bag fit the look?

Shape looks fine, tough to judge size from the photo but most likely fine. Lacing for construction, not so much for 18th century, but, it will do the job.
The button? Well, bone or metal would have been more common, and, a proper antler button is actually cut the other way. While it is easy to slice rounds of antler and poke some holes through the pithy center to stitch it on, this is weak. Should be cut so the outside of the antler becomes the face of the button, and most likely would have the dark rough outer surface cleared away, almost looking like bone.
Either way, looks like a good bag and how much these details matter is mostly up to you, as long as you are aware of them.
Around 1800 a lot of things start to change, and change rapidly. Clothing and hat styles, gun and shot pouch styles. Oddly rifle calibers start getting smaller and shot pouches seem to start getting bigger.
Last edited: Sep 13, 2021
You must log in or register to reply here.
Share:
Facebook Twitter Reddit Pinterest Tumblr WhatsApp Email Link