To get started, I wasn't sure what forum category this fit under, but hopefully this one will work.

Now that that's out of the way; I'm just about to pull the trigger on a Pedersoli SxS but just wanted to do a little homework before I dive into it.

I'm no stranger to BP, but this will be the first time I will be using it primarily for hunting (upland game, dove, duck, etc.) With all that being said, I'm looking for some help with the following:

1. Can anyone recommend a good starting point for loads? I'm hoping to use this summer to dial in a good pattern prior to quail and dove season in the fall.
2. Are there any concerns with the first shot dislodging the load in the second barrel?
3. Any good process or tricks for not double loading a barrel? Maybe a plug on one while I load the other? Or is it simply just a matter of making the loading process a habit?
4. Lastly, how do the other hunters here carry their rifles/shotguns/pistols? What I mean is do you carry it loaded with a cap at half-cock? I've never particularly trusted something half-cocked and always carry my pistols with the chamber against the hammer empty (for both BP and cartridge.)

I know that's a ton of questions to get started, but would really appreciate some advice moving forward.

I have a sxs CVA 12 gauge percussion I bought years ago. I am not an expert but I can tell you where I started and what I do.

First, a great reference in the back of the Dixie Catalog. starting loads, patterning etc. are in there.

I use 13 gauge wads. they go down good and I do not have shot two move at all from shot one. My barrels are not choked.

I load each step in both sides left-right: powder - powder etc.

This is making me want to get out there...
Have fun.

Thanks for the quick response Traveler! Good info! Appreciate the advice
O

There are a million combinations of powder, overpowder wads, cushion wads, lubed wads, overshot wads, etc.etc. Search the Smoothbore section for examples to try. Pedersoli's usually come right barrel- cylinder, left barrel- modified, but they vary quite a bit, so you should measure your cylinder bore & get the appropriate diameter wads. My twelve gauge measures the correct .729" & I use standard 12 gauge wads. My 20 gauge measures .625", not the correct .615", so I use 19 gauge wads for proper fit. The choked barrels will vary quite a bit as well. My 20 is choked down the amount a modified choke would be, but my 12 is choked down to between an improved-modified & a full choke, which makes it difficult to load. I have to start the wads at 90 degrees till they are past the choke then flatten them to the bore before ramming them down. Best to keep things as simple as possible if you are going to be loading in the hunting field. I just use pierced overshot cards for everything. Several over the powder, then add shot, then one over the shot. Some loads I use a lubed wool felt wad between two overshot cards on top of the powder. Just have to experiment, but a good place to start is with equal amounts of powder & shot, by volume. Increasing the shot or decreasing the powder will generally give you tighter patterns. If you are worried about the second barrel load shifting when firing the first, put two overshot wads over the shot & make sure they are sized at least .010" over your bore diameter. Good Luck!!

Once I dump powder in I only start nitro card and wad deep enough to allow for shot and overshot card and then run the entire thing down as one to avoid airlock. When hunting it’s carried capped and fully cocked just like a modern shotgun. Finger out of trigger guard and pointed in a safe direction. I don’t see why it would be different than a modern shotgun. And no I don’t believe in safety’s and don’t use them, probably more accidents happen with them. You all have heard the old “I thought it was on safe” safety is muzzle controll.

bacarper said:
...
2. Are there any concerns with the first shot dislodging the load in the second barrel?
3. Any good process or tricks for not double loading a barrel? Maybe a plug on one while I load the other? Or is it simply just a matter of making the loading process a habit?
...
Click to expand...

2. Yes, there are concerns with the first shot dislodging the other load.

One way to determine if the load is dislodged is to have your ramrod marked to show a line where a loaded charge would lift the rod. After firing the ramrod is dropped down the unfired barrel. The mark will let you know if the charge has moved. If moved reseat the load. Do remove the cap before reseating the load.​
3. There are a few tricks to keep track of which barrels are loaded. A visual practice is the best. Its not a good practice to rely on memory.

You now should have the ramrod in the unfired barrel. Use the unfired barrel as a storage tube while you load the fired barrel. The mark will always give you and indication that the barrel is loaded. When the barrel is loaded, return the ramrod to its under barrel location and you can cap for the next shooting opportunity.​
Take a visit to Bob Spencer's website. Black Powder Notebook. Bob is a contributor on this Forum using @Spence10. There's a lot to read on his site and he includes a lot of very good information.

Tons of great responses, thanks again for all the help!
T

For chasing rabbits out of the garden and tracking them and partridge down on the back 40 I use 70 grains of FFg under 1 1/4 ounces of lead shot.

Generally I carry mine on half cock with the caps on. Cocking the hammers has become part of my routine motion in shooting.

Speaking of routine, when it come to loading, find a routine that allows you to see which barrel is already loaded and stick with that routine, whatever that may be.

Hickok45 on YouTube has some great videos on the Pedersoli muzzleloading shotguns.
J

Upon receiving a sxs muzzle loading shotgun make sure you pattern it at 25-35 yards. Barrel regulation would then be checked. The "square" load generally works well. Two and three quarter drams of powder and an ounce and one eighth of shot is a good to start with in a 12 ga. Having a dipper with those dram and ounce markings helps. Set the dipper at and ounce and an eighth and you are set with two and three quarters drams as well. Recommended loading procedure is to put powder down both barrels, an over powder wad, half of a cushion wad, shot, and over shot wad. Think about loading when in the process to insure doing such properly. Distractions can confuse the process. Make sure half cocks hold solid for hunting. Check now and then to insure a cap has not fallen off the nipple. One can keep caps on by squeezing them a bit before application. Patterning is good so you know where the gun is shooting with each barrel. Loads can be varied for hunting and target purposes. Concentration on loading will keep one from being distracted, hence making an error. Being safe in hunting and on the target range is a good way to go.

For those who don't know what a dram of powder weighs, it weighs 27.34 grains.
That makes jlatz's suggested powder load weigh 75.2 grains.
A "square" load is a term used to describe the ratio of powder to shot and if a "square load" is used, the same measure that is used for the powder is used for the shot.
In other words, use a 75 grain powder measure. Fill it with powder and dump it into the barrel. Then, after the overpowder wad is inserted, use the same measure for the shot.
L

I use a Pedersoli 20 gauge caplock SxS.
So first when loading I use two different cartridges made of paper. The first is a powder cartridge of 2½ Drams of 2Fg. It is inside a book-paper cylinder, and the powder is dumped down the barrel, and the cylinder that is now empty is crushed and inserted down the barrel, then rammed down to form the wad. Following that a second cartridge of newsprint containing the shot is rammed down intact. I use an ounce of shot. 7½ is one of my favorites.
First one barrel is fully loaded, then the other. The ramrod is marked with lines so that I can see if the powder is there alone, or if shot has been added. Then I load the remaining barrel.

IF I was to try and wait until I see game to cap the nipples....that's all that I would be doing...seeing game, not bagging any, nor shooting.

For hunting with my 12 gauge I'm doing it all wrong for over 40 years. I vary the load to suit the game but loading is done the same. I charge both barrels with a flask then place plastic Remington RPA wad in the barrels then seat them on the powder. Each barrel is charged with the preset shot flask and a over card that is nitro card split in thirds is rammed down. Capped and set the hammers at half cock and I'm ready. I never load one barrel so after the second shot the drill is repeated. Mistakes are avoided and no danger of messing with caps on the nipples. Loads don't come loose and this works for a full days hunt. Cleaning is with plain soap and water and the plastic comes out in very thin sheets. I haven't used a brush yet. Oil of coarse as with any gun cleaning. Simple and common components allows more hunting or shooting with out a fuss. 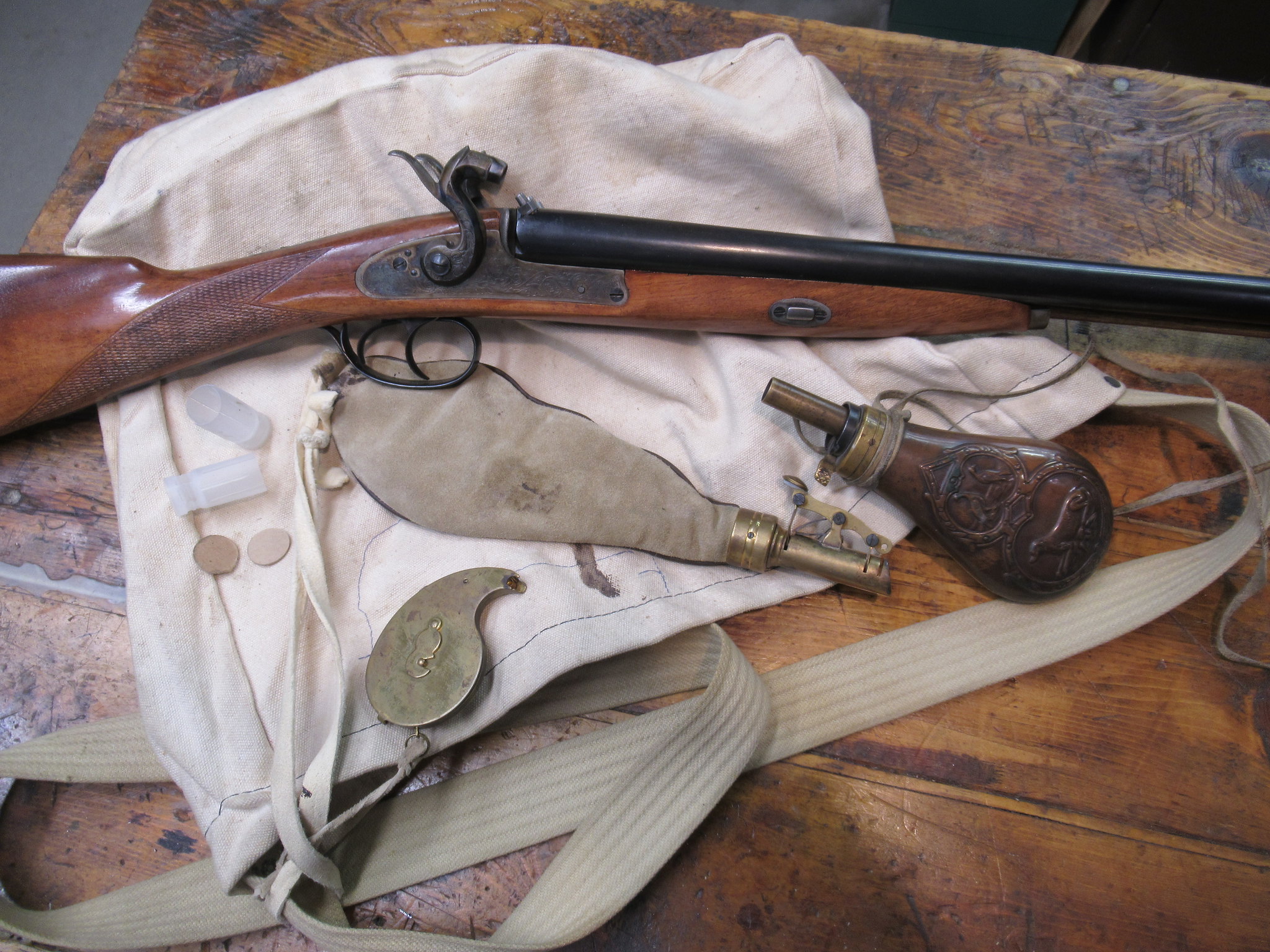 I have a sxs CVA 12 gauge percussion I bought years ago. I am not an expert but I can tell you where I started and what I do.

First, a great reference in the back of the Dixie Catalog. starting loads, patterning etc. are in there.

I use 13 gauge wads. they go down good and I do not have shot two move at all from shot one. My barrels are not choked.

I load each step in both sides left-right: powder - powder etc.

This is making me want to get out there...
Have fun.

I also have a cva double barrel 12 . for thee expert on muzzleloading shotguns , look up v.m. starr.
B

Really appreciate all the great advice! Just stumbled on the insightbb and V.M. Star websites too.
B