P.S. The Victory at Saratoga meant a lot of captured "up to date" British Military Arms were then used by Americans as well.

I like your display and your idea regardless of what others say. :thumbsup:

sidelock,
Thanks, we are all entitled to our own opinions, another reason for the flag...........our freedom!
Flintlocklar :wink:
C

It is a very nice "nostalgic" display...

Now that we've discussed the gun....
Anyone want to discuss the historical accuracy of the flag?

Like many Revolution era flags, the Bennington features 13 stars and 13 stripes, symbolic of the 13 American colonies that were in a state of rebellion against Great Britain. The Bennington version is easily identified by a large '76' in the canton, recalling the year 1776, when the Declaration of Independence was signed. Another distinctive feature of the Bennington flag is the arrangement of the 13 stripes, with white being outermost (rather than red being outermost as in the current flag). Also, its stars have seven points each (instead of the current five) and the blue canton is taller than on other flags, spanning nine instead of seven of the thirteen stripes
Flintlocklar :wink:
C


Before we get too concerned about the design of the so-called "Bennington Flag" please note that the actual relic flag is on display at the museum in Bennington, Vermont. Grace Cooper, NAVA member and former curator of textiles at the Smithsonian Institution has observed this flag at close range and is of the opinion that its material was woven on a power loom in the early 19th Century. There is no record of this flag or its design prior to the late 19th Century when it was on display at the Chicago Public Library.
Click to expand...

There is definitely no contemporary reference to a stars and stripes flag of any design carried at the Battle of Bennington. (The Bennington Museum does have the remnant of a green silk flag with a blue canton. The canton has 13 stars in an irregular pattern. It is known as the Green Mountain Boys flag, and there seems to be no dispute over its claimed use during the 1770's.)
Click to expand...

Flintlocker, I'm reading a good book about the Revolutionary war, and I ran across a passage I thought you might enjoy hearing. Describing the runup to the battle of Long Island, the author says:

"Two of the best units in the Continental Army manned this important position. The First Delaware Regiment, under Colonel John Haslet, was the largest battalion in the army, eight hundred men outfitted in identical blue coats with white waistcoats. Colonel William Smallwood had recruited his First Maryland soldiers from some of the best families in Baltimore. The men of both units carried good English muskets fitted with bayonets."

In my little man cave I have a book case with one of those cheap tower pistols a glasses case with one of my out fit glasses in them, a candle lantern, ink well with a quill in it and a non fireing sort-a-looks like a highland pistol wall hanger my daughter got me for a birth day present.
It’s not an historic display. It’s an old timy display. We’re not always HC, sometimes were just fun.

British Arms that came from Colonial Armories, or commercial examples made by the same gunmakers who made British Ordnance Approved Arms were used by Americans in the AWI.

As I pointed out, the flag is very post AWI, so the display could "work"..., plus there were plenty of Colonial Americans who carried variations of the Bess..., some were militia (Maryland had more than 1000 British muskets at the start of the AWI) not to mention the Colonial Americans who wore red or green coats and fought FOR His Royal Britannic Majesty, King George III.

"not to mention the Colonial Americans who wore red or green coats and fought FOR His Royal Britannic Majesty, King George III."

Just how did I expect you to add that in? :rotf: :hatsoff:

The Americans who flocked to British colors were fighting fo all those things I hold mostly sacred. Loyalty to ones nation, rule of law, economic stability.
I side with the patriots but recognize they were temporarily traitors. They didn’t stay that way of course....
“Treason never prospers, for if it does none dare call it treason”
I could never cough up rage against the loyalists.

Can I ask just why is it wrong? It is my house and my flag. I am not teaching history, just presenting flag and a Bess for my country. If you like GB, fine your choice, I like America
Thanks for the input though
Flintlocklar
Click to expand...

I fly a Bennington daily at my home. And, I have a BB on the wall in my poor excuse of an office. Both will remain until after I have kicked.
S

Colorado Clyde said:
. . . but I'm confused. Brown Bess was the British arm in AWI, and as far as I know was never issued to Continental troops. Why is its display appropriate to celebrate our country?
Click to expand...

The French eventually brought some old Charlevilles (NOT the 1777 for our use - they used those) but we did it with what was available, for the most part.

I love it! I hope to get a Charleville for SAR re-enactments some day now that I'm retired.
R

Well, it's still a nice display. And, an interesting conversation. Just learned some great stuff here.
Now we need a photo of a Charleville and a Dutch musket. Here's the M1757 Spanish Musket. LOL 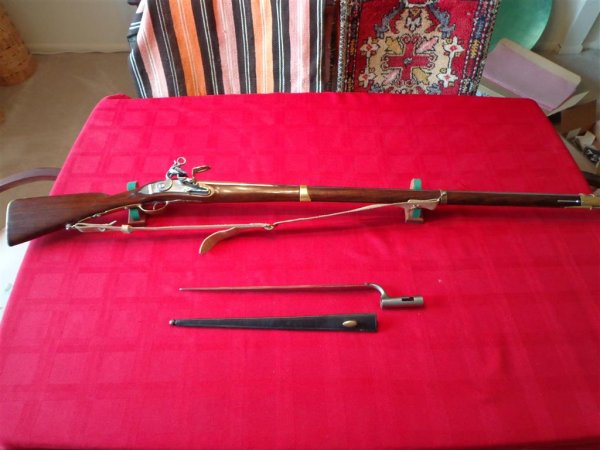 rickystl said:
Well, it's still a nice display. And, an interesting conversation. Just learned some great stuff here.
Now we need a photo of a Charleville and a Dutch musket. Here's the M1757 Spanish Musket. LOL