I finally happened onto a new to me Paterson for the collection!!! Now I need a Root!!! 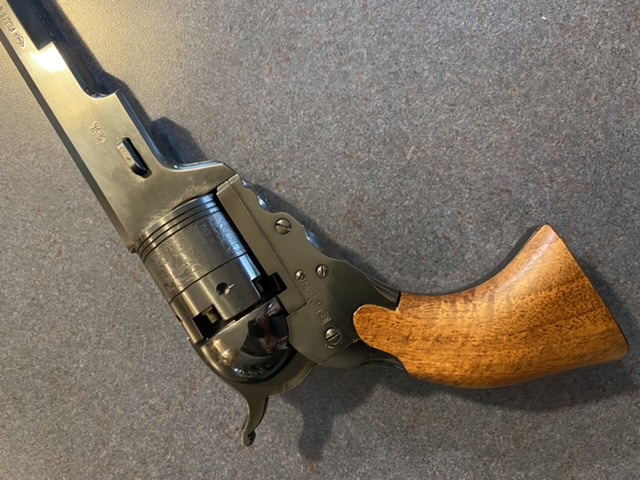 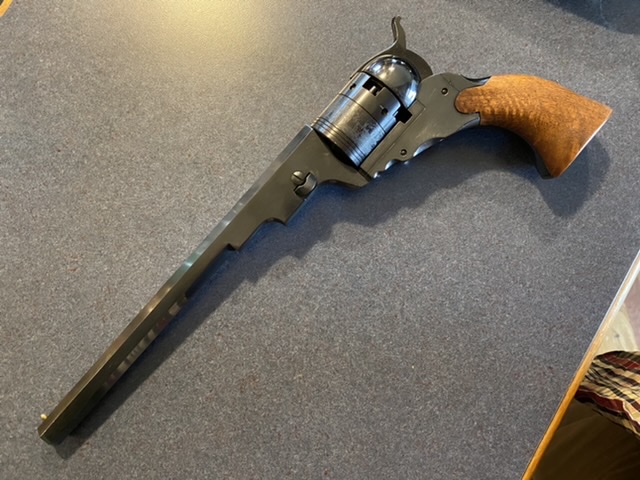 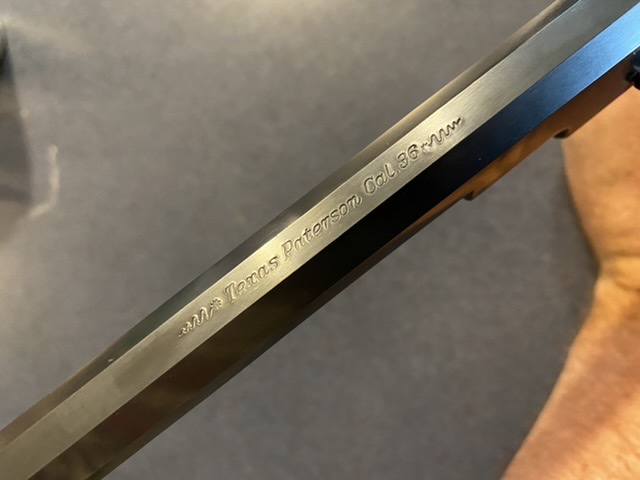 Nice gun.
I always wanted to own a reproduction Paterson but they were always priced out of my price range.

I strongly suggest that you don't try to take your Paterson apart beyond removing the barrel for cleaning. They have a lot of parts inside the frame and can be difficult to reassemble.
C

Nice! I picked up one NiB maybe five years ago, one of the cased ones. Sadly, I still haven't fired it yet. Sometime...

Oh, and Lodgewood has a M1855 Colt Root 3rd Model Revolver for $1300. Since you mentioned wanting one.

There’s just something about those Paterson revolvers...

The Paterson is a gem. 184 years old and 5 shots of .36 with an accurate fixed barrel back then was a game changer.

I like that! Most BP pistols just don't interest me, but the Paterson I do like! I believe that the TX Rangers used some of them in "Indian fights"?
Thank you for posting and now, they're gonna come "out of the woodwork".

Here are pictures of mine, along with a holster I made for it. I bought the gun sight unseen from a fellow who said to not expect much. He said the barrel was an improperly fit replacement, and it was worn out. The gun was filthy when I got it, especially the bore. Imagine my surprise when I pushed an oiled patch through it and discovered it was like new, and then noticed the numbers on the barrel matched the numbers on the frame! I don't think the gun had ever been fired, other than some clown dry firing it and ruining the nipples, but that was easy to fix.

The Paterson Model was the first black powder gun that really grabbed my attention, but like a poster above noted, the price they fetched was always more than I was willing to pay.

my dream is have a patterson like that and they make a conversion cylinder for it. some were converted in the old days so it has been done. to me the looks of a patterson is the best their is in design. thanks for the post and the pictures.
C

P.S. their was a movie when i was a kid in the 50/s about a farmer youth who/s family was harrased bad by cattle men. he learned how to use his dads patterson colt to where he was very very fast and good with it. when it came to a show down he took out 3 of the bad guys in a very fast order and the laughing stopped at him using a pattrerson colt. ive wanted one ever since i saw that movie and im almost 80/s years old now, still want one. his was a conversion patterson. what a gun.

We don't talk about conversion cylinders on the Muzzleloading forum so hopefully that subject will be dropped and we can get back to talking about the Paterson.

FiremanBrad said:
I finally happened onto a new to me Paterson for the collection!!! Now I need a Root!!!
Click to expand...

Good for you, FiremanBrad! Looks like you got a nice one, with pretty wood in the stock, too. Let us know how it shoots!

The Paterson’s Colt’s is an ideal sidearm. Carries 5 balls and sends them rightly, much better than a pepperbox.
W

The Patterson Colt was really a proof of concept gun. Yes ta Texas Ranger used them to good effect at the battle of Enchanted Rock when John C. Hayes held off a Comanche war party with a pair of them.
Practically they are fragile, complex, and more of a curiosity than anything.
But they are historic and uber cool looking.
Cordially
Bunk

My Colt Patterson replica is as reliable and accurate shooting as any of my black powder revolvers. As far as being fragile, I have never had any mechanical problems with mine. The only real drawback to them is that they are sl-o-o-o-o-w to load.
J

wb78963 said:
The Patterson Colt was really a proof of concept gun. Yes ta Texas Ranger used them to good effect at the battle of Enchanted Rock when John C. Hayes held off a Comanche war party with a pair of them.
Practically they are fragile, complex, and more of a curiosity than anything.
But they are historic and uber cool looking.
Cordially
Bunk
Click to expand...

There ain't no Patterson
The name was & is Paterson, after the Paterson, NJ, factory where the Colt designed guns were made.
And Sam Houston had a pair of them with him at San Jacinto, where Texas won her independance from Mexico by beating Santa Anna in a very short battle.
F

finally happened onto a new to me Paterson for the collection!!! Now I need a Root!!!

Well dog my cats sir, I learn something new every day.
My apologies and thanks for a proper correction.
And we Texans do still remember the Alamo and remember Goliad.
But it still is a proof of concept gun really nifty but complex.
Respectfully
Bunk