2019 has been a crazy one! My job is moving me this summer back to Nevada and the Spring snows have made doing anything productive, to get ready for a move, difficult to say the least. Not to mention find time to scout for Public Land Turkeys!! I Normally hunt in my “Old Timey” clothes with my flintlock, but my tote of stuff got moved with the first load of stuff we took last week!! Thankfully my tote of regular camo and hunting gear was overlooked!

Opening morning found me on a ridge top in the high desert Ponderosa Forests of Central Oregon in the predawn light, sweating and out of breath. The late Winter Snow dubbed Snowmageddon, left most of the public turkey woods inaccessible by any kind of mechanical mode of transportation. What little preseason scouting I did, told me I needed to hike at least 1.5 miles past the drifted snow to get to this spot.

I awoke extra early, accounting for the extra hike time and now stood at the edge of a beautiful meadow awaiting the chorus of gobbles from the 3 long beards 4 jakes and half a dozen hens that I thought would be roosted on the ridge to the North East of my position. I owl hooted... Nothing!! I owl hooted again... Nothing!!! I owl hooted a third time... two local owls hooted back, but no thundering chorus of gobbles!! I waited a few minutes and let out the most seductive good morning yelps I could muster from my slate pot... Nothing!!

My previously scouted birds were gone!! I slowly searched for any sign of them but found mothing. Not a single track in the soft spring mud, not a single pile of scat. Nothing! Not to be discouraged I started walking the ridgeline, skirting large patches of crunchy snow. Every so often I would stop and listen, and call longingly on my slate call. Nothing. After 3 hrs and almost 2 more miles according to my GPS I stopped and called for the umpteenth time. On the edge of my hearing I heard what I was searching for!!! A Gobble!! Praise the Lord!!!

I slowly but as quick as possible I closed the distance. I did not need to call, this gobbler was hot and gobbling like crazy, which made pinpointing him easy! I closed into about 100 yards of where I figured him to be and found a small clearing on what was once an old logging road. I set up my hen and jake decoy and put myself 25 steps between the Tom and the dekes, figuring if he hung up 50 steps out I would still get a shot!

I sat down as he gobbled his location! I readied myself for the show and seductively yelped at him and he gobbled again! Mere seconds later I saw his fan with sunlight shinning through it exactly where I expected him to appear. My heart raced as I could hear him drumming and spitting as he closed the distance to me. At about 30 steps, he stopped and streached his neck when he spied my decoys. He gobbled in defiance of the young jake courting the hen and went back into full strut!! As he passed 10 steps in front of me I shifted my point of aim as he went behind a large ponderosa. I putt at him to get him to raise his head. As he stretched his head to gobble I squeezed the trigger. The rock struck the frizzen, sparks danced across the pan… No flash… No Boom… I quickly pulled the cock back again, and Pulled the trigger with the same results.

As I pulled the cock back for a third time and pulled the trigger. I saw the sparks hit the pan again and as I pulled up the smoothbore to check the pan the unmistakable sound of blackpowder substitute fizzed and flared and the muzzle belched smoke over the gobblers head!! He ran off confused at the huge cloud of smoke unscathed! I sat for a few moments confused myself at what just happened.

As I reloaded my fowler, I pulled the small tube of powder from my pocket to reprime the pan and noticed it was not the tube I expected to have. It was my buddies speedloader with Pyrodex!! In my predawn rush I grabbed the wrong tube from my shooting box. The one I had readied looked just like the one in my hand, but mine was full of FFF! I pulled one of MY 70 grain main charge speedloaders from my vest and used it to prime the pan.

I yelped seductively hoping for the best, and to my surprise he responded, but his gobbles only got further away! Just like that, he was gone!! I hunted the rest of the day uneventfully. No gobbles, No tracks, No Sign!! I spoke to three other hunters on my drive out who had not even heard a gobble. I counted myself lucky to have had the experience I had and thanked the good lord for the blessing!

The next morning as I brushed my teeth to get ready to go to work, my beautiful wife askes, “I thought you were going hunting again today?” I told her All the places I had figured to go were still under snow, except for one area 3 hrs away, and I had not had a chance to scout it. She said, “Well you are not going to kill a turkey at work!” Boy Do I love that Woman!!

Three hours later, at 9:30, I pulled off the forest road and stepped out of my rig. I let the forest settle a bit and yelped as loud as I could with my mouth call, hoping to get a gobble. Nothing. I repeated this for the next hour as I worked my way up the Forest Road. Stop, Wait, Call, Listen, Nothing. When I came to what looked like an impassable snow drift, I parked my rig, got out and went to inspect the barricade. It was indeed impenetrable with the rig I was driving with several small drifts beyond. I walked around the first drift to be stopped by a double gobble!

It was still several hundred yards up the road so I quietly ran back to my rig and got my stuff. Every little while the gobbles would break the silence, each time a little closer! I moved up the road to get away from my rig worried the toms would see it. When I was as close as I dared get, I fumbled with my decoys, but was out of time. I dove into the bushes as two longbeards came into view 80 yards away, throwing my decoy into the brush as I did. Two longbeards were strolling down the road crossing snowdrifts and gobbling. I knew they were mature birds as they came towards me, I could see their beards swaying as they walked!

My heart raced as I mentally measured the distance! Casually they came, walk, strut, walk, strut! 80, 70, 60, 50 yards! Suddenly they came out of strut and began to putt! My only thought was that they had seen my rig. They slowly started to circle my position but they were still 50 yards out and not getting closer. When they went behind some pines, I shifted my point of aim and yelped softly with my mouth call.

Much to my joy, the larger Tom changed course and started to come my way. Still ever so cautious, he searched for the hen he heard. Still not coming straight at me, but circling my position. When he went behind another pine tree, I shifted again. To my surprise when his head popped up, he was within range and right where my muzzle was pointed! I squeezed the trigger, the cock fell, the flint scraped the frizzen, sparks fell and the ignition and boom were instantaneous! Through the cloud of beautiful white smoke, I could see the Tom flopping on the ground!

The surviving Tom gobbled in the trees. As I jumped up to keep my bird secure, I saw the other tom fly off the ridge! WOW what a Day!!! Thank you Lord!! As I stepped off the distance of the shot at 26 paces I saw what alarmed them. My jacket was laying in the road, with the white tag that shows the size flapping in the breeze. It must have fallen out of my vest when I was fumbling for my decoys.

This was the first blood for my new fowler. I finished it last year but had not had much opportunity to hunt with it. I christened her “Thumper”! When I do my part, She will Thump anything out there! My prize had an 8 1/4 inch beard and 15/16 spur on the left and 7/8 spur on the right! He did not weigh as much as other birds I have shot, the winter had been long with many places still under snow and the green up coming slow. In fact as I walked back to my rig it began to spit snow. 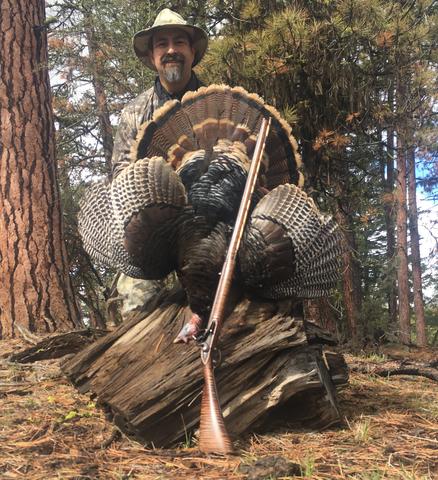 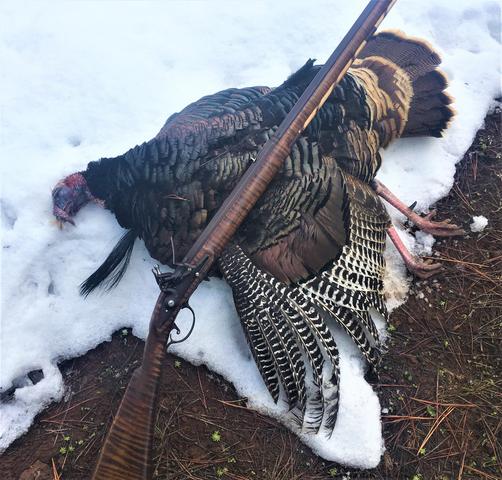 When I got to the edge of the forest, as I drove home I stopped on a hill to text my wife the good news. I looked back and the ridge I was on just an hour earlier was engulfed in a snow cloud!! What a crazy Spring!

You must log in or register to reply here.

Had a pretty good weekend in the turkey woods