I got a line on buying a M1842 Cavalry .54 Cal Percussion Pistol by I.N. Johnson, which is dated 1854 from Middletown, Ct. The seller is a long time friend that I know well and was told its all original and the bore is even in very good condition. Just asking here on opinions should I or shouldn't I go ahead and adopt this pistol I do want to shoot it as I am not into just having wall hangers? I am a newbe regarding the older firearms as I do love them and love to shoot them too. So I'm seeking a bit of advice, I can get this pistol for $700. I already got from him a beautiful 1863 Type 2 Springfield Rifle that is in fact all original in excellent shape and I have even shot it a few times.

I prefer flintlocks, but would definitely bring this gun home.

Good price, get it.

I'm not an expert on this or much of anything else, but I'm interested in these pistols and hope to eventually acquire one. The fellow you want to talk to is forum member @Smokey Plainsman . He had one of these and wrote it up here on the forum a while back. That's his story, though, and we will let him tell it.

There was a great, short article on the U.S. Model 1842 Percussion Pistol in the November 2020 issue of The American Rifleman, in the "I Have This Old Gun" column. Click the link and it will take you to the article online. The one they reviewed had damaged markings and a battered nipple but was otherwise functional and mechanically sound. They said it would be worth $550 to $650. In similar condition but with legible markings, it would bring between $850 and $950. Based on the information I have, your friend is offering you a pretty good deal. I do see a crack in the stock in the panel opposite the lock, but this should be repairable and the gun would likely be okay to shoot, anyway. Markings are damaged but generally legible. Otherwise, the gun appears to be in very good shape.

As for shooting that beast, Mike Cumpston did a field/range test with an original and wrote it up here: Web Blast: The Aston/Johnson Martial Pistol of 1842. Mr. Cumpston is an accomplished pistol shooter and "gun writer," and he did a good job with this report. One thing to consider, as Mr. Cumpston pointed out, is that this is a pistol intended for use on horseback. You don't want a hair trigger on a pistol if you're perched on the hurricane deck of a dancing war pony. Mr. Cumpston's pistol had about a 15 pound trigger pull, which is evidently normal for these guns.

The photo above, courtesy of the NRA, shows how the pistol is put together and reinforced. There are a lot of them still out there, probably because they were built to take some abuse. The butt is reinforced front and back so the weapon could be reversed and used as a club after its single shot has been fired.

So, it looks like your friend is offering you a good deal on an interesting, fun, and historically significant old gun. If you have the money, I don't think you can go wrong. If you decide to pass on it, I would be interested.

A popular pistol for the N-SSA smoothbore matches. Go for it!

The only possible problem with shooting it, provided the barrel is in good condition is, something might break.
The most likely thing to break is the mainspring and finding a replacement might be a bit of a chore. Other than that, these pistols were very robust.
H

buy it and fire away!

Thanks guys for the suggestions. Im going to get it and should have it in my hands by June 15th. Time now to order some lead balls. What I do like it uses the Musket Caps, which I have a load of for my 1864 Springfield. I will be posting some pics shooting it.

Did some more checking it is definitley all original with all the proper stampings and its the Ira N Johnson made versions when he took over the production stamped 1854 in Middletown, CT, its one of the 10,000 made during 1853-1854. Tough time finding .530 lead balls, but finally got them, and the patches. All set just waiting.... her place will be beside her older sister (1863 Type 2 Springfield) on the wall.

Did you notice "STEEL" on the left side of the breech? I examined a couple at a show recently by Aston and didn't see the STEEL notation. I got one a few month's ago by the same maker as yours, dated 1853 and is marked "STEEL" . Just found a .530 mold on the NSSA site so as soon as it's in my hot little hands I'll run some ball and shoot mine too. Ignore the Colt. 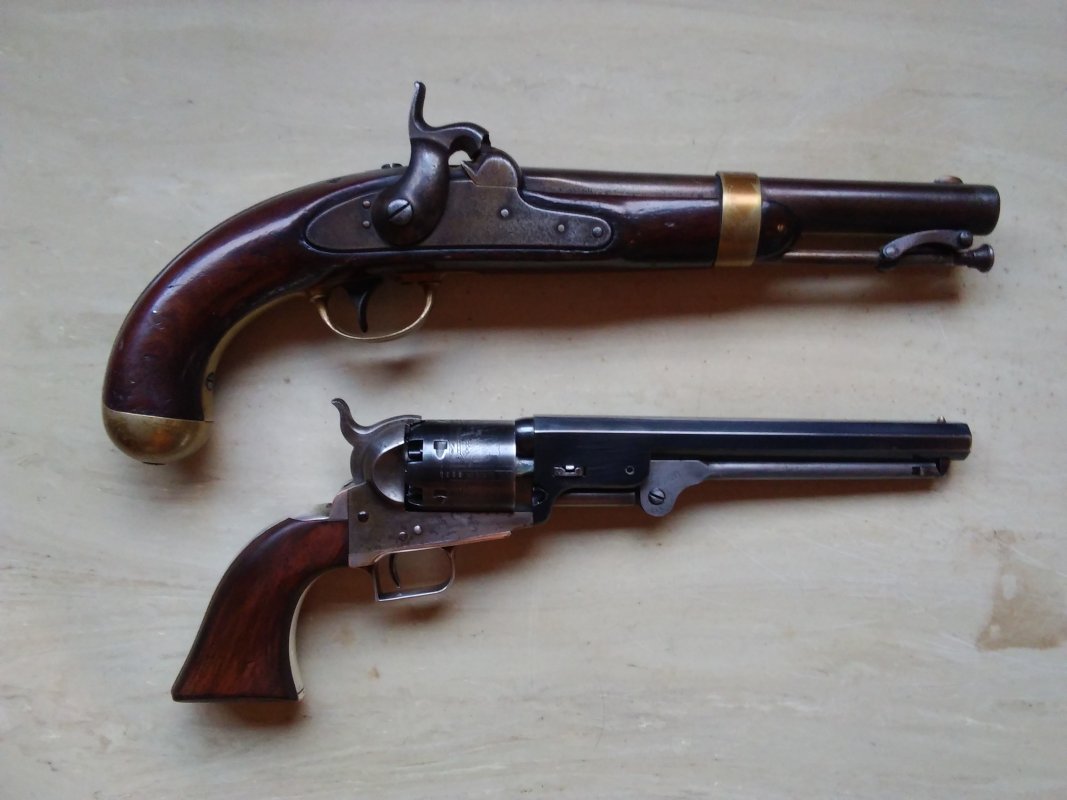 Nice!!!! Definitely post up some photos!! Both of them are beauties!!!
S

I shoot my m1842 Aston pistol. It's a lot of fun. I posted pics and details here:

Who shoots a horse pistol?

I recently picked up this M1842 Aston horse pistol. The bore looks pretty good. I removed the original cone and the threads in the bolster are fine . I put a new cone in it. Using a telescoping gauge, I measured the bore in several places. It runs about .550" - .554". I'm looking forward to...
www.muzzleloadingforum.com

Well I got it! Thank you for your comments. M1842 Cavalry .54 Cal Percussion Pistol by I.N. Johnson, dated 1854 from Middletown, Ct. She is in real clean shape, even inside the barrel. Did a very delegate partial breakdown/inspection with proper tools. Did notice a small crack in the wood above the barrel band top screw, doesn't seem to be all the way thru after removing the barrel, I can live with it and not going to mess with it. She seems to appear to be all original. A perfect addition to my 1863 Springfield Rifle. No real cleaning was needed at all. I posted up some pics hope not to bore you. One question I do have; on the brass barrel band, on top seems to be a cut groove in line with the front site. I haven't seen this in any other pics. Any thoughts on this? Maybe someone in the course of time did it? It does line up perfectly. I ran a bore scope, inspecting inside the barrel, its all clean looks good, I tested the pull, trigger firing 2 musket caps. All good. So now just waiting for the .530 lead balls to come in and off to the range. 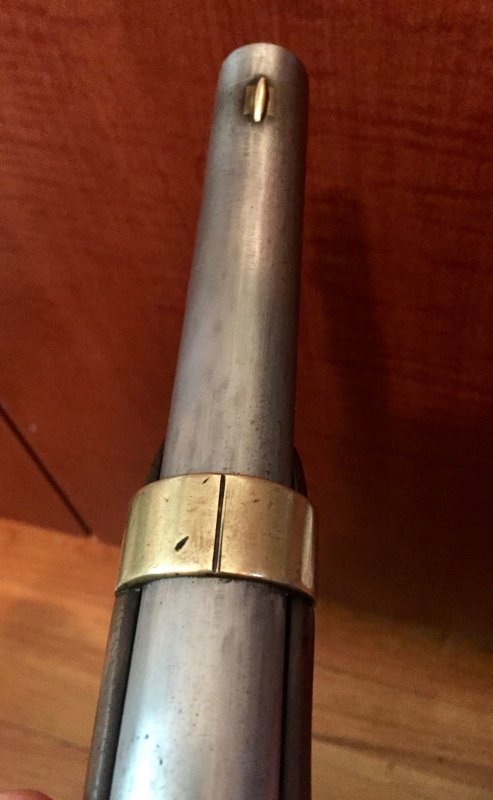 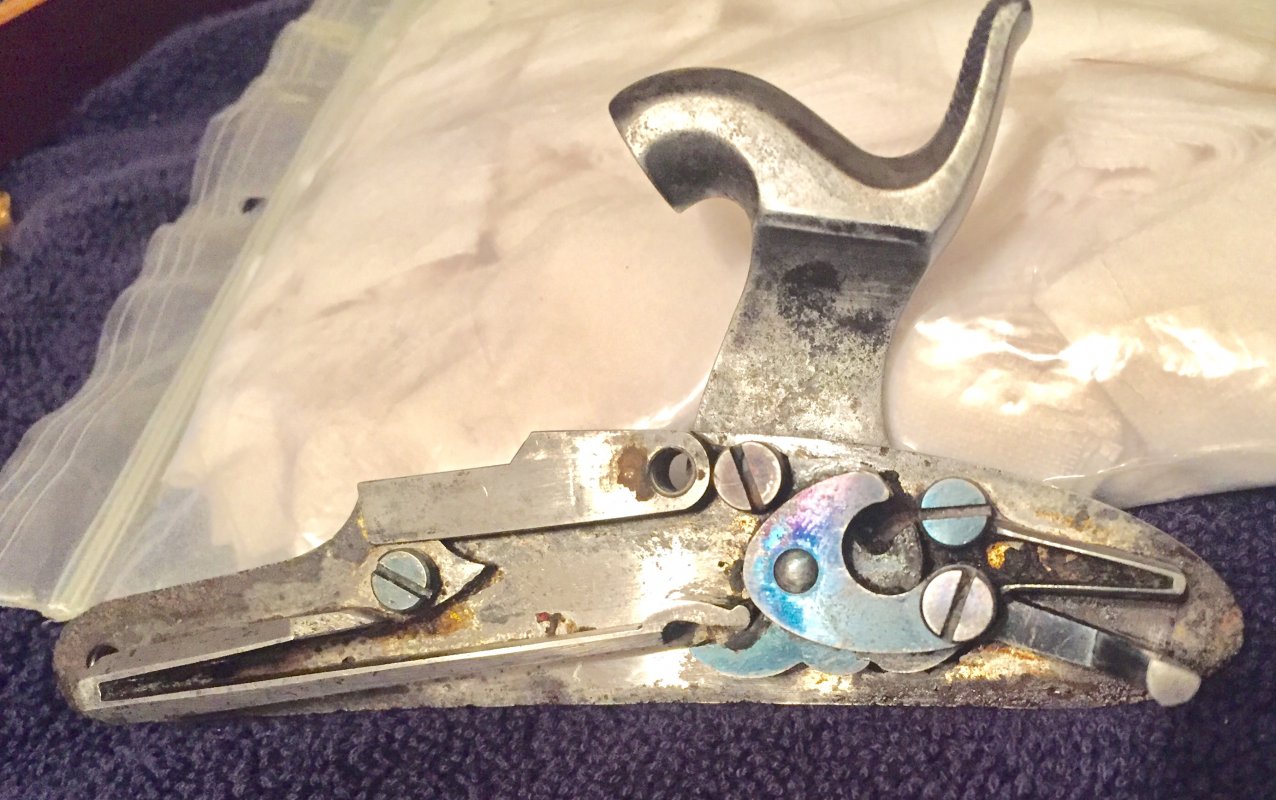 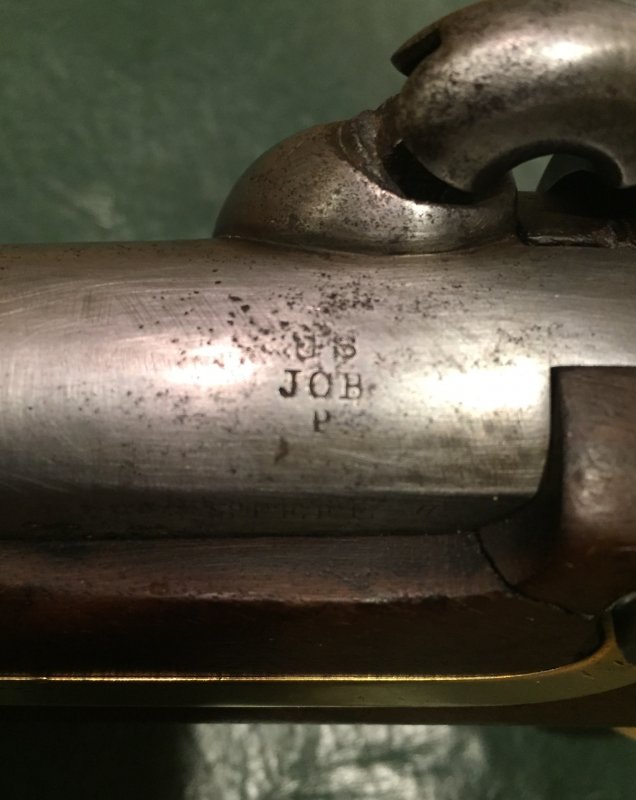 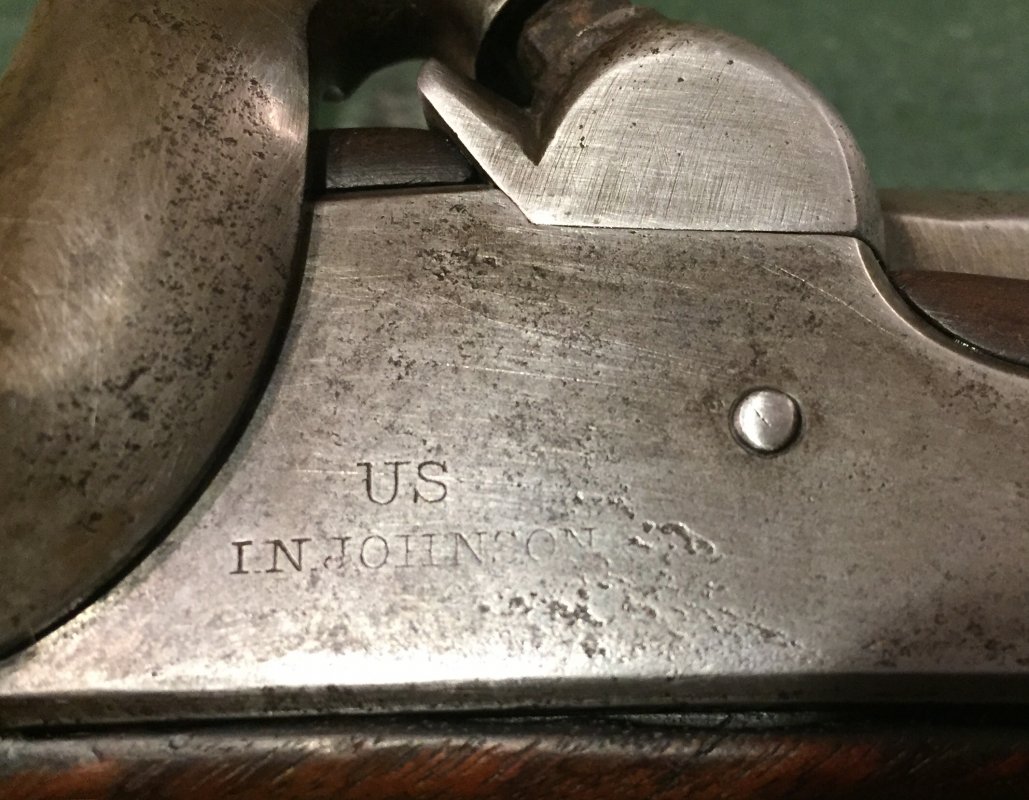 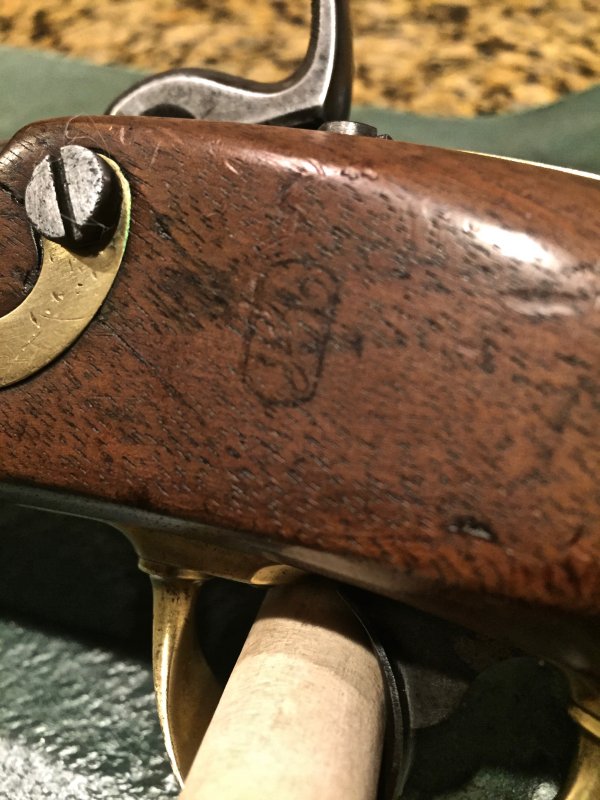 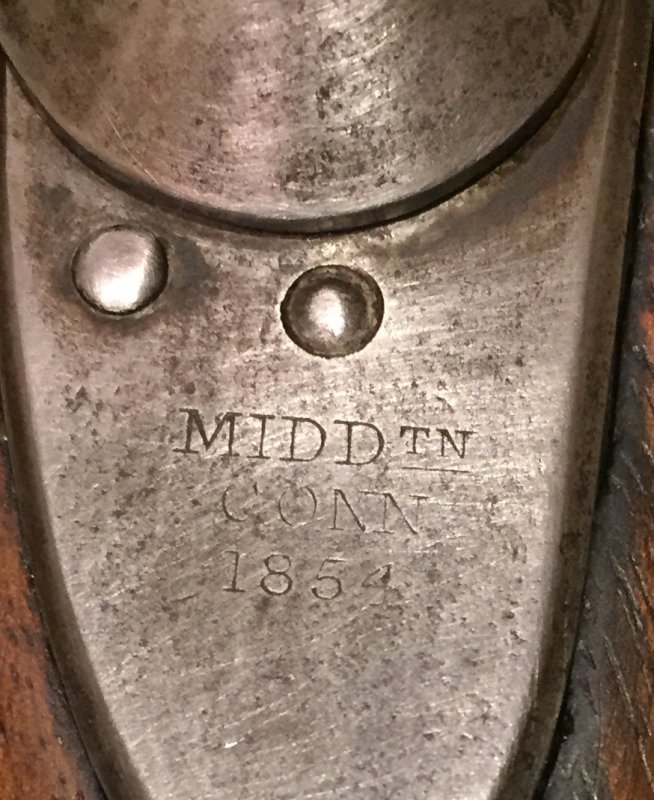 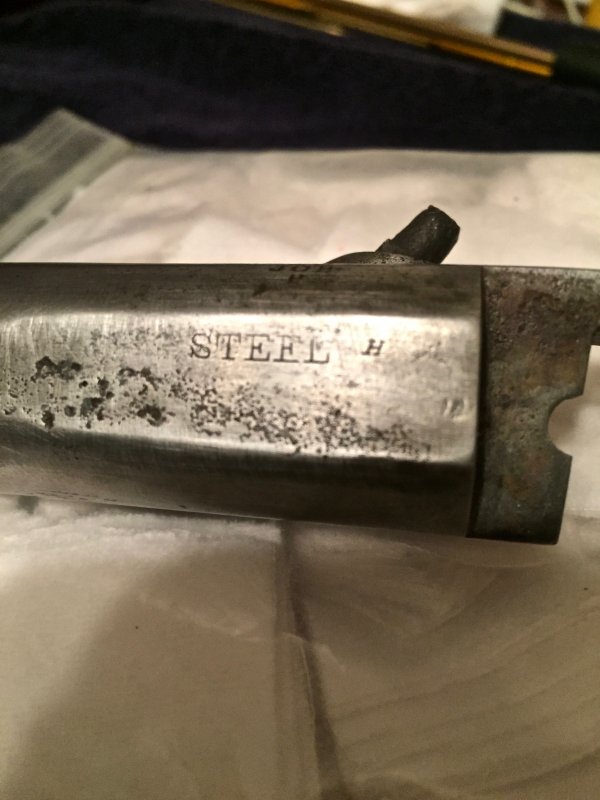 Sweet looking pistol. My 1853 by the same maker is lacking the groove in the band but has the same small crack at the rear lock screw which I think is not that uncommon. Should have a mold for it in my hot little hands by this weekend

Thank you. I watched how some people reload on YouTube and they are pretty harsh on ramming the ball down which makes me wonder maybe thats how that area cracks. As with the groove still not certain that was originally done.

I'm working on getting a mold also and one for the 58 caliber mini.

Notchy Bob said:
As for shooting that beast, Mike Cumpston did a field/range test with an original and wrote it up here: Web Blast: The Aston/Johnson Martial Pistol of 1842. Mr. Cumpston is an accomplished pistol shooter and "gun writer," and he did a good job with this report. One thing to consider, as Mr. Cumpston pointed out, is that this is a pistol intended for use on horseback. You don't want a hair trigger on a pistol if you're perched on the hurricane deck of a dancing war pony. Mr. Cumpston's pistol had about a 15 pound trigger pull, which is evidently normal for these guns.

Thanks for posting this--the gun he tested was mine and we found the bore was worn enough to work well with .535 swaged balls and practical accuracy was in the 50 foot range. 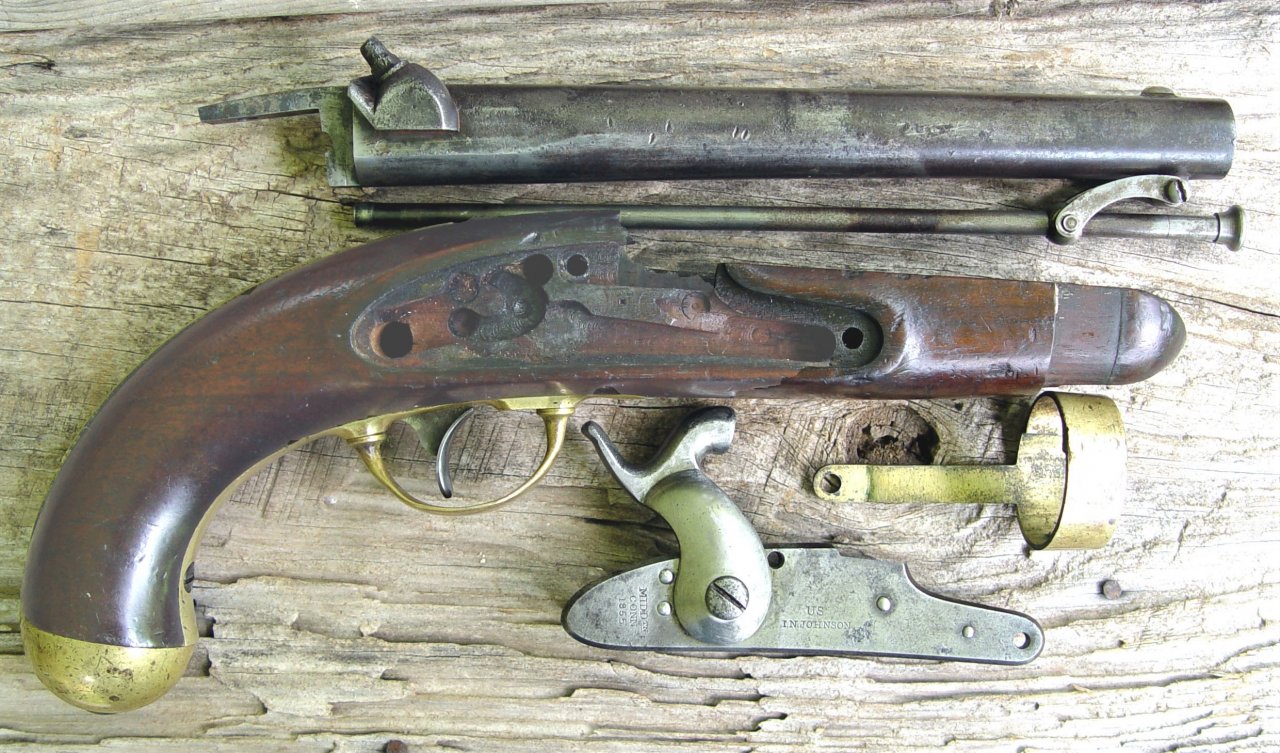 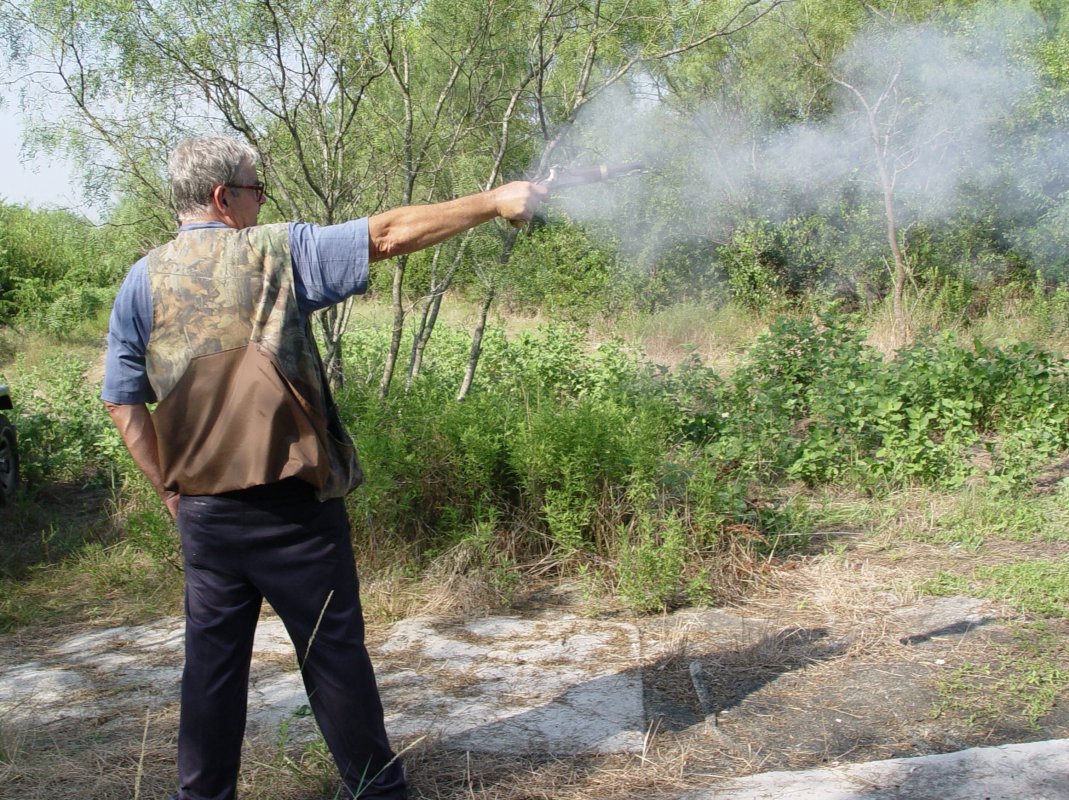 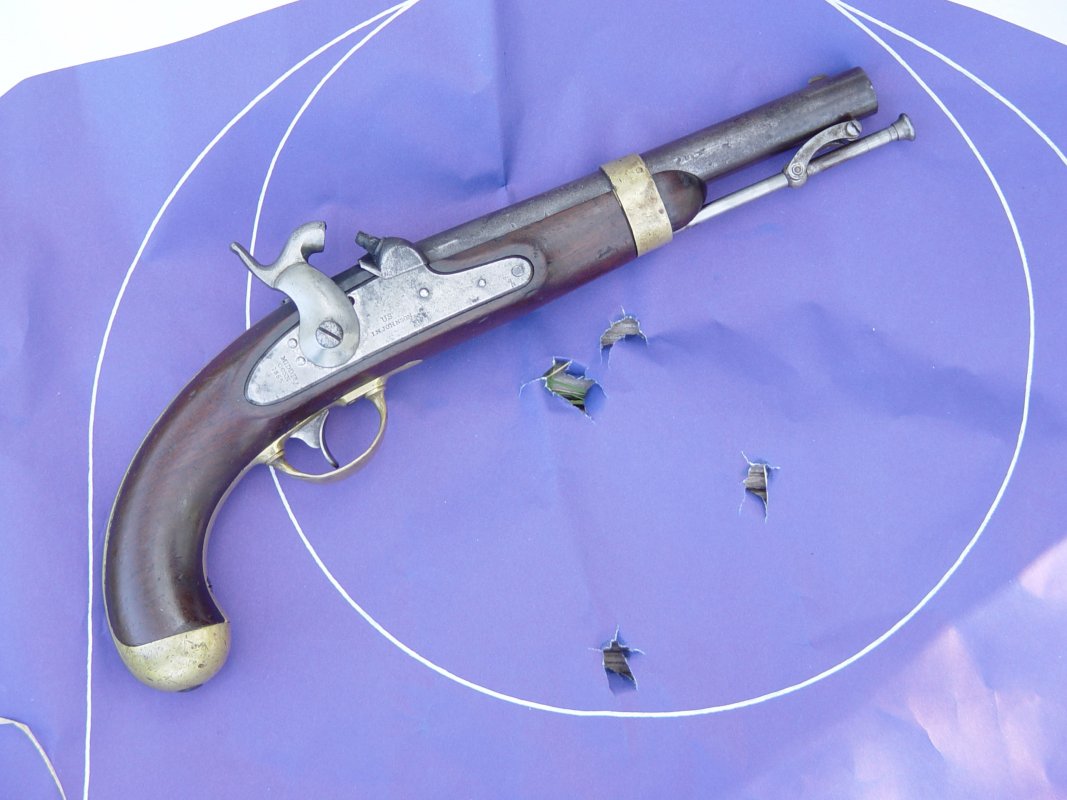 Nice photo of you firing and real nice grouping!! You have a real clean one with some good history around it.

Well finally got the .530 lead balls, had the space in the back yard no neighbors are near by figured on trying it out. Used 35 grains ffBP. Surprisingly not much of a kick and pretty loud too. But fun to shoot.

Congrats on getting the old war horse pistol up and running. I need to get some balls cast up and do the same