Tried it this time with my northwest trade gun smoothbore.
.600 round ball
80 grains of 3F
Pillow tick patch, bore butter lube.
My first 3 shots would have been a very good group-for me-but didn't score. 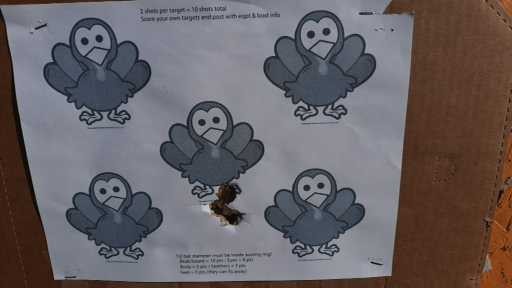 Here is the target after 10. It was a sunny mid 40's day here in Indiana. After firing 5 shots I looked at my gun and realized my flint was missing. I looked all over the firing line but never found it. I then looked in my gun box for the bag of flints I keep in there. I had taken them out last night to put one on my trade gun, then forgot to put them back into the box. So home I went, picked up the flints and continued on.
Mike B of Duelist 1954 believes that smoothbores can be made to be accurate with higher powder charges. I have seen him use 110 grains of powder. My shoulder would not tolerate that, so I kept it down to 80 grains. I normally load at 60. It did seem to help with point of impact. 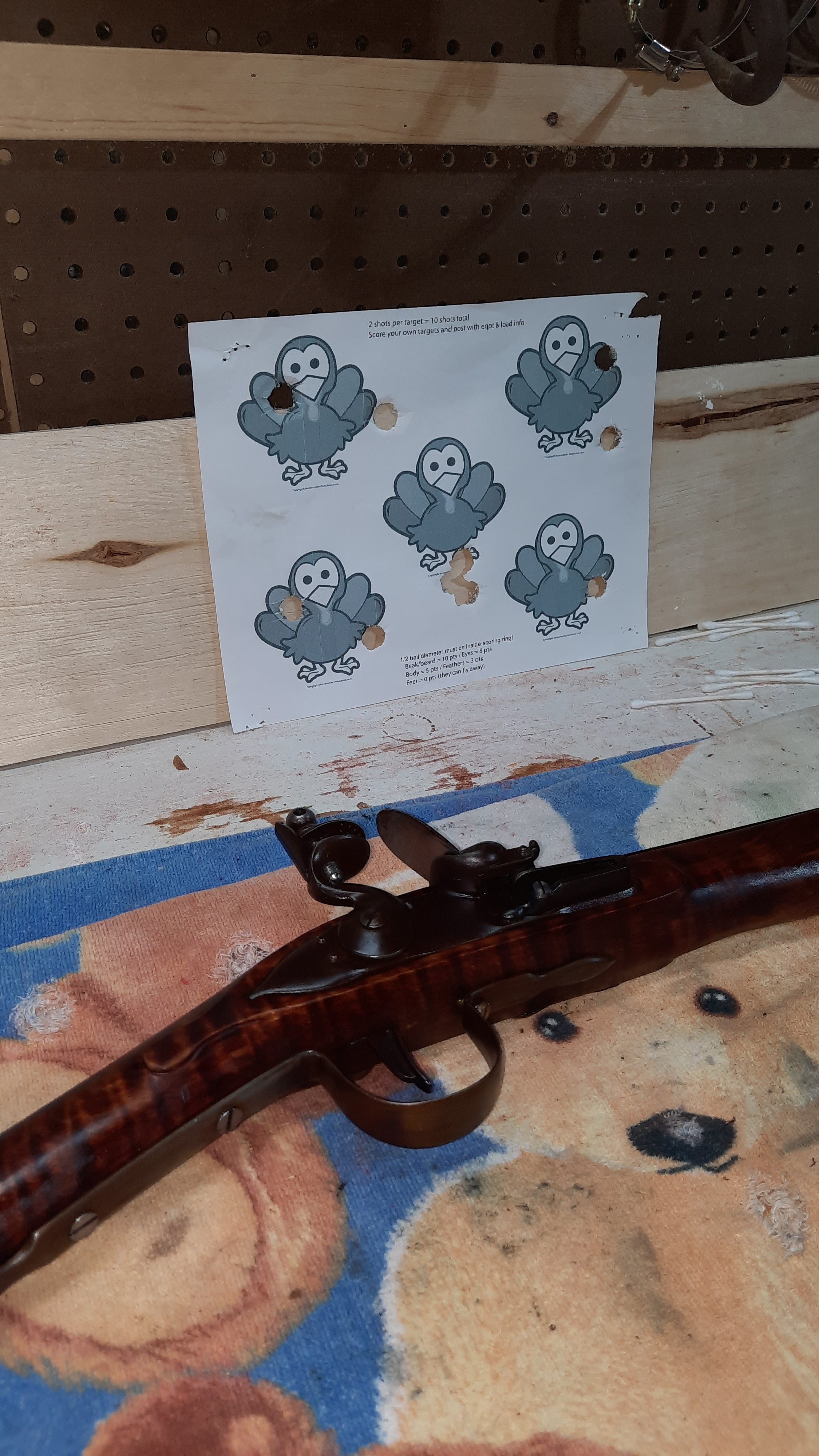 Shot this target on Friday with JAKEGA - he was the better shooter this day! We had a great time and this target was a little easier to see - have to make up a December target that we can all see better. 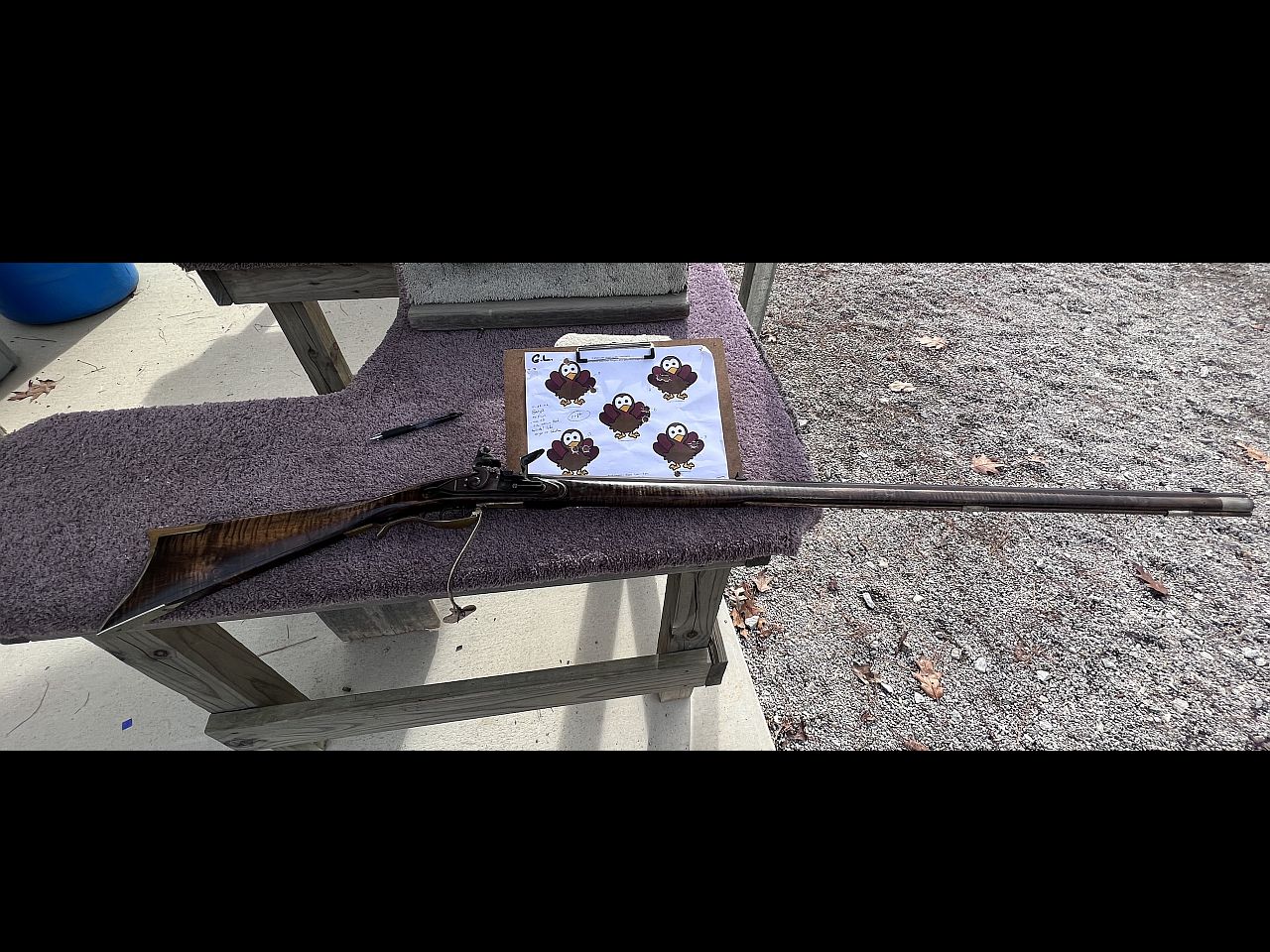 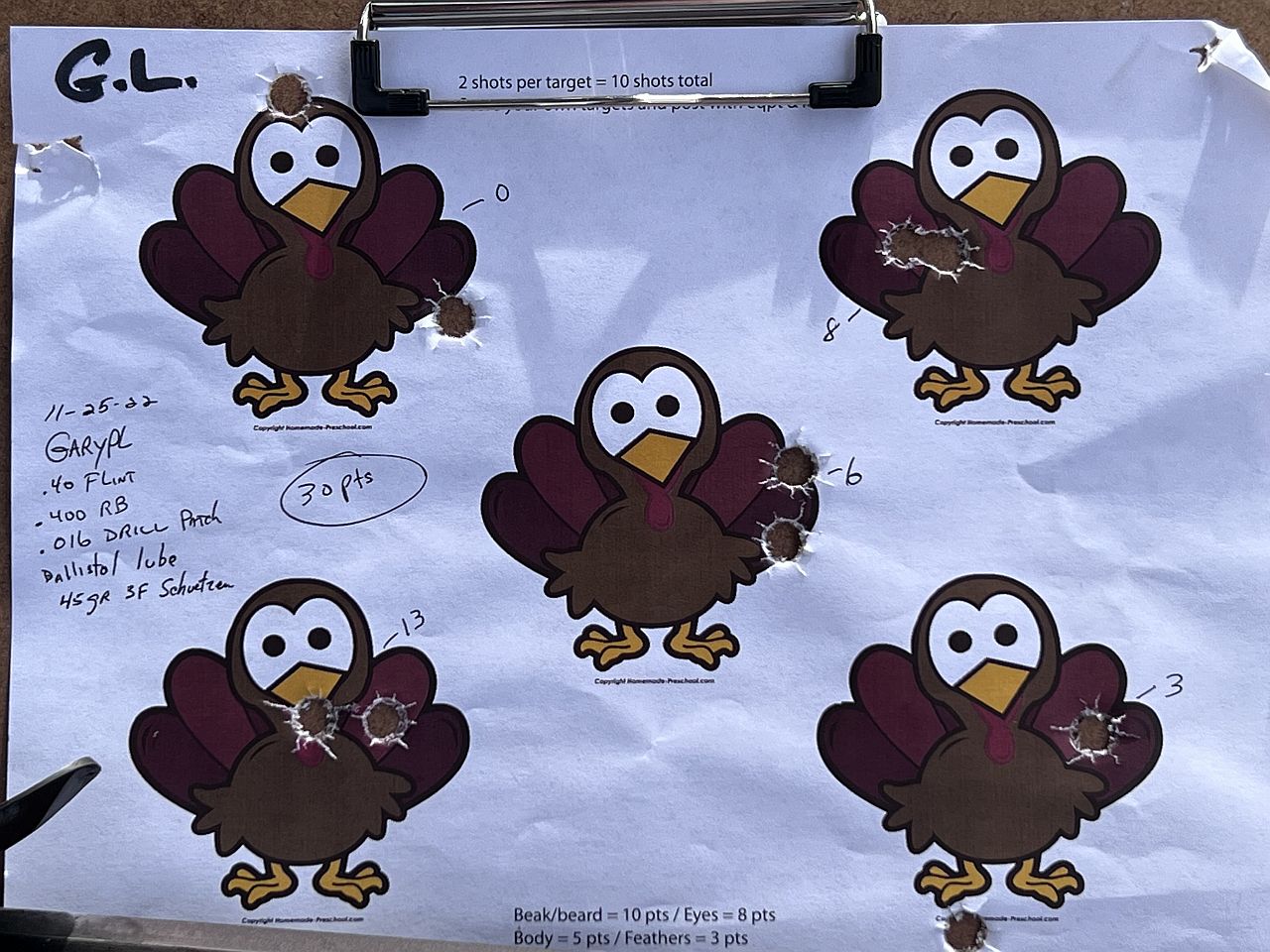 I think the 4th group counts as 10 for the beard and I didn’t count the body hit as it’s less than half. 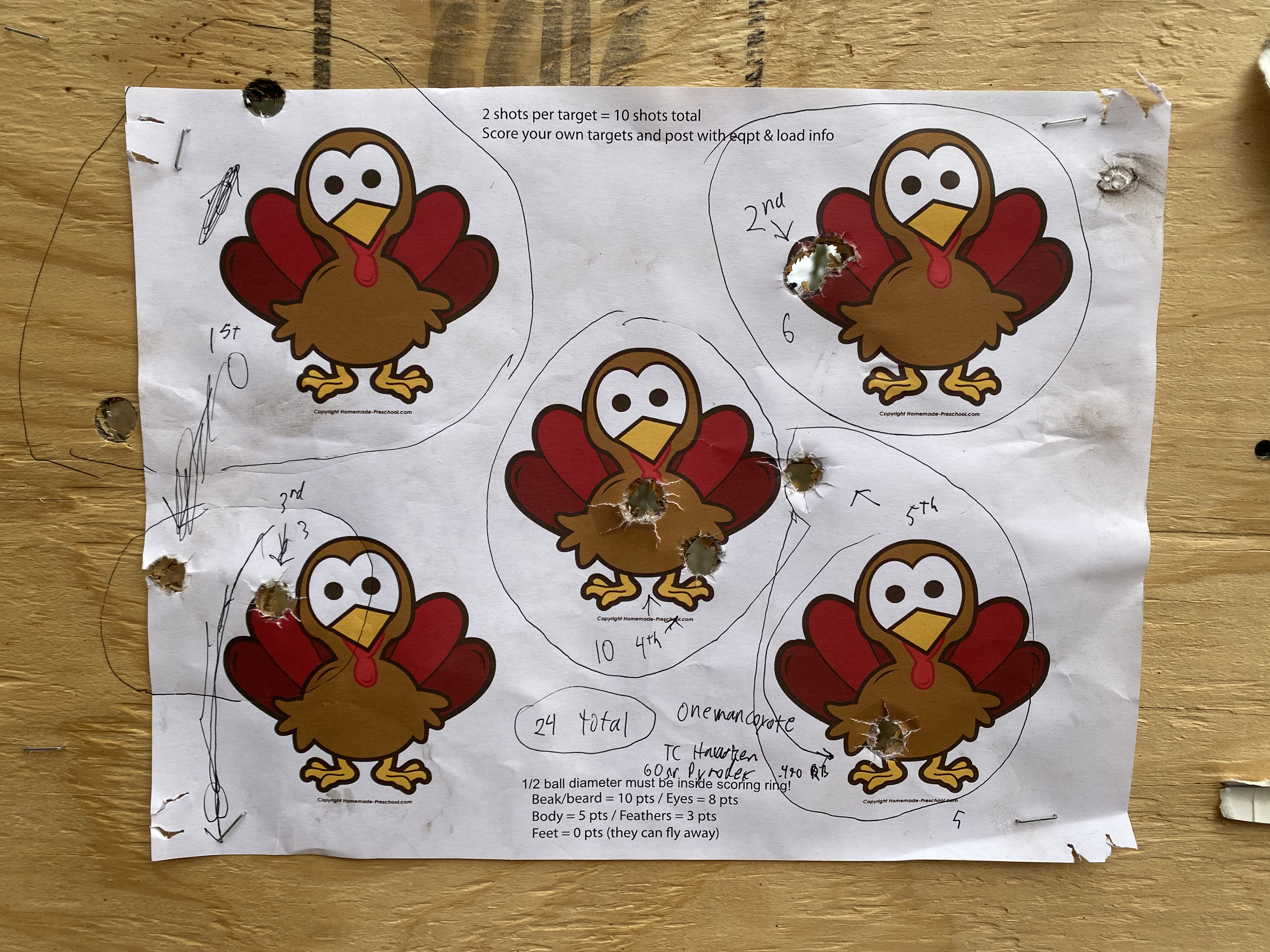 What a busy month! Thought i would get this done sooner.

Not too good, I'm calling it 17 points.
Three in the feathers and one in the eyes. 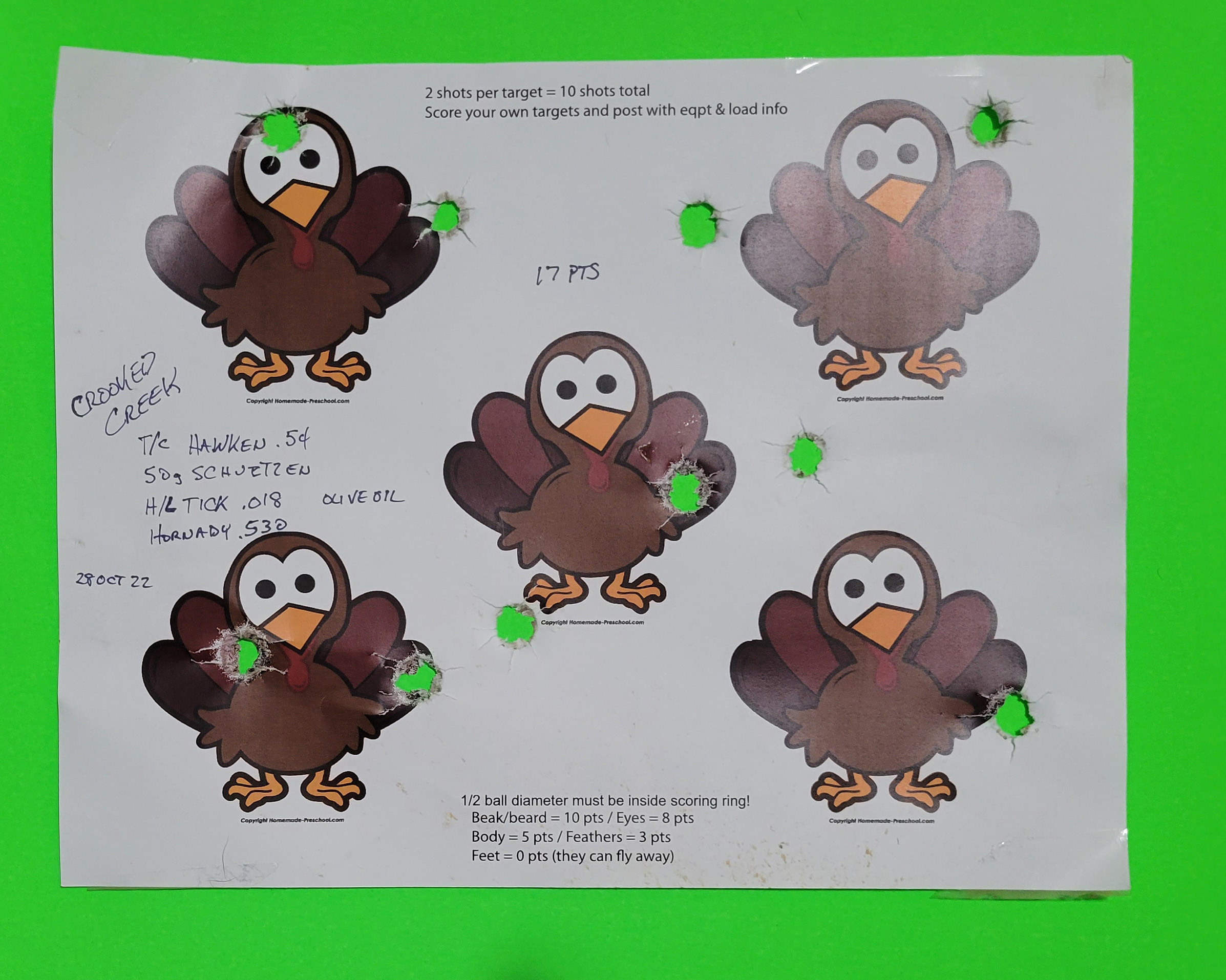 So close on most of the misses but glad you had fun with it and thanks for posting!

After a 7 month (forced) non shooting spell I finally got out and shot a target. Not very good but better than I had expected. 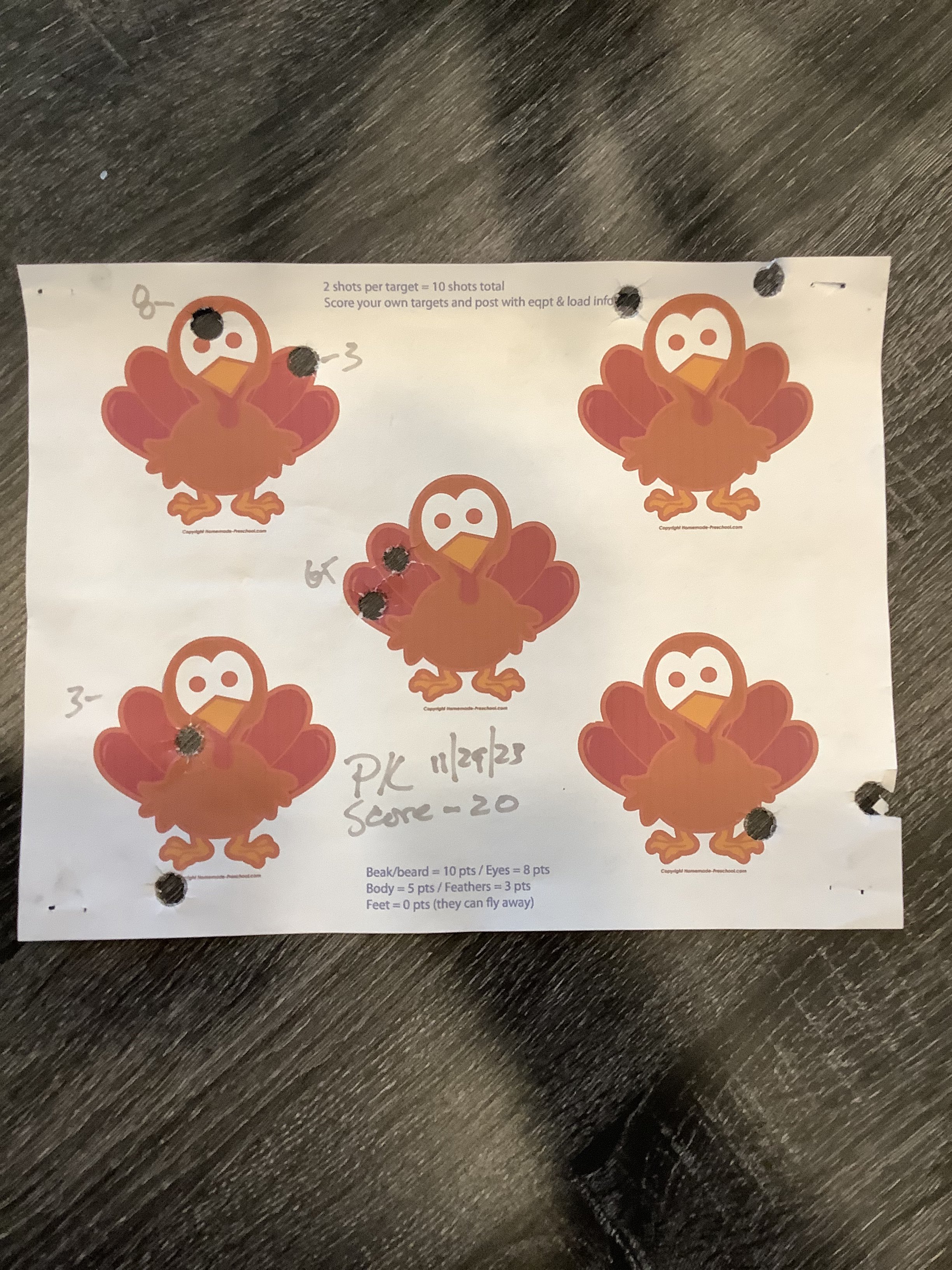 Welcome back! We’re you unable to shoot because winter just ended in MN? LOL!

I moved from Minnesota down to Georgia in 1986 and don’t think I could tolerate the extreme cold anymore. I sure do miss ice fishing though!

We always enjoyed winter but these days we’re spending our winters in Florida. The Lower Swanee River wildlife area has a hog hunt late January. Plan to break out the .54 Hawken by then and try to get one.
J

Finally got these turkeys done. I stapled them down, but they seemed to flutter around when shooting at them.

Hope all y’all had a good thanksgiving. I sure like this match, it’s like I am shooting with friends I haven’t met yet.

Those are some nice targets you shot J dirt - well done!

In the morning I'm going to work on a target for December. Let's see, Santa, Reindeer, gift boxes, so many possibilities!

November target is finished and we had 11 participants. Here are the results:

Hope everyone had fun with this target and thanks for participating! December target is posted and should be interesting - wish everyone a blessed Christmas holiday.