So you can take Townsend's recipe for hard tack, and color it and make it into shapes that can be any size.

the problem with targets that are destroyed, is they need to have a person assigned to put up fresh one for the next shooter. The Advantage is the stuff is biodegradable. The other advantage is that a thick, home made, baked hardtack target may resist the damp in a light rain but saltines won't. The disadvantage might be needing to bake a lot of them. 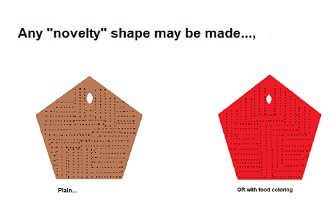 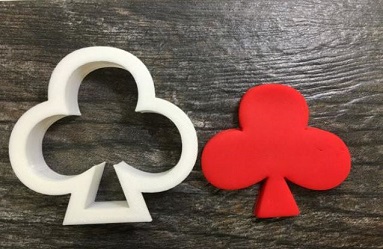 So IF you can get pepper poppers, which are steel targets used for modern pistol matches, EXCEPT you also buy polyester knit hats, in bright colors, and put them on top of the poppers...., but they need to be XL so they are not "tight" on the targets. You set the poppers NOT to fall backward, when hit. So the soft round ball hits, splatters, and some of the splatter knocks the knit hat up into the air. 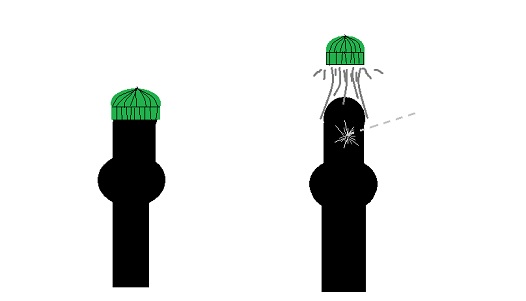 Have the shooters don really dark plastic glasses, like you see some folks with cataracts using, or very dark safety goggles, to simulate shooting at night. Scenario: "You hear a bear is getting into your beehives, and you have to stop him? " and then use a bear target with a gong over the vital spot..., they have to hit the gong, but you can paint it white and be nice, or dark gray to make it tough OR black and make it really tough. IF you don't ring the gong, you missed..., load and shoot again. 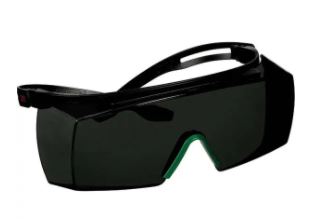 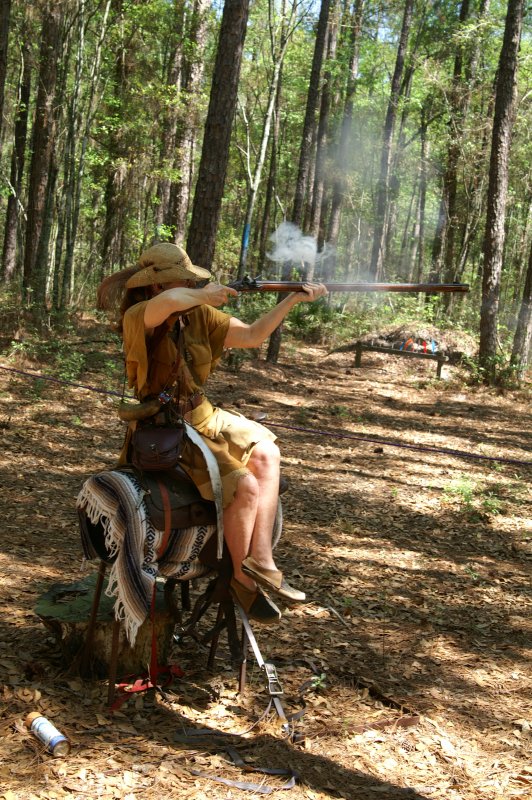 Here's a picture of Brushy Creek ML's barrel mounted saddle. It was pretty shaky, and a range officer held the shooter's rifle while he/she mounted and got their balance. The target could be straight ahead, or at an oblique angle.

Along the theme of shooting from an unnatural feeling posture, you could drive a wooden stake in the ground, near a bush, gully, hill, etc and require that the shooter have one foot touching the stake when they take the shot. One sadist in Jefferson Longrifles would set stakes with a big tree right between the stake and the target where you'd have to lean about 2 or three feet in order to keep your foot on the stake and be able to see the target. Or, get a 3 foot length of 1x12 and set it over a 4" diameter pipe like a teeter-totter and require the shooter to stand on the board with one foot on each side of the pivot point-guaranteed one foot is going to be higher than the other with maybe some movement from the board.

Rattle Box: Saw this at Alafia River years ago. The Rattle box is a 6"x6" wooden box, standing about waist high that functions as a timer for making the shot. It has a hole in the top, and internally has sloped overlapping wooden baffles and maybe a cheap bell or piece of metal at the bottom. Shooter takes their position with a loaded and primed gun. In one hand they have a stainless steel or lead ball which they drop into the hole in the top. The baffles are arranged so it takes about 5 or 6 seconds for the dropped ball to fall through the box and hit the bell at the bottom. Once the ball is dropped, the shooter has the 5 seconds to get his hand back to his gun, sight and break the shot before the ball gets to bottom. You hear a clunk-clunk-clunk-clunk-ding as the ball makes its path downward. The target can be anything like a gong, apple, cracker, etc.

Hanging/swaying targets: Targets were metal outlet box covers, around 4x4", painted red or orange on one side, and suspended by a single string in one corner. To count as a hit, the ball had to hit on the painted side, so you had to take into account swaying from the breeze and twisting.
P

Larry (Omaha) said:
OK guys n gals, a friend called me today (president of a local ML club) and said his club wanted to spruce up their novelty matches with new ideas. I gave him some I know, but would like to ask this forum for suggestions.
If you would like to suggest some novelty targets here are the parameters: 10 to 50 yard distance, no post cutting matches, nothing that requires rapid loading, and do not suggest anything listed.
Cutting string
Cutting cards
Shooting at double bladed ax to hit target on both sides of blade
Charcoal briquettes
Eggs
Cut a feather
Shooting at tack heads
Candle flame extinguish
Gongs
Hitting a plastic bucket so it stays in the bucket (does not go through both sides)
All suggestions will be appreciated.
Larry
Click to expand...

this is for c&b revolvers

The object is to get the lowest score, and all shots off the paper count as 10

ideally you hit the corners which are the lowest scoring point on the paper, but then you have a good chance of going off the paper and getting a ten.

A fun shoot is tape a string onto raw eggs, hang them out 25 yards. You get one shot bust the egg or you eat it RAW. winner is last one who hasn't eaten an egg. I never ate an egg.

The bottle target available from the NMLRA was always popular at our matches. Takes strategy because you get more points going for the neck. If I recall the scoring is 3pts for a body nick, 5pts for completely in the body, 7pts for a neck nick, and 10pts completely in the neck. Hitting the dividing line would be a neck nick for 7pts. 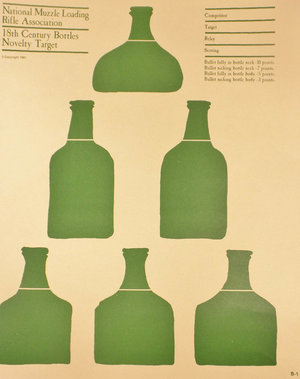 Years ago we ran a contest that involved 7-8 tongue blades/depressors for each shooter. Each set of tongue blades and a popcicle stick was painted a different color. They were strung on small branches so the wind would swing and bounce them, others stapled on target boards at all kinds of angles. Painted popcicle sticks were placed in a bag, and everyone drew one without letting any other contestant know the color. The object of the shoot was to hit everybody else's color but yours. You are out when your sticks were shot. Need a couple sets of eyes to determine when people are out and who is the winner.

Also have made up swinging targets of coffee filters filled with flour. Never a doubt when you hit one.
R

There are 2 novelty shoots I enjoyed back in the early 1980’s. The 1st was the “can shoot”. Everybody places an empty Coke can (Dr Pepper, beer, etc.) at 25 yds. Each shooter takes “only 3 shots” at his can. The objective is to kick your can down range farther than the other shooters. The shooter of the can that kicks their can the farthest down range wins.

Steak and egg shoot , this is a team event , Sharpen the the end on some old timber 2x4 is ideal ,in about 3 foot lengths , Drive the wood into the ground about 25 yards away , either hang the eggs taped to a string or use some 8 gauge wire twisted at one end to make an egg holder at a difference distance from the steak , a team of 5 would have one steak for the team and one egg for each shooter . The idea is each individual hast shoot their own egg before they start on the steak , fastest team to shoot all the eggs and cut the steak in half wins .

We use our dueling tree to practice / compete for faster reloading times under stress.
2 shooters with 2 plates on each side. On the signal both shooters engage the first plate and then reload and engage the 2nd plate. Speed is good but accuracy is final in this game. The shooter that clears his plates first wins. The competition aspect induces some stress similar to a hunting situation.
The dueling tree can be configured with the same size plates or progressively smaller plates or "handicap" plates. (smaller plates for the more experienced shooter) This is a very useful tool with many applications. 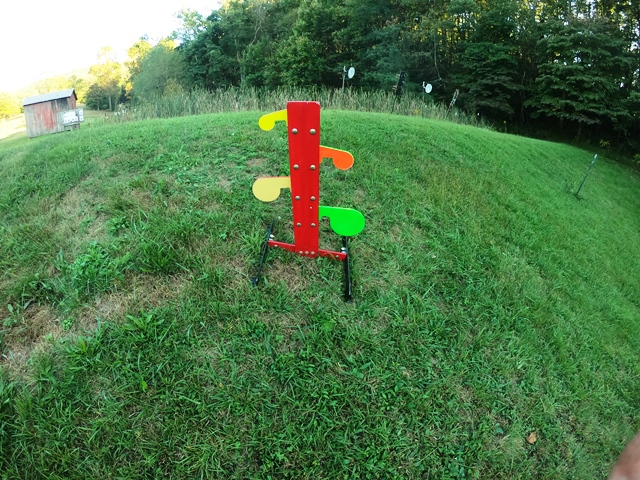 Mike Fink. Either paper target with tin cup on head of figure or a Coconut water can (steel) filled with red Kool Aid mounted on a board with hole to hold it and a paper plate with smiley face drawn on it stapled below can. Deck of cards on a board and shoot five times for best hand. Or single shot at back of board and see if you hit a high card. Instead of speed shoots, time how long it takes to load and shoot once and use that to get fastest time to (by counting number of shots) to shoot a string of suspended targets. Speed shoots can be inherently dangerous because you aren't swabbing between shots with a damp patch. We've had gongs on a wire going down hill for a moving target match. Moving candles on a stationary base operated by ropes at firing line. Targets hung on a clothesline with clothespins. Negative point or points if you hit the clothespin instead of the target. We had to shot the ace of spades on a card held in the stump with our patch knife. Variation of egg using plastic easter eggs filled with flour and hung with a string. A round ball dropped into a curled pipe that hits gong or bell. You have from the time you drop the ball to before the bell rings to shoot and hit your target. Shoot through a steel hoop to hit gong behind without hitting the hoop,

Larry (Omaha) said:
OK guys n gals, a friend called me today (president of a local ML club) and said his club wanted to spruce up their novelty matches with new ideas. I gave him some I know, but would like to ask this forum for suggestions.
If you would like to suggest some novelty targets here are the parameters: 10 to 50 yard distance, no post cutting matches, nothing that requires rapid loading, and do not suggest anything listed.
Cutting string
Cutting cards
Shooting at double bladed ax to hit target on both sides of blade
Charcoal briquettes
Eggs
Cut a feather
Shooting at tack heads
Candle flame extinguish
Gongs
Hitting a plastic bucket so it stays in the bucket (does not go through both sides)
All suggestions will be appreciated.
Larry
Click to expand...

When and where is this shoot?

newtewsmoke said:
When and where is this shoot?
Click to expand...

The original post was not about a specific shoot. The president of Rock Creek Renegades was asking for suggestions to expand their novelty shoot matches. Check out the UNMLA website for RCR future shoots. index page
Larry
R

J
Flintlocks: How to Shoot Them
2