North central Ohio reanacting of the the early 19th century

I have been lately more interested in my local area and Ashland county Ohio isn't that far away from me. I found this article http://ashlandohiogenealogy.org/biographicalsketch/mohican1.html and it seems that the frontier era days of the Mohican River valley(Ashland County) spans from the late 18th century to 1812. The local Natives in this area where Lenape and had multiple villages, and it seems that most were removed from the area in 1812.
One of the settlers of this time was a man of Scotch-Irish ancestry named Alexander Finley born in 1770. He came to the area in 1803.
So (one of) my question is, what type of clothing was worn in 1803 in the Ohio frontier? I don't know very much on this time period, so please bear with me. Would 1770s clothing be appropriate for this time and geographic area. So just explain what this man named Alexander Finley dressed like. Also, how much native articles of clothing would be on a white man at this time?
What would the dress of the Lenape be like at this time, would it be more reminescent of the rev war era or war of 1812 era?
Also theres a French trader that lived in the area also, and he married into the Lenape tribe there. His name was John JerryBettis Jerome. I though there were no more french woodsmen in Ohio anymore because the french lost the FnI war. So what would he have dressed like in 1803 living by himself with his squaw?
Sorry for all of these questions, Im just trying to figure out how these people dressed in 1803 in Ashland county Ohio, so I would be able to reanact this time period in my area.
NWT Woodsman
Last edited: Jun 30, 2019

The fashions of the 1770s were thirty years removed from the Jefferson Administration. My opinion, for what it's worth, would be that Finley would have worn more Regency style. Breeches were still worn, however the cut was a little different, being higher waisted, tighter, and losing some of the "pumpkin butt" look. Suspenders were becoming popular at this time as well.

Vests were shorter, and square cut, sometimes having high stand-up collars and wide lapels. Some were double breasted, others single breasted.

Shirts were still cut on the same pattern as in decades past. But here again, the collars had risen to nearly the bottoms of the ears, when worn standing. They could be folded down, as well for work.

The round hat, or as we call it nowadays, the top hat was ubiquitous, like the baseball cap of today. All classes wore them.

The sleeves of jackets were tight, extending nearly to the knuckles, and the shoulder seams were quite high. Collars could be standing, like the ones on a man's vest, and the length was as low as the vest. Alternatively, jackets could have M notch lapels, like tail coats, and high fold down collars.

Thank you Cruz! For the info.

Happy to be of service.

Would a gage de mor be appropriate for someone in the ohio country in 1803? I dont see why not if they existed then, sence there were still some french trappers/traders during that time.

Well.....it all depends. It depends upon your ethnic impersonation. Are you impersonating a French Canadian working for the Northwest or Hudson's Bay Co.? Or, are you an American settler?

To answer your question with more certainty, it would be a good idea to consult period illustrations, paintings, journals, etc. Mixing and matching at will may cause confusion as to what it is you're trying to do.

On the other hand.....if you aren't particular about living history and re-enacting, then do whatever you want. If you smoke a clay pipe around the campfire, a gauge d'amour can be a handy addition to your outfit. Personally, I find they just get in the way most of the time.

I have a copy of the book "Karl Bodmer's America" which is the "photo album that Prince Maximilian of Wied-Neuwied commissioned Karl Bodmer to paint during the journey to America in 1832 through 1834. There are relatively few paintings and sketches of settlers on the Mississippi, Ohio. There are a lot of paintings of the tribes of the west. I will put a few of the paintings of the settlers. We can see that there is a great change in style from the 1800's. The men are wearing breeches to the ankle. Top hats are very common. Frock coats are long and waistcoats are short. I do like the picture of the naturalist, Charles Alexandre Lesueur, that was painted in the fall of 1832 near New Harmony, Indiana. 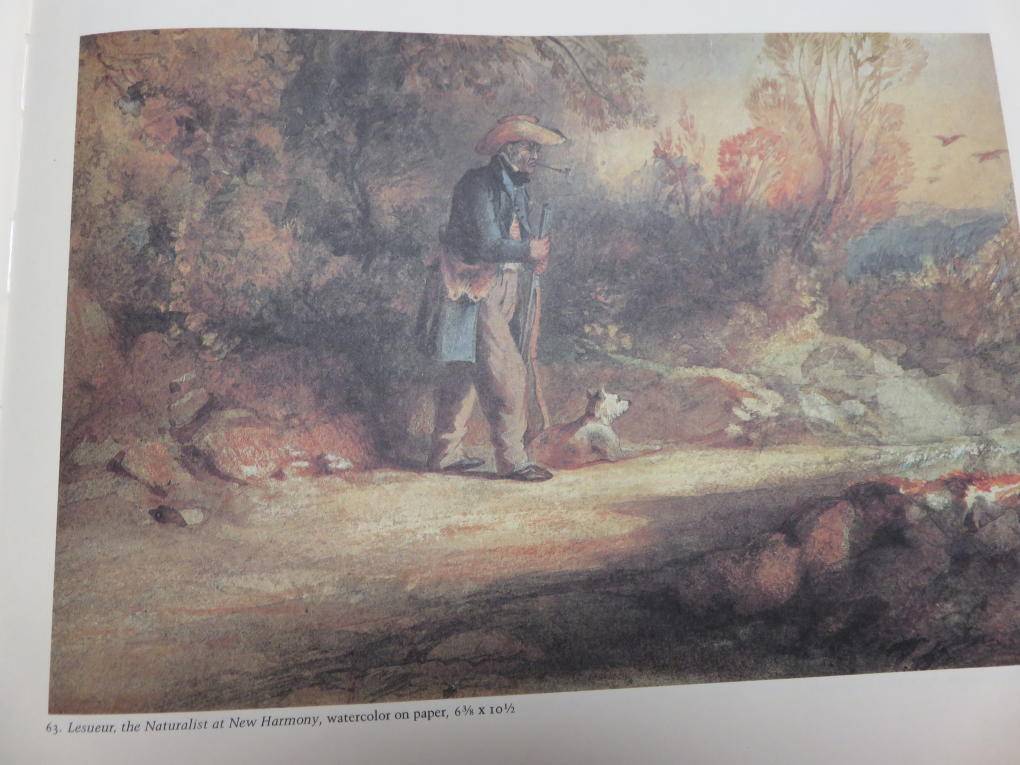 Lesueur is carrying and interesting pouch. His pants are long, He is wearing a straw hat and his firearm has an attached sling.

The other hunter, Russel, also from New Harmony was painted in February 1832. He too is wearing long breeches. He is apparently wearing (tied) shoes. He has a pouch and a fairly large horn to supply powder for his long barreled rifle. 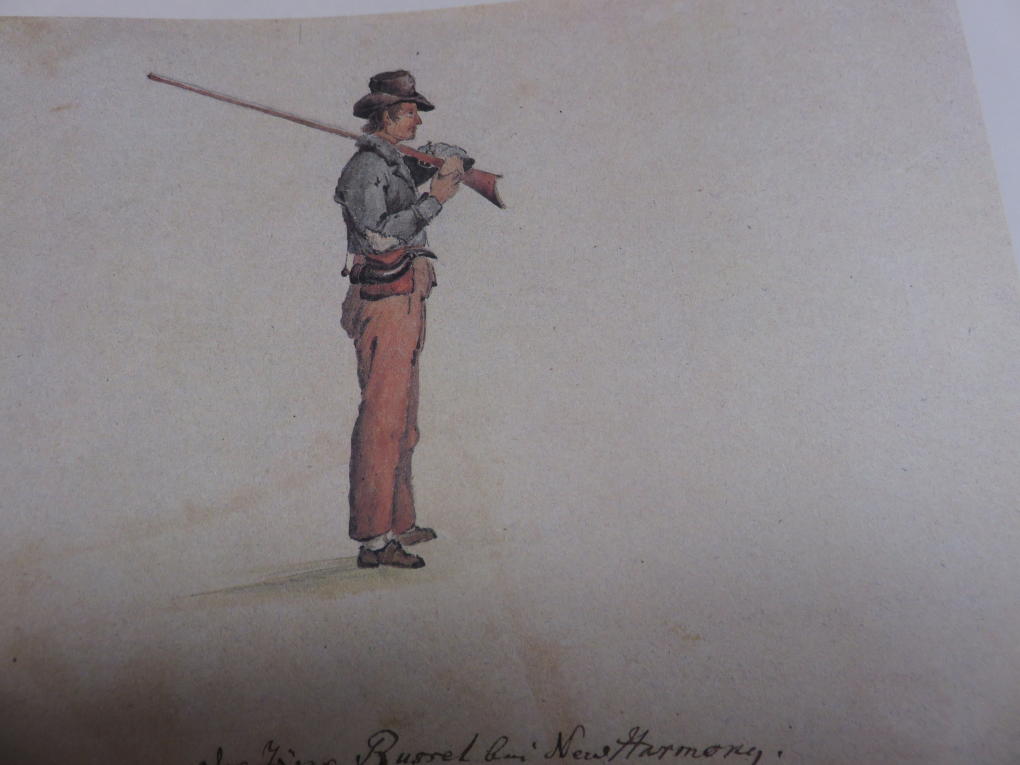 Civilization was coming to the frontier. The next painting done in New Mexico, Tennessee near Memphis in 1833, shows a few gentlemen in a substantial town. All wearing top hats, long breeches and long frock coats. 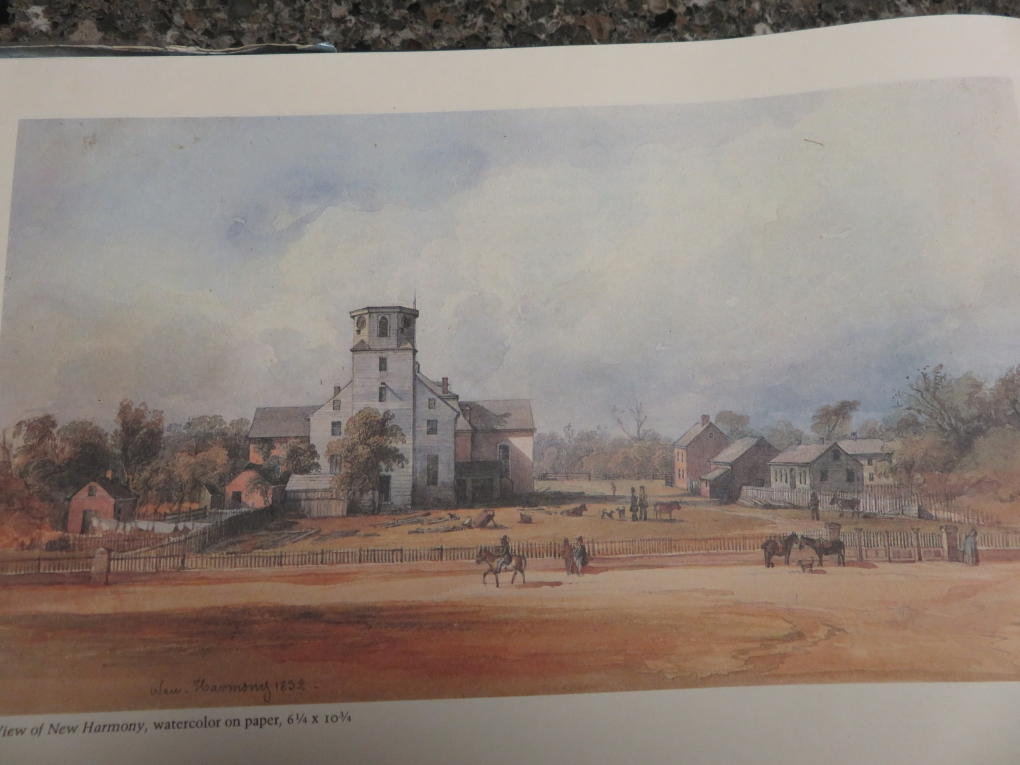 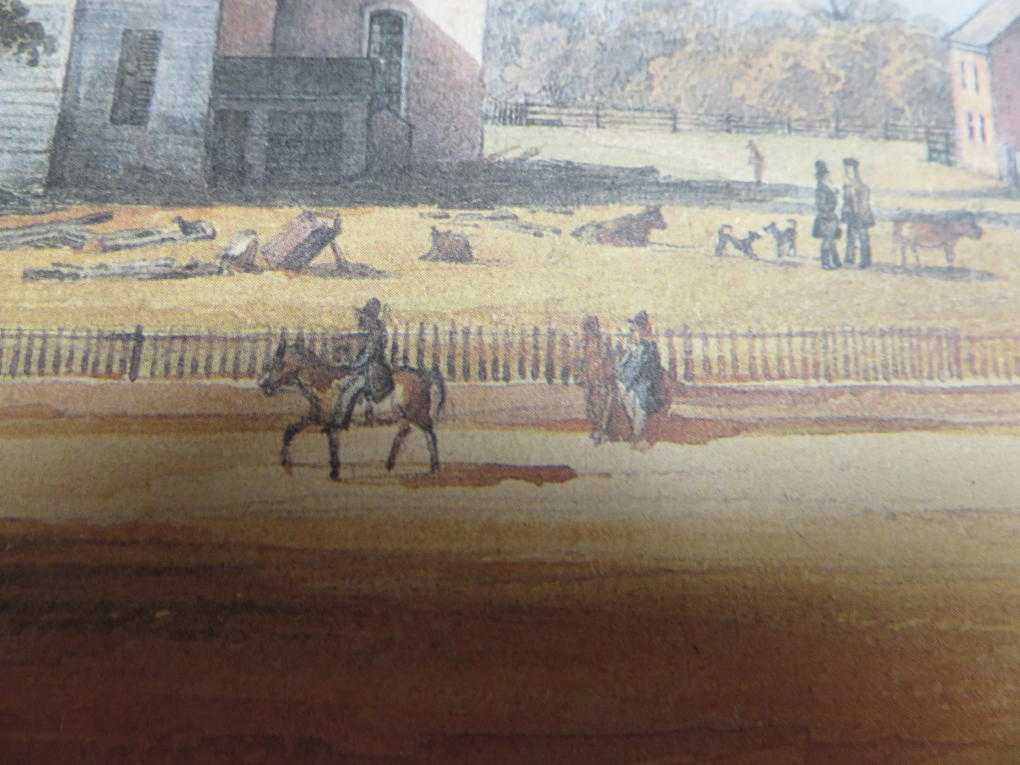 There is one portrait of a Choctaw that was painted at about the same time before the tour traveled to the west to the great plains. 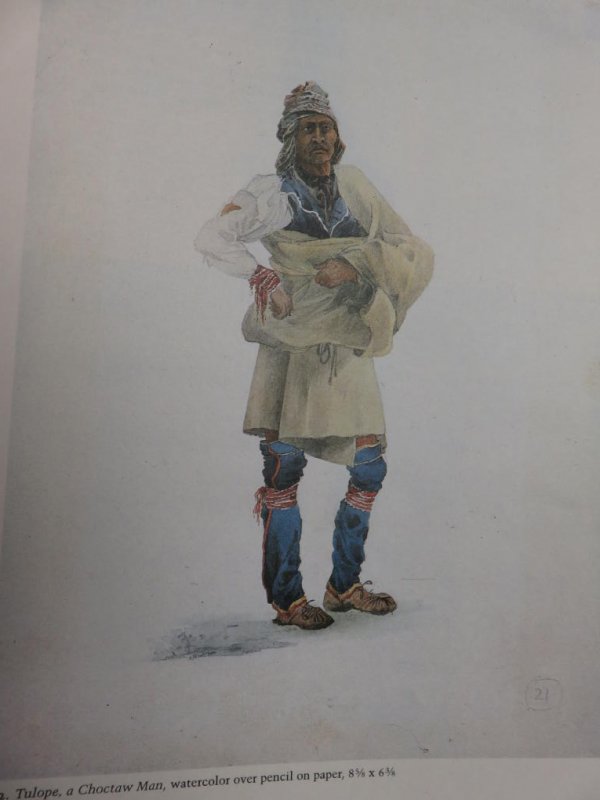 Here we see the influence of the European styled clothes in the shirt and waistcoat, However he isn't giving up his turban, leggings, moccasins and woven sashes.

NWT Woodsman, You’ve received pretty good advice so far. I’d just like to say if you get a chance, travel to Fort Meigs, they have excellent bookstore as well as a great museum. Several of the volunteers also reenact the 1812 era and May have some advice as well.

Also come check out the 225 re-enactment of Fallen Timbers August 17-18.

Thanks Tommy Bruce!!! I'm lookin up the reenactment rite now.

I'd also recommend checking out Fort Labuse (spelling may be wrong) in Belleville and Greentown Preservation. Have been to rendezvous and both and they're great places.

If you'd like any more info on attending rendezvous, check out Smoke and Fire's newsletter, or shoot me a PM.
S

Thanks .Im transitioning from f& i, long hunter, colonial to a later era in the great lakes region, think this is what I was looking for

R
Along the Susquehanna
2 3

Genealogy to Colonial times and beyond