I thought it would be fun to have a short barreled 1847 Walker, especially after noting how the AR-15 crowd at the gun range reacted when I was shooting my 9" barreled Walker last summer; they were very surprised and curious about the noise, smoke, and fireball! I always shoot it with full powered loads.

After that, I wanted a short barreled Walker, but I didn't want to buy a gun just for this. I eventually found a used barrel (with loading lever) for sale on this forum, and bought it.

The barrel arrived yesterday. I did have to do some fitting to get it to work on the gun. Then I shortened the barrel to 4-3/8". I made a new front sight for it out of a length of brass rod, and I left it extra-long, so I could file it down to sight-in the gun.

I modified the loading lever to be quick attach and detach, because the lever was now too long to just leave it in place. I did not want to cut it and have an extremely short lever, because that would be next to useless, and I did not want to bother with removing or installing the screw every time I wanted to load the gun. So, I drilled out the threads for the loading lever pivot screw, which made the hole 3/16" diameter, the same as the loading lever screw shank was. Then I made a pin for it out of an old part for a screen door latch that I found in my miscellaneous parts bin in my garage.

I got done early today with work, so I drove out to the range to test fire it. When I arrived at the range, the temperature was right around freezing, and a snow storm was starting and I was not dressed properly for the weather. Still, I was very anxious to try the new barrel. I was the only one at the range, but there were a few people in the club house doing something. Also, the sun would be setting soon, and I was losing light. I fired off the first six shots and was delighted! LOUD and lots of fire!!!

I started preparing another six smiles of joy, when an old guy from the club house walked over to me. I could see that he wanted to talk (I didn't), so I removed my hearing protection. He wanted to know what I was shooting? A 50 caliber (S&W)? I said no, just this old Walker with a short barrel. He smiled and said "Oh yes, I see! It sure is loud! We were wondering what you were shooting"!!! Hahhahahahhaaaa!

I fired a total of 18 rounds, and then left for home. As I was loading my equipment into my Jeep, a man and a woman (his wife?) were standing near me, and said that my gun was really loud. I said, "That's the main thing", and we all laughed!

My detachable loading lever worked perfectly, just as I had hoped.

I still have the final shaping and finishing left to do. 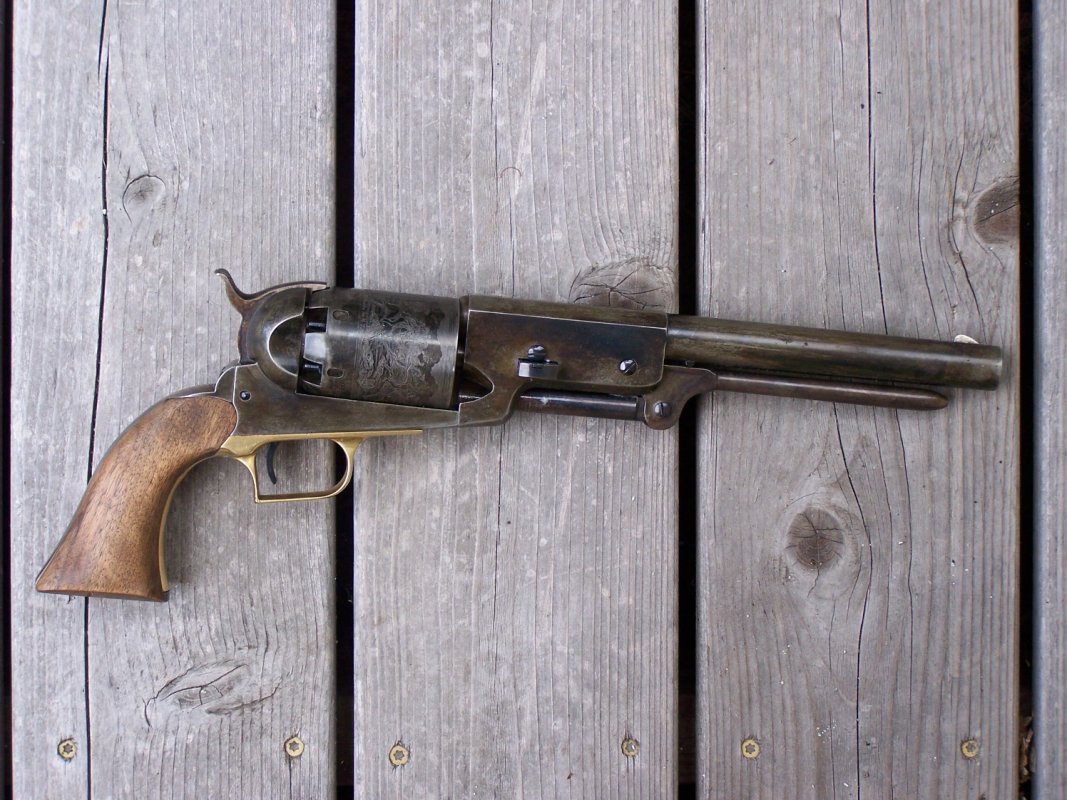 First time out today with Pugsley: 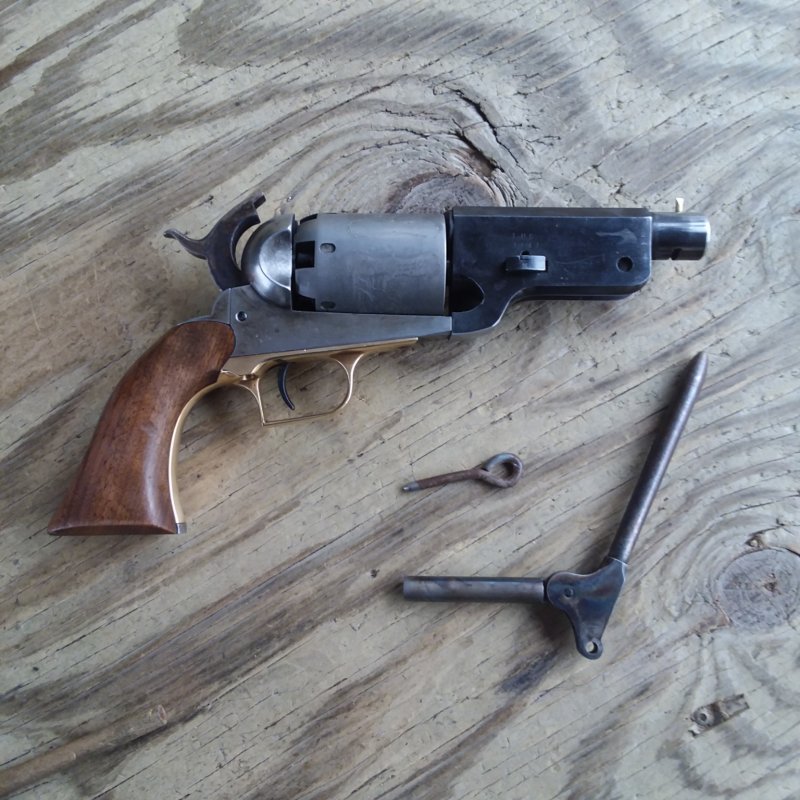 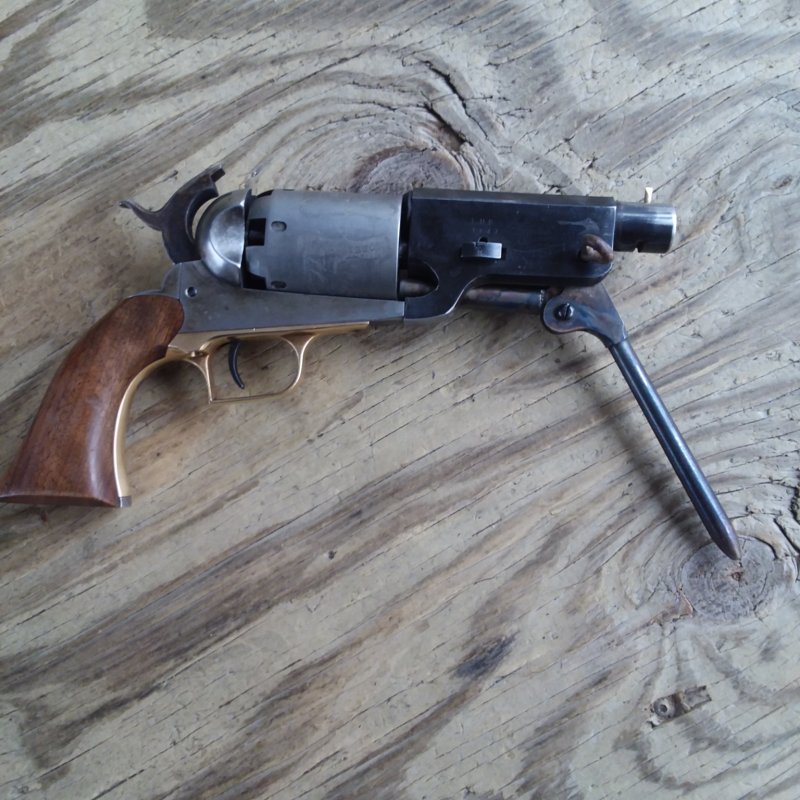 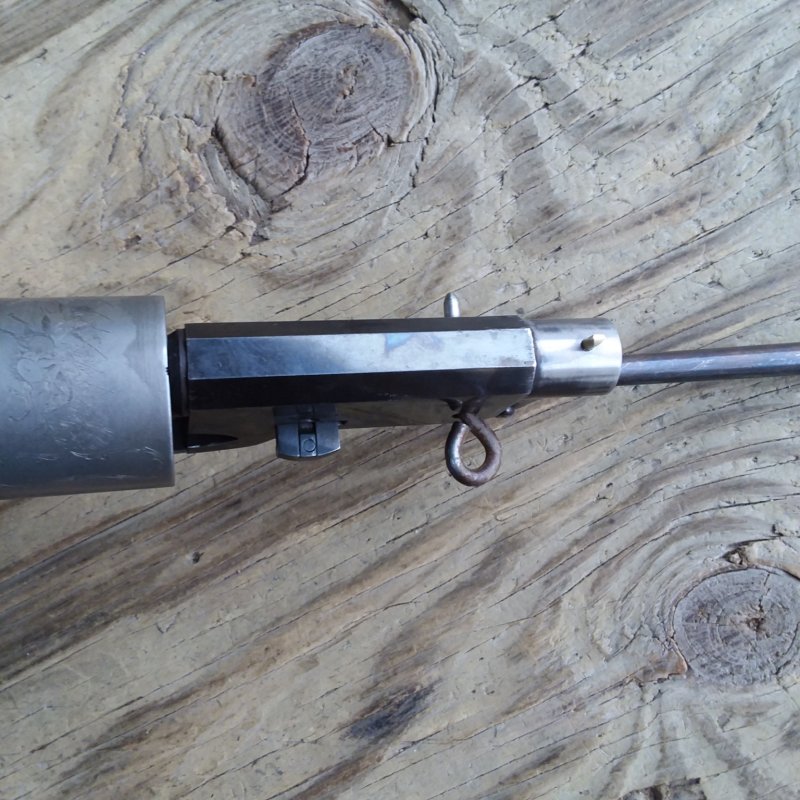 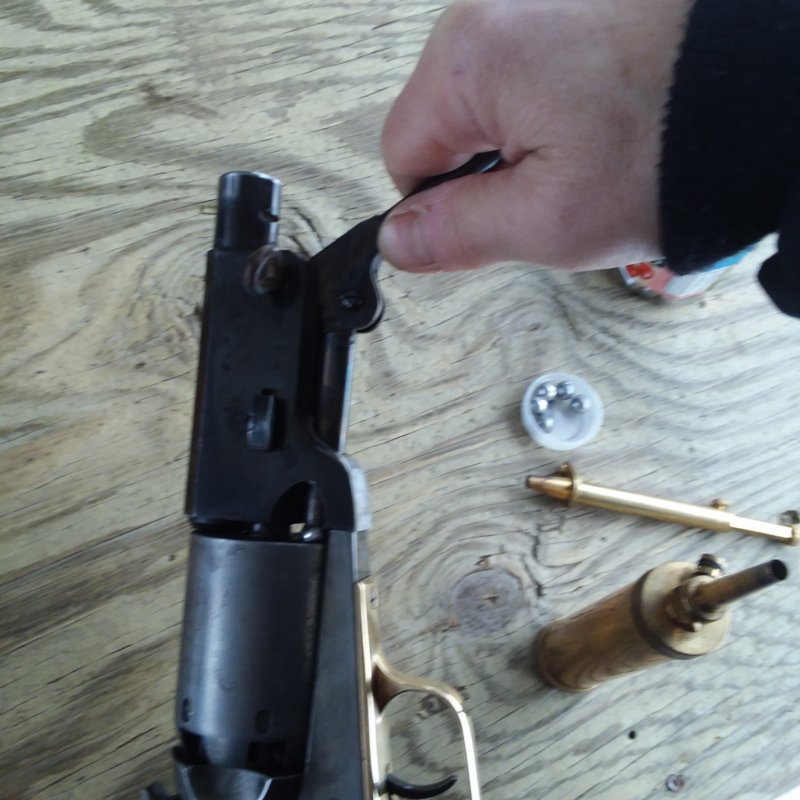 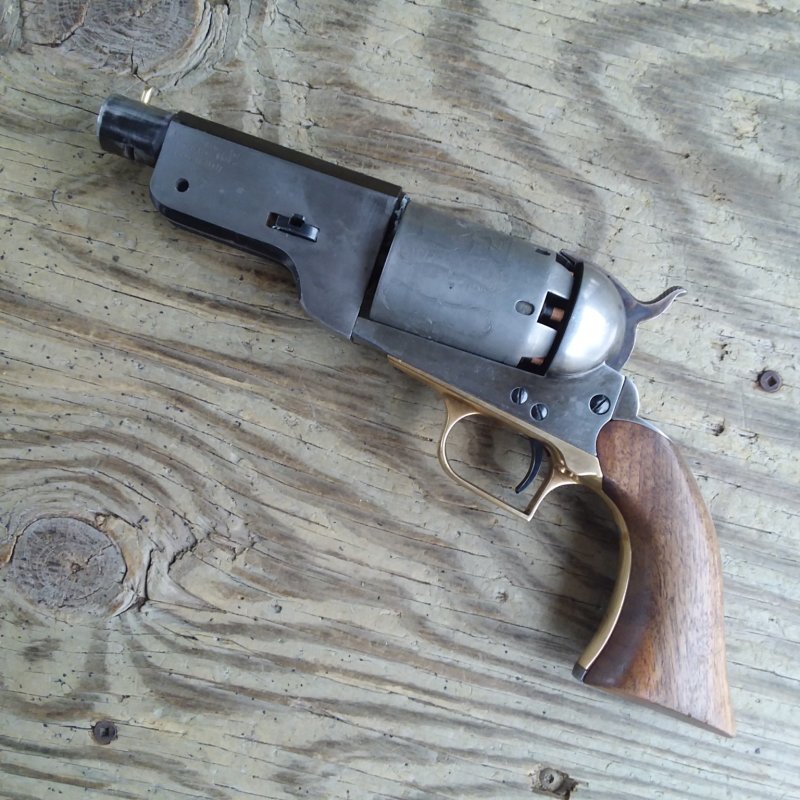 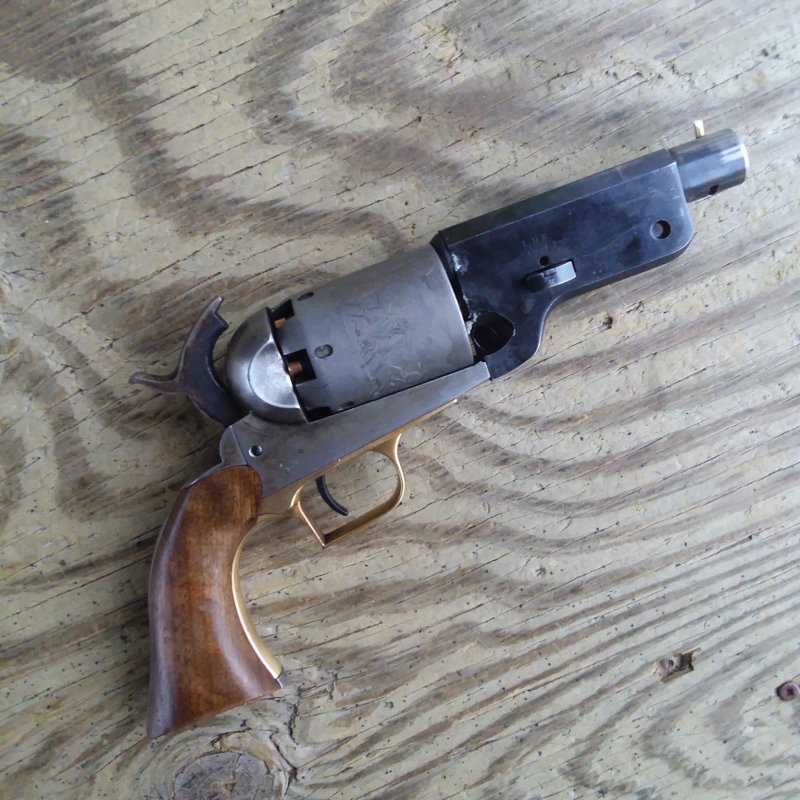 Next time there is fresh snow on the ground, see how much unburned BP is on top of the snow.

There was fresh snow. It was snowing lightly at the time. I didn't see any un-burned powder. I suppose it all burned in the fireball. It would be interesting to chronograph it, and compare the velocities of identical loads in the two different length barrels.
Last edited: Jan 14, 2021

So that's how you solve the problem of the Walker's falling loading lever! Haha Cool idea

Yeah, that is pretty clever with the loading lever. Gives me an idea for a future project!

Nice little snubby. Now you just need an ankle holster for it. I always thought a snubby Walker or Dragoon would look really cool with the round portion of the barrel cut completely off, leaving just the angular portion. Maybe not real practical, but very cool looking and fun to shoot.

Musketeer said:
Nice little snubby. Now you just need an ankle holster for it. I always thought a snubby Walker or Dragoon would look really cool with the round portion of the barrel cut completely off, leaving just the angular portion. Maybe not real practical, but very cool looking and fun to shoot.
Click to expand... 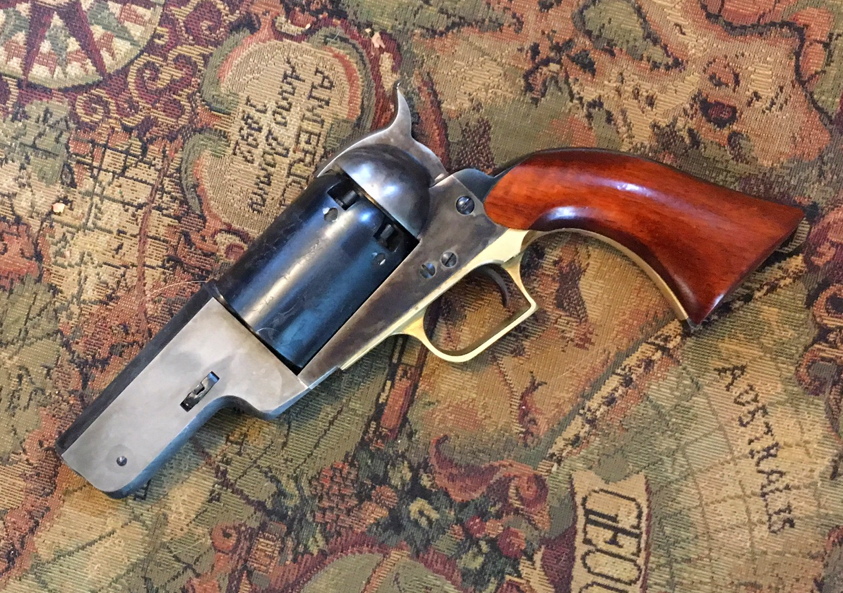 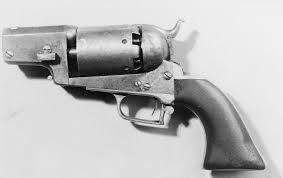 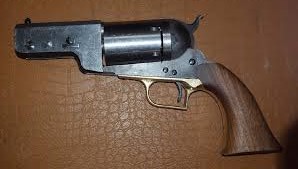 so put fake barrel on it.. walk up to the line and let it fall off.. shrug your shoulders and shoot anyway.. watch all the range Karens go nutz

^^^ I could just duct tape the cut-off stub back in place first, and after it falls off, say "Hmmm... I thought that would fix it."

Now I'm jealous. Thats what I was going to do just too many projects. Looks good.

jdesro said:
Yeah, that is pretty clever with the loading lever. Gives me an idea for a future project!
Click to expand...

Here is a picture of the barrel before mutilation, as sold to me by flinter1977. 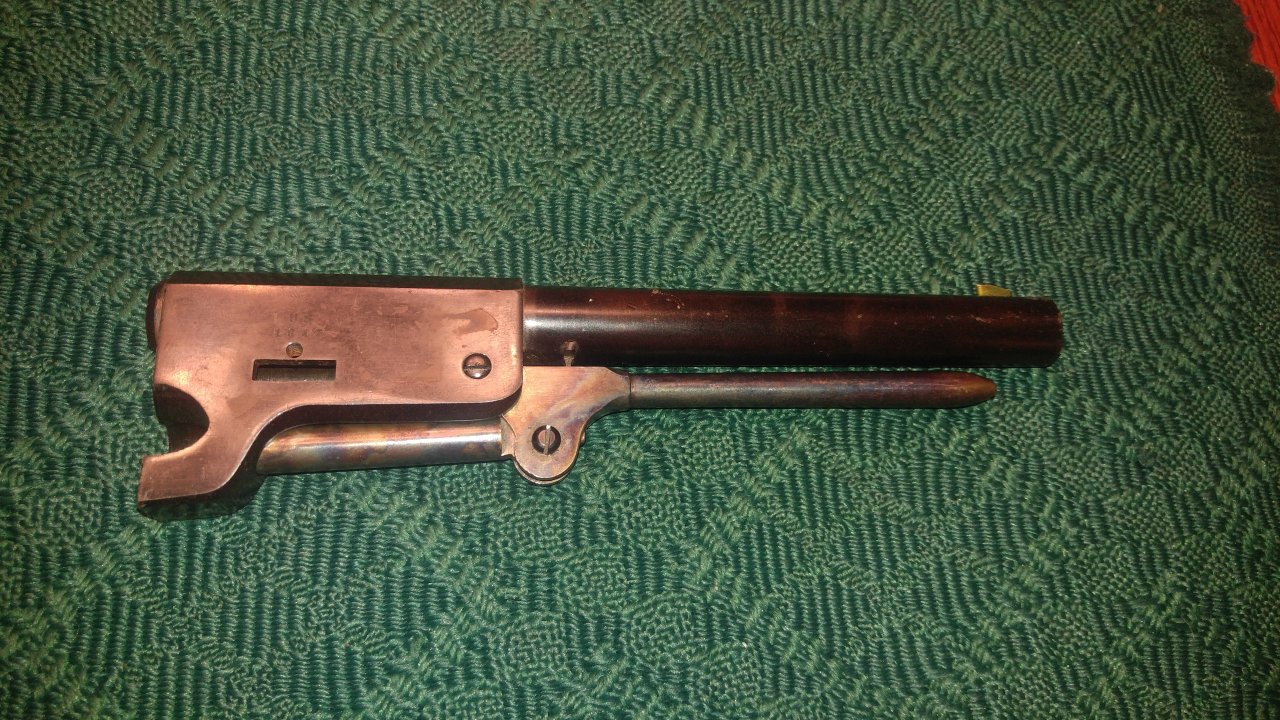 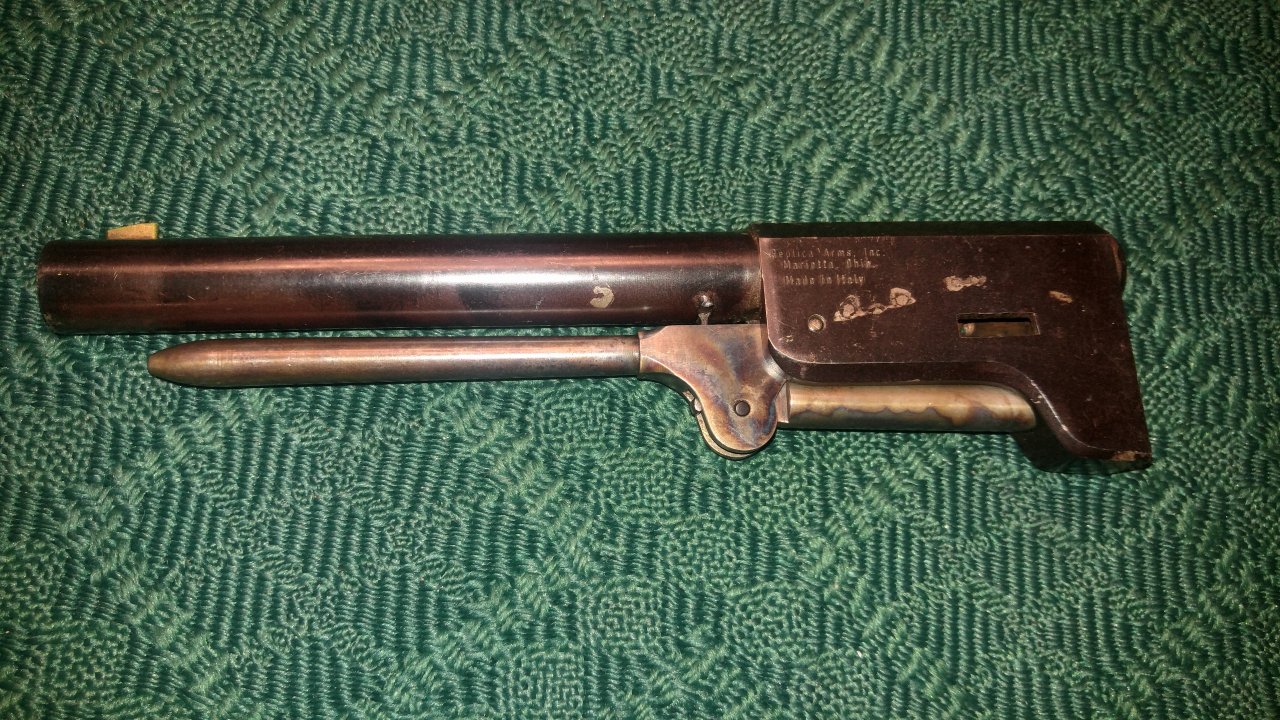 The “Pocket Walker”, for the man with big pockets, and suspenders.

B P Arn said:
There was fresh snow. It was snowing lightly at the time. I didn't see any un-burned powder. I suppose it all burned in the fireball. It would be interesting to chronograph it, and compare the velocities of identical loads in the two different length barrels.
Click to expand...

You should also fire a few rounds at dusk... pictures please

First I made a metal tab out of a thin piece of stainless steel. It worked, but I didn't like how it looked.

Timber Wolf said:
The “Pocket Walker”, for the man with big pockets, and suspenders.
Click to expand...

Yank that out of your drawers to fast and your shorts will probably be swinging in the breeze hooked by the front sight post !

That there's what you call a "shootin' arn".

This is the coolest thing I’ve seen in a while. That’s a pocket monster not a pocket pistol!

I made a new front sight for it yesterday. This one will be less likely to catch on clothes, holsters, skin, etc.

I still have to fill the slot under the barrel where the loading lever catch used to be. 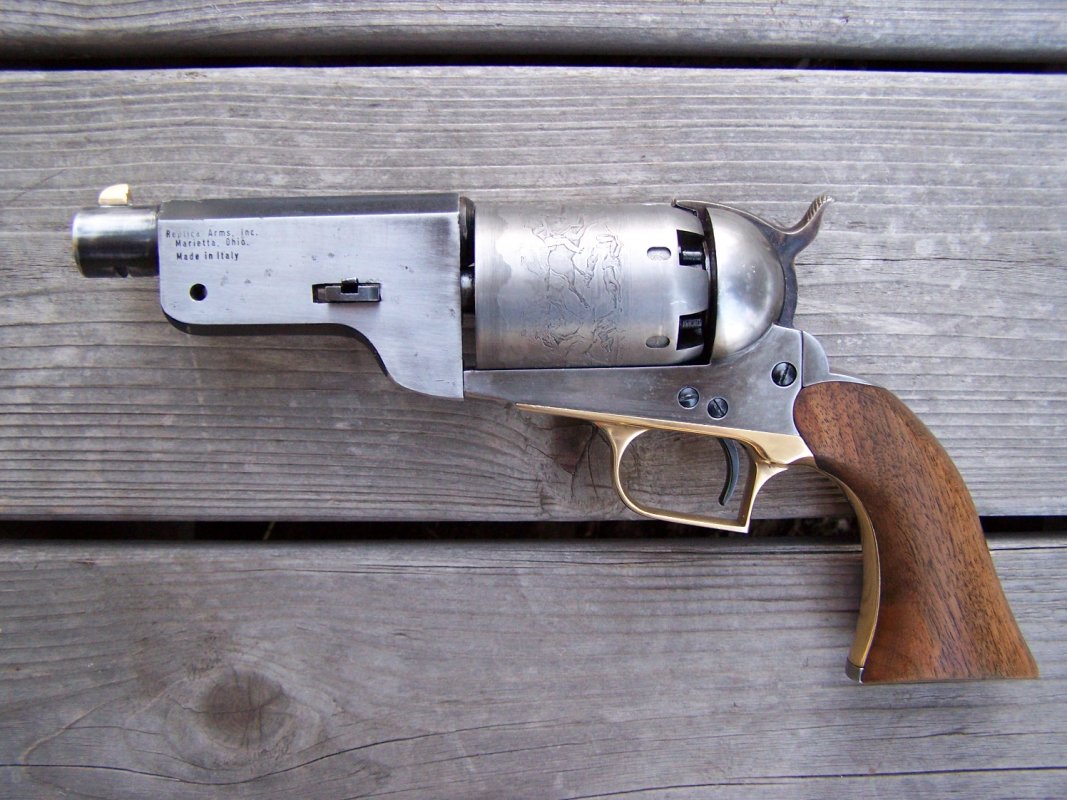 I had time today to finish what I wanted to do on my Walker. I made a filler for the slot where the loading lever latch used to be. I made it out of a small piece of scrap steel I had in my garage. I made the part a few thousandths of an inch over size, and then forced it into the slot. It was a very tight, solid fit. Then I carefully filed away the excess metal, and then polished the area.

After that I put a small amount of cold blue on the barrel to try to match the finish on the rest of the gun. 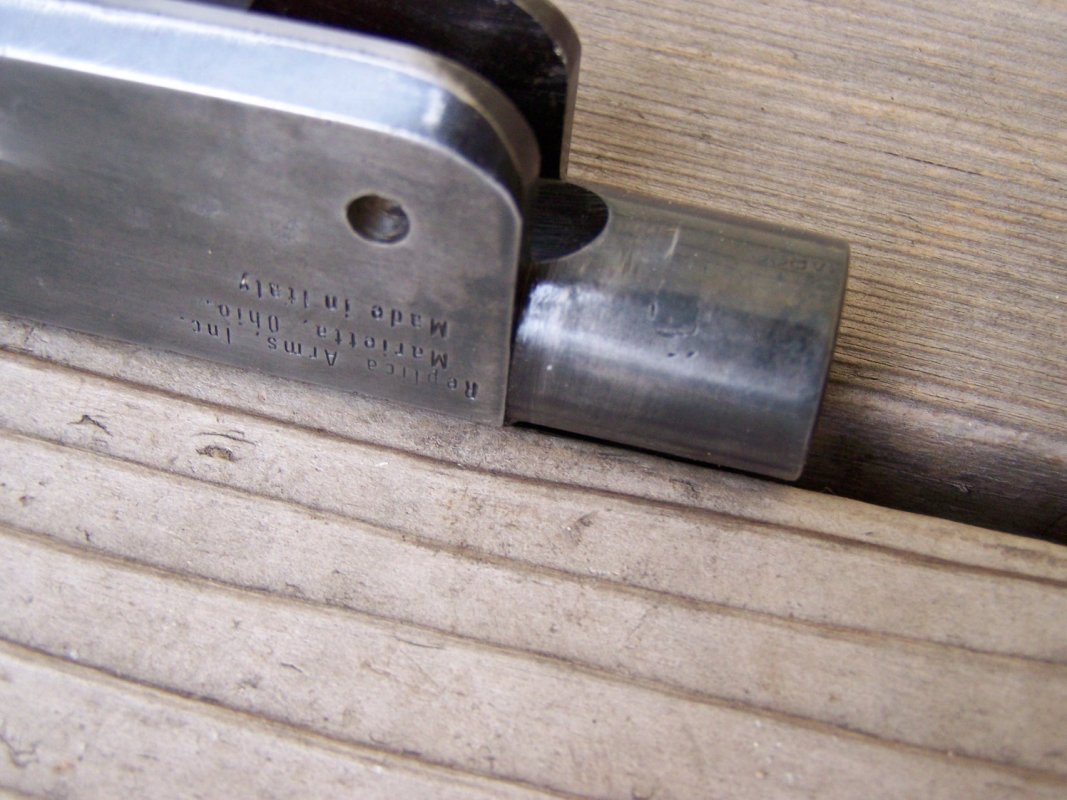 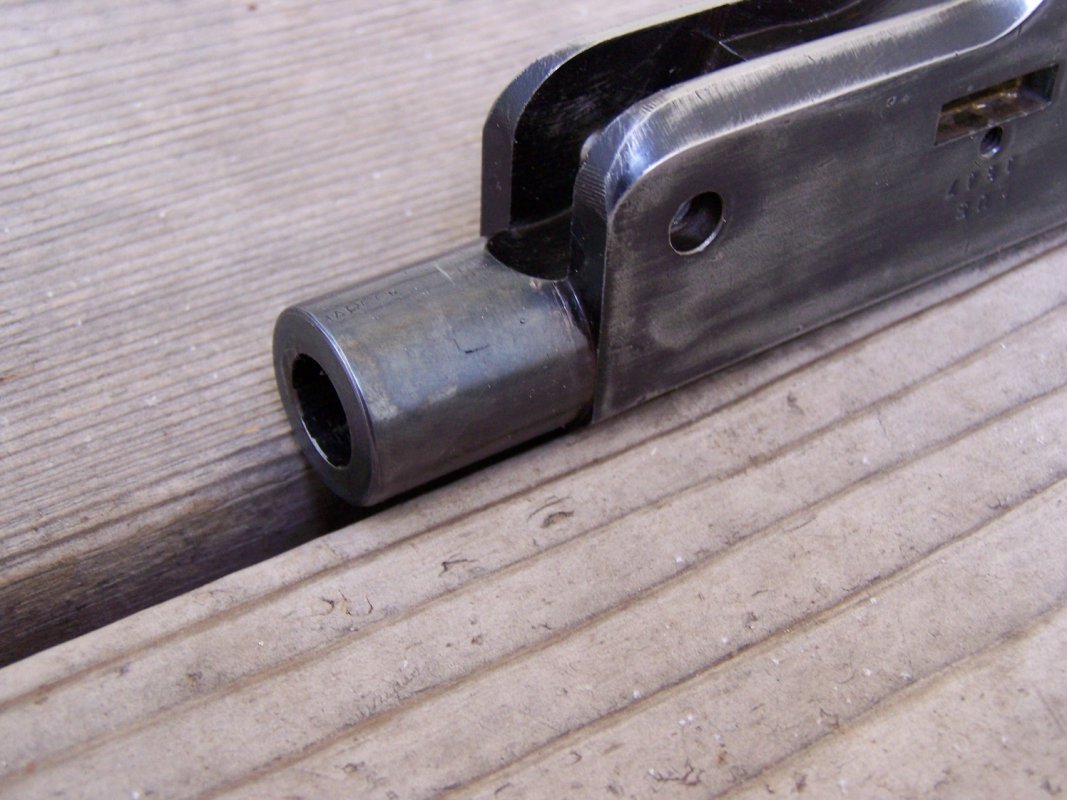 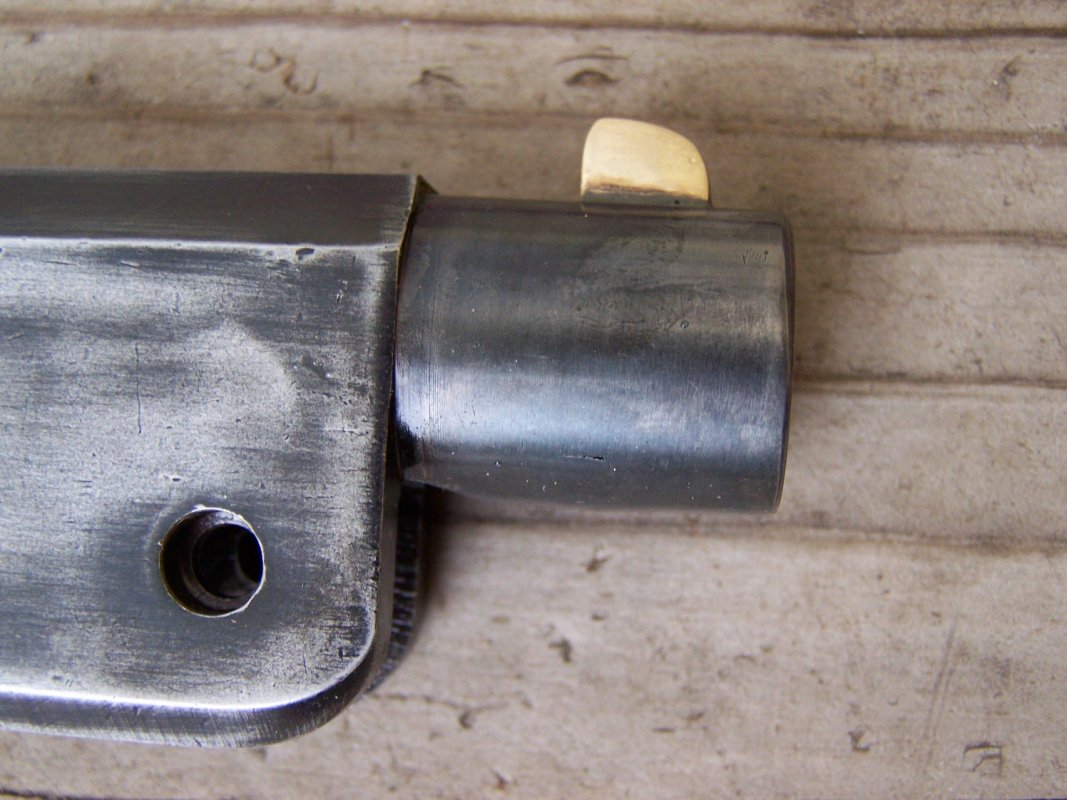 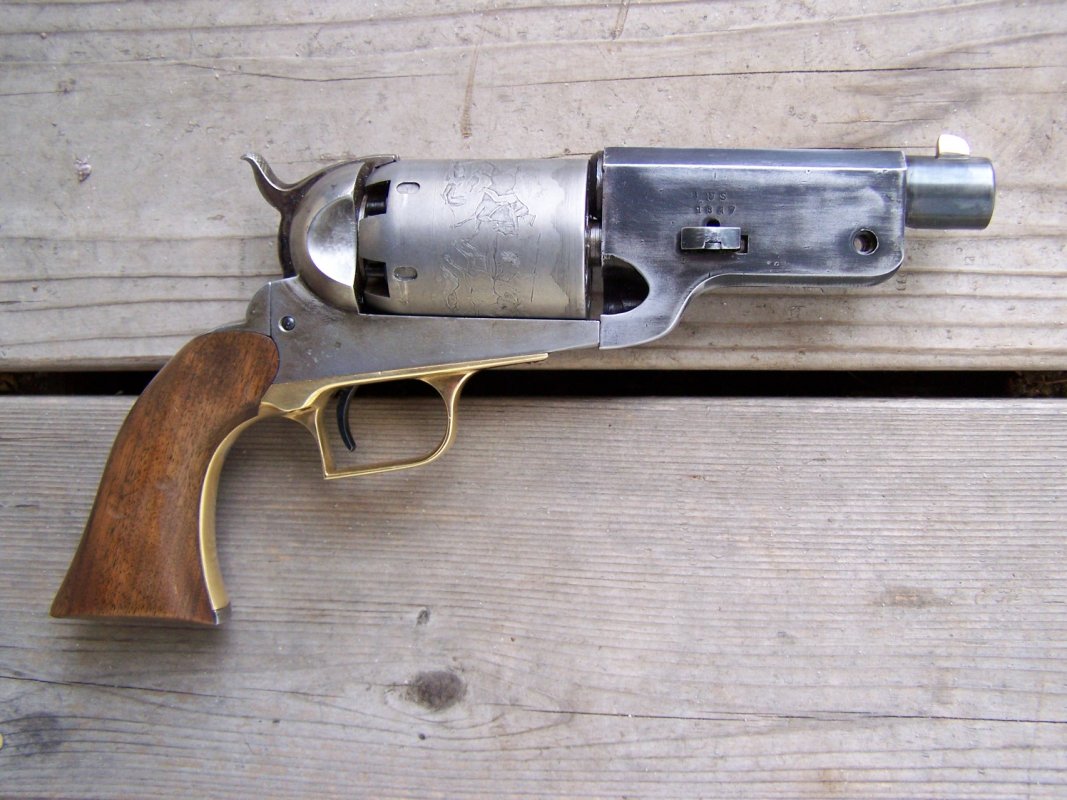 I'm done now with the gun! 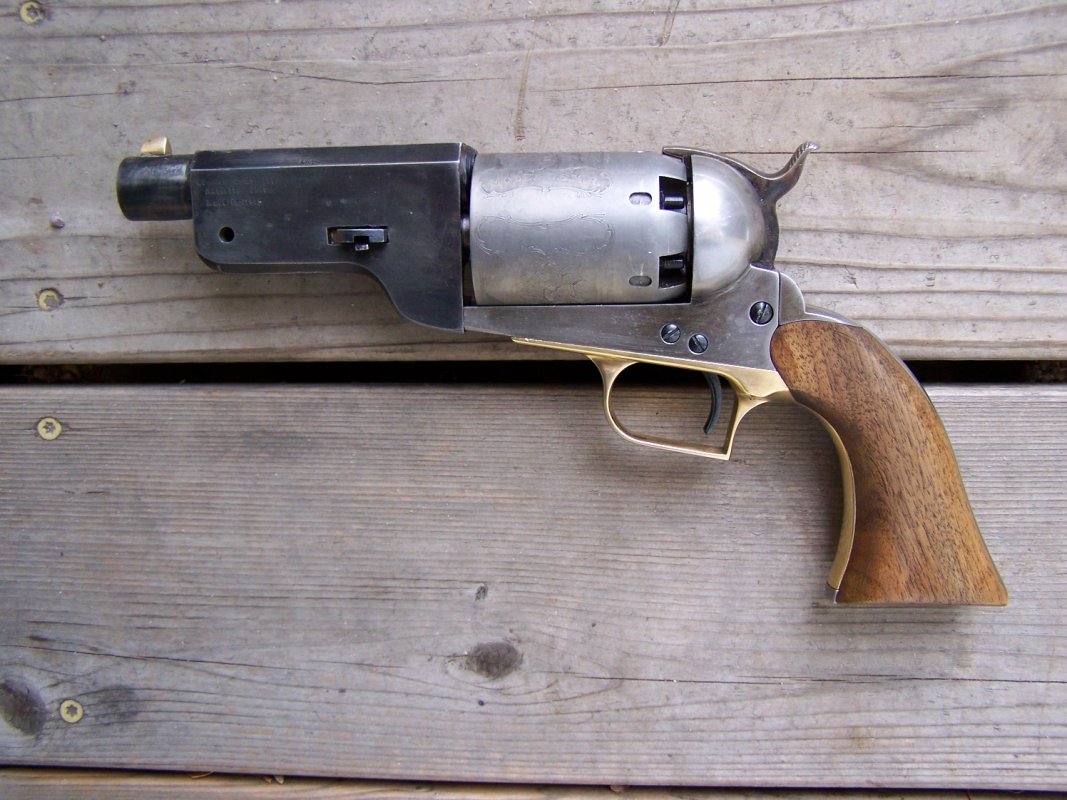 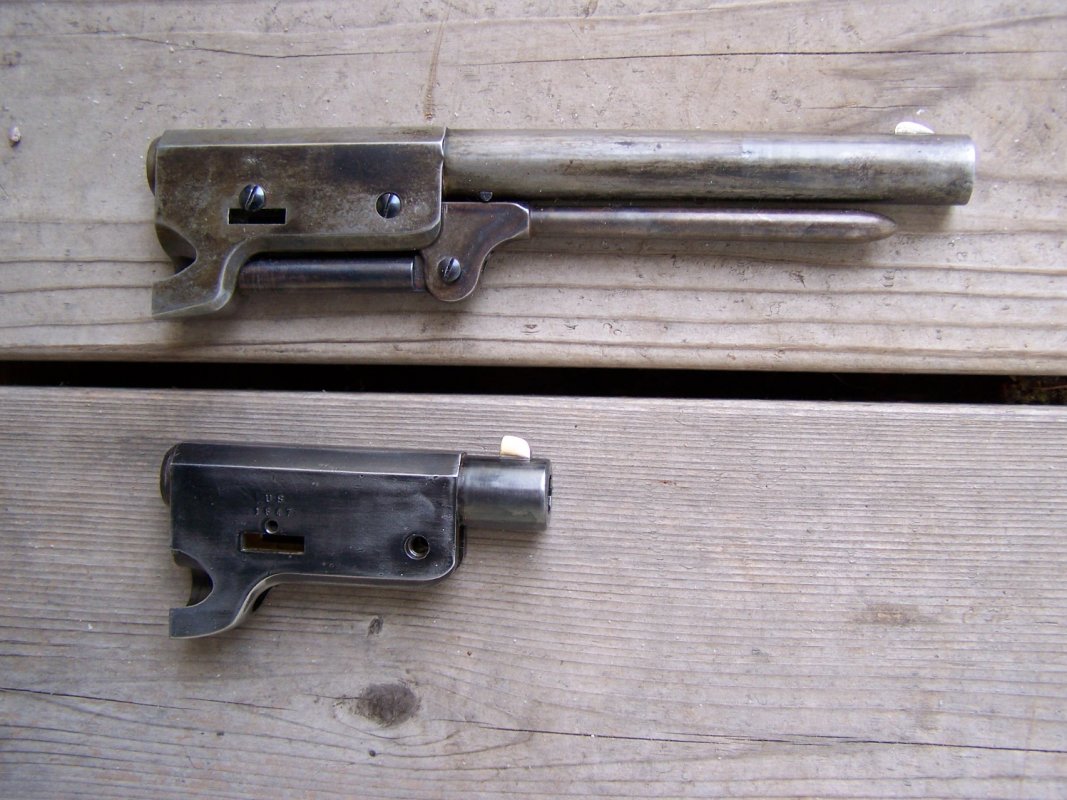