New to me Lowell Haarer Bear Pistol - Just in time for Deer season!

are they shot using two hands?

Hillbilly Delux said:
I would love to see someone put a kit together for a bear pistol. I have planned on building one for some time. Maybe Chambers it Kibler will take that task on.
Click to expand...

I would, too! Jim Chambers has a kit for "Colonial Pistol" with a 13" rifled barrel. I actually corresponded with him some earlier this year, and asked about the feasibility of fitting this pistol with his small round-faced English lock (instead of the standard small Siler) and with double set triggers, which were often seen on these long-barreled pistols. His answer was a gentle but firm "no" to both questions. I also asked about the possibility of a "Southern Bear Pistol" kit, but he again answered "no." Mr. Chambers sells these kits as a business, and he has to make a living at it. A tremendous amount of work goes into developing these precision kits, and he just didn't think he would sell enough of them to justify the time and effort expended in R&D. I respect that.

I also asked Bob Roller about making double-set triggers for a pistol. He responded that he had made a few, and could make them again, but would need exact drawings of the stock profile also showing the position of the sear. I was unable to provide that, and pretty much abandoned the idea.

So, a precision kit would be great for those of us who are interested, but until or unless we convince those who produce them to create and offer such a kit, we'll need to rely on custom builders. Bob McBride's pistol, by Lowell Haarer, is a beauty!

Chambers has a pistol with a 13” barrel.

toot said:
what is the unfinished pistol hanging up?
Click to expand...

That’s an unfinished kit from Brad Emig at Cabin Creek. It’s one of three on my winter list.

Toot, they absolutely can be. I shoot this one must like a rifle with no butt.

These long barreled bear pistols are fun to shoot and extremely accurate,. This is 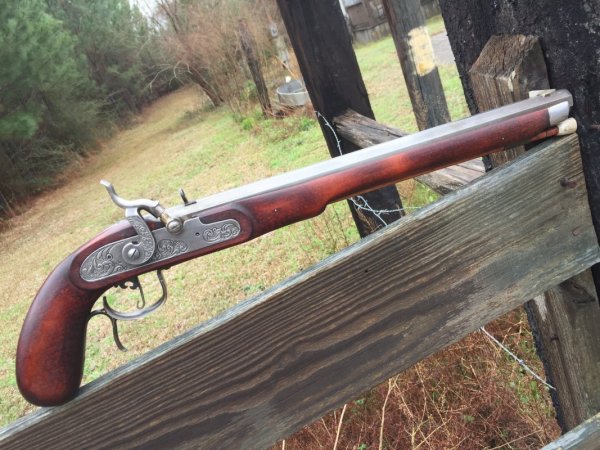 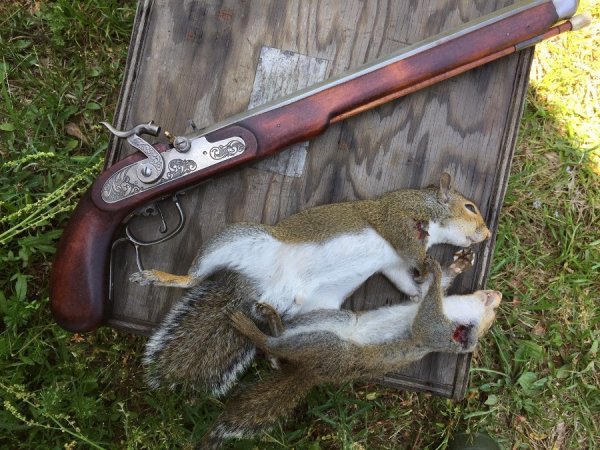 one I built from a cut down rifle barrel and parts I had laying around my shop. The barrel is 1 in 48 twist which is not supposed to be an accurate pistol twist. The last picture will attest to its accuracy. it's .50 cal with a 15 inch barrel
T

Bob McBride said:
That’s an unfinished kit from Brad Emig at Cabin Creek. It’s one of three on my winter list.
Click to expand...

thank you for the come back to my question.
T

Bob McBride said:
Toot, they absolutely can be. I shoot this one must like a rifle with no butt.
Click to expand...