Yesterday was my birthday and a guy who went to the same high school as I did came by and gave me 2 blackpowder guns. Both are .50 cal and both are CVA kit guns. A Hawkens rifle and a Kentucky pistol. Pretty awesome! The rifle has a great double set trigger, both of them are caplocks.

He is moving out west and wasn't going to take the guns with him. He said they would just get rusty sitting at his parent's house and wanted them to have a good home.

I'm excited to shoot them but they haven't been fired for many years. Is there anything I should be concerned with or just clean them and test fire a moderate load?

azsixshooter said:
Yesterday was my birthday and a guy who went to the same high school as I did came by and gave me 2 blackpowder guns. Both are .50 cal and both are CVA kit guns. A Hawkens rifle and a Kentucky pistol. Pretty awesome! The rifle has a great double set trigger, both of them are caplocks.

He is moving out west and wasn't going to take the guns with him. He said they would just get rusty sitting at his parent's house and wanted them to have a good home.

I'm excited to shoot them but they haven't been fired for many years. Is there anything I should be concerned with or just clean them and test fire a moderate load?
Click to expand...

First thing I see is the rifle and the pistol have no ramrod (unless you took them out for some reason). That would make loading it rather difficult.
E

Buy a stainless field rod(5/16" diam. is a handy size) with a muzzle guide and proper jag plus a ball puller. A wooden rod can be bought at the same time. I would wipe them out to check the bore. Then make sure the flash channels are open and pop a couple of caps while holding the muzzle on a leaf or grass to see if it moves at the cap pop. Then shoot it. The CVA rifles were accurate for the money.
R

They both look like they are in really good shape. Yes, just check to make sure they were not left loaded. Clean them well and lubricate the locks. 20-25 grains for the pistol and start at 50 grains with the rifle. More than likely the rifle will settle in at 65-70 grains.

axsix, Deer Creek Products can most probably help you out with ram rods, jags etc. They carry a lot of parts for CVA.

Thanks guy! I actually have a delrin range rod and rod accessories for a .54 cal Hawkens I'm working on building so I can use some things. I'm going to order a set of .50 cal accessories eventually so I can keep all my .50 cal stuff separate from my .54 cal stuff. I'm excited to shoot these guns, I've never fired a ball out of a muzzleloader before. I'm sure it will be a great time!
M

I'm sure it will. I have yet to see someone try it, that didn't enjoy them self.

rafterob said:
Yes, just check to make sure they were not left loaded.
Click to expand...

The number one rule whenever you pick up a muzzleloader, even the ones you own and are sure are not loaded.

A short tale on myself. I have been shooting muzzleloaders for over 60 years. About 6 years ago, I went to the range with some friends to shoot one, a 56 caliber German Jaeger I had rebuilt.

I picked up this original German Jaeger off of Gunbroker for $140. I figured the lock alone would be worth the cost. When it came in I was pleasantly surprised as it's in much better shape than I thought it would be in. The barrel/bore is in very good shape, no rust or pitting. It is marked...
www.muzzleloadingforum.com

As usual I snapped a cap before loading to check the flash channel and to my utter surprise a big boom and dirt flying up about 10 yards down range. Embarrassed is an understatement. I always follow the second rule which is have the muzzle pointed in a safe direction. I got to thinking how did that happen? I had shot it a lot after I rebuilt it and even went hunting with it. The only thing I can figure happened is I didn't unload it on the day I was in the woods. Must have gotten distracted and didn't go out the next day, hence the gun was put up loaded.
T

I have had several B/P guns given to me over the years by friends, all gifts from the heart, they are very special to me.
F

Always check these old guns to see if there has been a charge left in the most give away is if there is a hammer missing , I have lost count on the number of guns that I have come across on my many decades of restoring . It is quite common in the States to leave a gun loaded for some time I remember a good friend of mine who lives in the states left his gun loaded in the fall and in the spring never thinking he loaded it again , the result could have been very serious and when he fired it the recoil was so severe that the hammer spur damaged his head just above his eye if it had been lower he would have lost a eye My opinion is never leave a gun loaded a accident can happen to you or someone standing next to you
Feltwad

I absolutely agree that your first attention to these guns is to verify that they are not loaded.

If you've never fired patched round ball (PRB) before, I highly suggest you start with either a damp type patch lube, such as Hoppes Black Powder Solvent and Lube, OR if you use some other type of patch lube such as bore butter or animal fat, then just swab between shots. Otherwise it is easy for fouling to build up and you wind up with either a PRB stuck in the barrel that you can't get all the way down on top of the powder, or the jag, cleaning patch, and rod stuck in the barrel. Ask me how I know.

If you swab between shots it is a good idea to then pop a cap before loading again to ensure the flame channel is clear and you didn't push fouling down into it.

I don't know your level of experience, so disregard if you are fairly knowledgeable.

1. Have a few different thickness patches. I'd go with .490 RB and have .010" thick cotton, .015" thick cotton, and .018" pillow ticking for example. Start with the thin .010" and if it's too loose or groups aren't great, go up to the next size. If the .015" are fairly tough to push down the bore, DON'T bother trying the .018". You can also collect shot patches about 10' out from the bore and examine them for how they are holding up. Badly burned up, holes, tears indicate too thin of a patch, or poor patch lube application, or old patches if pre-lubed store bought, or a burr or something cutting them in the barrel.
2. Start at 50 grains of powder. Stay with this load until you iron out what patch thickness loads the best and has the best accuracy. Then start upping the powder charge by 5 grains at a time and shoot groups. So, shoot a 3 or 5 shot group at 50 grains, then do it again at 55 grains, then again at 60, etc. etc. until you find the best load the rifle shoots. Don't exceed the max load per the rifle manufacturer. You'll likely find it somewhere between 70-90 grains.
3. If you load the rifle and then only get a pop out of the cap but the main load don't ignite, especially after swabbing the bore:
wait to make sure it isn't going to be a delayed ignition fire. Remove the nipple and put some powder down into the flame channel, put the nipple back in, and try it again. It will usually go off.
4. Don't use too much patch lube. If you use a wet style patch lube you only want them damp. By damp I mean the feel wet but you can't squeeze anything out of them. If a bore butter or fat/lard style, then just apply enough to fill the weave of the patch. It doesn't take that much, but make sure it is rubbed clear out to the edges.

Sorry I wrote such a novel, but Dutch's recent post about first time muzzleloader shooting reminded me how poorly my first time on my own went. haha

Congratulations on acquiring two more muzzleloader’s. They look to be in pretty descent shape.

Here is a link for those ramrod’s if you want original replacement’s my friend.

Here at Deer Creek Products we specialize in all your muzzleloading needs. We carry a wide variety of CVA parts along with ASM and Pietta.
www.deercreekproducts.net

Here at Deer Creek Products we specialize in all your muzzleloading needs. We carry a wide variety of CVA parts along with ASM and Pietta.
www.deercreekproducts.net

Thanks so much for the links and all the great info guys! I got some work done on my .54 cal Hawkens Flintlock build tonight and I'm getting really close to being able to start final sanding of the stock. It's been a long time and I'm excited to see how it looks when I'm finished! I don't want to rush it or cut corners, but I've been working on it for so long, I'm dying to shoot it!

Now that I have these .50 cals I can start shooting them now and take the pressure off of hurrying through my Lyman GPR kit build.

That info about checking to make sure it wasn't left loaded is so critical, I completely understand the importance of doing that now. And I really liked the tips for lubing and finding a good patch/ball combination. I actually have a bag of .490 balls and some .010" prelubed patches I can use. I ordered a rod accessories kit for .50 cal and it should be here tomorrow.

With any luck I'll be able to get the rifle cleaned out and inspected and maybe fire a group! Thanks again, you've all been very helpful.

I take the breech plug off of all my used purchases. I’ve found 150 grain loads, rocks, rock salt and one time a stash of hidden cash The gun paid for itself !

Well hell boys, that was FUN!

I haven't pulled a breech plug on used guns I've purchased. I just haven't felt the need to do it. My used gun purchases have be modern reproductions. I do inspect the bore and breech area and clean them before firing. I would be more careful about what I did if it was an antique.

20 grains of FF over a .490 ball with a prelubed .010 patch got great results at about 10 - 15 paces for my first black powder pistol shot. Wild Bill Zuccinni's days of plundering the coach are OVER! On a side note, is it preferred to use FFF in pistols like this one? Thanks for any help! 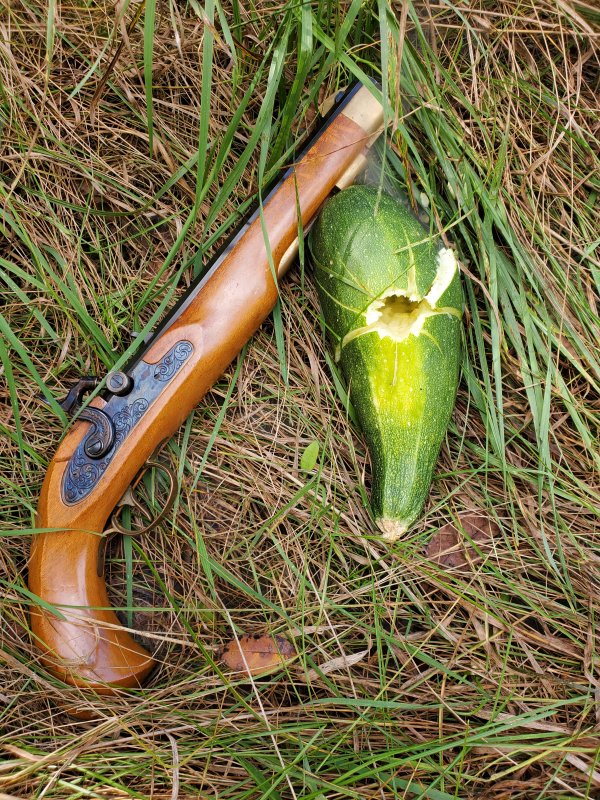 Usually, 3Fg powder is recommended for pistols because it burns a little faster than 2Fg powder. That gives the ball a little bit more velocity but as your dead zucchini shows, 2Fg will work just fine. Especially in the larger bore guns like yours.
S

Poor zucchini! What did he ever do to you?