If you want to raise the front sight to experiment, glue or tape a small piece of credit card plastic or something similar to the front sight. If it’s too tall, snip it off with a pair of scissors. That will give you an idea of what exactly needs to be done before any metal work.

Pa17233 said:
Hi names Chris new to the forum, I have a question was shooting a cap lock my dad left me an it shoots about 6-7 inches high at fifty yards. That’s with the back sight lowered all the way down any suggestions on how to lower point of impact ? I’m shooting 60 grains of FF goex an a patch an 128 grain round ball 45 cal I’m look to hunt with it farthest shot be 60 yards. Any information you have would be appreciated thanks
Click to expand...

Items to think about............ Are you getting a decent group? Is the charge adequate for the game you want to hunt? Make sure your charge is no more than factory recommendation! Once you have group and powder charge OK, then mess with the sights. Fill in the information on the sight calculation adjustment web page--------------------->Sight Correction Calculator <-------- When you know how much correction you need cut the back sight blade down about .010 short of the calculator's figure. Test fire and field file for final on the gnat's butt.
Larry
B

Pa17233 said:
Correct all shots where off a solid bench
Click to expand...

With some sort of softer bag, right?
Never rest your rifle on a hard surface, just checking.

Here's an example of a tall front sight if you decide to go that route. 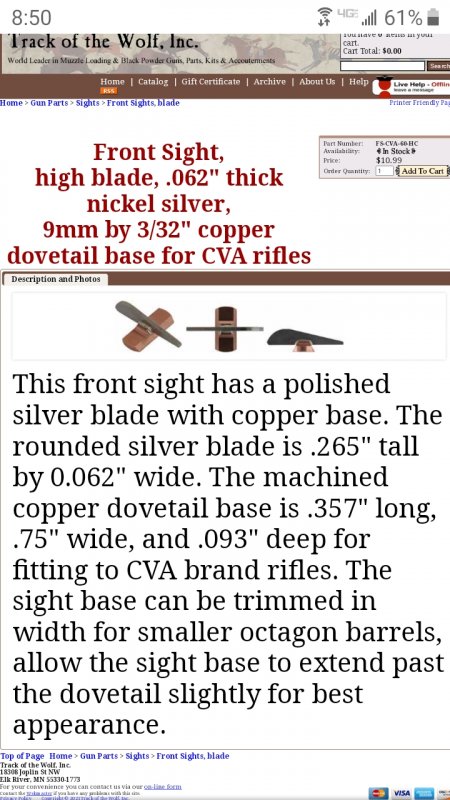 Some things to think on/try:

UM..., not necessarily, ..., sorry have to disagree. That only applies with some loads.

IF the previous owner set the rifle up to use a light load, like for targets only..., then that trajectory would not double by the time it made it to the 100 yard mark. In fact it may have been sighted with a very light load to exactly hit the 100 yard mark.

Increasing the powder, IF it did anything at 50 yards it would raise the point of impact, as it would reduce the flight time from you to the target and thus reduce the amount of time that gravity had to pull downwards on the bullet.

Assuming you have a good group, and that your load is sufficient to hunt large game IF you are going to go hunting..., check local laws to see if there is a minimum load..., so assuming those two things...,

The EASIEST and least expensive way is to (as previously suggested) get a tall front sight post. I'd suggest the tallest, thin silver front sight post.
After you swap it out..., you put some masking tape on the barrel just before the sight, and just after it up to the muzzle. This will protect your barrel as you file.
You take a moderate flat file with you to the range. Shoot a test group, and then slowly file off the font sight in teeny tiny amounts, elevating the POI until it's where you want it at 50 yards. THEN try it at 70 or 100, and see if you want it at those distances to be higher. Continue to file, BUT remember that as you do the POI at 50 will be increasing too. When done at your max range, test it at 50 or at the half-way point.

As for loads before you do the sights... I was taught many methods, but one that works fine is you take the caliber and round to the nearest ten..... if the caliber ends in a five, you round up. So you would use 45 grains AH but rounded up by 5 would be 50 grains to start. Then go up by 10 and try 60 and perhaps another 10 and try 70 grains. I'd use 3Fg but you can use 2Fg if you wish. Somewhere between 50-70 grains you are likely to find a very accurate load. Then double check it if you wish by subtracting 5 grains for one test group, and adding five grains for another. IF you don't see an obvious improvement, stick with the load you have found.

Then adjust the sights.

I agree with Dave. Sounds like your rifle was set up for a 6 O'Clock hold. Lots of target shooters set up their guns so they can put the front sight on the bottom of the black bull (easier to see) and the bullet will print in the 10 ring. If it puts all the ball near the same hole but 6" high then you have a target gun. Lots of good advice here to change your sights to hit point of aim.

All good advice above. My 2cents:

1) Google "ardesa spain muzzleloader" and a bunch of stuff will come up. Read the Randy Wakeman article on dangerous muzzleloaders.

2) Deciding to go forward with this, or any other muzzleloader, for hunting the first step is to decide what load you are going to shoot at your quarry. What is the twist rate of your gun? Patched ball or conical?

3) Next decide how you are going to shoot when hunting. Out of a clean barrel or a fouled barrel?

4) Shoot your proposed load, otherwise loaded as it will be for your first shot at that deer, at a BFT (big flippin' target, say a 4ft x 4ft something with a small orange dot in the middle) and don't worry where your POI is, just shoot for group. This is where you vary your powder, perhaps your patch thickness, or try a few different projectiles if your rate of twist requires conicals. Find a grouping and load that works for you.

5) THEN work on adjusting your sights to your load.

Again, just my 2cents worth.
G

I suggest getting a copy of NMLRA’s Eric Bye’s book on Flintlocks and seeing if it doesn’t have a chapter on Sighting In. You can lower point of impact by lowering rear sight height or raising front, or a combination of the two, or holding with the top of front sight below the top of the rear one, etc. (Scota’s calculation seems ballpark, but you need to measure your sight radius.). Sometimes a hotter powder charge will paradoxically lower point of impact (ball leaves muzzle quicker before muzzle rises as much), but that effect depends on your stance, firmness of grip, drop in stock, etc etc. It’s worth trying a 5 shot group to see, since it doesn’t involve non-reversible filing.

BTW, If you’re happy with the style of the rear sight, you can get a front sight base from Track of the Wolf which would let you file out a blade of whatever height and profile you wish and solder or even epoxy in place: then if it isn’t satisfactory you can replace the blade with another. Good luck.
M

Changing the front site is easy. You might go with that.

gerryherd said:
. Sometimes a hotter powder charge will paradoxically lower point of impact (ball leaves muzzle quicker before muzzle rises as much), but that effect depends on your stance, firmness of grip, drop in stock, etc etc.
Click to expand...