A few years back while perusing a local pawn shop, I came upon a plains rifle shoved back in the corner among it's more modern counterparts. I asked the owner if I could take a look at it and he told me, "those guns hadn't been cleaned yet." He wasn't busy at the time and as I had a good relationship with him (Mostly because I had bought several guns from him in the past). He let me look at it. It was dusty and needed a good cleaning. It was missing the ramrod and after fondling it for a bit we came to an agreement that I could have it for $150 the way it was - and no returns. I opened my wallet, pulled out the credit card, grabbed the gun and with a smile left. I found a temporary ramrod (still need to get a good hickory one), gave it a good cleaning and went out to the range. It shot wonderfully but I couldn't get it to half cock. Back home I took the lock off and noticed a lot of grease and dirt buildup, something I had neglected on the initial cleaning. I cleared it out with carburetor cleaner then oiled it up. Once back on the gun I slowly pulled the hammer back and walah! the definite click of half cock. I haven't fired the gun for three of four years but pulled it out after getting re-excited again about muzzle loading from joining the forum. It's a beautiful gun but I don't have a clue as to what it is or even who might have 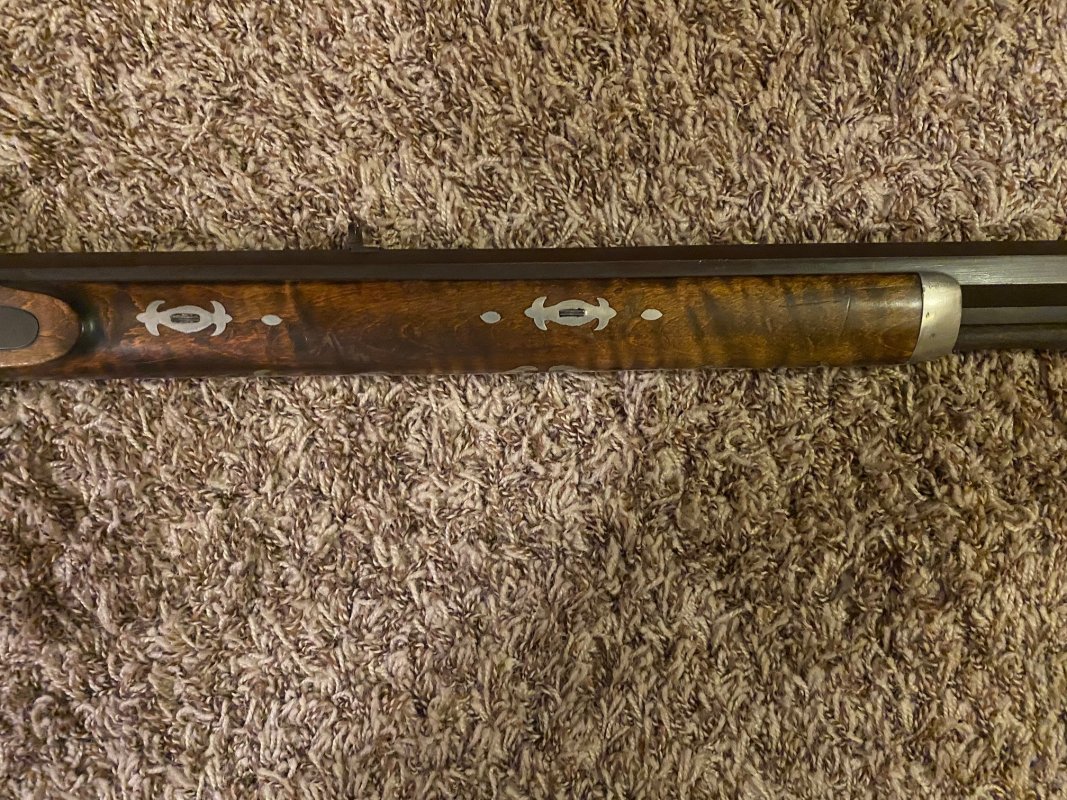 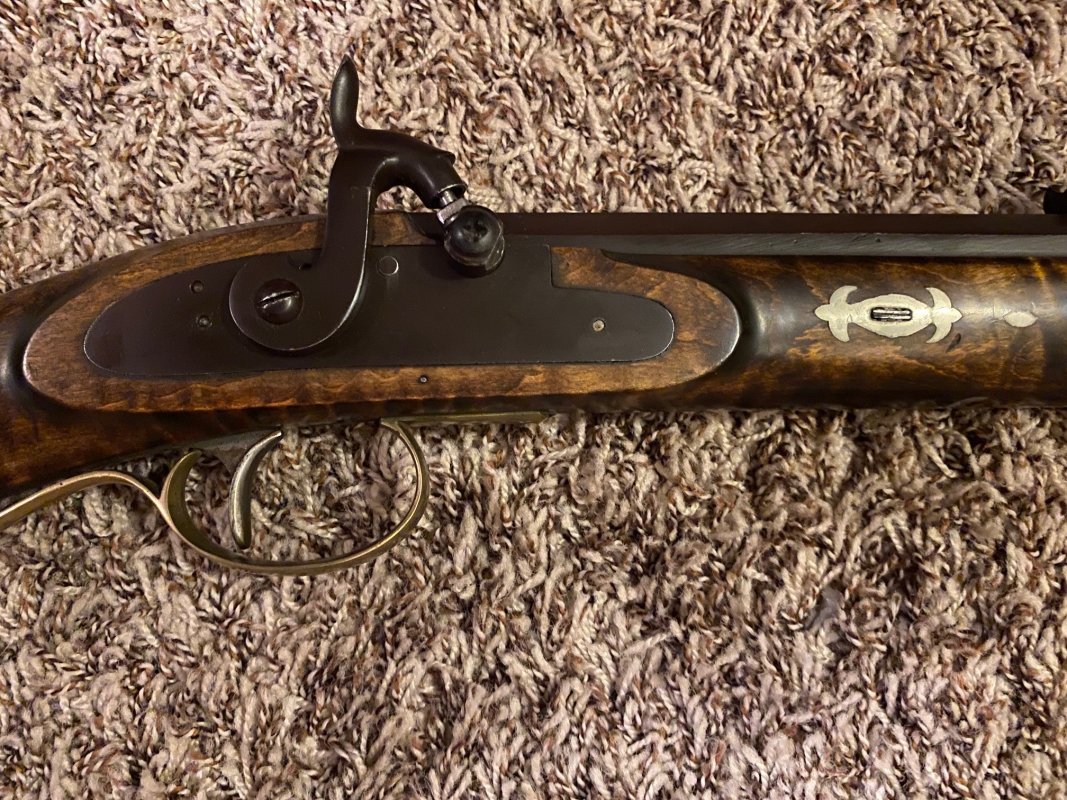 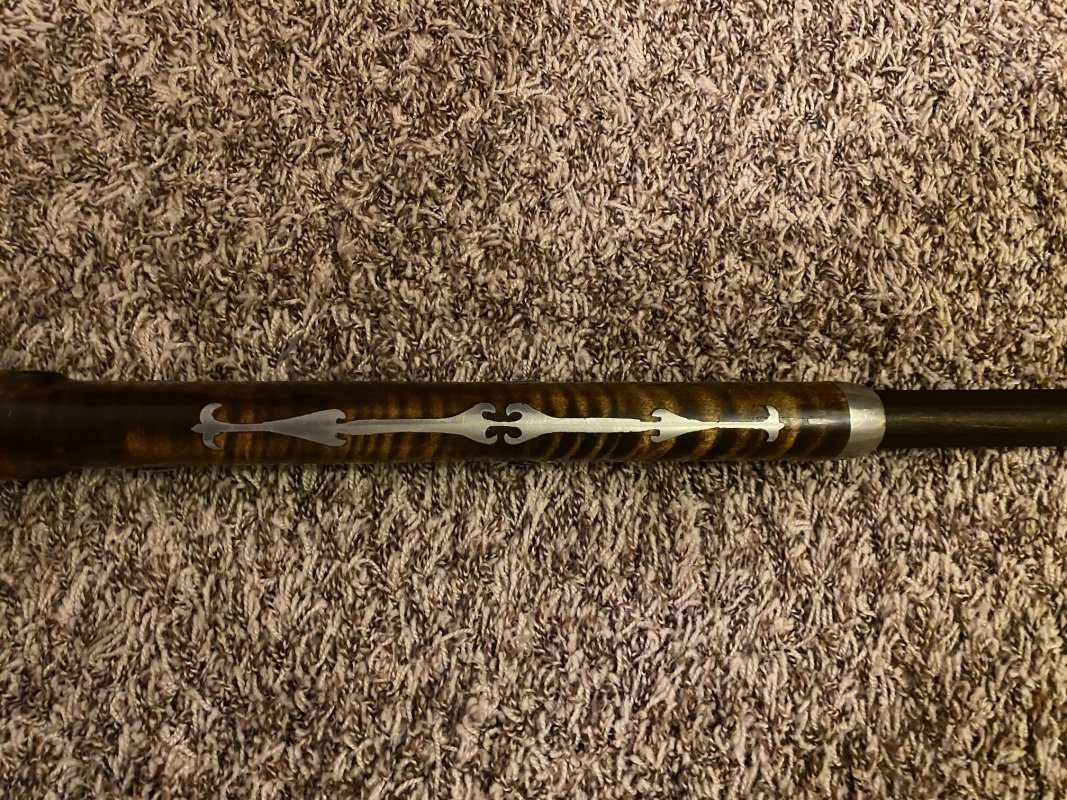 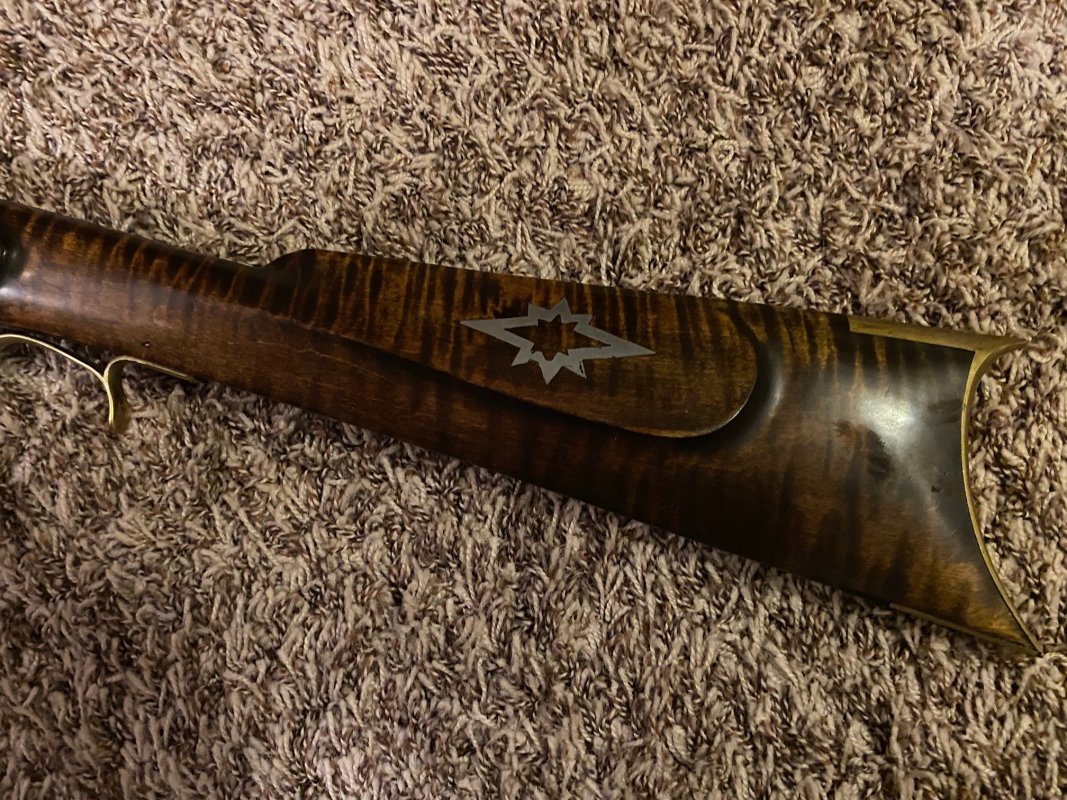 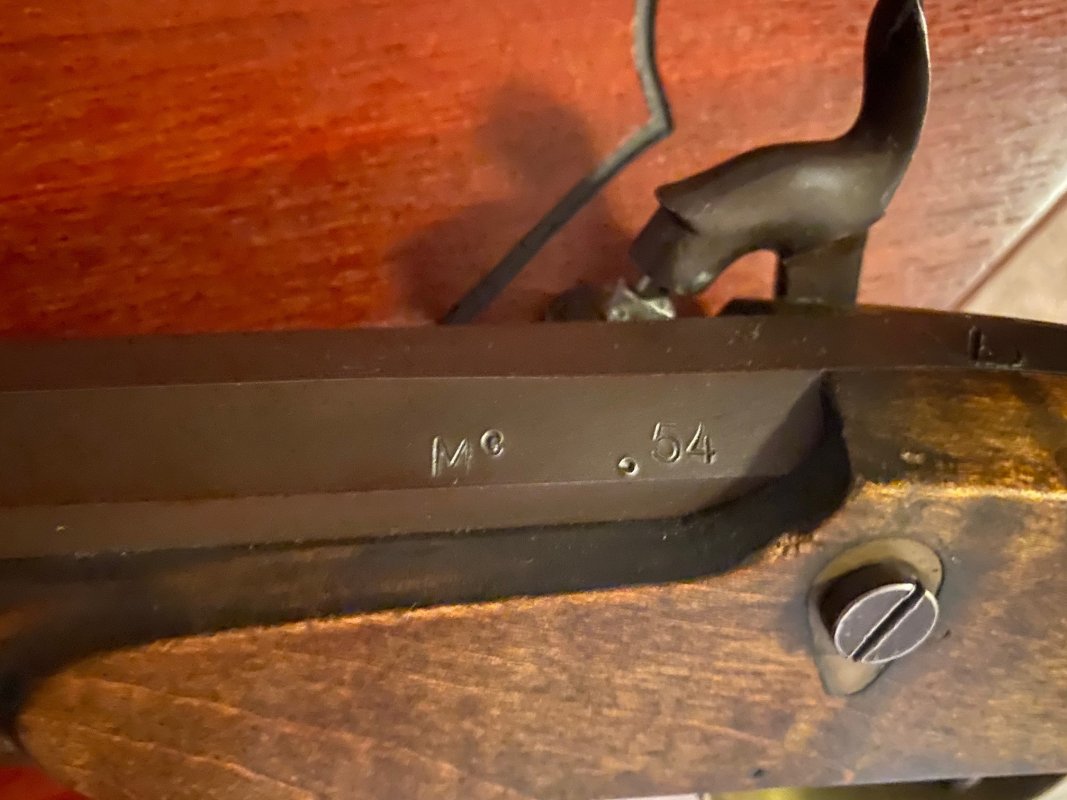 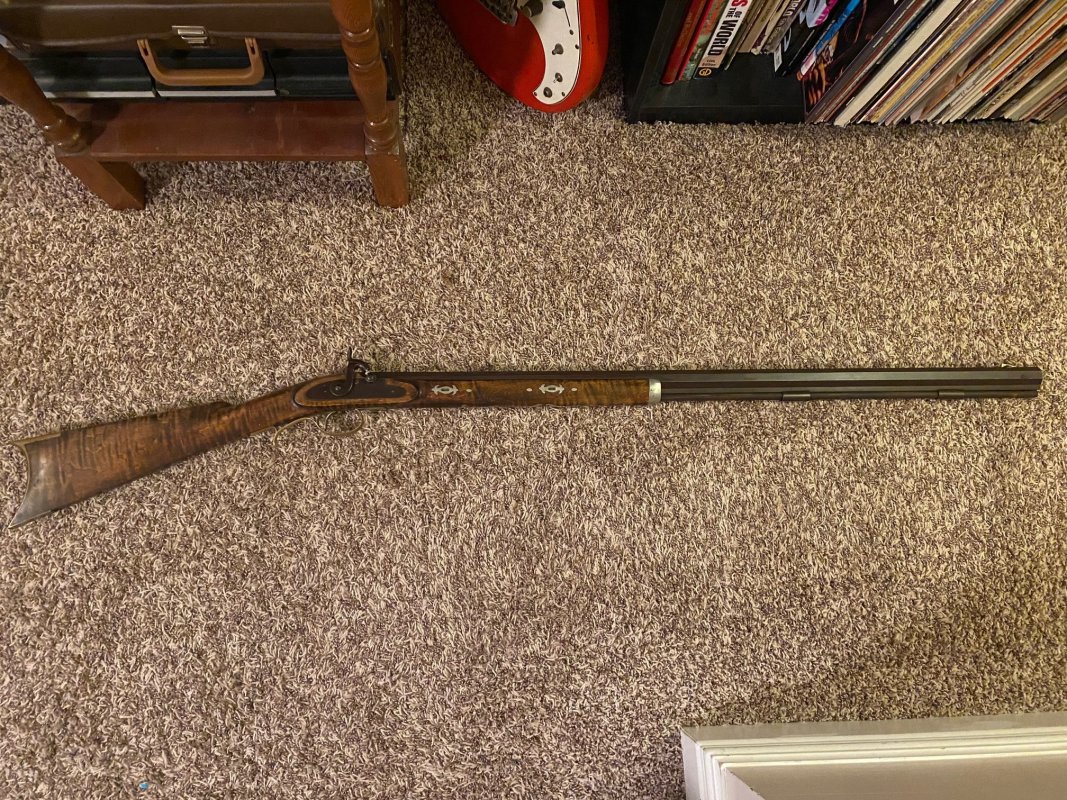 made it. I'm posting some pictures with the hopes someone out there can throw me a bone. Even to identify the brand of barrel (36 inches) or the lock (short throw of about an inch) would be of great value to me. The only markings on it is shown in one of the photos. PS. Yes I do need to replace the bolster clean out screw with a non Phillips head!
Last edited: Sep 24, 2020

Nicely done rifle. No clue on the maker.

I don’t know either? Sort of looks like a trade rifle of some sort.

The rifle is custom made.
The lock looks like a R.E. Davis "Jim Bridger's Hawken lock". (That's what my old Track of the Wolf catalog calls it). The inlays are all custom made either from Sterling silver or German silver. I would bet they are German silver, (a nickle copper alloy).

What I'm seeing is at least worth over $800 and it would probably sell for over $1000 to the right buyer.

Zonie said:
The rifle is custom made.
The lock looks like a R.E. Davis "Jim Bridger's Hawken lock". (That's what my old Track of the Wolf catalog calls it). The inlays are all custom made either from Sterling silver or German silver. I would bet they are German silver, (a nickle copper alloy).

What I'm seeing is at least worth over $800 and it would probably sell for over $1000 to the right buyer.
Click to expand...

Thanks Zonie for your research. I think you nailed it. So I take it my initial investment of $150 paid off.

According to Track of the Wolf it was: "Designed by Ron Long, this famous lock was used by Green River Rifle Works of Roosevelt, Utah, on their Jim Bridger Hawken rifle. Track acquired the GRRW Bridger Hawken stock pattern." That being said I could most likely assume the barrel is a Green River. Makes sense as I live here in Utah

Despite it’s glaring short comings I’ll give you $155 for it.

giffiga, Zonie is correct. That is a Ron Long lock, though Ron did not assemble it. And you are probably correct on it having a GRRW barrel.

The "M" superscript "c" is the makers mark of Bill McKay who worked for Green River Rifle Works part time. McKay was a full time school teacher who worked at the GRRW shop after school and on weekends, and of course, during the summer when school was out.

Your rifle does not have a serial number or the "GRRW" over "ROOSEVELT, UTAH" stamp, so it's not a factory rifle. These are what I call "off-the-clock" rifles.

GRRW often had trouble making payroll. They would sometimes let an employee take parts in lieu of overtime pay. The smith would then build a rifle using GRRW's parts on his own time and sell it for a little extra income. I've seen these made by Carl Walker and Neill Fields. They generally have the gunsmith's makers mark but aren't serial numbered and don't have the company and address stamps.

Your rifle is the Leman Trade Rifle model. The standard model had a 1" x 33" barrel.

Bill McKay probably made the rifle prior to 1978 because around that time they switched from the Ron Long Hawken lock to the Siler Mountain Lock. The rifle appears to have the trigger guard and butt plate that Phil "Bluejacket" Sanders designed while at GRRW. Their factory rifles with these particular components were made in late 1976 and in 1977.

By the way, GRRW bought lock castings from Ron Long, Bud Siler, and others, then had employees that were pretty good locksmiths assemble them in their own shop.

If you take the butt plate off, you might see the "GRRW" mark on the inside of it like this. The other mark is Bluejacket's makers mark. 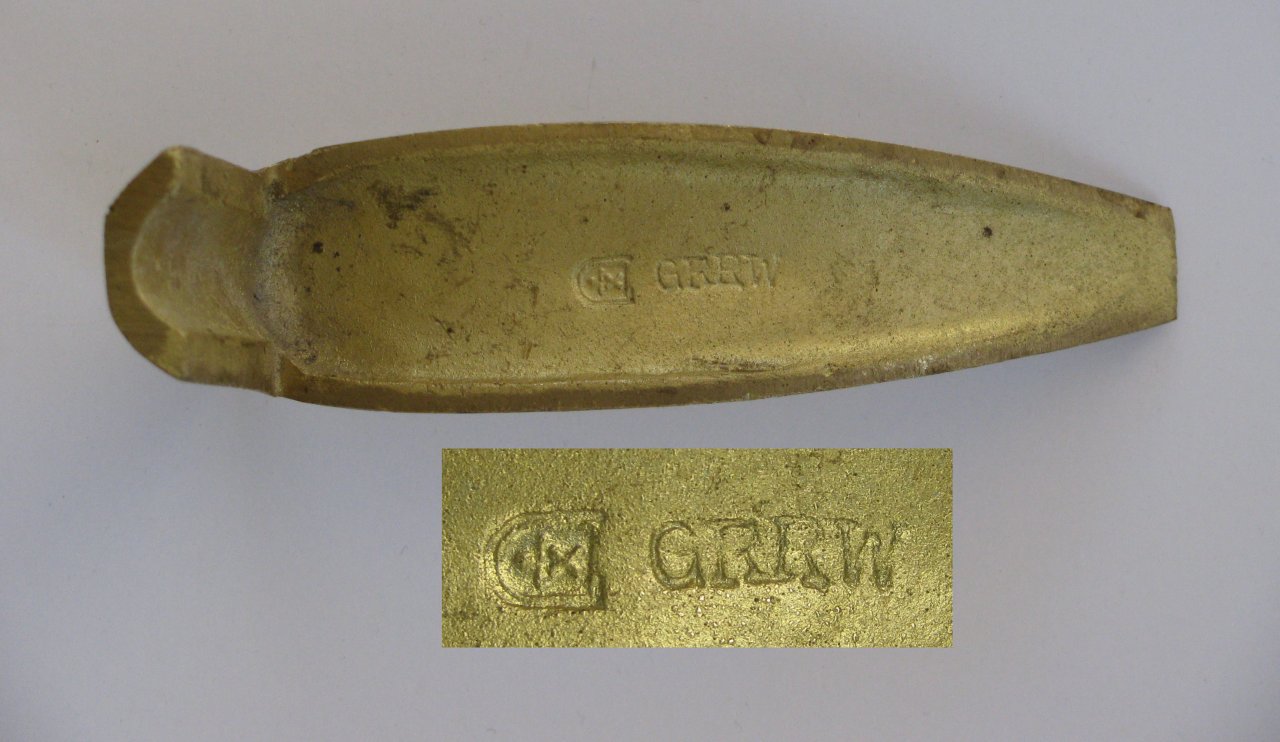 Zonie may be right about the inlays being German silver, but they look like pewter to me. You see very few GRRW rifles with inlays of any kind. I don't know that Bill McKay would have learned such skills while working there. I suspect that he cut out a shallow relief for the design in the stock and probably created some interlocking holes, then poured pewter into them. He then would have filed off the excess pewter and contoured it to match the shape of the stock.

I wonder if the dark spots in the photo of the cheek inlay are voids? 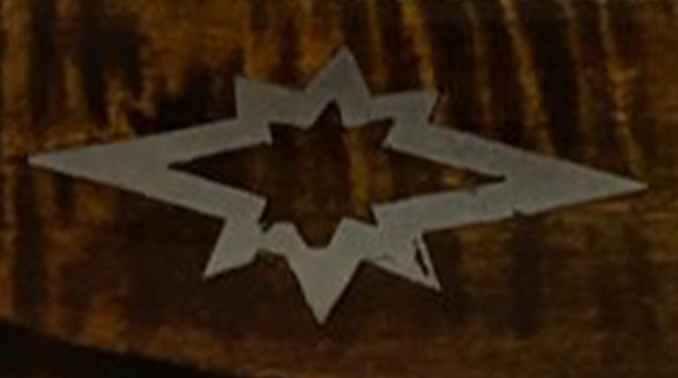 Thank you Phil for your enlightenment. I can't wait to get home and take off the butt plate. I will post what I find tomorrow when I get to my office. Yours and Jim's input has been most interesting. thanks again.
K

I have a couple of Neil Fields rifles, he made them long after he left GRRW. You have a real steal there, a really nice rifle, glad it has found a good home.

Thought that there might be a connection to GRRW. @griffiga, I think you got a great rifle for a very low cost.

griffiga said:
Thank you Phil for your enlightenment. I can't wait to get home and take off the butt plate. I will post what I find tomorrow when I get to my office. Yours and Jim's input has been most interesting. thanks again.
Click to expand...

Got home and removed the butt plate and guess what?

That's what I thought.

If you want to learn more about GRRW and their guns, check out my website, GRRW.org

plmeek said:
That's what I thought.

If you want to learn more about GRRW and their guns, check out my website, GRRW.org

Thanks for all your help and knowledge
T

it sure is a beauty. how does it group?
P

That is a beautiful rifle. Why can't I stumble into these deals?
M

Wonderful rifle. I am envious!
R

toot said:
it sure is a beauty. how does it group?
Click to expand...

It’s been a while since I’ve shot it, but from what I remember, I was hitting clay pigeons at 80-100 yards pretty regularly. Seems like I had to go to a .520 diameter ball with a .020 patch. It was a bit tighter than my TC .54
You must log in or register to reply here.
Share:
Facebook Twitter Reddit Pinterest Tumblr WhatsApp Email Link