On closeout for $4.75, item # AC511, from Natchez Shooters Supply. Adjustable from 50-120 grains, has hole in the base for a leather thong and comes with 4 plastic powdah storage containers, not that I’ll use them ... 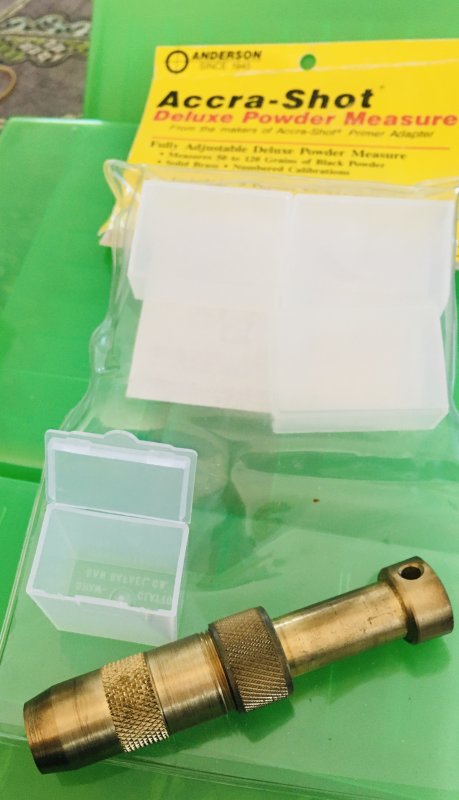 And what was the shipping charge?

Grenadier1758 said:
And what was the shipping charge?
Click to expand...

Good point! Well, certainly NOT worth it just to but this 1 item, but I needed a few other things, for BP as well as for ‘other toys‘ that go BANG too, so for me the purchase was well worthwhile. They do sell BP accessories though, so I bought some BP cleaning accessories too ...
O

Did ya check it w/ a regular powder scale to see how accurate it is??? Was shocked when I checked the five adjustable measures collected over the years. The closest one to actual grains stamped on the tube was 3 gr. fffg, and the most variation was 12 gr.. Thankful that black powder is very forgiving as to charge amounts. Must say , some one put a lot of nice machining on the measure.

I'll say you got a good deal!

Regarding weight versus volume, I don't think they ever come out even with black powder. I discovered this years ago. I had a powder flask with a variety of spouts, some marked and some not. I decided to weigh the charges dropping out of the unmarked spouts, and kept coming up with odd, arbitrary amounts, like 27 grains, 41 grains, and so forth. Intrigued, I weighed the charges from the marked spouts and obtained measurements that were uniformly less than the amount marked on the spout. I was annoyed. I discussed this with a more knowledgeable friend who said it was his understanding that volumetric measures were calibrated by corresponding weights of water. I have not tested this. If he was correct, a 100 grain measure, level full, should hold a quantity of water that would weigh precisely 100 grains (note there are exactly 7,000 grains in a pound). A charge of black powder, in the same measure, level full, would weigh less than 100 grains because black powder is lighter than water.

In addition, finer grained powders weigh more than coarser grained powders because the granules compact more... There is less air space between them. So if you get higher velocity and better performance with FFFg than with FFg, it's not just because the smaller grains burn faster. It's also because you are effectively using more powder.

If you ever get in a conversation with an N-SSA shooter and discuss powder charges, you may be surprised at the exactness of his charge, but also how puny it sounds. One fellow told me he shot 41.6 grains in his .58 caliber rifle musket, for example. The reason is most of these fellows are obsessive about consistency, and they weigh each individual charge.

I don't think this necessarily has to concern us much. Your average shooter in the 18th and 19th centuries got along all right, and I doubt the average fellow back then had access to a grain scale for his powder charge, or a micrometer to measure his ball size or patch thickness, for that matter. Calibrated volumetric powder measures existed, as did adjustable measures, but again, I believe relatively few people had access to them. People came up with different methods of determining a starting point for developing a load. So many "thimbles full" might be one way, if you could borrow a thimble from your lady's sewing basket. Most of us have heard of putting a round ball in your palm and pouring powder on it until it is just covered, and one old-timer recommended measuring out seven moulds full of powder as a starting point. So, you come up with a volume of powder and try it out. Adjust the amount up or down until your rifle shoots the way you like, then make a dedicated powder charger that will enable you to throw that same volume for every load. You don't really need to know the exact amount in grains, as long as you can measure out the same volume consistently.

Interestingly, Lee Precision bypassed the grains weight versus grains volume issue by making a set of powder "scoops" that are calibrated by volume in cubic centimeters. Lee provides a chart with this set that shows grain equivalents for different powders, including different granulations of black powder.

So, the actual weight of the black powder that drops out of your volumetric measure is not really important. Equal volumes of different powders, and likely powders from different manufacturers, will give slightly different weights. We would hope that commercially made, adjustable volumetric powder measures would be consistent, from one to the next, and most black powder loading manuals base their recommendations on powder volumes in these measures, rather than actual weight. As oldwood said, blackpowder is forgiving.

oldwood said:
Did ya check it w/ a regular powder scale to see how accurate it is???
Click to expand...

... and just HOW does one check a measure (BP) based upon ‘volume’ against a scale based upon a ‘mass’? BP is based on volume, not weight ... you should know that ...

The physical weight of BP varies with moisture content, akin to why airplane/jet fuel is measured in pounds, the volume (gallons) varies with temperature.

There's only 2 classes of BP shooters I know who ‘may’ load using weight measurement as part of their accuracy load development, BP cartridge Schuetzen shooters and some No-So Skirmish shooters. They’ll get close to the ideal load using volume, then for consistent ‘pre-made’ cartridges or powdah containers, they’ll load them up for a match by grain weight; but only enough for that day or match.

Xactly! Black powder: use VOLUME; smokeless: use WEIGHT! When we say a # of grains of BP, it's just a way to talk about a certain VOLUME of BP. You don't have to know the weight, just the volume of your charge so it can be repeated.

I did some measurements of my volumetric measures about 20 years ago. I posted those results several times. As you can see in the table in the quote, some of the measures were pretty close. Most were close to the calculated weight. Differences between 3fg and 2fg were slight. My take away is to select a measure and only use the one measure for all load development.


Grenadier1758 said:
Some time ago I did a measurement survey of my volume measures to see What the differences were for these various measures. Oh, my gosh, it was 19 years ago.

I may have been pretty careful in my measurements as I held most of them to less than one grain standard deviation from the selected setting. (68% of my measurements were less than 1 grain.) The confidence interval means that I am 90% confident that the weight of the powder that I measured would be that many grains from the selected weight. The Large Swivel would pour up to 200 grains. In theory I thought I might have needed a lot of powder. In practice that just wasn't the case.

The major take aways from all these measurements is that when developing a load for accuracy, use only one measure. My 70 grain antler tip was pretty consistent. Tapping the measure to settle the load will provide a more consistent measurement, but less than 1/2 grain different than unsettled.

GOEX 2fg was a little lighter and closer to the predicted weight compared to volume.
Click to expand...

Actually it is measured volume equivalent of weight. Weighing is tedious and black powder is forgiving, so we get by with volume quite handily.
N

What's "powdah"? Is it an old Indian word?

I think our friend is writing phonetically to reflect his New England dialect. When he's driving, he probably "uses his blinkah" before making a turn.

He also might keep his drawrring's in a draw.

Notchy Bob said:
I think our friend is writing phonetically to reflect his New England dialect. When he's driving, he probably "uses his blinkah" before making a turn.

Well, I'm not making fun. I "greaze" my patches before shooting, carry my groceries home in a sack, and I've been known to "put some ahr in my tars" before driving the car on a long trip. I appreciate the fact that the OP embraces his dialect and is willing to share it with us.

Talk about diversity... If our country loses regional dialects, as I fear we may be doing, I don't think we'll ever recover them.

...and, as a side note, old-timers in my neck of the woods would call that device in the original post a "padder mayzure." I heard my dad say that many a time, when we were shooting muzzle loaders.

Notchy Bob said:
Well, I'm not making fun. I "greaze" my patches before shooting, carry my groceries home in a sack, and I've been known to "put some ahr in my tars" before driving the car on a long trip. I appreciate the fact that the OP embraces his dialect and is willing to share it with us.

Talk about diversity... If our country loses regional dialects, as I fear we may be doing, I don't think we'll ever recover them.

...and, as a side note, old-timers in my neck of the woods would call that device in the original post a "padder mayzure." I heard my dad say that many a time, when we were shooting muzzle loaders.

There you go
Making sense again

I have to take Highway Fahrty Fahr to go to the range.

I warsh my rifle to clean it.

"Powdah" an old Indian word? SURELY these days you mean "Native American" or some other PC term. In the UK "Indian" means something quite different ;-)

I used to spend about 12 weeks a year based in Taxachusetts (SOMEONE had to pay Teddy Kennedy's drink bills!) so got used to the twang. The REAL problems came when I needed to speak to the ATF (now called BATF&E) -- when I could hardly understand anything.
Local accents are a great tradition, until you get to speak to a professional yokel.
You must log in or register to reply here.
Share:
Facebook Twitter Reddit Pinterest Tumblr WhatsApp Email Link