My latest tomahawk for a friend.

Brokennock said:
If you see my post above and the reply from the o.p. you will note that this is a heavily (and beautifully done) modified/customized Cold Steel brand "Rifleman's 'Hawk."
The "bowl" is solid, more of a pipe bowl shaped hammer.
Click to expand...

Brokennock, Your almost right. It isn't Cold Steel's "Rifleman's Hawk". It is their "Pipe Hawk". The bowl is solid and it is actually a hammer pole hawk. The shape of the hammer pole is like a pipe bowl but is solid.

I do not modify these for throwing. There are better hawks designed for throwing. The ones I do are fully functional as a camp tool, as a formidable weapon for self-defense, or simply display. I have used mine to aid in the dressing of game I have taken and around camp and display. I am sort of a collector.
Last edited: Dec 6, 2021

Beautiful piece! I love the file work along the top.

Shiloh1944 said:
Your almost right. It isn't Cold Steel's "Rifleman's Hawk". It is their "Pipe Hawk"
Click to expand...

Yup, classic example of thinking one thing, but writing another.
I own one of those "pipe" hawks that I've removed the black coating from and made some other slight alterations to.
I'm thinking of removing the solid pipe bowl and creating just a flat rectangular poll that could still hammer shelter stakes and such, but, reduce weight and make it easier to make a sheath for.

Brokennock, my sheath's just cover the hawk bit. I also make a simple circular sleeve with a belt loop to slide the hawk haft through so it carries on the belt. 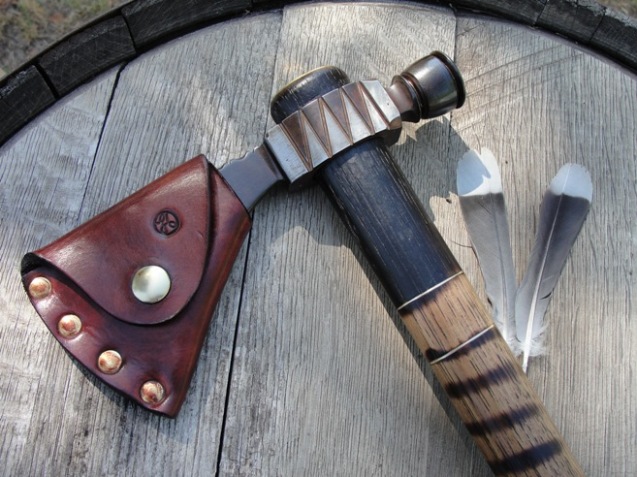 Rifleman1776 said:
Beautiful for carry. But an instant target for idiot 'handles' players.
Click to expand...

I don't know much about tomahawks. What does he mean?

Josephg said:
I don't know much about tomahawks. What does he mean?
Click to expand...

It is a nice looking tomahawk, that will look great on one's belt. Some people wouldn't even use a 'hawk that nice for splitting and chopping fire wood and shelter material,,,,, I would.
So "for carry," would mean for uses other than throwing in this case because. When throwing tomahawks at a target in a group, such as at a rendezvous, some people, "play handles" meaning they deliberately try to hit the handle of a tomahawk already stuck in the target,, and of course,,, because society now frowns upon beating the stuffing out of rude and inconsiderate people,,,, there are those who will deliberately focus there attention on hitting and damaging the handle of a really nice 'hawk such as this one.

Ah, I see, Thank you. Sounds like dog eat dog at one of them tomahawk throwin contests.
D

That may be about the finest looking 'hawk I've ever seen! Excellent!!

Shiloh1944 said:
Doubleduce 1, Here is one I did awhile back. It is a different file pattern than the one above however.

I like what you've done on the top edge, very similar to the Scots practise on Skean Dubhs and Dirks.
H

Sorry for the late reply but was out of town a few days. I used to do these and sell them but I haven't done one to sell in several years. I don't really want to get back into doing that as I prefer to do them at my leisure when the mood strikes. The ones I do now are usually for my personal collection. I may only do a few a year. Besides most folks are not willing to pay for the amount of labor that goes into doing one, anywhere from 25 to 35 or 40 man hours depending on the amount of file work involved and how fancy the haft is.
You must log in or register to reply here.
Share:
Facebook Twitter Reddit Pinterest Tumblr WhatsApp Email Link