We have records of whites, mostly French Canadians grabbing fusils, while ‘Americans’ reached for a rifle. Tucumshe traded off a NWG for a rifle.
Americans were making copies of the NWG and importing copies from Belgium, so fusils were avalible to white trappers.
Certainly men did lose guns at times and had to restock from what was available. Forts and post would have some NWG on hand, and no doubt brigades had a few in their supplies.
I hate to say this since I love ‘em smoothies, but I doubt an American trapper in the west during the MM period would have carried a fusil except in an emergency.
Double barrel shotguns were also sent west. In the absence of a rifle I think most would have turned to a shot gun before a NWG
3

Alaskan Woodsman said:
With regard to Mountain Man rifles, how did the smooth bore "trade gun" factor in to what MM themselves carried? Would a MM carry a NW trade gun? It is evident from Hanson's paper that Leman and other manufacturers made a number of "guns" for trade and supplying trading posts or rendezvous until they were discontinued. Many were FL guns and a lot of them probably due to being cheap were not necessarily used by MM but rather as gifts or trade for fur to those that lived there.
Click to expand...

32 ballard xl, along with your observation is the simple economics of how much money one had available to spend. Also, one can read trader's lists to get an idea of what they took to rendezvous or trading posts. Obviously some were traded with the locals, but also would be available to MM. All of these things would factor into what a MM used during the fur trade ere.
G

It has been reported that the hostile Indian tribes feared the Mountain Man and his rifle because of its extended range and accuracy. The trade guns of the times were no where near as accurate or far ranging. Also the natives were not consistent with their loads or the cleaning of the guns. The trade guns were alittle more forgiving when it came to care.

It should be noted that trade rifles were being sold to Indians by the US government factories by the late 1790s. After the government got out of the business contractors were making rifles for the fur companies.
Indians could get their hands on a rifle during the fur tradeMM period, but NWG would continue to be sold well into the reservation period.

Alaskan Woodsman said:
With regard to Mountain Man rifles, how did the smooth bore "trade gun" factor in to what MM themselves carried? Would a MM carry a NW trade gun? It is evident from Hanson's paper that Leman and other manufacturers made a number of "guns" for trade and supplying trading posts or rendezvous until they were discontinued. Many were FL guns and a lot of them probably due to being cheap were not necessarily used by MM but rather as gifts or trade for fur to those that lived there.
Click to expand...

This is an Alfred Jacob Miller painting, the only artist to visit a mountain man rendezvous. The large trigger guard on the long arm the mountain man is holding seems to indicate that it is a NW trade gun to me. 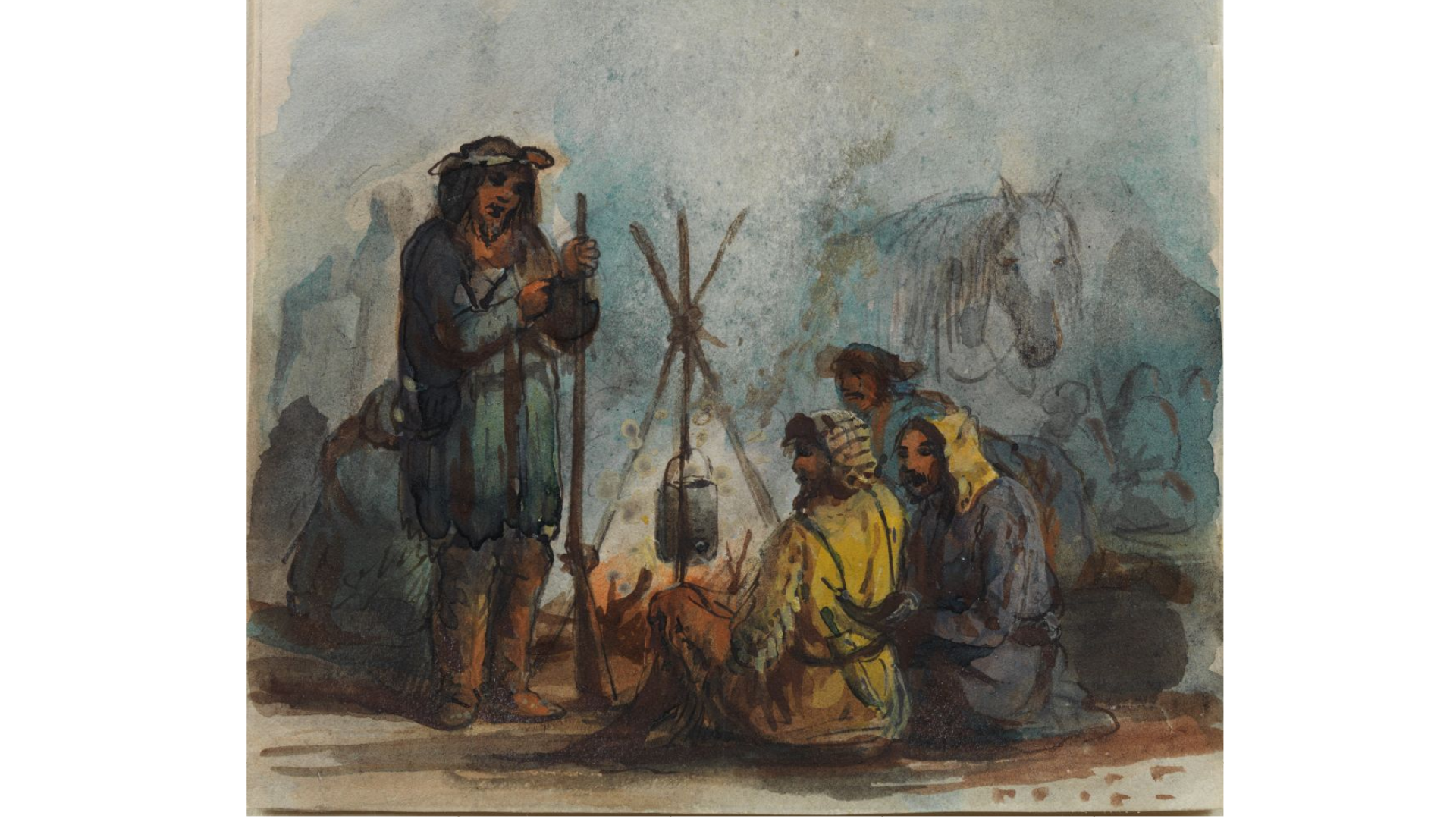 Some of Miller's other paintings show guns with straight butt like a trade gun. They may well have been pretty common among MM.
K

Also notice the belt knife in the belt of the man sitting on the ground.
P

While the painting is magnificent and the only pictorial record that we have, notice also that the man sitting has his powder horn thrown over his back. Perhaps to keep it away from the fire?

One thing we should remember is they weren’t ‘gun nuts’ back then. With few exceptions their gun was a hammer an axe. Only demanding such care as needed to keep it functional. Most Mountain Men worked an a brigade of trappers. Employed were some camp tenders,a scribe, and a hunter or two. The hunters may have loved their sweet lips, Bull thrower,Betsy, make me Come, etc. most would have guns for self and mutual defense.
Schoolcraft who was trampsing about the ozark at about the same time as western fur trade MM era. He didn’t seem to have much care for his rifle gun.
I think most were happy with with what ever they got.

tenngun said:
Schoolcraft who was trampsing about the ozark
Click to expand...

Which reminded me, at our local library right now (about 10-11 a.m.) there is a Schoolcraft reenactor speaking. I need to run over and see if he is still there. BTW, he recorded some very unflattering comments about Arkansans in his writings.

Pondering recent comments I'm thinking buck & ball would be some common "insurance" employed by the MM. Especially for a backup gun. Just a thought.
A

Really good evidence from those interesting paintings, thank you. I also agree that the TG would be a natural back up at less cost than another rifle gun or in addition to one of those too. On its own, in battle, it should be a real deterrent to enemies shooting arrows at you, within same likely distances. Be interesting to hear comments on that. The buck and ball idea would be quite a deterant.

burlesontom said:
Maybe they were like a lot of us and couldn't afford a top notch gun until later in life. That sure describes me. Now I can buy about any gun I want I just have to justify the expense to myself.

And I find the plains period interesting ever since I saw a movie on Netflix called Meeks Cutoff. I watched it three times and would watch it again if it were still on.

And even the movie Jeremiah Johnson is based after the 1841 Mexican/American War. And the MM never left the mountains in their hearts. They were Mountain Man for the rest of their lives. they just did other jobs to make ends meet. :thumbsup:
Click to expand...

Was this a movie called "Lost" or something like that? I saw one about the Meek Cutoff several years ago. It was one of the worst nonsense movies I've ever seen! I know because both my mothers' and my fathers' ancestors were on the wagon train guided by Steven Meek. I have my mothers' ancestors 40 caliber halfstock rifle that he carried on the trip. I have a couple of books about the trip. The latest is called "Wood, Water, & Grass" I can't give the authors name since I'm in another state right now. The book is an interesting and well documented account of the trip, which for the most part was pretty tough. The 40 caliber rifle is what got me going in the muzzle loader game back in the 70's. The bore was too bad to shoot accurately so I put together a .32 caliber copy which I still have.

Grimord said:
It has been reported that the hostile Indian tribes feared the Mountain Man and his rifle because of its extended range and accuracy. The trade guns of the times were no where near as accurate or far ranging. Also the natives were not consistent with their loads or the cleaning of the guns. The trade guns were alittle more forgiving when it came to care.
Click to expand...

Sorry franky4me, but I do not agree with all you said. Only the free trappers traveled in pairs or small groups. The company(ies) sent out brigades consisting of up to 40 or more trappers and camp tenders.
Many of the friendly tribes would not harass the trappers except to steal their horses if they could. Horse stealing was considered a coup for young warriors. The hostile tribes (Black foot, Arapaho, Apachee, Commanche, Pawnee, Arikari, Souix and others) would attack the trappers if the numbers were in their favor and they felt their "medicine" was strong. The hostile tribes also attacked their neighboring tribes when they could to obtain horses and plunder. The friendly tribes associated with the early trappers to trade and to obtain firearms in which to defend themselves from their hostile neighbors.

I'm not buying this either - it evokes the fantasy of Hollywood rather than reflecting what we know about history, the MM and their interactions with natives. Some natives were friendly while others were hostile and others were opportunistic.

What you say, though directionally correct, is an over simplification.

East of the Rocky Mountains, the fur trade did rely exclusively on trade between the Indians and European/American traders. And it was a mutually beneficial trade. The eastern Indians hunted and trapped the fur bearing animals and traded the skins to the traders for European goods. William Ashley (and actually Manuel Lisa some decades earlier) upset this business model by having the mountain men trap beaver directly and cut the Indians out of the trade. Some tribes were resentful. The Blackfeet in particular didn't want American trappers in their territory. The Blackfeet were also concerned that American traders were arming their enemies since they had a monopoly on arms trade with the Canadian companies, primarily HBC. Many mountain men lost their lives to the Blackfeet and a couple of significant battles were fought between the mountain men and the Blackfeet.

The Plains Indians were a warrior society. Even friendly tribes were known to steal horses from mountain men given the opportunity. This would often lead to confrontation. It wasn't just the Blackfeet that confronted the mountain men. A large group of Cheyenne and Sioux Indians attack a party of mountain men led by Henry Fraeb on the southern edge of the Medicine Bow mountains. Henry Fraeb and some other mountain men were killed during the desperate fighting.

Even though hostilities were generally avoided by both sides, Mountain and plains diplomacy was difficult because each tribe had other tribes that were mortal enemies. If mountain men befriended Crow, they could be setting themselves up for trouble with Sioux and Cheyenne who were enemies of the Crow.

I see a couple of us responded to the same post in very similar way while I was typing mine.
R

If one looks at what the fur trade companies were sending to rondy, realizing Indians were trading also, we can replace speculation and reason with actual data.

rich pierce said:
If one looks at what the fur trade companies were sending to rondy, realizing Indians were trading also, we can replace speculation and reason with actual data.
Click to expand...

That’s true, but they didn’t keep sales records. We don’t know what was sold to whom. How many trinkets were bought by Indians, how much by whites for trade or gifts to Indians. Some things like mirrors or beads could appeal to both. And a lot of white trappers working for the companies were infact eastern tribes mean and half breeds.
Smooth bore guns and rifles were traded while smoothrifles were offered and rejected.
Then guns were used rough, how many broke and had to be replaced by company stores, how many were pressed in to service in an emergency
The fight with the Gros Ventres at one of the ‘voos’ comes to mind. (37?) how many boys grabbed one or two extra guns to use in the fight?would they have one of each? I miss the don’t know emoji.