I have never seen a company get so many bad reviews. People don't make these things up. The word gets around pretty fast in our world.
Help out the new folks and spread the word about Scheisters!
Nit Wit

This month and last month (March and April) are probably the worst time to try and order something from MVTC. Several folks that I have met, will be going to the shop to hand pick out muskets for sale at Ft. Frederick Market Fair. Others I expect did so for Kalamazoo, which was last month.

The "trick" is to find a person who has the muskets for sale, and hand inspect them if they are the MVTC product. :wink:

Spudnut, as you have no bad experience with this vendor, don't give up on them. I purchased from "The Discriminating General" before, I'd gladly climb on the bandwagon in trashing them! BF

Yes DG or whatever that company calls itself today..., well I never discuss them as an option for a musket.

oh I wont give up on them,like I said my purchaces wernt too bad,if I ever do I' ll just ask him to pick out a good stock and I' ll do the rest

Great news!!! After more than 13 months, my Ketland Officers Fucil will arrive Friday. Just got UPS confirmation from Middlesex Village Trading. Also great news, My p1837 2-groove Brunswick rifle will be picked up tomorrow from a reliable black powder gunsmith nearby. Bought 2 parts guns from International Military Antiques some time ago, waited forever for The Rifle Shoppe to get parts to me, gave it all to this talented gunmaker last Sepember. Can't wait to see them both!! :grin: BF

Musket arrived today, sweet trigger and nice spark from the frizzen. Packed box in box with plenty of packing. Wood is Teak, figured that, it can also be remedied. Only thing that bothered me was the wait, but now that it's home with me, oh, well. Done and done, happy camper. :hatsoff: BF
H

I was referred to this post from my own Qs about quality of aid Co.s weapons. Thank you, and I am sorry you had to vicariously "take one for the team" so we cld all know what to expect.
I will as a result go back to DGW or TotW for my weapons concerns as a result.

Purchased three pistols from MVTC many years ago.
1. British Dragoon Pistol: The lock required serious surgery to get it working right. While at half-cock you could not close the frizzen all the way no matter how short of a flint was used. The geometry was way off. Had to have the tumbler shaft heated and twisted ever so slightly so the hammer would sit in the right position. Tough job. But worked fine after that. Then, to add a bit of overkill, sent the pistol to Mike Brooks to have the stock slimmed down and apply his antique finish.
2. Wheellock Pistol: Hard to believe, but the lock on this one worked fine from the begining, and still does. I felt lucky in that regard. I thought that if there ever was an Indian made lock that would end up needing a lot of work, this would be the one. Only think wrong was the arm on the sliding pan cover was too thin and would tend to bend, stick. Had a new one made and all was 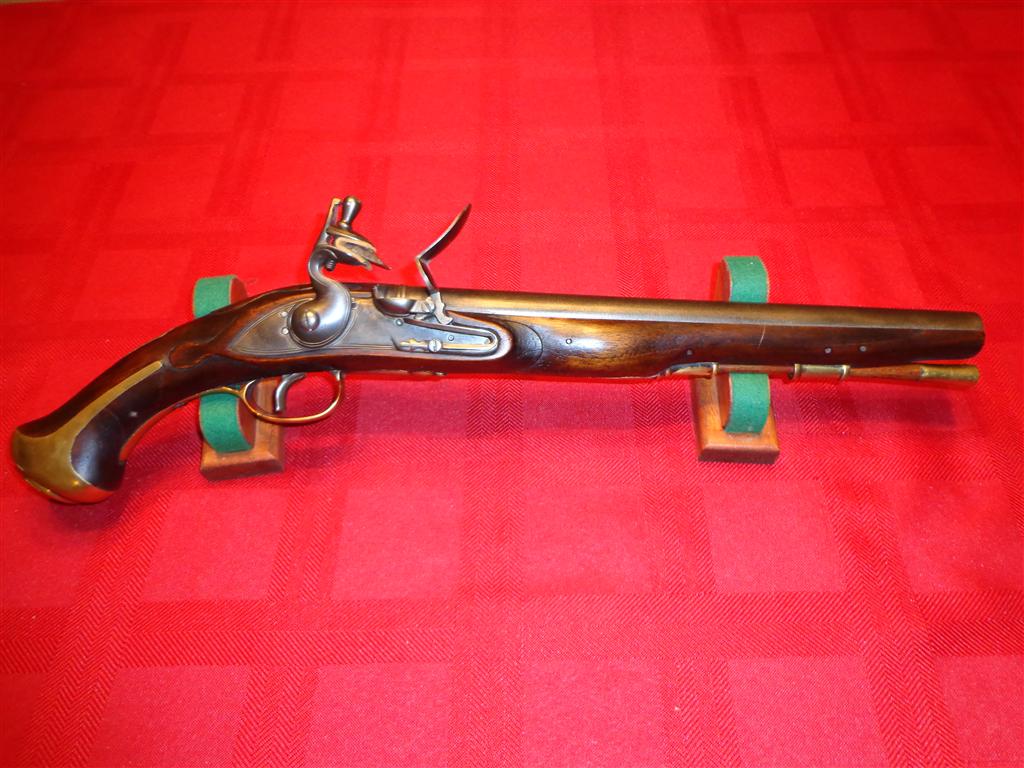 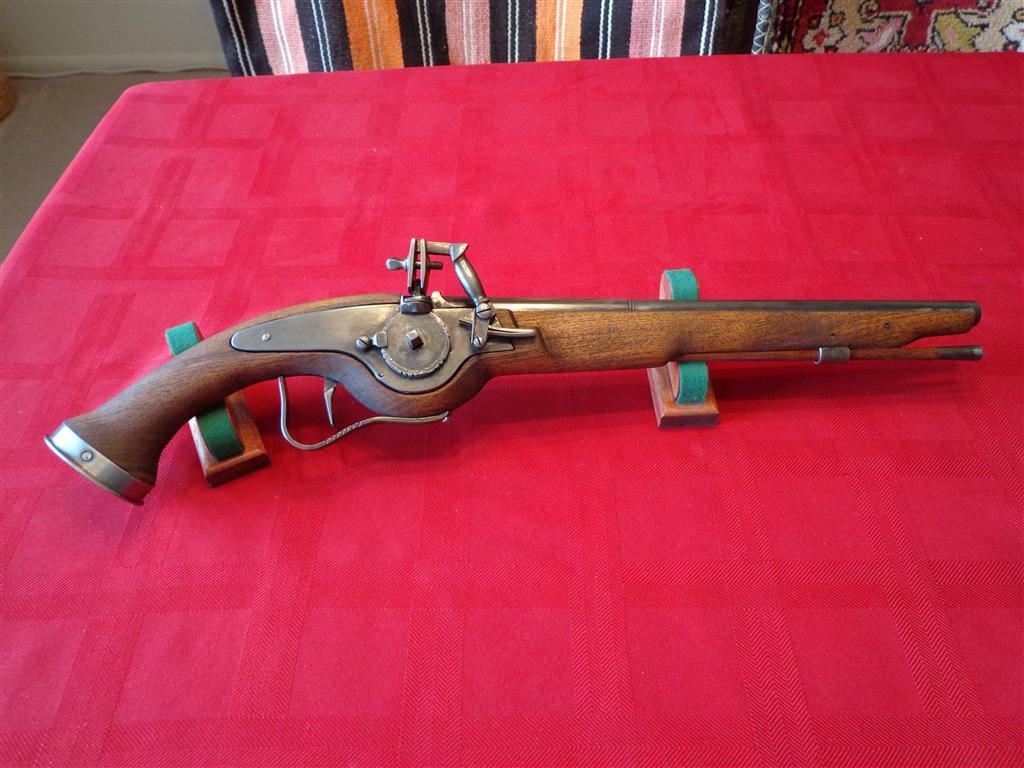 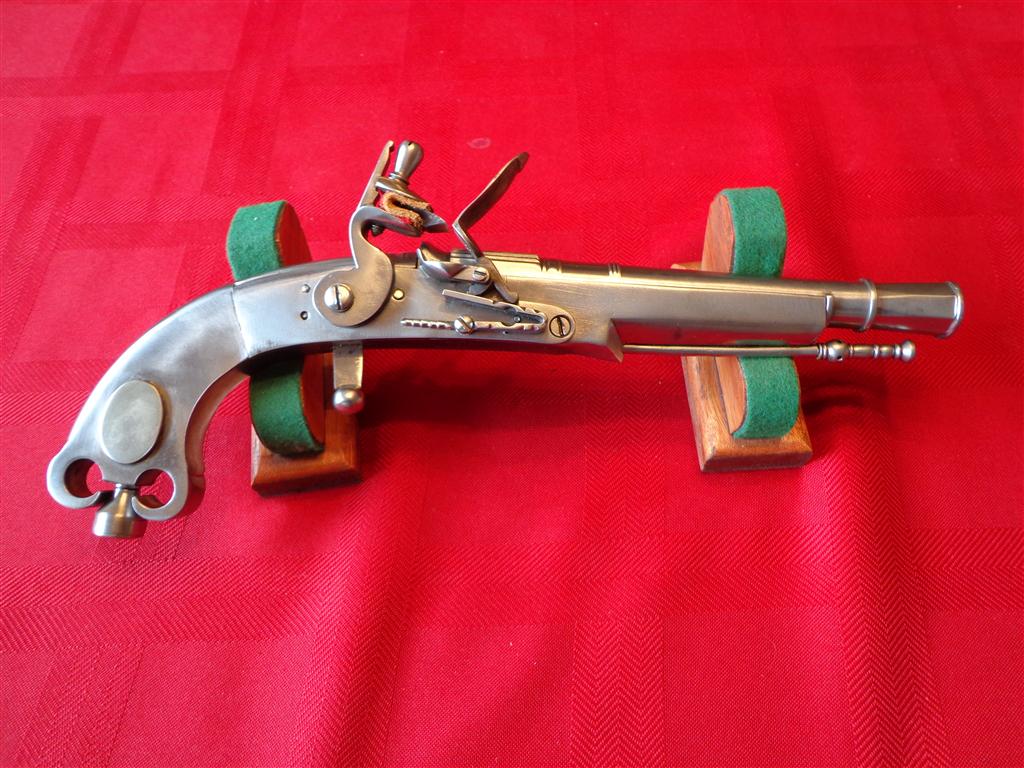 good. Had the gunsmith re-work the stock and replace the trigger and guard with more original looking pieces.
3. Murdock Pistol: The lock on this one had the same problem as the Dragoon pistol. Due to it's design it required quite a bit of work to get it right.

So it seems with enough due diligence these guns can be made into acceptable shooters. Someone once mentioned that he views these guns as somewhat kit-guns. That seems to be a fitting image. If you can't do all the re-working yourself, knowing a good combination black powder gunsmith/blacksmith helps a whole bunch LOL.
Rick

Been a while since I been here.
I have a musket from Loyalist. I bought it 10 plus years ago. It functions flawlessly with both blanks and live rounds. I have never had an issue. Is as good as my 1700.00 custom fowler. Heavier of course, but it do not gentle it as I do the other either.
SM
F

Ordered a 'in stock' firearm from MVTC in early Nov. Although I do understand that it takes MVTC time to tune and prep one of the firearms they get from India, I figured six to eight weeks should be enough. After all, it was shown as 'in stock' when I paid for it. My assumptions were completely wrong. After eight weeks, it became apparent to me that I would not receive the item within several years, if at all.

You can ask the owner of MVTC any question you want and he will refer you to his 'Terms and Conditions' that he will emphasized YOU SIGNED. When you read his Terms and Conditions you see 'most items are sent out within four to six weeks, but some take longer -- much longer.' He will refer you to his 'To Do' list as the only means he will use to communicate with you about the status of your order.

Before you even think about sending him your money, you better look at his 'To Do' list first. Note he does not date anything. Then understand that no matter what you ordered, you will be put on the end of his list. I was over 160 on his list when I made my order. He indicates that he is working on a firearm if he notes "Waiting for Prep". In the nine weeks I waited, I gained six spots on his list. All six were from guys who apparently cancelled their orders. He claims he tries to update his list (only means of communicating status with his customers) once a week but it may be longer, much longer. About every three or four weeks he will update his list and if you want to complain about his lack of communications, he openly says he will 'delete your e-mail with no response'.

In the nine weeks I was on his list, there was only one firearm he claims that he actually completed. Do the math. His own work list was showing was that I would be waiting about six or seven years before he got to my firearm, that was 'In Stock' when I paid for it.

I cancelled my order, with a snide comment from the owner of MVTC, and about the only thing I can say positive about it is that I wasn't charged the 20% cancellation fee. Not because it is illegal either. MVTC has the legal right to charge you that money if they want.

Maybe this guy was top of his game many years ago. Maybe he can turn a mediocre Indian made muzzle loader into a work of art. Not sure because in the nine weeks he had my money, he only completed one firearm for someone.

I was in contact with MIddlesex for a long land Brown Bess Until I saw some pictures of one and then an actual one at a reinactment in NJ. I’ve seen too many Indian made guns to know that I just don’t like them. The Locks are chunky, the Sprngs dont look right, the wood looks like table furntiure wood and the Brass parts are very chunky too. The barrel also seemed very heavy for a long land, its noticeably thick for a .75 gun making the weight around 11 lbs. Otherwise the owner was very nice.

I have watched this thread for quite some time and others discussing Middlesex Village. I have to add my 2 cents. Our Unit has purchased close to a dozen muskets from them and except for a few instances we have had NO issues. I think that unless you spend 1500.00 on a high end musket you should expect to have a few issues. We are very satisfied with what we have received. As to the wait......Our first purchases only took 3-4 months and now it takes longer. That could very easily mean more and more people want their product and that product may be a descent musket. Again, my 2 cents.
M

I am curious about the price. How much do they price the BB musket?
F

MGA said:
I am curious about the price. How much do they price the BB musket?
Click to expand...

NJLight said:
I have watched this thread for quite some time and others discussing Middlesex Village. I have to add my 2 cents. Our Unit has purchased close to a dozen muskets from them and except for a few instances we have had NO issues. I think that unless you spend 1500.00 on a high end musket you should expect to have a few issues. We are very satisfied with what we have received. As to the wait......Our first purchases only took 3-4 months and now it takes longer. That could very easily mean more and more people want their product and that product may be a descent musket. Again, my 2 cents.
Click to expand...

The long land at Middlesex is a good working musket. In regards to its overall presentation and workmanship I think its more worthwhile to get a better gun or purchase a kit and build one.

I returned an item to him a few years ago and never got a refund. Follow up emails were ignored. If you have had a good experience, good for you. As for me, I will never do business with him again!

I bought a Ketland Officers Fusil a few years back. I cdonsidered it as an assembled kit gun, needing a lot of woodwork to make it look acceptable. There was a problem with lock parts being too soft. The sear bent after onl;y 10 rounds fired. Return to Middlesex for repair & I got the same thing back - no hardened parts, so I did the work myself. I offered to harden his sear & tumblers, but was met with silence. Subsequent queries about other muskets want unanswered. I figger he was dead or out of the business, but stories of further purchases from him still dribble in from time to time.
S

I have a 3-band Enfield on layaway with him.....hopefully these are popular with re-enactors and he gets more than a few in at a time..
F

I'm not a huge fan of the Indian muskets. I've seen some that look very nice and others that look very bad, the overall quality is just not very high. I'm not a reinactor, I target shoot and hunt with mine, and I use mine quite a bitt. I don't think I'd get the miles from an Indian made musket.
You must log in or register to reply here.
Share:
Facebook Twitter Reddit Pinterest Tumblr WhatsApp Email Link