I am working on an early pattern Brown Bess and on a rifle for my blind friend, Josh. I am also starting a close copy of the Edward Marshall rifle but have to wait for delays in getting parts. While I wait, I thought I would build this pistol, which is a kit that was offered by the late Bill Kennedy. Bill was one of my mentors years ago and I jumped at the chance to make one of his kits, which are now very rare. I bought the kit from my friend, Dave Rase, out in Bremerton, Washington. Dave is a superb gun maker in his own right but he bought the kit years ago and never got to building it. The barrel was made by Bill and is 20 gauge, 8" long, and stamped with correct London proof marks and "WK" . I show it against a barrel from a long land Brown Bess. The precarved stock is English walnut and the hardware was cast by Bill in brass and is superb. The lock is Chambers small round-faced English lock, which is a very fine lock with a little work. It uses small Siler internals. I show it against an early Brown Bess lock for comparison. 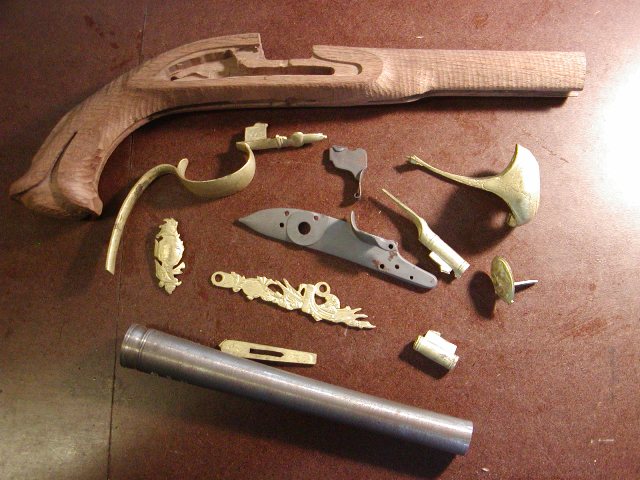 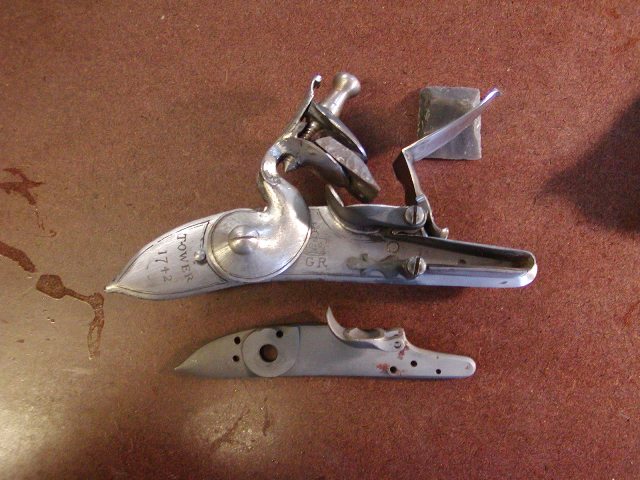 So for me, the first question is, what am I going to make? What will the pistol represent? Unlike many, I care a lot about historical consistency. So I had to figure out what I had to work with. The pistol is mostly consistent with moderate quality pistols from the era. For example, it has the classic British acorn trigger guard. That became popular during the 1770s but by then, high quality pistols would have flat-faced locks. The round-faced lock was relegated to military, livery, and trade guns by that time. If the trigger guard was of an earlier style such that the pistol could credibly be from the 1750s, I could create a high-end gun. As it is, it needs to represent a less expensive gun from the 1770s and a private purchase officer's side arm is the historical ticket. So that is what it will be. It will represent a modest quality pistol purchased by an officer without the wealth to buy a higher grade. So what does that mean? It means I build it as is, I include a little carving around the barrel tang, and the engraving will be effective but not highest quality. There won't be a hook and tang breech nor high-end ribbed ramrod pipes and silver wire inlay. It will have the facade of quality without the details. Now at that time, that meant a very well made gun compared to American colonial production but without the frills associated with first quality London production.

So here I go on another historical adventure. The first issue to resolve is the breech plug threads go really deep into the barrel. So deep, that there is no way I could position the lock in the precarved mortice to avoid the touch hole going right in to the breech plug. I did not want to move the barrel back because I want the fence of the lock to be correctly located at the end of the barrel. The solution was to hollow out the breech plug and notch it for the lock. It is really simple to do with drills and a drill press, and then grinders attached to a Dremel. It came out nicely and solves the problem. I will inlet the barrel tomorrow, so more is coming. 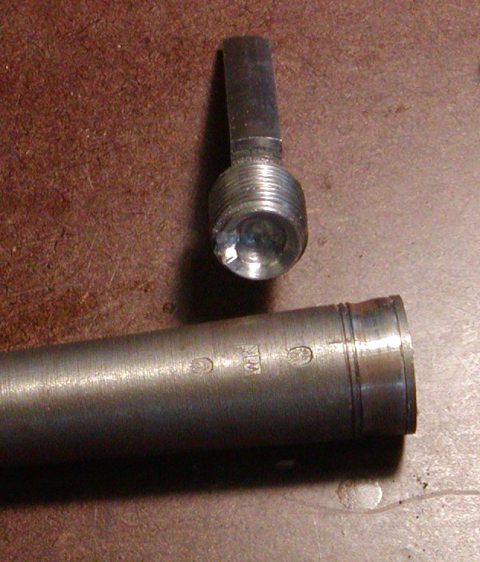 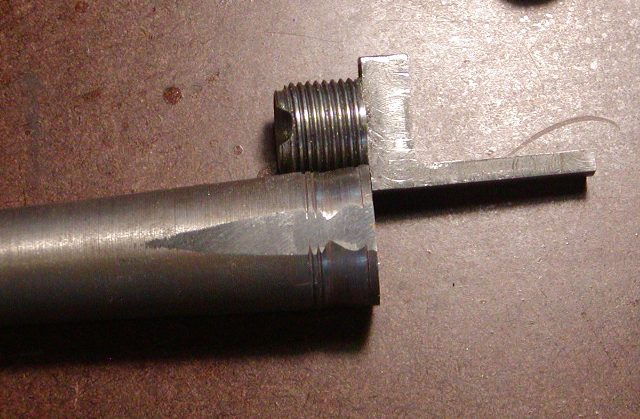 Warning, I will discuss and adhere to a great deal of historical detail. I realize that may be a "trigger" to some people. I inlet the barrel. First, the side at the breech that butts against the lock has to be flattened. I filed it flat until the facet was level with the bottom of the mortice for the lock plate bolster machine inlet in the stock. It took quite a bit of filing. In the photos below you will see the pattern the flat makes on the barrel. On originals, the flat is a simple rectangle because it is filed in the barrel before the breech molding was filed. This modern barrel was turned on a lathe and the breech molding turned as well. When the side is filed flat, it produces that "vase" like pattern. Judicious filing will change that pattern to look more authentic. The barrel inletting was easy. Corners in the breech area were rounded from the machine cutter and needed to be squared up. 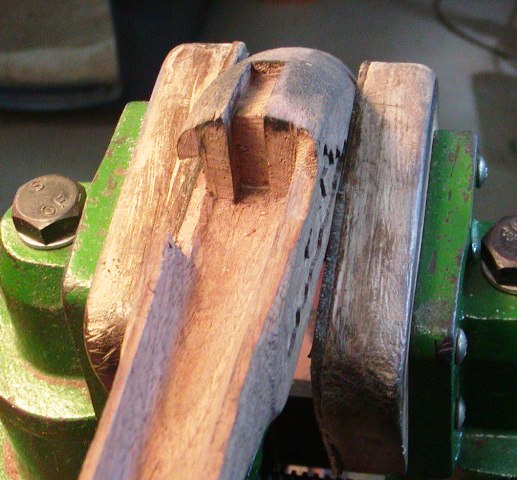 The rest of the barrel channel was slightly undersized and using inletting black, a round barrel float, and round scraper, I set the barrel in nicely and easily. I installed the breech plug and shortened the tang by about 1/8". It is a simple squared tang similar to those found on these kinds of pistols. Once the plug bolster was set in, I could lower the tang down to the wood surface and trace it. The inletting was easy. 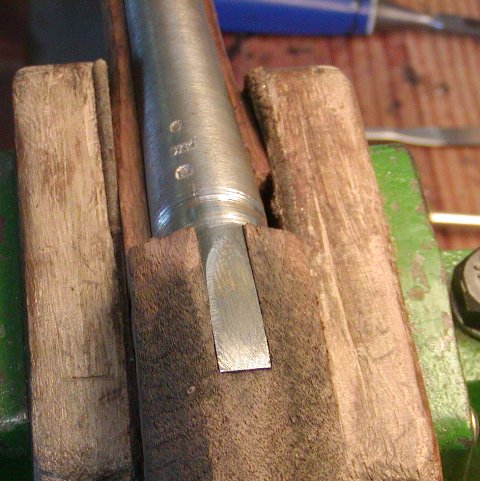 I decided to inlet the lock plate. I filed draft on the edges of the plate and positioned it in the undersized mortice. I really wish kit makers would offer their kits without the lock inletting. It is actually easier to position, trace, and inlet a lock from scratch than trying to fit it to these machine cut mortices. You end up having to scrape wood off the edges, which is a precarious task that risks chips and tears. Anyway, after a little fussing, the plate went in nicely. On these pistols with round-faced locks, those flats around the lock will be so thin that they almost disappear. The pans on these pistols were usually located low below the centerline of the barrel. The kit has the correct positioning. The vent hole will be below center as well, which is what is most often the case when you examine originals. It is difficult to achieve the right historic stock architecture at the lock panels if the lock is not positioned low. The last photo shows what a handsome pistol this should be. 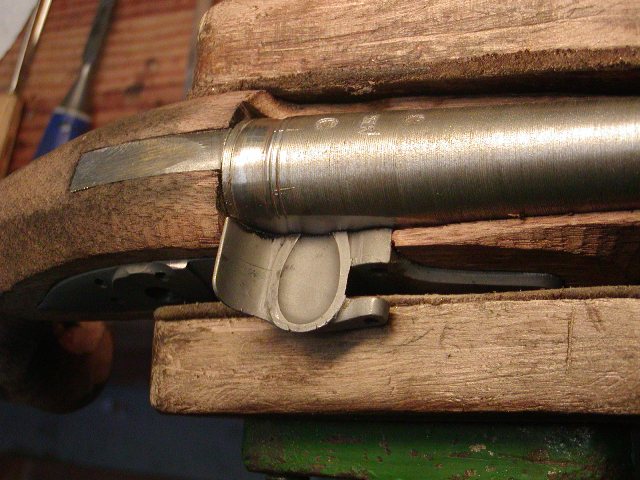 For such a small post you have taught me a lot.
Thank you.

Hi and thanks for looking and commenting. Pistols were almost always sold in pairs during the 18th and early 19th centuries. I've looked at British pistols posted on many auction sites and it is humorous how often pairs of pistols are labeled as "officer's" or "dueling" pistols. Civilians bought lots of pairs of pistols for personal use not just for military or dueling purposes. Privately purchased pistols for officers often looked just like civilian horse pistols with no clear way to tell they were for an officer. They tended to have standard military bores (0.65 caliber or 0.56 caliber) Many appear to have had inlays and engraving with martial motifs, which can be an indication that the owner was a soldier, but by no means always. Many documented officer's pistols were lighter, more ornate versions of military issue pistols. In the case of my pistol, there is no detail that absolutely identifies it as an officer's just that suggestion because of the martial side plate and thumb escutcheon, and the round-faced lock, which is similar to locks on ordinance issued pistols at the time. Many pistols labeled as dueling pistols may have been used in duels but are not real dueling pistols. By the late 1770s, the British dueling pistol had well defined characteristics (with some exceptions as always). Full swamped octagon barrel, front and rear sights, plain stock, hair or set trigger, best quality lock, and perfect craftsmanship. So, I call this pistol an officer's pistol but in truth it could be any modest quality pistol purchased during 1760-1770 by a civilian for personal use or use by one of their servants (livery pistol).

Thank you for posting along with great info and photos, as always. I always appreciate the efforts you take to attend to historic details.
D

Looking forward to seeing this project come to fruition as I always do with your posts. Thank you for sharing your skill and knowledge with us here, it is always an informative treat!
H

Looking good Dave....learning a lot as you go, so much appreciated.
S

Looking forward to this build as i am building a companion pistol to my Kibler colonial. A Rice 58 cal swamped barrel is the beginning. I purchased a trigger and guard . The stock will be full length but i am not sure of the shape yet. It will be in curly maple. My concern is the stocks integrity due to expected recoil
B

Dave, thanks for posting this build. I will follow along with much interest.

dave_person said:
For me, the first question is, what am I going to make? What will the pistol represent?

It needs to represent a less expensive gun from the 1770s and a private purchase officer's side arm is the historical ticket. So that is what it will be. It will represent a modest quality pistol purchased by an officer without the wealth to buy a higher grade. So what does that mean? It will have the façade of quality without the details.
Click to expand...

Your Q&A is a perfect starting place. And I can see the future "handsome pistol" of your last photo.
Thanks for taking us along for this build.
~wiksmo
R

As always, an interesting and informative post. Your posts contain
a wealth of information not only on how to do the nuts and bolts of the build but are full of historical background on the technical aspects of the build and how to make it correctly. Thanks Dave.
You must log in or register to reply here.
Share:
Facebook Twitter Reddit Pinterest Tumblr WhatsApp Email Link