I'm curious...what game animals (or None Game) have you harvested with Black Powder?

What Muzzleloader (Type, Calibre, Manufacturer, etc) is your favorite to take hunting out in the field?

Hunting yarns are my favorites...Tell us a story...

Lots of stories on here, so I won’t repeat, but so far I’ve harvested Whitetail and Mule deer, Moose, Elk, Black Bear, Ruffle and Spruce Grouse. Waterfowl are next on the list.
All have been taken with either .50 or .54 round ball, or .50 370gr Maxi Ball.
Walk

Squirrels and my favorite...the mighty rabbit.

Location
The birthplace of Texas

Whitetail, turkey, squirrel, rabbit, incidental coyote. All but one of my front stuffers are builds vs commercial. .54 cal is my favorite for deer. My smooth rifle with shot or my .36 SMR for small game. All flinters but one now.

Here's one of my best stories from the past...

A month ago I posted about my first doe with a flintlock. The hunt continued for a mature buck. Unfortunately, the chest cold I had been enduring got much worse and I had to abandon the rest of the first gun season. I had to move on to the late Minnesota Muzzleloader season which brings us...
www.muzzleloadingforum.com
Last edited: Feb 18, 2021

Just to mix things up.

I will be going deer hunting next season and want to hunt small game as well, but haven't taken any game with a BP gun yet. I did, however, shoot a butterfly as it flew by at about 15 feet with my Walker.

I didn't think I hit it until I found part of his wing on the ground. Hopefully my next kill will be a bit more impressive...

On the road between San Antonio, NM and Carrizozo, NM me and my pop saw a wild Oryx. That’s my Moby Dick.

With my 20 gage trade gun (my go to gun) I have taken bear, deer, turkey, duck, quail, chukar, squirrel, rabbit, and woodchuck.

Started shooting muzzleloaders in 1974 when friend at work asked if he could site his Hawken .50 in on my shooting range at the farm I leased. He came out one day and after watching him shoot and loading/ shooting about 20 rounds, I couldn't wipe the smile from my face. Went that week and purchased a TC Hawken .50 with all of the extras at a place called TG&Y department store in Oklahoma City. I told the guy at the counter I needed everything to shoot it. They had roundball, black powder, patching from TC, cleaning jags, ball puller and caps.
I stated that fall shooting my first muzzleloader deer and it was on. I even carried it in modern gun season so I was getting two whitetail deer a year with it, some squirrels, a couple of rabbits, armadillos and after buying a Sharon .54 drop in barrel with 1-60 twist I took a cow elk with roundball in SW Colorado after drawing a hunt there. With my flintlock I have taken deer, one pig, one elk, squirrels and even took it with me on a prairie dog hunt and shot a couple of pasture poodles at close range with it. I used a .72 cal English Snaphaunce Musket I helped build from a kit from the Rifle Shop in Oklahoma and took a small buck with it before it was sold. It is the one in the photo of the "Rifle Shoppe" catalog under Snaphaunce Muskiet weapons.
I have taken two deer with blackpowder pistols. One with a CVA Mountain pistol at about 15 yards and one with my Ruger Old Army, conical and 30 grn of 777.
It is a hoot. I want to take some game with my double barrel shotgun I built but I'm just getting it to pattern after a lot of powder and shot.
L

In 1959 at age 8 I was sitting next to my Dad in a tree stand and clutching the ,45 cal. percussion rifle he had made me when a little buck walked up. I managed to put the ball where it needed to go and had my first deer. Excited? Just a little. Over the years that deer was followed by others as well as squirrels and rabbits, a hog, plus one chicken killing dog. Most were taken with a ,45 cal rifle although I did own a .50 cal for a while. I discovered smoothbores some years back and that helped increase my score on rabbits and squirrels plus adding a few doves and quail to the list. I'm currently waiting for the ice and snow to melt here in Texas so I can go try out the new 20 ga smoothie I bought from Paul Simmons up in Colorado.
John

It’s always fun too challenge a good buck in his territory!

Taking the hunt too them is really a challenge.

We were hunting on a Friends Dads property.
The property 600 acres, was surrounded by a few small farms and a newly developed subdivision containing only two houses at the end of a dead end road.

During our 1st pre-season scouting trip , we we bumped deer just as we entered the wood line..

My Friend suggested that we rake a trail into our stand locations ..so on the second trip in that’s exactly what we did,,

We raked two separate trails approximately 150- 200 yards each, from the parking area into our stand location in the adjoining hardwoods.

Now we could slip into our stands quietly in the morning darkness , within 2 weeks rubs appeared along the raked pathway..

So far with black powder I’ve only hunted squirrels and whitetails.. 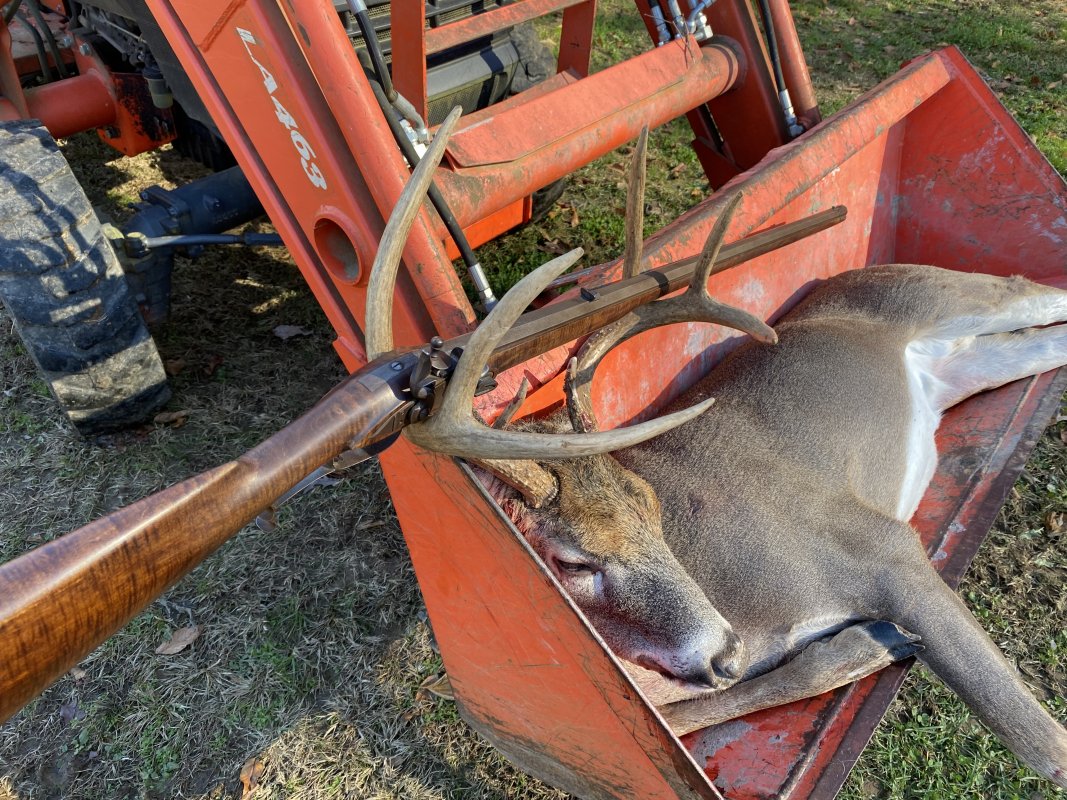 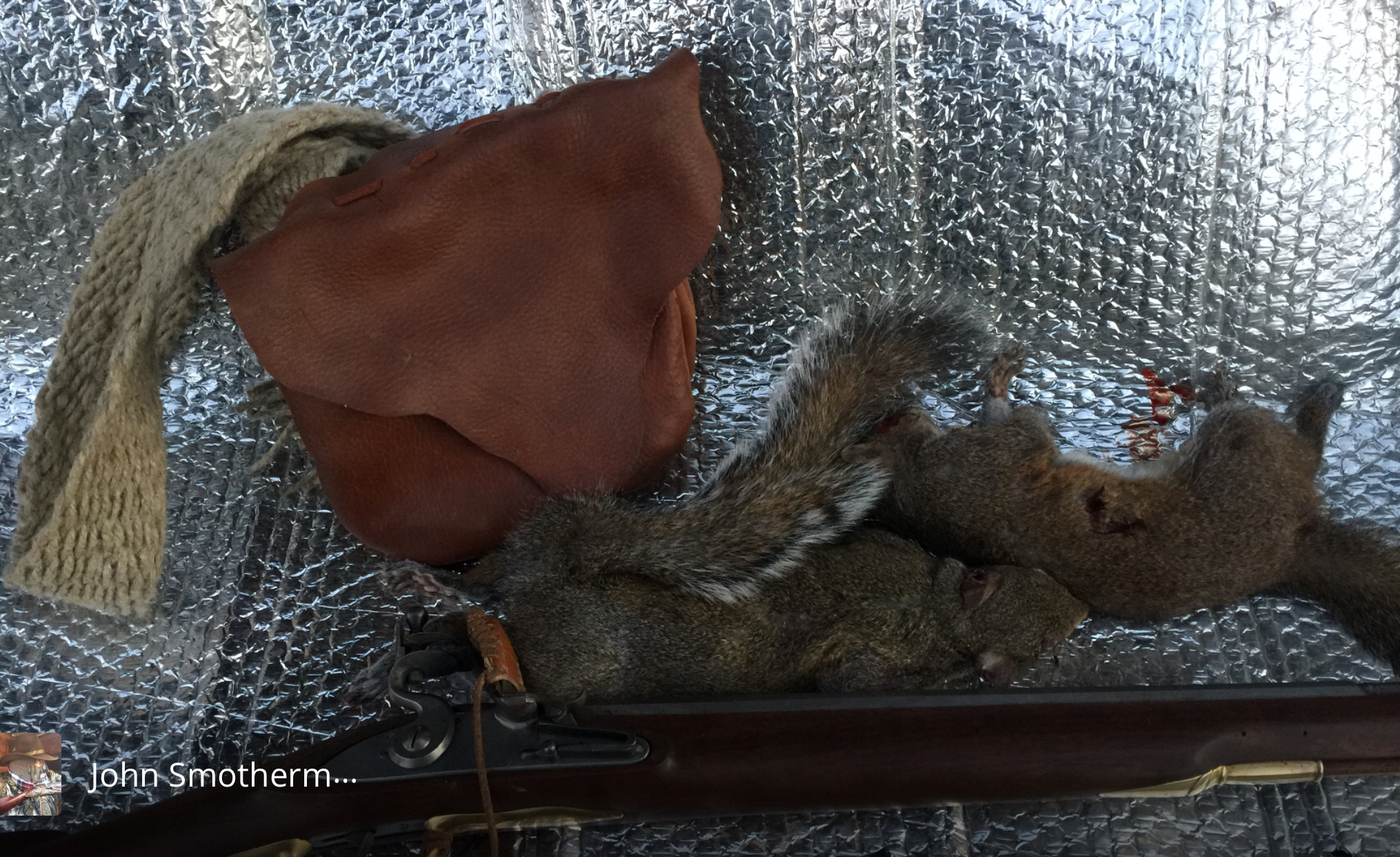 What Muzzleloader (Type, Calibre, Manufacturer, etc) is your favorite to take hunting out in the field?

Hunting yarns are my favorites...Tell us a story...