Mainer, oldtimer [82] huntin fishin fool.Lookin to learn something about clothing,firearms I will be carrying during french and indian war period.

Great grandfather was a col. in the British army during F.& I war, then sided with British in American Rev.,got shipped off to Canada after. I'm not very computer savvy!

Welcome to the forum from Texas!

Welcome back to the “colonies!”

you are sure to find some great info here.

Welcome from Maine
Google the ancient ones of maine
Nit wit

Another Welcome from Texas!
I lived in Rockaway NJ back in the '70s. Lots of history in the NE US.
Lots of good info here for the asking.
We'll even help you post emojis!

Welcome from Winchester, VA!
B

Welcome to the Forum. Tons of good information here. The F&I War has its own subsection which should be helpful. (And it's nice not to be the oldest in the room. Doesn't seem to happen much these days.) 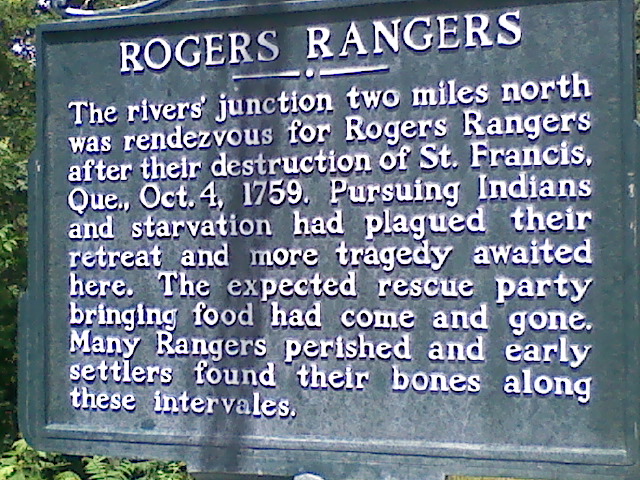 Maine woodsman said:
Great grandfather was a col. in the British army during F.& I war, then sided with British in American Rev.,got shipped off to Canada after. I'm not very computer savvy!
Click to expand...

I have an ancestor who fought in the F&IW and settled in the Canadian maritimes. He had to flee to America when he later wouldn't swear allegiance to the Crown.

I see you're in Pearl River. I'm from up by Poughkeepsie, but my parents were Mainers (I just moved to Maine last year.)
K

Welcome, spent 3 years at Dow AFB in Bangor back in the 60's, great hunting!
T

Maine woodsman said:
Great grandfather was a col. in the British army during F.& I war, then sided with British in American Rev.,got shipped off to Canada after. I'm not very computer savvy!
Click to expand...

Welcome to the forum from Washington State (formerly of Vermont and then Virginia).

If he was in the British Army during the F&I war then he would probably have a Long Land Pattern Musket, the one with the wooden ramrod instead of the metal one and the long barrel (46") known as the 1722 Pattern musket. The 1756 Pattern had the steel rammers but still had the 46" long barrel and its possible he may have used that if they were given new arms to his unit 2-years into the war. The newly arriving troops from England usually arrived with the newest arms, so depends on when he joined up.

The loyalist regiments usually had the oldest arms. So if he came from England in 1756, he may have had the Long Pattern 1756 Musket with the steel rammer. The 1769 Pattern had the steel rammer with a 4" shorter barrel (42")but that wasn't released until after the end of the F&I war (ended 1763). If he was in the British army during the Revolutionary War, he would probably have the 1769 short land pattern musket.

Here is a shot of the 1756 Land pattern musket. It still has the 46" barrel. The most identifiable difference between this musket and the 1722 Land Pattern Musket is the wooden ramrod on the 1722 pattern and the steel rammer on the 1756 Pattern.

The 1769 Land Pattern musket looked like the 1756 but had a barrel 4" shorter at 42" instead of 46" and the overall length was 4" shorter too. The 1769 musket was designed in 1768 and approved by the king with contracts issued for manufacture. It was actually supplied to the troops in 1769 so you sometimes see this listed as 1768 pattern.

If he was in the British Army, then he would have worn the Madder Red British Regimental Coat with white breeches and small clothes. If he was a loyalist as opposed to a British Army infantryman, he would probably just be wearing civilian clothes although some of the loyalist units also had regimental uniforms that were different than the red of the British Line Troops. I remember that some loyalist units used Green Regimental Coats. Unfortunately, I don't know enough about them to help you out with that but there are other British Army Reenactors here on the forum who can help with with uniform clothing. It is quite a bit more involved that standard civilian clothing.

It's pretty cool to be able to trace your family back to the F&I war and the Revolutionary War. My Mother's maiden name is Akers and her family came to the US in the early 1600's by way of Holland. They were some of the earliest settlers in Virginia. Five of my "Akers" relatives fought in the Rev War and at least one, John Akers (my Great Great, Great, Great, Grandfather) fought at Yorktown under Capt. John Caldwell. Come to find out he had a cabin along the Black River south of Boones Mill in Franklin County, Virginia. I lived in Boones Mill area for 10-years about 8-miles away and fly-fished on the Black River when I lived there. Wish I'd known about it then, I would have been looking for his cabin's site. I'm 71 and I just found that out 2-years ago when my son was tracing back our family on both sides through Ancestry and it led to Nottinghamshire, England for the Akers. It's surprising how much documentation from the Rev War is available out there. Below is a copy of his Pension claim. 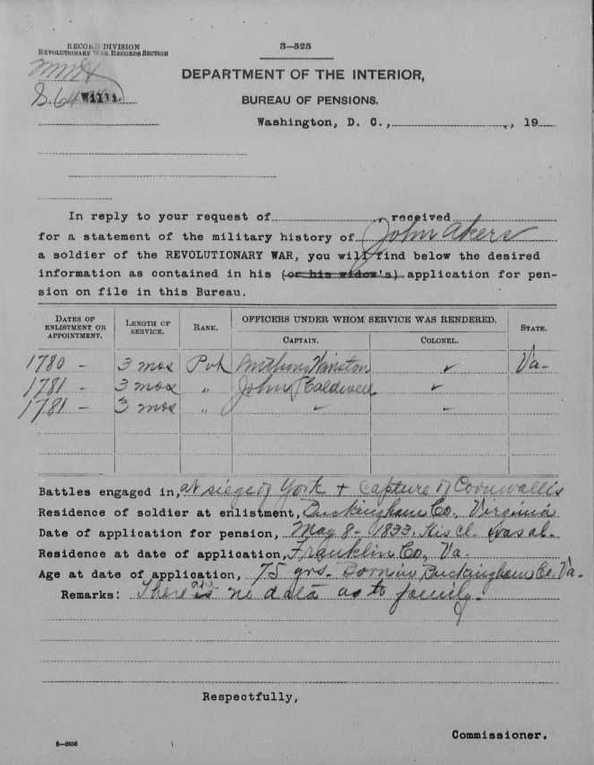 At 82 I'm just beginning to learn about my ancestors during the French and Indian war and the American revolution
It all started with a dvd called Turn ,about spy's for George Washington on Iong Island ,NY.
I saw this movie and it kept mentioning a Richard Hewlett who was a thorn in the side of the rebels. A little fact checking and sure enough he was one of my ancestors.
Your family history sounds very interesting and thank you for welcoming me and telling me about your history.
I will try to learn all this new info you have given me about clothes and firearms . I have joined a group here in Maine that
does rondevous and flintlock shooting so am really enjoying this also. They call themselves "The ancient ones"
Thanks again and keep your powder dry. Best,Herb
O

Howdy and Welcome from Texas!