This is local to me. I belive this was found in tbe Charton river area in Missouri but I will do more research and find out the factual location. This is displayed in Macon County Mo.
I have taken several photos of it.
It could be native American made but I lean more to
possably made by the French
who were in this area. My father as a kid found a simular dug out in Randolph County Mo in the 1940's in the bank of a creek there..I believe this is 18 feet long or there abouts. A very interesting item. Your opinions are welcomed.

Very interesting! I look forward to hearing the results of your research.

It's a reminder of just how tough people were in those days. Lots of work with hand tools & maybe fire to make it, and that thing must've weighed a bunch even when it was hollowed out! Dragging it up a bank... dang. Hard work.

Very interesting. There is one on display, maybe at LSU (going by an untrustworthy memory) made of cyprus said to be able to carry about 40 natives. The work and dedication to make things like this is unthinkable now.
Can't picture modern people stopping a journey to cut and hollow out a huge tree.

I agree it is time consuming making one.

I am sure it was valuble property. Some of them are found submerged in lakes weighted down with stones to hide them when not in use.

Townsend does a video on making a dugout. No small task

If they can get an accurate estimate of its age, maybe that will help with identifying who made it, based on who was occupying the area at the time. On the other hand, it may have been made somewhere else, and poled or paddled into the location where it was found. It would be good to know the type of wood it was made from, also.

There was an interesting find in my area back in 2000. Newnan's Lake, in Alachua County, Florida, was named for an 1812-era Georgia partisan named Dan Newnan, who engaged in an epic battle with the Alachua Seminole people near that lake. It is noteworthy that Florida was Spanish territory then, and Newnan really had no business being there. In addition, the battle resulted in a stalemate, but Col. Newnan was commemorated anyway by naming the lake after him. However, the Seminoles already had a name for it... they called it Pithlachocco, meaning "place of many canoes," or something to that effect. Nobody paid much attention to that.

Time went by, until a severe drought in 2000 lowered the water level, and people started finding old dugout canoes in the mud around Newnan's Lake, over one hundred of them. They have been intensively studied, and radiocarbon dating has shown some of the oldest date to 5,000 years ago, with others between 500 and 1300 years before the present. Lab analysis also shows most of them were made of pine, although at least one was cypress.

Canoes (and wooden boats, made by the settlers) were often sunk intentionally. This may have been for concealment, but there might be other reasons. If you think about it, people are pulling logs that were cut 200 years ago out of lakes and rivers, and the wood is still in good condition. On the other hand, wood that dries out can shrink and crack. Years ago, an older fellow was telling me about boats he had built out of cypress planks, and he advised me that if I ever built one, I should just "leave it under water" until I was ready to use it. Otherwise, the wood would shrink and warp and the boat would leak.

I've never built a dugout canoe, although a buddy of mine did, about 45 or so years ago. It took a lot of work, but it turned out well, and he said the really surprising thing about it was that it was very stable in the water. Dugout canoes must have been useful and practical for the folks who were willing to build them. Granville Stuart, best known as a Montana pioneer, grew up in Iowa. In his book, Forty Years On the Frontier, he described a dugout canoe his father built: 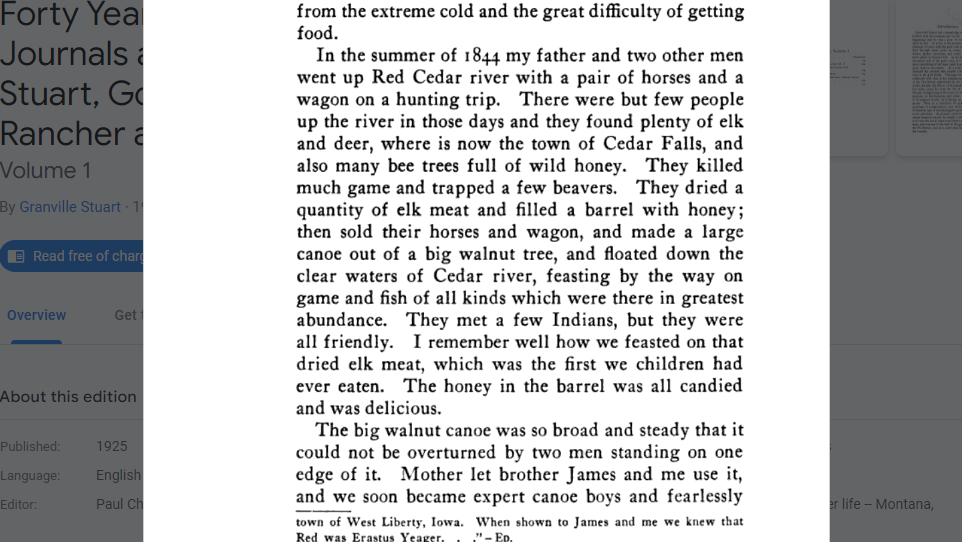 Note the comment, "...it could not be overturned by two men standing on one edge of it." That must have been a big canoe.

Anyway, I hope we hear some more about the Charton River canoe. It is an important artifact, regardless of who made it.

I think it is a excellent research project. Check my fb page out. "The Mudlark mess" I posted some of my previous research and I posted a artical on "dug outs" a few months ago. I read about all the dug outs found in Florida in the drought. So many found. That was awesome.

I'm local to Newnan's Lake as well, came to post this. Cool related trivia - Tom Petty's dad worked at the Tackle Box, a bait-n-tackle place not too far from the lake

Some Notes on the Black Hawk War

North central Ohio reanacting of the the early 19th century