I have a question for you flintlock rifle shooters. What is your favorite large bore rifle caliber and why? I talking 50 and bigger.

I have two .54 caliber flintlocks that I shoot a lot in various competitions. The .54 is nice when it's windy.
R

I recently finished a .62 jaeger I am having fun with... I have taken to calling it "Thumper". I have used a .54 a lot hunting. It's a good compromise between bullet weight and useable range, but I am going to try the .62 this year.
T

.54 here as well. Everybody I know has a .45 or .50. I wanted something different. Plus, I wanted a little heavier ball for deer hunting. A good hit from the .54 and the deer goes down fast.

I am with Art Caputo. I love the .58 for its accuracy and knock down power. I shoot a .54 Jaeger often, but my go to deer hunting gun is a Renegade flintlock with a Bobby Hoyt re-bored barrel in .58 with a 1:66 twist.

I’ve been hunting with a .58 for a number of years now. This single rifle has harvested more deer than the rest of my armory combined. None gave me any trouble following blood trails for recovery. Only one made it 50 yards from the location it was shot. I would guess it slid at least half of that distance down a really steep bank. BJH
R

So that .62 caliber flint longrifle was just a fantasy rifle. But, it shot extremely well.

Weighing in at approximately 8.5 pounds, recoil with a 0.615" diameter × 348 grain pure lead ball over a 75 grain charge of fffg black powder was very tolerable. I never considered recoil in the shooting equation for the short amount of time that I owned that rifle. I regret not having had the time to ever hunt with that rifle.

Been leaning towards a .62 caliber, Early American pattern barrel from Colerain, which measures 38" long. The gain twist in the 38" long barrel starts out as approximately 1 turn in 76.5" at the breech, quickening to 1 turn in 36" at the muzzle.

Been thinking about a contemporary, halfstock, flintlock, English Sporting Rifle using such a barrel.
D

For years I have shot .54 in my percussion Lyman GPR. Primarily a hunter, I wanted the extra mass of the bigger round ball. .58 wasnt very popular, and components were tougher to come by locally.
This year I got a 2nd .54 in the new Pedersoli GPR in a flinter to make the ammo compatible, and hopefully shoot the same load. It is nice that both shoot my cast .530 balls better than the store bought Hornadys.
I am building a Kibler Colonial in .58 now. I went that caliber primarily to lighten up the long beast, but am very eager to see how it shoots.
To round things out, I recently got a near steal deal on a t/c renegade in .50 cal. I have to work on the triggers and improve on the rear sight before I will get serious with sighting that in.
Now, I am really thinking down the road about a .40 cal. southern mountain rifle for mainly range shooting....

In the last few years, mostly a 54 with a round ball.
I am going to be trying to tune up a Lee REAL 58 cal 440gr to use in my Pedersoli Safari double rifle for an upcoming big bore hunt.
The 54 is a known and proven killer of pigs and deer. Never had to chase one down for a second shot.

I finished a Kibler Colonial in 58(GM straight cut bbl) about a year ago. Probably the most accurate, and the best balanced muzzleloader I own weighing in at 8.5 pounds. Eight consecutive shots from the bench at 25yards(2), 50 yards(3), and 100 yards(3). No swabbing. 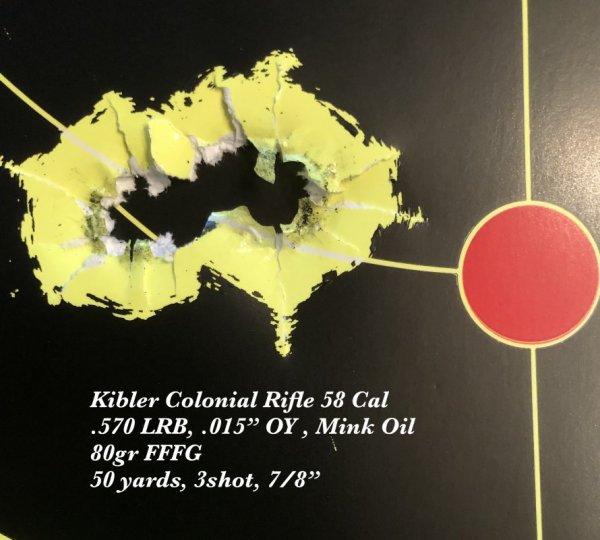 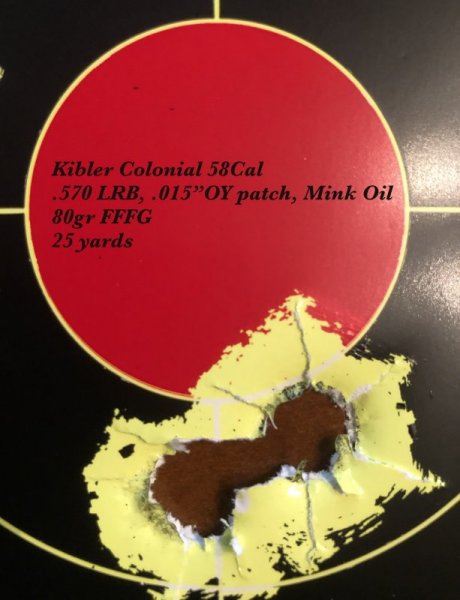 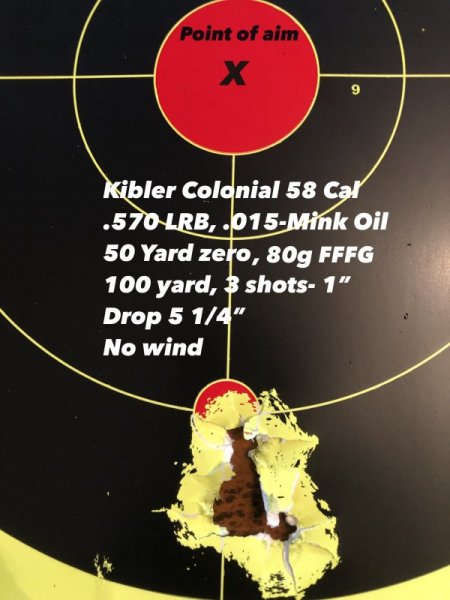 I am having a lot of fun with my 4 bore lately. But it is only fun for a little while. Three or four shots is plenty for the day.
M

Banjoman said:
I have a question for you flintlock rifle shooters. What is your favorite large bore rifle caliber and why? I talking 50 and bigger.

My cousin had a 4 bore flinter from Dixie that he loved. Boy would that gun hold a lot of shot. I think I remember it being a smooth bore. The muzzle hole looked like the end of a drain pipe attached to a stock it was so brawd.

.54, works very well for what I need it to do and like the old timers, I can squeeze out and also carry a few more balls to the pound.
A

.62, big ball, big hole, lots of blood, you do your part deer DRT- seconds on the .54 the C.V.A. mountain rifle is the most accurate rifle in the stable.

For all around hunting, can't beat a 54. Big enough for round ball with elk and moose, but light enough recoil for target, deer, and bear.
M

I would never consider 50 or 54 caliber a large bore. I consider 63+ cal to be large bore. 45 to 62 is medium size. I have no idea what my favorite large bore rifle would be. I don't see much point in a large bore rifle. That's smoothbore territory.
You must log in or register to reply here.
Share:
Facebook Twitter Reddit Pinterest Tumblr WhatsApp Email Link