Kentucky militia in war of 1812

I recently visited the Raisin River Battle site. I admit that the war of 1812 is not my strong suit, and assumed that this battle was fought by U.S. army regulars. Found out that the vast majority were militia from Kentucky. The same for several battles in northwest Ohio.
My question is, what style of rifle would have been carried by these volunteers? The museum at Raisin River shows a Tennessee style "poor boy" as typical. I highly doubt this. Mel Hankla's excellent book "Into the Bluegrass" shows a bunch of gunmakers in Lexington by this time. I'm assuming that a few of these brass mounted rifles found their way north with their owners. Is there any documentation of these guns in the mentioned battles?

There were Kentucky rifle makers. And makers from Tennessee moved north. Pennsylvania and Ohio were making guns and sending them west. Connecticut had a good sized gun industry at this time, Maryland and Virginia were all making guns.
Largely any American rifle would be found in Kentucky.
Of cours smoothies were seen, and a used rifle going back to the Revolution would be just an old rifle.
T

You may find some useful information here and I am inclined to believe that many of the rifles were the ones the men already had and used on a daily basis. I have a family history book that mentions one of my ancestors who lived in NC at the time and joined up with a group of soldiers/volunteers that was passing by his home on the way to fight. In the story, all it says is he grabbed his rifle from the mantle and told his wife he was going with them. It also states he drew rations while he was with them. Weapons in the War of 1812 | NCpedia
T

I found another source that has some helpful information. The War of 1812 Website
Last edited: Oct 31, 2022
T

Thanks for the leads.
T

Thagomizer said:
Thanks for the leads.
Click to expand...

The Uniform Militia Acts of 1792 and 1793 (2 different acts) were some of the first legislation passed by the new Congress created by the U.S. Constitution. It required every able body man to report for duty with a suitable rifle or musket, I think 100 rounds of ammunition, and necessary accoutrements had to be carried as well. In short, everyone showed up with whatever guns they personally owned. Most just wore their own clothes. Other than that, not really any specifics, so any type firearm could have been carried by militia forces. Most states also had stands of muskets and how those got distributed and to whom, I'm not sure. I think there were some all volunteer units (such as artillery) that had more appropriate gear. Often these all volunteer units consisted of wealthier people who could afford uniforms, etc.
The University of Florida (I'm a Floridian) published an excellent book on the History of the American militia. The internet usually has a few second hand copies, well worth reading.
U

That every citizen, so enrolled and notified, shall, within six months thereafter, provide himself with a good musket or firelock, a sufficient bayonet and belt, two spare flints, and a knapsack, a pouch, with a box therein, to contain not less than twenty four cartridges, suited to the bore of his musket or firelock, each cartridge to contain a proper quantity of powder and ball; or with a good rifle, knapsack, shot-pouch, and powder-horn, twenty balls suited to the bore of his rifle, and a quarter of a pound of powder; and shall appear so armed, accoutred and provided, when called out to exercise or into service, except, that when called out on company days to exercise only, he may appear without a knapsack. That the commissioned Officers shall severally be armed with a sword or hanger, and espontoon; and that from and after five years from the passing of this Act, all muskets from arming the militia as is herein required, shall be of bores sufficient for balls of the eighteenth part of a pound; and every citizen so enrolled, and providing himself with the arms, ammunition and accoutrements, required as aforesaid, shall hold the same exempted from all suits, distresses, executions or sales, for debt or for the payment of taxes.
Click to expand...

The Militia Act of 1808 also provided for the federal government to produce/purchase arms for the various states.
R

Thanks for the post. I didn't know it was only 20 balls required. For anyone interested, in time more and more people showed up for training without any firearm. They had to pay a small fine but the fine was less than the trouble of buying a firearm. To overcome this problem some members asked to form elite units, properly armed, etc. During the war of 1812 most militia units refused to pursue the British into Canada. The "high water" mark of the militia was the American Revolution. By the time the War with Mexico took place it was obvious that the militia wasn't a very good means of defending America. Some folks think the militia was sort of a state army to counteract the newly formed Federal Government under the Constitution but we really didn't have much of an army at all. The militia was "the army". In any event in 1903 an act was passed creating a National Guard consisting of volunteers. They would be supplied by the state with arms and uniforms. Everyone else got dumped into an inactive militia with no more requirement to train, etc.

Thanks for the post and information. I’ve been researching my great x3 grandfather, who was in the Kentucky State Militia. He served during the War of 1812 and the battle of the Thames.

I have zero flintlock experience but pondering on my first being something similar to what he may have had.

Not a lot of Americans know about the battle of the Thames. It’s a shame, it was a great victory for the yanks and
W.H. Harrison. It had a direct impact where I live in Brantford, Ontario on the Grand River right beside the Six Nations Reserve. American General Duncan McArthur was determined to raid deep into the Ontario peninsula after the victory at Moravian Town on the Thames. His planned march along the Detroit Path to Burlington brought American troops up along the Thames River and right into County of Brant. This march was one of devastation, since McArthur had ordered his mounted Kentucky and Ohio riflemen to massacre, burn and destroy in order to demoralize the people living in the area. It is thought that his plan was to attack the British at Burlington Heights and then head south to help American troops at Fort Erie. In early November 1814, at Oxford Upon the Thames, there was a small skirmish near the present-day Centreville. Although McArthur had stated that he wouldn’t cause any more damage if there was no further resistance, two Oxford residents, George Nichol and Jacob Wood, left to warn the troops in Burford that McArthur was on his way. In retaliation, the homes of these two men were burned and their livestock killed. In addition, the Burdick Mill was burned to the ground. It was the only flour mill in the area. Knowing that McArthur was heading to Burlington and that the shortest route was to cross the Grand River, Upper Canada militia leaders determined that their small force of about 150 men would be no match for the Americans. They decided to march to Malcolm’s Mills, now Oakland, to join with the Norfolk Militia. Meanwhile, a large contingent of militia, foot soldiers and Haudenosaunee warriors were waiting for McArthur’s men at D’Aubigny Creek and Brant’s Ford. Since the west side of the river was rather swampy and the Grand River was swollen, the result of recent rains, the Americans were severely handicapped. In addition, a flat-bottomed boat that usually provided ferry service had been conveniently sunk by the men of Brantford. Three things influenced McArthur’s next decision. He had received word that the American army was evacuating Fort Erie, the river was too swollen and the current too swift to attempt a crossing and the militia and natives on the other side were determined to not let the Americans across the river. Instead, the Americans withdrew and camped overnight in a drier and more suitable area and then headed south along the Mount Pleasant Trail. When they reached Mount Pleasant, Perrin’s Mill was burned, as was the local store. The troops stole household items, cattle and horses to supplement their own supplies. As well, the homes of known militiamen were burned to the ground. As in other locations, this caused several years of hardship, since the settlers faced food shortages. Their homes and the mill had to be rebuilt. On Nov. 6, 1814, when McArthur and his force of riflemen arrived at Malcolm’s Mills (now Oakland), they found that the road was barricaded and a bridge that went across the creek was damaged. However, they managed to move across a dam of logs and driftwood on foot and were able to attack the waiting militiamen from the rear. The 400 Upper Canadians were not only outnumbered, but also very poorly equipped. The American forces overwhelmed them. The following day, McArthur burned both the sawmill and the grist mill operated by the Malcolm family, as well as Gates’ Mill down the Grand River. At Sovereign’s Mills, now Waterford, all mills were burned, as well as several others in the vicinity of Port Dover, including Dover Mills. Following along the north shore of Lake Erie, McArthur again reached Detroit on Nov. 17, 1814. Often said to be the last battle fought on Canadian soil against a foreign enemy, the Battle of Malcolm’s Mills basically ended the conflict in Upper Canada.
Last edited: Jan 22, 2023 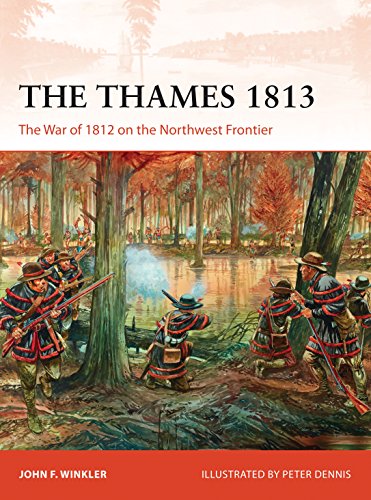 TScottW99 said:
Thanks for the post and information. I’ve been researching my great x3 grandfather, who was in the Kentucky State Militia. He served during the War of 1812 and the battle of the Thames.

I have zero flintlock experience but pondering on my first being something similar to what he may have had.
Click to expand...

My 5th Great Grandfather also served at the Battle of the Thames.

kyle_kalasnik said:
My 5th Great Grandfather also served at the Battle of the Thames.

Mine was Lieutenant-General Christopher Riffe, sixth regiment of the Kentucky militia. He’s on my mom’s side of the family.