Welcome back everyone, Summer is upon us (or soon to be) in most of the country and with it comes everyone's favorite insect! This months contest will be an attempt for us to thin out the June Bug population just a bit!. This Target is based on the NMLRA june bug target, originally intended to be shot at 35yds so moving in to 25yds should be a piece o cake right?

This is a 8 shot target. Fire 2 shots at each bull, misses count!

The shooting distance for this contest is 25 yards.

No do-over’s. Print and shoot one target only. One rifle and one pistol is acceptable.
Only registered forum members may participate.

If you would like please take a picture of your target and post it on the forum under this months (May) shoot to share with other members.

Patched round ball only. No restrictions on caliber. (a patchless ball may be used if so desired)

Fire 8 shots only, misses count! Mutilated targets or targets with more than 8 holes will be disqualified. If you have any questions, suggestions or concerns please don't hesitate to contact me.

Option 1 (preferred):
Mail your target, postmarked no later than June 30th to:

Option 2:
Scan or photograph your target and email it no later than 11:59pm June 30th to:

As long as I can CLEARLY make the target out I'll accept it. ** Not having the original in hand, If I cannot easily determine which ring the majority of the hole lies within the lower number will be scored**

Reminds me of shootin' at grasshoppers when I was a youngin'.

Crooked Creek said:
Reminds me of shootin' at grasshoppers when I was a youngin'.
Click to expand...

Yeah! And flys at a baited board with air rifles.

I'm liking this target. Hopefully have a chance to shoot it.

Will shoot mine next week.
S

This is going to be fun!
J

Myself, GaryPL and friends shot this target today. I am finally starting to get the Austin & Halleck Mountain rifle used to me and me used to it. At least these were all on the paper this time.

Bottom pic shows shot numbers. Yep, #6 is off the paper.
Boy, I thought I had the New Englander figured out! I believe I am getting closer, though.
Rough bore near the breech tore the patches.
I might post my target, and a description on how shooting it went, in the general forum so I can get some feedback on it.

It was fun, though! 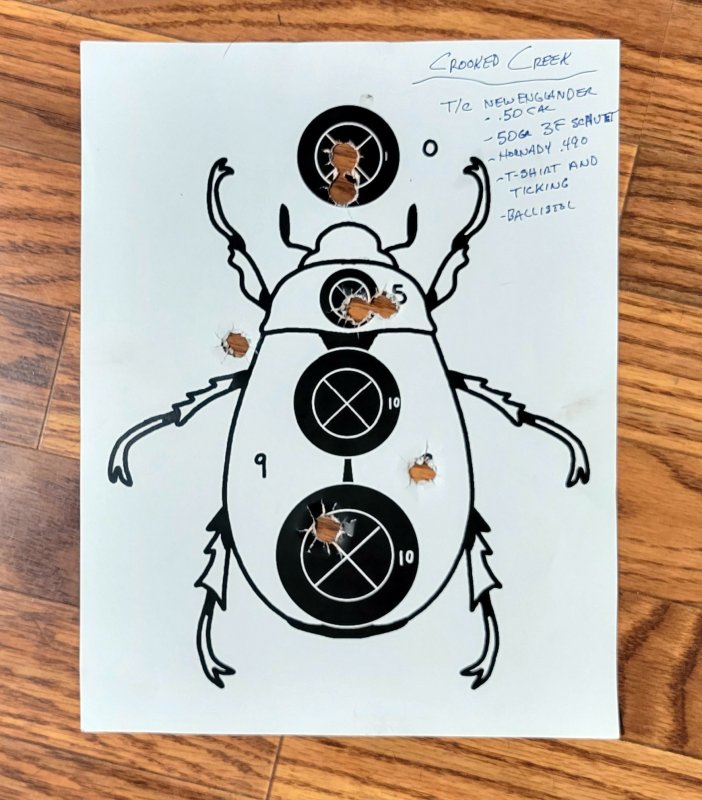 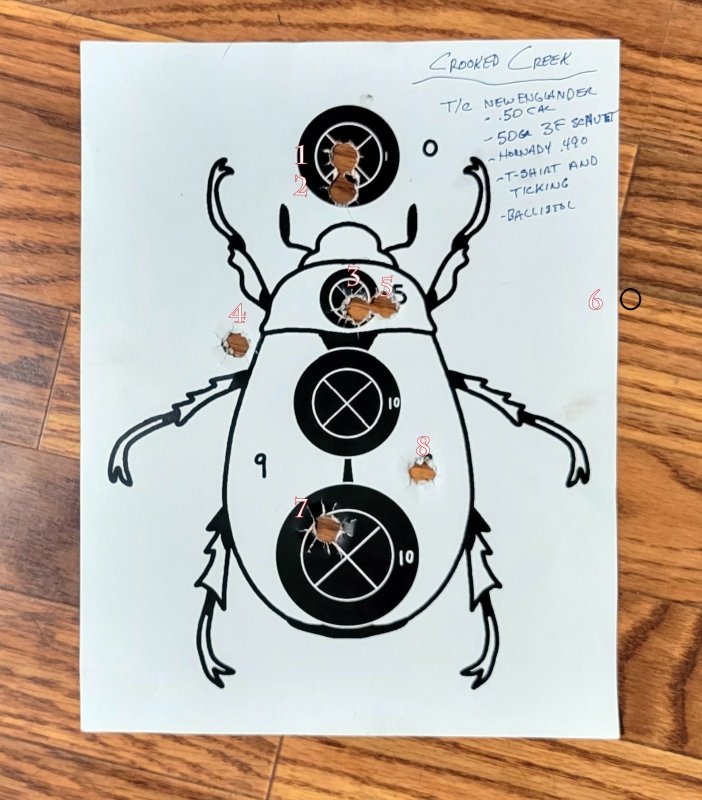 That’s a nice target! Why do you put t shirt material under the patch?

garypl said:
That’s a nice target! Why do you put t shirt material under the patch?
Click to expand...

I was using t-shirt material, then I changed over to ticking.

Crooked Creek said:
I was using t-shirt material, then I changed over to ticking.
Click to expand...

That makes more sense! I think T shirts in general are too thin and loosely woven to work well as patches, but whatever works!

printed the bug and will shoot it today. set up the target, got distracted with honey do's and then this guy blocked me. there is a mineral lick they come in to use. guess i need to change my shooting range! 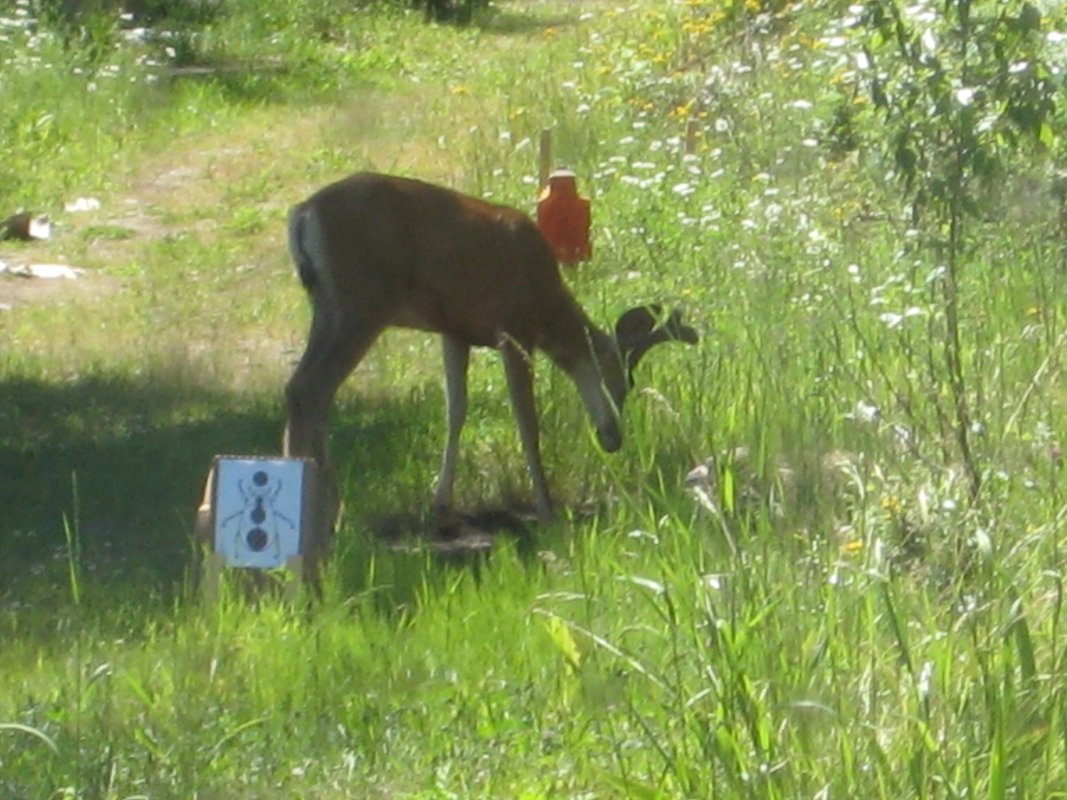 neighbor left and i got it shot. the more i shoot the worse i get! 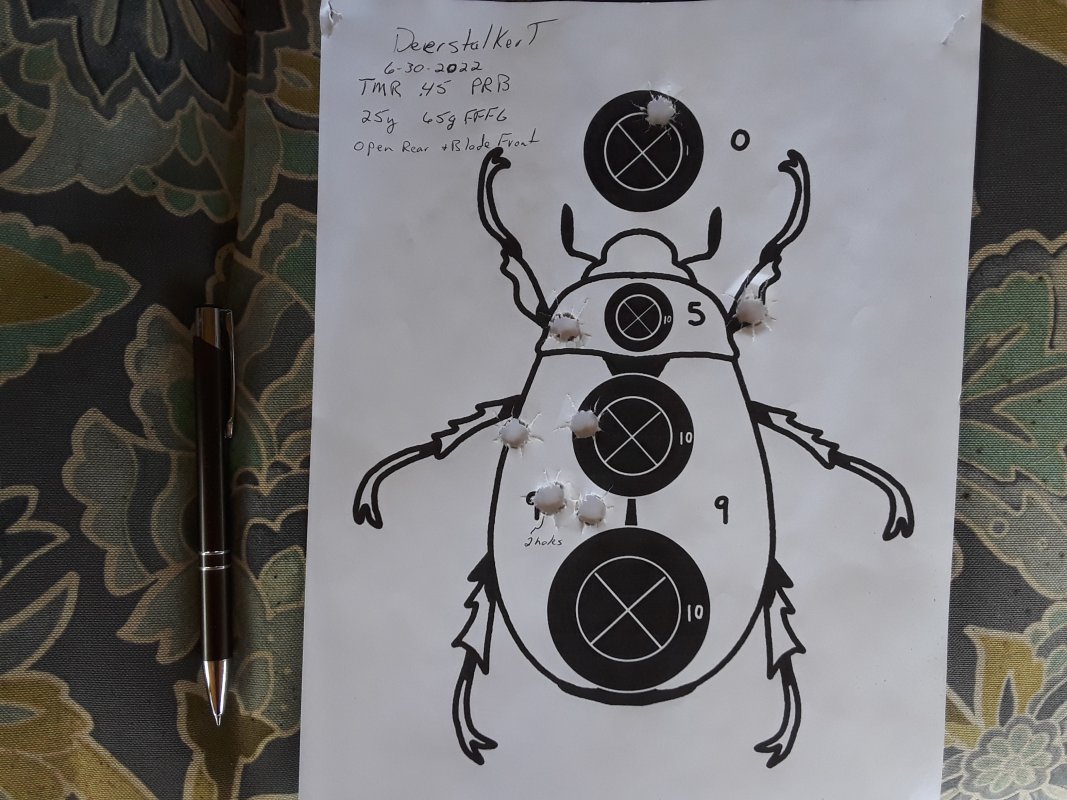 I'm out this month. I took my 1861 springfield replica musket to the range a couple of weeks ago with what I thought were the proper sized roundballs. They would not go down the tube. So I ended up shooting unmentionable projectiles at the target.

So what are we going to do in July? Self score? Who has a target they can post for us to copy and shoot?