I found material for knife handles and more in that pile.

Dutch7 said:
I was there today with my wife and she had a great time learning about the machines. I was able to pick Jim’s brain on wood selection and how he sources. He has a good setup, tons of raw materials and several employees.
I’d expect his wait time to improve and the woods runner is a looker! I was not sure about gun from the description but the one on the table was tasteful and not over done as a woodsman’s rifle should be.
Click to expand...

Here are some more of the Woodsrunner rifle Jim ,
made. These are some details and carving pictures. His additions to the cheek rest carving seems to balance and complete it better than my memory of the original.

Bnewberry said:
I found material for knife handles and more in that pile.
Click to expand...

I’m sure there was some outstanding wood in that pile for knife scales. Too bad for me I don’t live closer.
you’ll have to share some pics when your done.

Wish I could have been there. My Garman GPS says it's 787 miles. There's no way I could afford a12 hr. drive with gas prices being such as they are. Boy, could I stand a mean tweet or two right now!
Last edited: Jun 25, 2022

Bnewberry said:
They were making a stock for one in the CNC when I was on the tour but no photos. They had a stock on the table with a version Jim did previously.
Click to expand... I was at the Kibler open house also. Here is the "unseen" sideplate .

TraderVic said:
If anyone does stop in, some pics would be nice here on the forum. Maybe another time for me.
Click to expand... 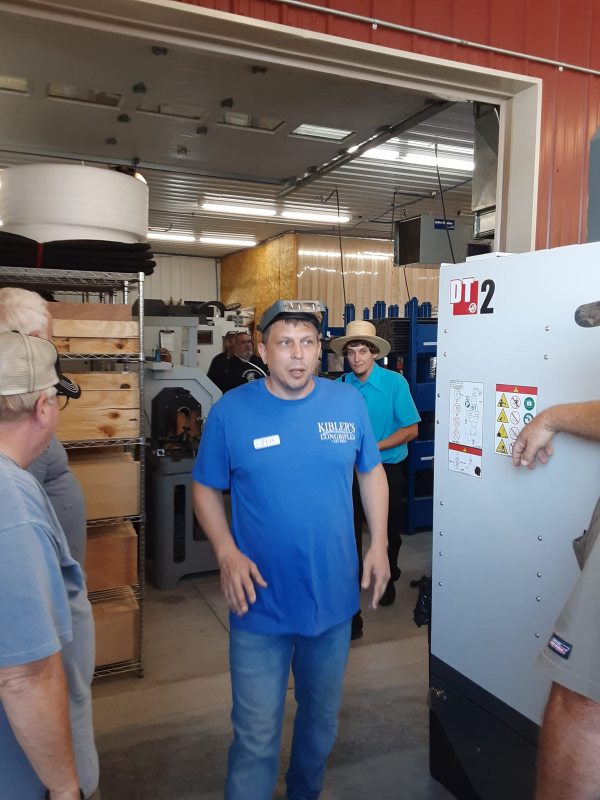 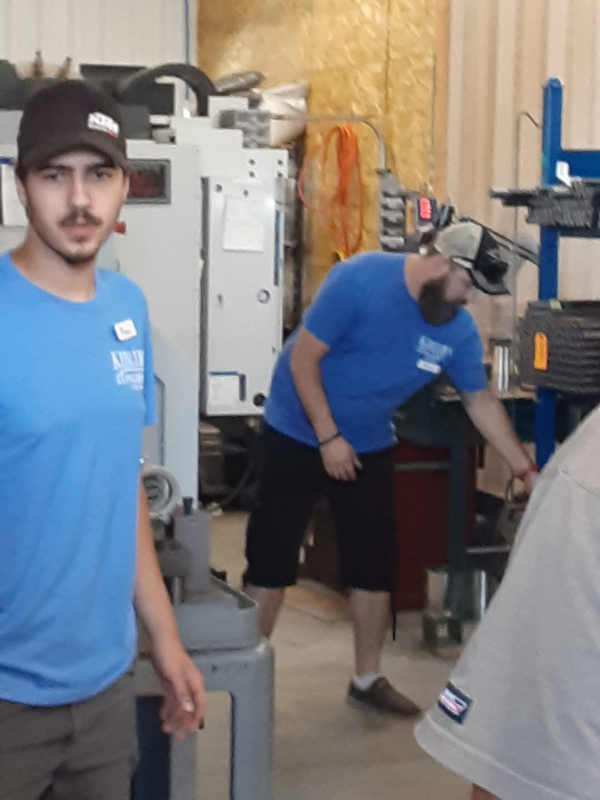 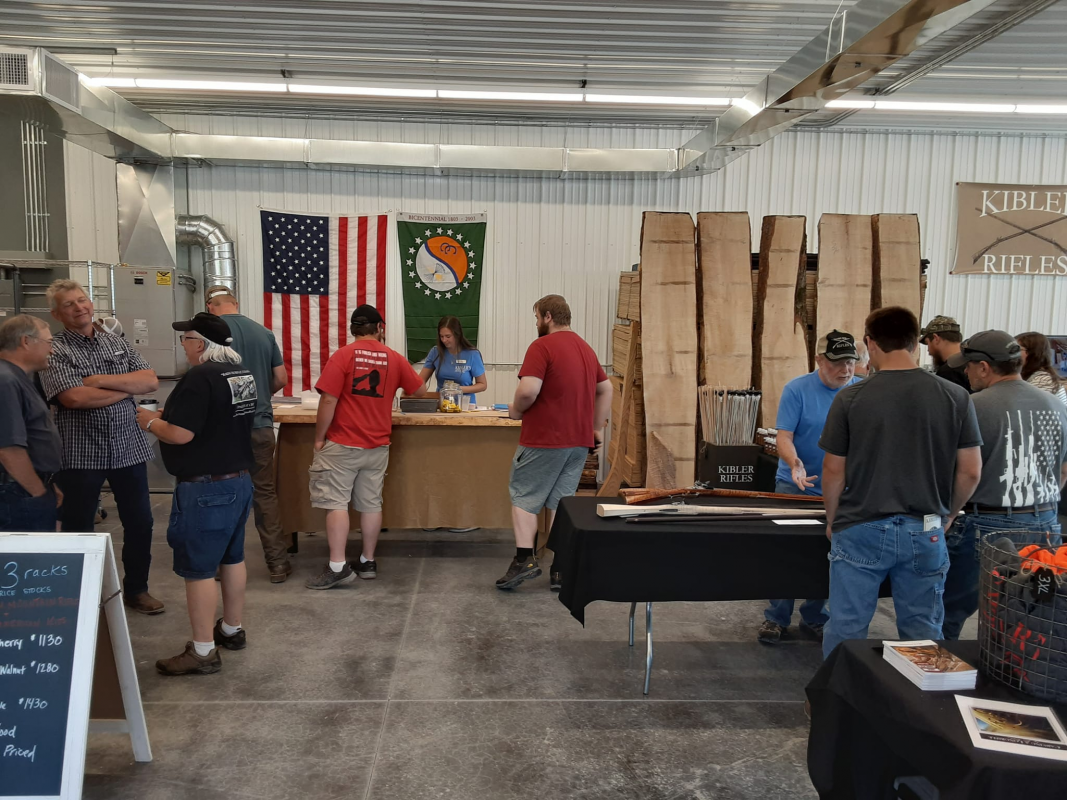 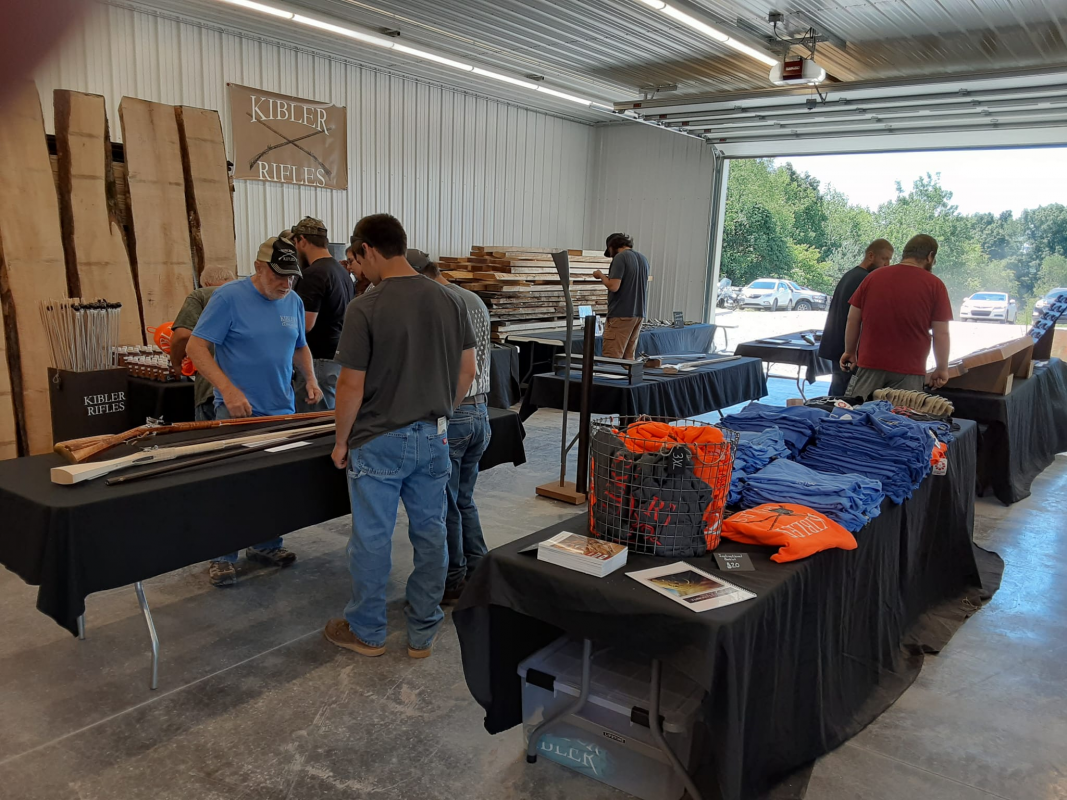 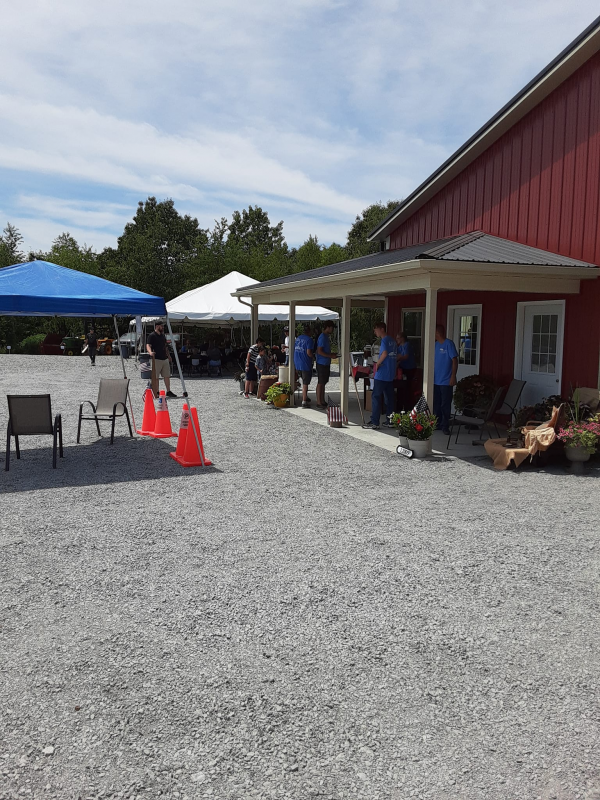 The Kibler "crew"(in blue T-shirts) were very friendly, hard working and knowledgeable. There was free food, and free conversation as well as the shop tour. Our guide ,Macen, said that the "old CNC machine take 2 or 3 people and 2 hours to make a stock. The new machine takes 1 1/2 hours or less and one person loading it; and with more precision and detail. Loire, said, they could program in the relief carving on the new Woods Runner, if they wanted to in the future!

I went on Friday. Drove from wild western Illinois. my GPS put me in Lima, Ohio as opposed to where my hotel was north of Kibler's shop.
For me, it was well worth it. People were told to bring their guns to show. I brought my SMR. I had people looking it over and admiring it like crazy, as did others who brought their guns.
One of the highlights for me was when George "Mr. Flintlock" Sutton sat down with a friend at my table. "You're "Mr. Flintlock"!" I said. Yep, he was! He mentioned he recognized my SMR as the one on the Kibler website when you click on "More Information" Yes, I am proud of that, it being on the website and Mr. Sutton recognizing it right off the bat.
Now, a for the other highlight for me was when Jim Kibler picked up my gun and said it was a fine gun.
Well, he did most of the work, I just put it together, finished it, and I have very little mechanical ability.
As for the rest of the open house, Jim and his staff put on a great event. The tent was large enough for everybody and the breeze rippling through it made it nice and cool. The shop tour was louder than I expected. I got to see two barrels milled. Also saw a young woman cutting the rough shape out of a slab of wood for the CNC machine. Yes, some of his people were really working on Friday turning out the kits and we got to see that.
The food as somebody else mentioned, was great. This all had to have cost Mr. Kibler a pretty penny. I am very glad I went and happy that Jim did this open house.
Photos later. I got home late last night.

I sure hope that he decides to do a brown bess someday.
T

Excellent follow-up reports from those of you who could attend. I'm enjoying the narratives and pics, thanks again..

Some photos I promised. We start off with the wood scrap piles being picked over. Most of the people went for the dried wood. Greener wood was in the near pile. Some staff getting things ready. The lunch line was a popular place to be as the food was great. George "Mr. Flintlock" Sutton holding my SMR (which is the rifle on pegs on the Kibler website when you click on SMR "more information"). The large tent Jim had which provided a nice cool breeze under it. Waiting for the tour and the things for sale in the background. Jim conducting a tour of his shop. Some guns Jim made, including pistols.

and some more photos. Jim had rifles on display, of course. The new Woods Runner was there. If you never ordered a Kibler Kit before, this is how you get it. A Southern Mountain on top, and a Colonial on the bottom. Jim also will build or partially build a kit gun for you. Two Southern Mountains. Other guns were on display, too. Including an unfinished percussion, a SMR with patchbox and a Colonial.

Forester said:
Just got back from Jim's open house. It was a beautiful day. Enjoyed his shop tour. I found out my colonial will be another month out. This will OK as I have heart surgery in a couple of weeks so i couldn't work on it for a while any way.
Click to expand...

You didn't happen to notice if my Colonial was ready?

sturmkatze said:
I sure hope that he decides to do a brown bess someday.
Click to expand...

Jim said about upcoming guns that he checks with what people want in designs. A lot of left-handers were there. He said that whatever sells the most would probably come in a left-handed design first. As for a Brown Bess, I think you would have to get the British Army interested in buying it before it came out as a Kibler Kit.

Did anyone ask about a Hawken Kit? Very nice pictures. Would loved to have made the open house but that trip would have been a 2 day drive from Texas just to get there.

I should mention it for those that might be wondering. People did ask if they could buy a complete kit at the shop. The answer was no, because they have a backlog on orders and it would not be fair to the people who ordered to have to wait because somebody came to the shop and got a gun ahead of them.
Seemed pretty fair and reasonable to take care of your customers who ordered before as opposed to somebody who just walked in.

Crew Chief said:
Did anyone ask about a Hawken Kit? Very nice pictures. Would loved to have made the open house but that trip would have been a 2 day drive from Texas just to get there.
Click to expand...

Jim has said that a Hawken and a Smooth bore fowler are in the planning stages. I'm pretty sure when he makes them, he wants them to sell so he can keep his people paid. His people were even working during the open house cranking out the guns. Then they had to deal with the tours taking up their space.

May 4, 2022
buck.conner
B
W
Journal of a Traditional Alberta Muzzleloader Elk Hunt