Has anyone watched Jamestown on PBS? My wife found it and thought I might like it and was wondering if it was any good. PBS usually tries to get their history mostly right. If you've seen it let me know what you thought and if you haven't heard of it it could be worth checking out. Thanks fellas.

My PBS stations didn't carry it last December. I caught two episodes this week as they have started to air the show...at 2 a.m. and 3 a.m.
I was excited as reportedly the same production company that did Downton Abbey is currently producing Jamestown. Downton Abbey is a perfect example that one may have visual accuracy and blend the story with that accuracy and customs of the time period, to contrive interesting drama for the characters. Unfortunately, Jamestown does not have the same director nor the same writer as Downton Abbey.


Now is when folks will chime in with "It's not a documentary", or worse, "IF it was a documentary, nobody would watch it" and all that drivel.

FIRST if you deliberately place the show in a historic setting, AND then you tout it was done by the same company that did Downton Abbey (an award winning, non documentary, highly authentic that people DID watch), then YES you are implying that the show will go to the trouble of being authentic. Period.

The most glaring error..., a demonstration of total laziness on the part of the director and the costuming staff....NOBODY is WEARING A HAT.

In two episodes, two hours of viewing, I counted 12 hats and two women's caps. Had they not had a shot of the slaves working in a field, it would've been down to 3 men's hats and one woman's bonnet. OH one of the female slaves had a kerchief on her head too.

All the women wear their hair down, and long, and some go around without a proper shift, or with bare arms from the shoulder to the elbow...which would've been considered naked for the time period. No stays are seen anywhere in the two episodes I saw. The blacksmith has a crewcut, and another couple of guys have shaved heads by choice, not for some malady. Characters SIR George Yeardly has short hair, and rich man Nicholas Farlow has even shorter hair, which is comical, as Sir George's hair style for the short hair of the period is wrong, but Farlow's is actually documented in portraits (neither of the actors is wearing his hair different than they do in public.) Rich woman Jocelyn, a very fair skinned blond woman, walks about without any protection from the sun..., at a time when a "tan" or freckles were highly looked down upon by the well-to-do.

The female slave Maria talks back to her mistress in public. The mistress pleads her legal cases in open court in front of a mixed audience that includes slaves. All of which is pure modern drek. The female slave would be whipped for insolence. The rich woman would have had to find a man to take her case into court as she is a widow, OTHERWISE her husband would be arguing the case, not her, and the slaves and the servant men would not have been at the court, and women would not have been there except when they were appearing as a witness.

Instead of using the customs of the time period to build drama...show the frustrations of the wealthy woman who, no matter how much money she has, is still a second class citizen to any man..., and how she has to come up with schemes to get her objectives done, by maneuvering around those customs, showing her to be crafty and smart... the show merely pretends it's a story in the 21st century but with odd, dirty clothing.

Here's a comparison of what we should see to what we get: 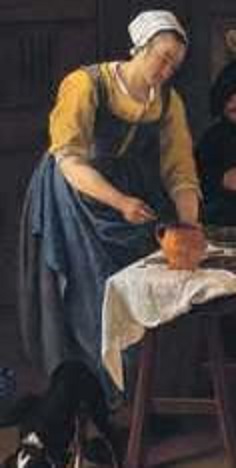 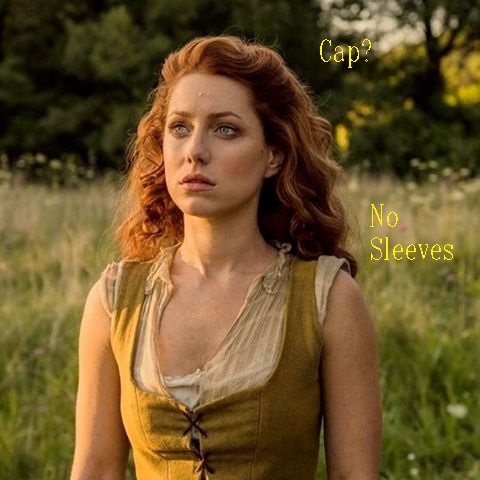 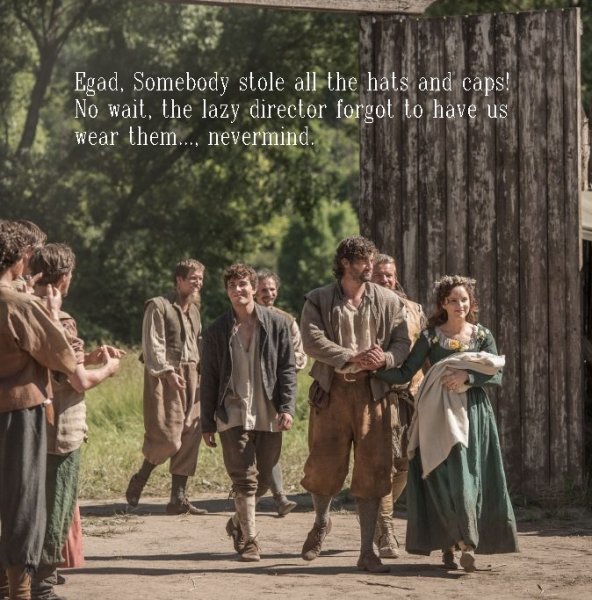 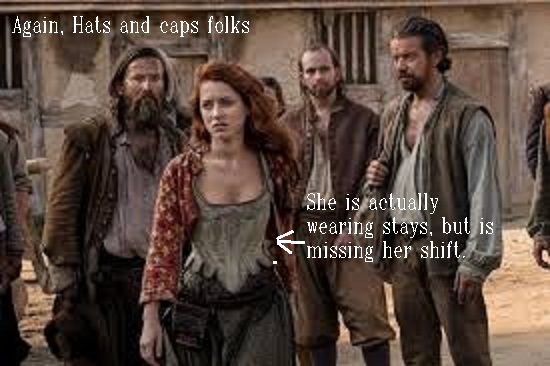 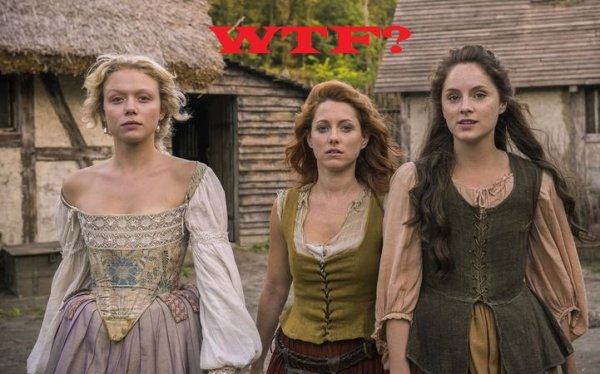 I could go on but the British newspapers called it a soap opera that is mildly enjoyable. That's about as good a review as it could possibly get.

I’m not much into soap operas.... note I say that having watched every Vikings episode .
I watched two of the Turn and three of the Terror.
For the life of me I can’t figure out why a ‘real’ story wouldn’t sell.
I understand artistic license, I understand sticking in a love story for human interest. I see some real good novels that follow real events that fill out the story a bit, that sell well, but I don’t understand on purpose screwing up things.
Why wouldn’t a real Henry the eighth story be as compelling as Tudors. What would a real William Wallace lose over Braveheart. The Iliad is a lot more exciting then Troy.
I look at a few ‘good’ movies like Tora Tora Tora, from the Earth to the Moon or Band of Brothers Apollo 13 Gettysburg master and commander and ask why this model can’t work.
S

Loyalist Dave, you got me to laughing. Thanks, I gave up on PBS when they started the political crap.
C

I noticed a long time ago that movie stars hate to wear hats! They cover up part of their image\ego!

Many movies, you will see the star in a beginning scene wearing a hat, but it quickly gets lost so the star can show off his entire image.

Well in at least one instance, the actor firing his matchlock blew on the match to heat up the ember before firing. However, I have never seen anyone light the match. All too quickly they fire one of the matchlocks after being carried for a long time. They never adjust the match. Sure would have gone through a lot of match.

Where are the farm animals?

tenngun said:
What would a real William Wallace lose over Braveheart.
Click to expand...

Actually, it is probably a BETTER story..., in fact there is some evidence that what we consider the basic story of Robin Hood, is actually the story of William Wallace.

Captjoel said:
I noticed a long time ago that movie stars hate to wear hats! ...,

Many movies, you will see the star in a beginning scene wearing a hat, but it quickly gets lost so the star can show off his entire image.
Click to expand...

Actually I think it's more the director being lazy, as a brimmed hat requires more difficult camera angles, and lighting. Same with the haircuts. Making the cast all have proper hair is more time consuming and expensive. AND they all seem to think bald guys make good villians, and that's cheap to do.

Grenadier1758 said:
Where are the farm animals?
Click to expand...

Yeah, and the only crop they grow is tobacco. Where are the food crops? Only the "naturals" are growing maize.

And with all the brides imported, there should have been a lot more than just one baby.

Loyalist Dave said:
Actually, it is probably a BETTER story..., in fact there is some evidence that what we consider the basic story of Robin Hood, is actually the story of William Wallace.
Click to expand...

Never heard that one.... I think most of our legendary heroes were real people although distorted by myth.

William Wallace second son of a poor knight,
Was an archer, and some say poacher,
Edward I of England moves in to take control of Scotland, placing Edward's choice as king upon the Scottish throne...
That king eventually rebels against Edward I, and is imprisoned in The Tower, (the Scottish king is now absent from the country)....
Wallace is already an outlaw, commands a band of outlaws (the merry men?) perhaps Wallace was an outlaw for poaching or perhaps for killing 3 English soldiers..., Wallace and his men raid the local English stronghold and Wallace hacks the Sheriff to death.
Wallace then becomes part of a general rebellion to support his king against improper authority...
Wallace loses the battle at Falkirk, and flees into the woods carrying on guerrilla war for the next seven years...,

Check out this documentary with Tony Robinson
Pretty close to the legend....and Wallace lived well before the first references to "Robin Hood" appeared....

Interesting. A could be for sure, Robin Hood appears in mythology about fifty years after Wallace’s death. Wouldn’t that be a chuckle if agreat English folk hero was Scot. Almost as good is fathering the next king. No one remembers Edward the third but Robin Hood is world famous

tenngun said:
No one remembers Edward the third but Robin Hood is world famous
Click to expand...

Indeed
And folks don't remember the details sometimes of Robin Hood. For example I saw a bumper sticker earlier this summer..., it said "Robin Hood was right" Now based on the other stickers on the "clown car", I knew the owner meant take from the rich and give to the poor (because rich people are somehow evil and exploited the masses, yadda yadda yadda). So I saw the owner of said car getting into it, and I said, "I like your Robin Hood sticker". He said, "Thanks", and I added, "I agree we should take back taxes from rich government, and give back to the taxpayer." (Which is what Robin Hood actually did) The sticker-owner merely scowled and drove away.

Folks forget that Robin Hood in the Erol Flynn version, and Kevin Costner version, was the leader of a tax rebellion, JUST as they are not taught these days that Lexington and Concord were about gun control, that morphed into an all out tax rebellion.

But back to Jamestown.., I could only watch the two episodes.

Believe it or not, they have renewed the series for a third year.