Picked this up this afternoon at an antique shop near Lancaster PA. Don't know much about it other than it appears to be quite old. Stamp on the blade appears to be GRAYSON, but I could be way off with that. Measures about 8 1/4 overall, blade is about 3 1/4 inches. Bone handle. What are your thoughts on age and origin?

Here are a few more. Last is a photograph of one on display at the Museum of London. I don't place a whole lot of faith in their age estimate, but the dimensions they give are darn close to this one and the pattern in the handle is also very close. You can see it here.

Interesting old knife. The name doesn't ring any bells. A wild guess on my part would date it sometime in the 19th century (just based on style), though I could be way off and it could be older or newer. I'd hit up the guys over at bladeforums dot com. Those guys are to knives what we are to MLs.

PS: YES bladeforums dot com is by far the premier site for knife experts. They will know what you have there - fanatics about knives!
Last edited: Sep 4, 2021

I would call that a "cotton knife," based on the blade shape, although that is now more frequently called a "cotton sampler" blade. It is similar in some respects to the blade shape called a "rope knife." I am not familiar with Grayson as a cutlery company, but I would agree that is what appears to show on the blade. I checked the references I have on hand, and could not find Grayson in any of them, but I have one more online resource to try.

The McKinley Tariff act of 1890 required that the name of the country of origin be placed on imported goods, so I would guess it is either pre-1890 or possibly of domestic (US) manufacture. The 8th and 9th photos in your first post appear to show some "pith" in the inside edge of the handle scales, which suggest to me that they may be antler (stag) with the rough outer surface polished off, rather than bone, but I could be wrong. The criss-cross design on the handle has the appearance of being hand-cut, which (I would think) would be consistent with a pretty remote date of manufacture. In his book, Pocket Knives, Bernie Levine shows an old Sheffield folder by Samuel Wragg that is similar to your knife in some respects, and he suggests a date range of 1830's to 1860's. That is certainly not definitive, but I would like to think your knife might fall into the same range.

I'm not much help, really, but the "feel" I get from that knife is mid 19th century. It certainly has the appearance of great age, yet it appears to still be usable. It is a great old knife, in any event. Thanks for showing it!

ADDENDUM: I did find this, in Trademarks on Base-Metal Tableware, by Eileen Woodhead: 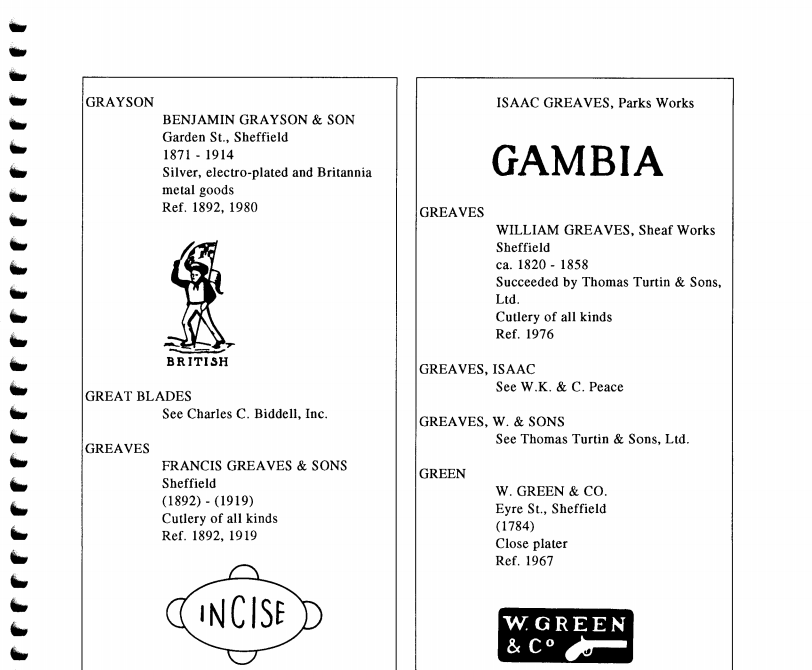 However, I don't think it is the same Grayson. Dang it...

Great find. Really like that. If the folks at blade forums can give you more info please let us know.
T

Looks a lot like a sailor's jackknife from early- middle 1800's. The officers used to break the sailor's pointed blades to avoid stabbings, and knife companies began making jackknives with blunt ends. You see some similar knives with "U.S.Navy" stamped on the blade, usually with smooth bone or bark antler. Some have even been fitted with a neck lanyard. Don't know if yours is U.S. or Brit.

Treestalker said:
Looks a lot like a sailor's jackknife from early- middle 1800's. The officers used to break the sailor's pointed blades to avoid stabbings, and knife companies began making jackknives with blunt ends. You see some similar knives with "U.S.Navy" stamped on the blade, usually with smooth bone or bark antler. Some have even been fitted with a neck lanyard. Don't know if yours is U.S. or Brit.
Click to expand...

Does it look like or can you tell if the point has been broken off?
T

Eutycus said:
Does it look like or can you tell if the point has been broken off?
Click to expand...

I think this knife was made in this blade shape; most of the broken blades are square across the end; the old saying was the officers would stab the point into a mast and break the blade sideways. I really don't know. In 1972 when I was in service, lots of sailors carried the stainless USMC utility knife bought at the gedunk for $5.00. This replaced the cheap plastic handled 'boy scout' issued version.

44-Henry,
To the best of my poor knowledge

This is a Cotton sampler knife, from the buldge on the fore end of the blade. To go further it has a pinched bolster with a single thread. Its full name might be called A Bare headed cotton sampler.
The perfect knife forum is AAPK or All About Pocket Knives. I recommend it to any one interested at all about them. Bye the bye, Great knife! I'm envious.
John

Eutycus said:
Does it look like or can you tell if the point has been broken off?
Click to expand...

Sir , Respectfully, there has never been ' evidence ' that the story about broken off Tips is any more than a fanciful tale that just won't die.
John

I agree. It looks to have been made as a sheepsfoot/spey/sampler style blade shape.

Actually they are called speying blades

Does not look to be broken, clipped blade of various makes and styles for various reasons/uses go way back. Take the Tanto blades of Japan for example.
I am no knife expert but it looks like a fine blade and would be interesting to know the full detail.
As for sailors clipping the tip; the storey comes from various sources of the old wood ship days when crews were Pressed into service. Two basic reasons given are:
1) Break the tip off to prevent accidentally poking the sail while aloft in the rigging. Note the style of what is known as a "Riggers Knife"

2) An attempt to curb knife fights on ship, supposedly clipping the tip makes it harder to fight with (so the story goes).

I have a replica of an 1800s Riggers Knife, very handy blade indeed.
R

I've done quite a bit of research on old pocket/folding knives and when you get into the pre-1840 era the surviving knives with sound documentation become very rare. I've also seen knives actually made around 1920 that from their condition look like they must have been made in the 1700's. SO....don't be disappointed if the knife isn't as old as hoped. See if you can get in touch with someone in Sheffield. There was a woman there, a college professor, that maintained a lot of the old records. All the stamp marks are there, in a vault.
There are collections at Valley Forge, etc. with pruning knives from the 1920's that are claimed to be Revolutionary War era artifacts. People GET MAD when you ask for the documentation verifying the age, in many instances- there isn't any.
The square tang on your knife- generally the better builders used a square tang as it required more skill to get the blade to open and close correctly. It looks like the bolsters are attached to the liners, not integral. Sheet metal for liners were not that common until after ABOUT 1840-1850 when manufacturing could produce affordable sheet metal, before that a lot of knives had integral bolsters/liners.. BUT nothing is etched in stone- I'm speaking in general terms.
You have a rare find, well worth the effort to research.
You must log in or register to reply here.
Share:
Facebook Twitter Reddit Pinterest Tumblr WhatsApp Email Link