ID on a Charleville Musket

Thanks hopping. So, I assume you mean 1763/1768, not 1863 etc. Although it's extremely hard to see on the lock, I have a D and some sort of "design". By the "previous post" with respect to the frizzen, which image are you talking about? The only part of my gun -- the subject of this thread -- that doesn't look right is the frizzen. The bottom part, where there is usually a curly-cue has broken off, and the top is either bent or just different from stock. I assume it's a replacement. The image below is from my gun, and I wonder if you know more about the other markings on the stock. Also, is there any doubt in your mind that this is a genuine Charleville? Thanks 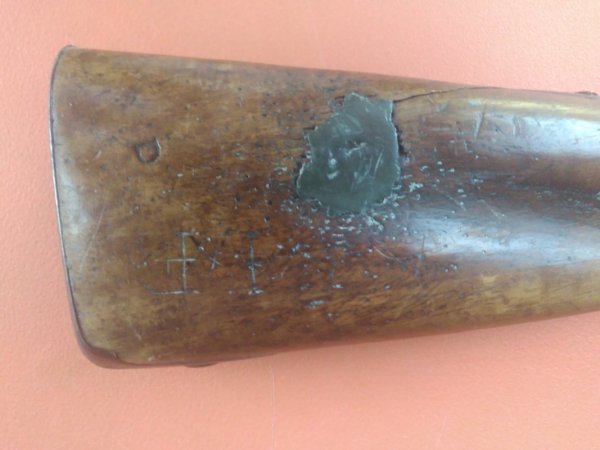 I apologize, I was definitely talking about the 1763/1768 Charleville. I blame my keyboard of course.

As for the other markings, many of the muskets and rifles that I get to work with have carvings from the soldier who carried it. The military markings are usually on the buttplate tang or on the plate on the wrist. These muskets took a beating during the war and many parts had to be replaced or repaired. The key feature of the Charleville is the frizzen leaning toward the fron site more than other muskets of the time. This kept the frizzen from bouncing back and breaking the flint when the feather spring got weak.
S

Thanks again, hopping. But, then, the last question, is there anything about my gun that suggests it's not a legit Charleville. It came into our family in 1947. Thanks

I believe that you have a 1768 revision of the 1766 Charleville that has had the frizzen replaced some time in its long history. This was common for muskets to be repaired in the field. Also it was normal for them to be repaired after the war. The feather spring on your musket and the pan look to be authentic Charleville. If you look closely above the name "Charleville" you might find a faint "D" with a star above it. I see nothing that would negate believing it to be an authentic Charleville of the model that was given to the US by the French and that was repaired long ago. The aging of the frizzen and the frizzen screw suggest to me that the repair was done in the 1700s.

If you could show a close up photo of the inside of the lock, it would help.

Here is some information on the Charleville Musket history:
"The Charleville musket served throughout countless conflicts including the American Revolution, the French Revolution, the Napoleonic Wars, and the War of 1812. It was manufactured in the French Royal arsenal in Charleville, France (Champagne-Ardenne region). It was the standard issue flintlock musket of the French Empire throughout the 18th and the early 19th centuries. The original French musket was delivered in 1717 and was continually improved through the years until an all-new model was issued beginning in 1763 near the end of the seven years war (French and Indian War to us). The 1763 production form was reinforced for the rigors of combat but these additions proved in excess and the added weight to an already unwieldy and long weapon. The Model 1763's sturdier design proved to be a bit too heavy, so in 1766 the musket's design was lightened. The barrel wall was thinned, the lock was shortened, the stock was slimmed, and the Model 1763's long iron ramrod cover was replaced by a pinned spring under the breech. The trumpet shaped ramrod of the Model 1763 was also abandoned in favor of a ramrod with a lighter button shaped end."

"Though usually considered to be a separate model, the Model 1766 was often referred to as a "light Model 1763" musket, especially in U.S. Revolutionary War invoices. Despite being thinned down, the Model 1766 proved to be rugged and reliable. The Model 1768, is in fact a revised version of the basic 1766 musket. The primary differences are a third spring loaded barrel band and the movement of the bayonet stud to the top of the barrel. The musket is 59 inches overall as opposed to 1766 model that is 60 inches in length."

Thanks hopping. By a shot inside the lock, do you mean removing the lock as in your pic above? Or just a shot of the lock with the frizzen forward? Yes, there is a very faint mark above "Charleville." Here's a pic. 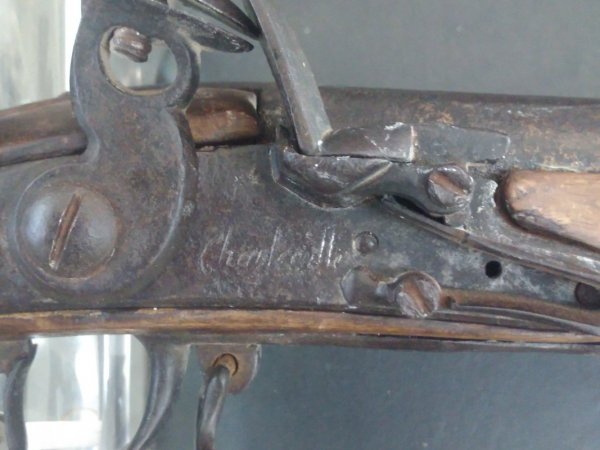 I meant a close up photo of the back side of the lock by taking it off. The Charleville locks had inspector marks on the back of the lock plate such as the "I-B-I" in the photo. The configuration of the lock's innerds helps identify it, such as the shape of the bridle. The lock in my photos was conserved by removing all active rust while maintaining the patina and replacing the bolt in the cock with a reproduction screw so the musket could be put on display with its history. The history also detailed the conservation work. The musket had been in the same family since the Revolution.
S

I'm a little nervous about remove the screws. Will they come off easily? We've only had it since 1947, but judging from your description it hasn't been off since the revolution! Is this safe to do? Thanks again hopping

Scrannel said:
I'm a little nervous about remove the screws. Will they come off easily? We've only had it since 1947, but judging from your description it hasn't been off since the revolution! Is this safe to do? Thanks again hopping
Click to expand...

Do you have a photo of the side plate that shows the condition of the heads of the lock screws? I would be happy to talk to you about it if you have some contact info. Where are you located?
S

Here is, hopefully, a helpful shot. Will send you a message in a moment. 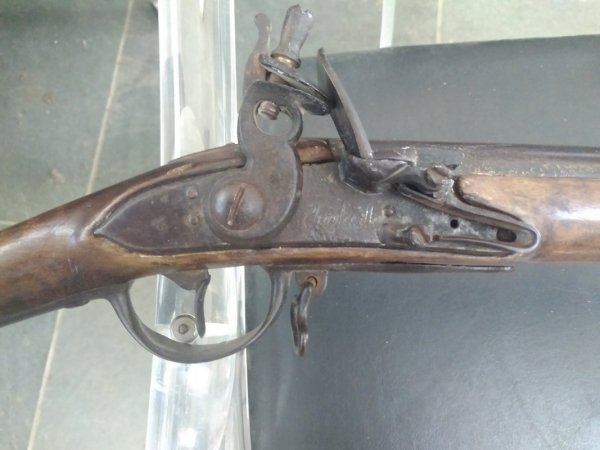 OK, for those who haven't fallen asleep over this thread, here's what I found out in my conversation with member "Hopping" who is an expert on Charleville muskets and who has been a Federally Licensed Gunsmith for 56 years and does restoration, conservation and preservation of antique firearms for museums and collectors. So, after measuring and taking more pics here's Dan's expert opinion.

My gun is a 1768 Charleville. Which I had never heard of. To quote Dan:

The primary differences are a third spring loaded barrel band and the movement of the bayonet stud to the top of the barrel. The musket is 59 inches overall as opposed to 1766 model that is 60 inches in length. Your ramrod (also the frizzen) is not original Charleville. This is also common for a musket that saw battle. "

All checks (my first length measure was off because I was using a single ruler).

Member "Flintlock 1640" you were dead right about the lead "splotch" most likely being a hand-poured repair. Not a ball hit. My apologies for doubting you.

And, of course, it is indeed a legit Charleville. (Merci à mes amis en France!)

Thanks to all here for helping me sort this, this great site, and especially to member "Hopping" for taking the time to walk me through the world of the Charleville Musket, our gift from France that helped us create our nation!
S

Member Hopping also added this -- which to me speaks to why we care about these old devices so much in the first place: (and Thanks again)

"Wouldn't it be great if you knew the history of that musket and who carried it. It was made in the little town of Charleville, France right after the French and Indian wars. It was probably used in the French conquest of Corsica in 1768. By 1777 it was stored away as obsolete since there were two new models produced in the 1770s. In 1777, Ben Franklin and the Marquis de Lafayette quietly sent 20,000 of the obsolete1766s and 1768s to New England by way of the Caribbean islands because they wouldn't be missed. The new US only had the Brown Bess Muskets they could take from the British Colonial arsenals such as at Concord, MA on April 19, 1775. That man who brought the musket into your dad's store was probably the descendant of the man who carried it in the Revolution. It could also have been used in the War of 1812 and/or the Mexican War. I highly recommend reading the history of the Marquis de Lafayette. A truly fascinating man."
You must log in or register to reply here.
Share:
Facebook Twitter Reddit Pinterest Tumblr WhatsApp Email Link