I have this old knife, what is it?

I bought this old knife off ebay. dose anybody know if it was associated with the black powder era? I have no idea. it looks ancient but very tight, it has heavy patina on the blade and antler/bone handle. the handle is one piece with one pin and the hilt is brass. it is 16 1/2 long and has a blade 11 1/2 in. 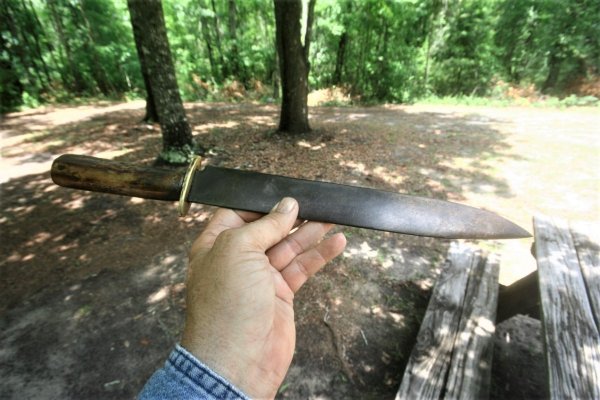 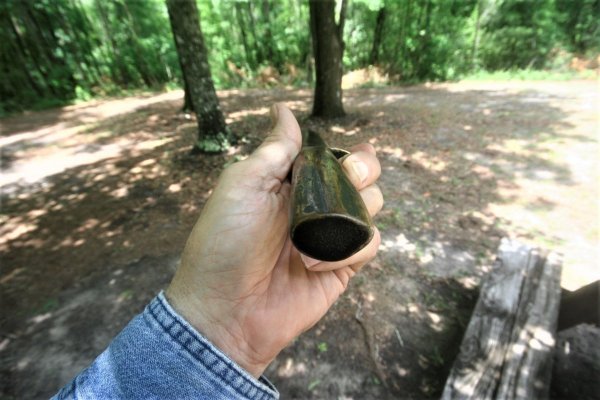 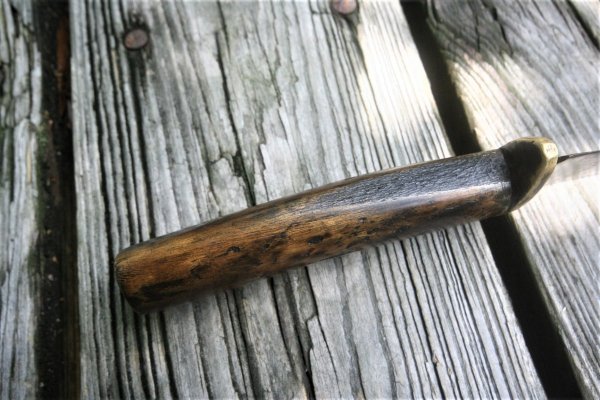 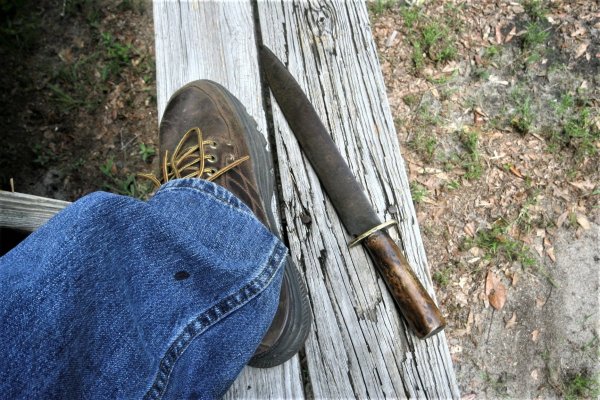 Very nice knife anyone would be proud to have in camp. But, my opinion, certain items like horns, knives with antler handles and other things simply cannot be dated just by looking at them. This whole forum is dedicated to folks who like to make and use things from the past, even if they were made just last week. If it doesn't have identifying markings, just use and enjoy.

You got yourself a beautiful knife, there, Olskool.

To me, it looks like a late 20th - early 21st century replica of an old-time rifleman's knife. There are some craftsmen "out there," including some who frequent this board, who make beautiful reproductions of very old artifacts. Some of these same fellows are also very good at giving those artifacts the appearance of great age. There was some musing on the ethics of this practice on the Contemporary Makers blogspot a while back, right here: Aging Contemporary Guns

I think there may have been a discussion on the ALR Forum, too, but I'm not sure of that.

I make some knives now and then, using commercially available blade blanks. I try to give the blades some patina in order to give them character and the appearance of having some history of use. I'm not trying to fool anybody and would never present them as anything other than what they are: New knives that are made to look like old ones.

I have warily bought a few things from online auctions, and gotten a couple of bargains and I paid more than I should a couple of times. I think some of the sellers don't really know what they have, and unfortunately I have seen a couple of things for sale that were obviously not what they were represented to be. The old saying, "Let the buyer beware," has never been more true.

Anyway, I think you have a very nicely made but relatively new knife. One like that, with a well finished blade, an antler haft and a neatly fitted cross guard from a custom builder might cost anywhere from a couple hundred dollars to over a thousand, depending on who the builder is. Reselling the knife, you would be lucky to get the merest fraction of that, unless you could verify that it was made by a famous cutler, and it is in pristine condition.

I'll reiterate, you have a nice knife, and I sincerely hope you enjoy having and using it!

Any one of us would love to have that knife!

yep! it shure lookes like a RIFELMANS KNIFE! and a real beauty!

Whether new replica or antique, I believe it to represent late 19th century plains knife (hunters knife). I am no expert however, I just believe it looks buffalo hunter ish.
Walk

Blade looks like a classic riflemans knife, probobly not period correct, but still a good find none the less.

well I got a little info on it. the man i got it from said it was found in an old barn in Kentucky. he said he had been collecting knives all his life and he really believes it is defiantly 19th century. I don't know but that's the info he gave me,,,,,,,,,,,,,

Just for the sake of discussion...

There is a subtle difference between being honest and being forthright. There are a lot of old barns, and new knives can be put in them and later "found." Someone in that situation could honestly say he found a knife in an old barn. even if the barn was made in 1812 and the knife in 2012.

I've been in a few old barns. Some of them do in fact contain wondrous things. Many, if not most, old barns also provide homes for small rodents, which universally enjoy gnawing on bone and antler. I understand this is one way they get calcium in their diets. I can tell you from personal experience that if an object of bone or antler is left in a typical old barn for any appreciable length of time, chances are pretty good that it may acquire some rodent chews. I don't see any on the knife in question.

In response to your post on the ALR forum, one of the fellows also pointed out that the antler shows no age cracks, and then there is the color. It has a shade that suggests treatment with a dye or reagent rather than a natural color change that might occur with handling and exposure.

The blade also shows very little actual wear or evidence of sharpening. Also, it is interesting (to me) that the blade only has a ricasso showing on one side. It may have been the maker's preference or style to make blades that way, and this unusual feature may eventually help identify who made the knife.

Ralph Marcum wrote a nice piece on rifleman's knives for Muzzle Blasts magazine, back in the mid-1960's. I don't remember which issue right off hand, but I'll try to look it up. This brought these knives to the attention of the general muzzleloading community. The long, straight blade, simple crossguard, "stick tang," and antler handle match very nicely the type of knife he described.

So, I may be wrong (it's been known to happen... just ask my wife!), but to my eye, the design of your new acquisition would be consistent with a rifleman's knife, and certain other features suggest (to me) that it may be of relatively recent manufacture.

As a parting thought, it has occurred to me that the "buckskinning" game really took off in the late sixties and seventies. People who were in their twenties and thirties at the time are now getting older, and a lot of them have sadly "gone under." There are relatively few of the younger generations who have any interest at all in crazy grandpa's old guns and knives, and as we lose some of the older folks, we are seeing a lot of their plunder now up for sale. I wonder if this knife might be an example of that.

In any event, it is still a nice knife! Enjoy it!

Old or new it looks nice good. If you didn't buy as an I investment(doesn't sound like you did), just enjoy it.

My grandfather found an old Japanese sword in a barn back in the 1930's I think it was. Has some gold banding and some areas where it looks like gems once resided. One day I will get it from my uncle and try to find more info about it. Haven't see it in 25+ years but I KNOW it was a barn find. I will get it someday with 2 other swords and his Garand he had in Guam in WWII.

It reminds me of the type of knife carried by nearly every confederate soldier in the War Between the States. The general description being ”with a blade between 10 to 18 inches in length. Made by a blacksmith from an old file or saw blade”. Of course that also describes a mountain man or plains knife.

under high magnification you can see it was definitely made from a large file. you can see the 100s faint lines from the file. I have also been thinking a civil war era confederate knife, or copy, it looks like original ones I have saw on the net. Notchy Bob brings up a good point. if it was found in a barn the rats and squirrels would have gnawed the handle. but who knows for sure, it is fun to surmise,,,,,,,,,,,,,

olskool said:
under high magnification you can see it was definitely made from a large file. you can see the 100s faint lines from the file.
Click to expand...

Cool! That surely means it was forged by an accomplished blacksmith (as opposed to being a commercial blade blank). I believe it takes a good deal of skill to hammer out a blade of that size with that neat a profile and finish. Somebody knew what he was doing.


olskool said:
I have also been thinking a civil war era confederate knife, or copy, it looks like original ones I have saw on the net.
Click to expand...

I think you may be on to something there. Images I have seen suggest the Southern boys liked big knives.

Cool looking for sure.
D

I don't think they made a drop point knife back then.

Howdy
For what it's worth, I agree with Notchy Bob all the way. I've seen no indication of rodent activity on that handle. The color IS off for antler of that supposed age and usage. All in All, a very nice; convincing copy,

but I agree, probably left in an "Old Barn" after being made in the 1900's? I don't think that it's being put into the barn was part of an enemy conspiracy to dupe the public? I'd sooner believe that possibly the knife was just a great home made knife, and used to butcher animals on the farm? At that time, the butchering room was part of the barn, and the knife as just left there after a butchering job was finished. I doubt that anyone ever thought about deceiving the future owner/buyer?
Here again, just my thoughts. I know it's not much help in establishing the credibility of the knife's lineage. But I thought I'd get into the conversation for whatever my thoughts are worth?
I hope everyone is staying safe during this virus thing?
Also: I hope that sooner, rather than later, the rendezvous' will get started and my sales will go up?