How to make the stock look old.

I really dont think you can fake it! I may be corrected.! I own a few old English unmentionables Turn of the century stuff and one 1835 muzzle loader. All seem to be really well looked after but shot an awful lot. The patina on the old Walnut is almost impossible to reproduce. Why not enjoy your guns new look.
M

In antique furniture and vintage motorcycle restorations I often have to make new materials (wood, metals, leather, etc.) appear old to match. I have many tricks. A very effective way to give new wood “instant age” is by applications of various dilutions of potassium permanganate. It’s an oxidizing chemical. I’m not sure it’s browning effects would be appropriate for maple or walnut stocks to make them look like true antiques - ethically appropriate or aesthetically appropriate. Anyone building a replica of an antique firearm may want to try this chemical and then oil finishing on scrap wood. It’s fast acting and irreversible so you have to be well practiced before using it on a good stock. It’s not easy to do blends - more of an overall aging.

While the appearance of a particular style of may influence this, my preferred “look” of a muzzleloader is what I would describe as a “moderately aged”. An example is my Lancaster built about 5 years ago which got a bit of a head start with the browning of steel parts and tarnishing of the brass. The wood, while nicely finished in a dark tone, was not aged/distressed....But this is the most likely part of the rifle to acquire character marks and finish wear with use over time. Given this bit of a head start, the ongoing honest wear of shooting and hunting should have both of us taking on the “battle scars” of use and age at(hopefully) the same pace..... 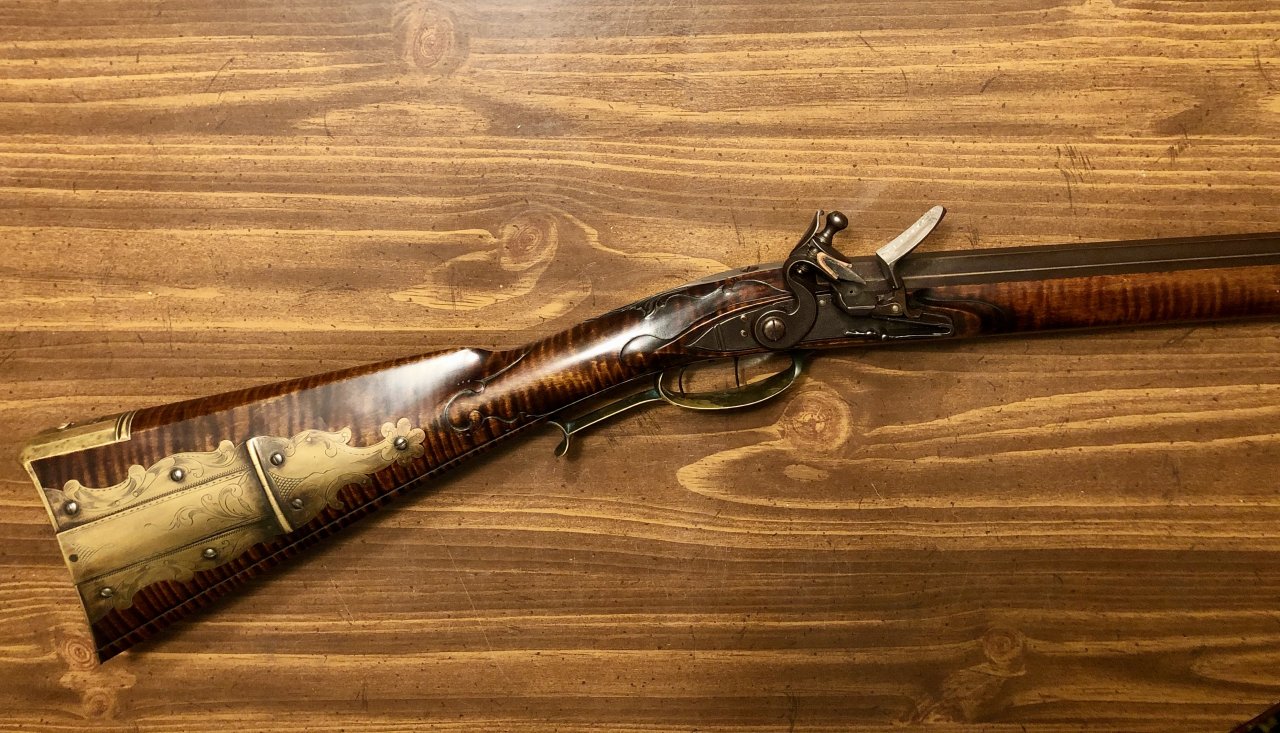 It’s a really strange debate this, and I think one that is directly tied to how each of our brains work. Some people say do whatever you want in regards to finish, choose of wood, or architecture, but are strictly ‘new’ in regard to this particular argument. Some are just the opposite. My ancestors would have bought a new gun once every 50 years or so, so patina’d would represent my family gun better than a new one. I also like plain guns as my people would have skimped in every way they could so they’d have something left in the kitty for shoes. I get some people don’t live in the way their ancestors would recognize or otherwise feel an attachment to them, but that’s why I like what I like in my BP guns. Similarly, a feller might come from a more affluent background and like what their ancestor might have carried as well so likes a fancy gun in new condition. The strange part to me is the moral outrage some people have towards patina. Guns like this are no different to me than jeans. There’s a difference between buying jeans that are tumbled to give them some wear and make them more comfortable from day one than buying jeans that are torn at the knees to make a hipster look like he does hard work when he doesn’t know the difference between a hammer and nail..... Pawpaw liked his jeans blue-black and stiff as a board because he had a factory job and could afford to have new jeans and it meant something to him to have them, while I have 5 pairs of his old c1950’s farm work overalls and wear them all the time. That means something to me. It takes all kinds, and like virtually everything else in life, there’s no right answer here.
S

G O Bushcraft said:
I have a new to me Dixie Gunworks Tennessee long gun and want to shade certain areas on the stock to make it look older than what it is. I don't want to buy bone black but only as a last result. What can I use to get this effect?
Click to expand...

Shoot it. Use it. Carry it. A lot.
Handle it when your hands have greasy burnt powder residue on them.
I have an Issac Haines-type smooth rifle that I fired well over 2,000 times the first 8 or 10 years I had it. It had been carried countless hours as well. By then it looked like a well-maintained antique.
R

Hard to explain, but many of us know that extra little something (?) you get when shooting an original period gun.
The artificial aging gives me a bit of the same thing, to a lesser degree. For some of us the antique type finish is just an extra little benefit we receive while shooting. Again, difficult to explain.
Here's a little sample of Mike Brooks aged finish. Always thought it was attractive.... 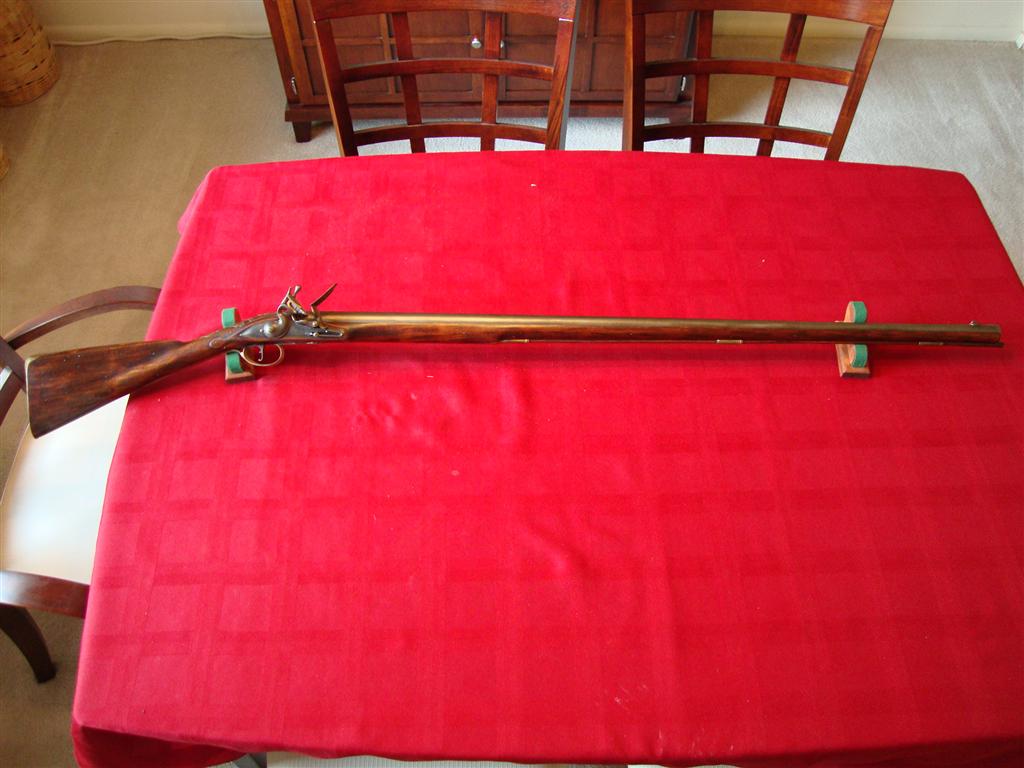 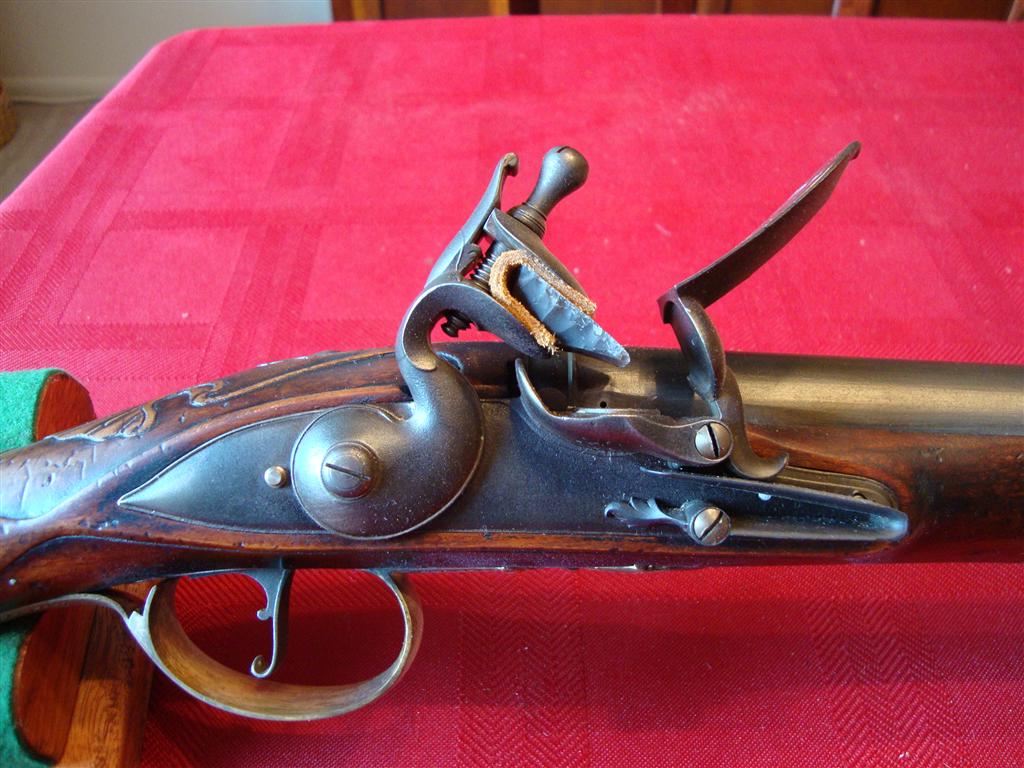 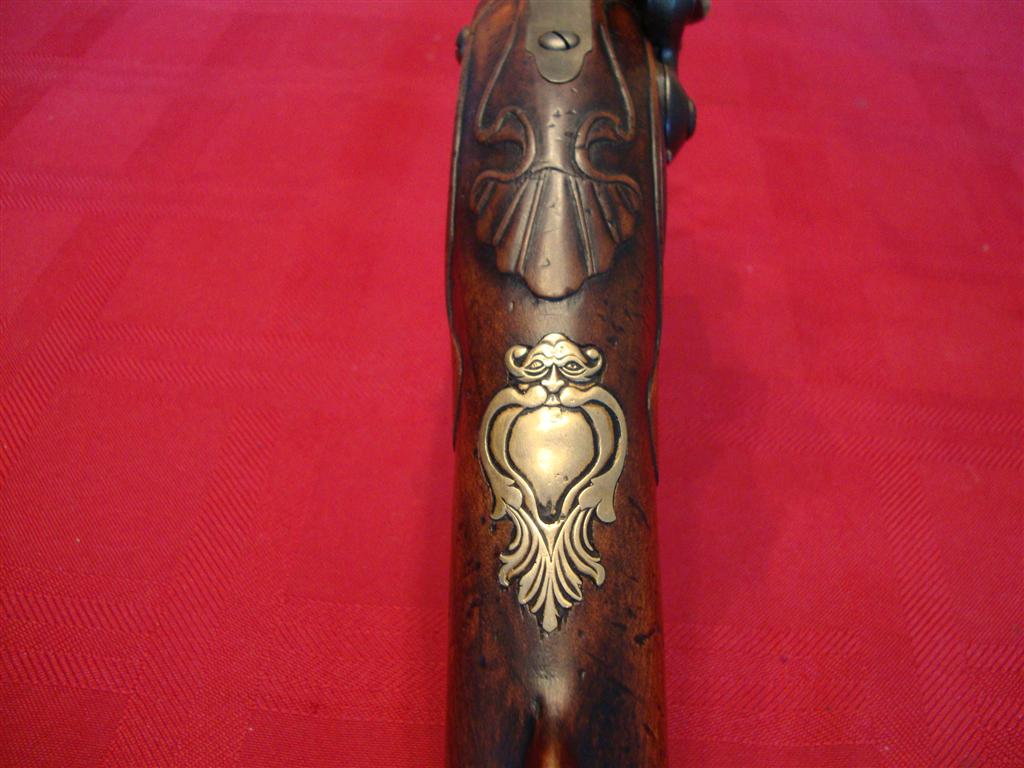 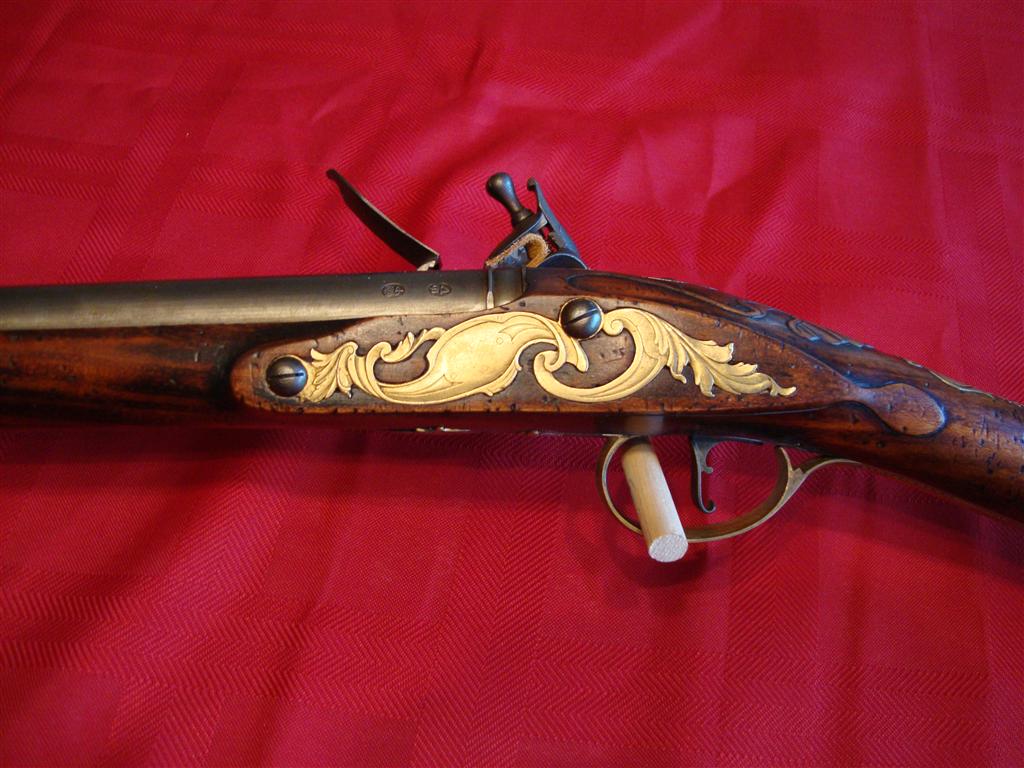 I know someone who came in from shootin’ and left a fine contemporary longrifle in a case in the back of a pickup truck bed. He discovered it sometime later well aged. He carried it back to the maker to have it restored who told him that it looked better now than when it was newly made. I saw it on display in Gunmakers’ Hall at Friendship and thought that I was looking at an Armstrong original.

ord sgt said:
I agree with most of the other members. Use your rifle. Target shoot, hunt with it . Natural wear will occur and the end result will be worth it.
Click to expand...

Exactly, why fake it...use it and make it real. I restore them better than new. Second life and real life use scars. My son or grand child can add to the aging.
F

In my opinion, you want to make the gun look like it was USED and not OLD. The last thing I would want is for someone to see a gun I artificially aged and say "I bet if you restored that stock, it would look really great". The most important things is Restraint. When you see some of these guns that have so much "ageing" one would think that the gun would have to been used for 400 years to get that kind of look. Lawrence A has it right, you don't want it to look like cheap furniture or to have a comment like "Boy, too bad it's so beat up". Ageing has to come from within the wood, just not just on top of it.
F

Art Caputo said:
I am also a proponent of lletting normal use age the rifle......not only the stock but the barrel lock and hardware as well. Otherwise, if initial darkening of low areas and and metal to wood contact area is desired, IMO, Bone Black is the easiest and most effective way to achieve an aged appearance. If done I think it’s also important to also create some aging effects on steel, and brass parts to maintain harmony with the rifle. Jim Kibler has a video explaining how to apply Bone Black. He also sells it.
While I’ve owned this rifle, built by Jack Hubbard, for about 15 years, it was originally aged. Jack’s a master at aging guns and accessories.
View attachment 62473
Click to expand...

I recall reading a great many years ago about a military rifle being restored. There were two crescent shaped gouges along the underside of the butt. The restorer wondered what caused them and decided to make a cast of them. The cast clearly showed the indentations were of someone's two front teeth, probably the result of a verticle butt stroke. That rifle had seen some action. Thats the sort of thing that really gives a gun well used character.
You must log in or register to reply here.
Share:
Facebook Twitter Reddit Pinterest Tumblr WhatsApp Email Link