Hoping to learn more about this rifle...can you help? ;-)

Years ago I did a decent size favor for a buddy and unexpectedly, and generously, he thanked me by way of passing on this long rifle.

Sadly it has been a safe queen as about the time he gave it to me kids came into the picture eating up my range time, plus I shoot lefty so right-hand pans flashing dead center of my face isn't the most pleasurable way to go!

I know little to nothing about the rifle:

What I'd like to know:
A big thanks in advance for any replies. 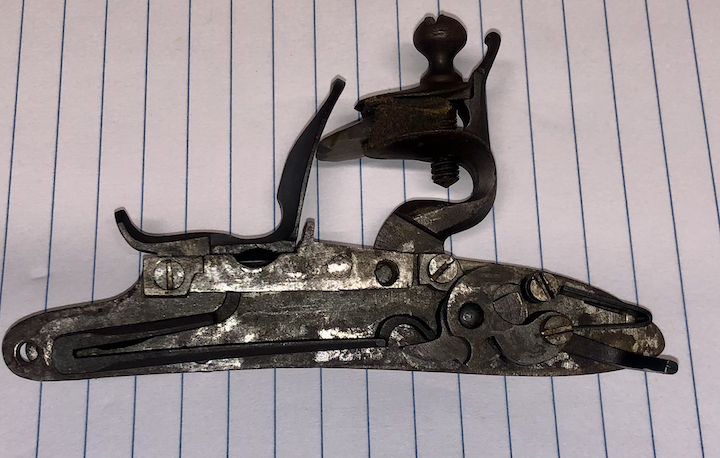 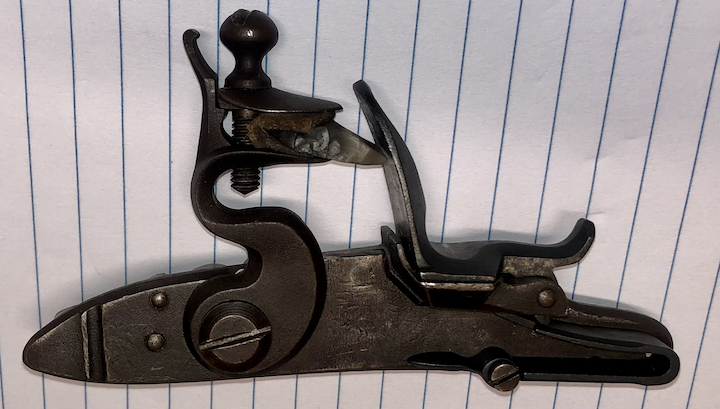 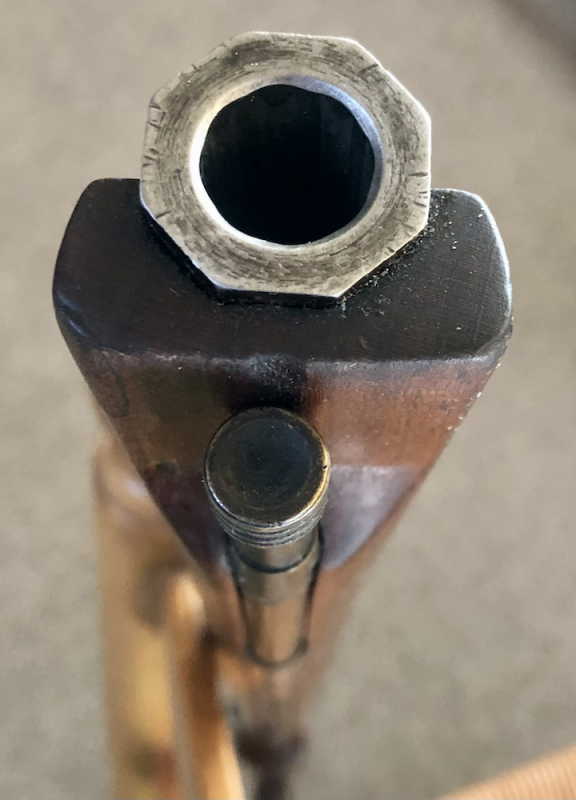 Bigger pics can be found here:

There's a Chimney Point, also a state park, in Vermont on Lake Champlain. I wonder if the builder might have been from that area or New York.
K

The lock is a Siler with the tail rounded. Looks to have a hand forged trigger guard. Possibly someone's idea of a southern mountain rifle from 70's 80's 90's? That's my guess. It's value is what someone is willing to pay.

Chimney Point Rifle Works was pretty much a one-man outfit run by Philip Quaglino. I believe it was based in New Hampshire. I'm sure he was most active in the early seventies, but I don't know exactly when the operation was founded or closed.

Phil surfaced in Florida in the 1990's and was instrumental in getting a local Cowboy Action group going in Fort White, Florida in 1999. I was the Territorial Governor of that club for the first several years of its existence. I got to know Phil pretty well at that time, although we were both all about Cowboy Action at the time. The last I heard, Phil Quaglino had moved to Havana (pronounced HAY-vana), Florida, and was shooting with the local muzzle loading bunch. I think they are called the Jefferson Longrifles, but I'm not sure of that.

Phil was a good gunsmith, and the one rifle and the one pistol I have seen that were made by him were very plain but well made. I recall the pistol was intended for target shooting. It had an octagonal barrel with the side flats milled down in thickness to lighten it. The rifle was very similar to yours, with that antler heel-cap, and the trigger guard made of one piece of strap. Phil told me once that he made at least some of his own barrels, from bar stock. I don't know that he made all of his own barrels, but he at least made some, and I believe they were well regarded.

The antler or bone heel cap, incidentally, is a fairly rare but authentic feature on some iron-mounted rifles of southern origin. I'm inclined to believe the practice was limited to one geographical area, although I don't know where it was. Maybe South Carolina, but I'm not sure. Phil was inspired by southern rifles when he designed the Chimney Point Long Rifle, although I don't think it was made as an exact copy of an original. Southern guns were just starting to get people's attention at the time he was making them. Even Green River Rifle Works offered a "Poor Boy" rifle. "SMRs" are common now, but they were kind of a new fad 45-50 years ago.

Chimney Point used to be a regular advertiser in Muzzle Blasts magazine in the seventies. I'll look through the back issues I have accessible and see what I can find.

In my opinion, some of these late 20th century muzzleloaders are collector's pieces in their own right, but that shouldn't stop you from shooting it! Mr. Quaglino's rifles were meant to be good quality, affordable shooters. The one you have looks to be in good shape, and should give you a lot of enjoyment.

It appears to have a hooded front sight. I would have expected to see a peep sight mounted on the tang. It may have been used for target shooting. @Notchy Bob has provided the details about the manufacturer.
R

Nice looking rifle, with a plain but elegantly shaped stock. I'd like to know more about the practice of using a piece of bone as a cap on the butt.
R

Bone was a common material on Southern Mountain and Appalachian rifles. Used both for decorative pieces and functional parts like toe plates and nose guards. That rifle looks to be very well made and looks like radius bored rifling.
F

Interesting rifle, has a lot of poor boy features to it with the elegance of a colonial styled rifle.

I’ve always been a fan of plain styled rifles, they tend to age much better than highly detailed rifles.
B

Thank you all for the responses, please keep them coming!

Pardon my ignorance, does the term iron-mounted refer to the trigger guard, escutcheons, and toeplate being made out of iron as compared to brass?

That's exactly what it means.

Thank your for your encouragement!

Mr. Quaglino would probably be well into his eighties now. I lost contact with him years ago. If you get in touch with someone from Jefferson Longrifles, they should be able to help you find more about him.


rchas said:
I'd like to know more about the practice of using a piece of bone as a cap on the butt.
Click to expand...

I don't know much about it, as I don't think rifles with this feature are common. However, there are a few. This rifle, known as "Boons Best Fren," is in the possession of the Kentucky Historical Society: 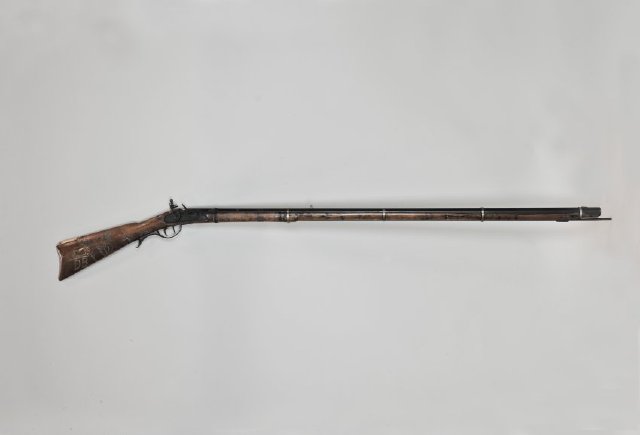 It was said at one time to have belonged to Daniel Boone. Experts, including the late John Bivins, have indicated the Boone connection is highly unlikely, but it is an interesting antique rifle nonetheless. It has a heel cap of bone: 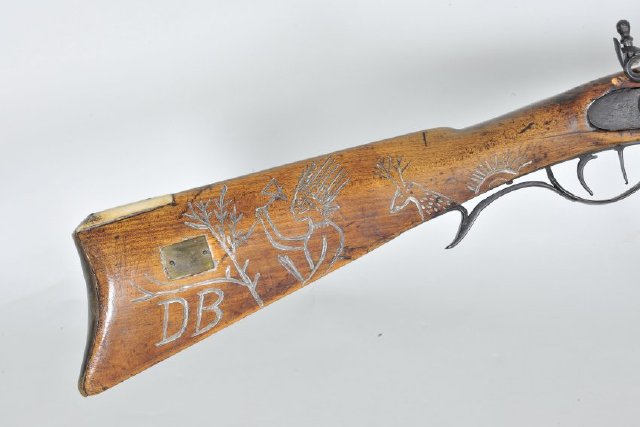 You can see more photos and read more about it on the KHS website: Boons Best Fren

This next rifle was built by Patrick Hoy of Spartanburg, SC, some time prior to 1825. It has a heel cap, buttplate, and toe plate all made of bone! 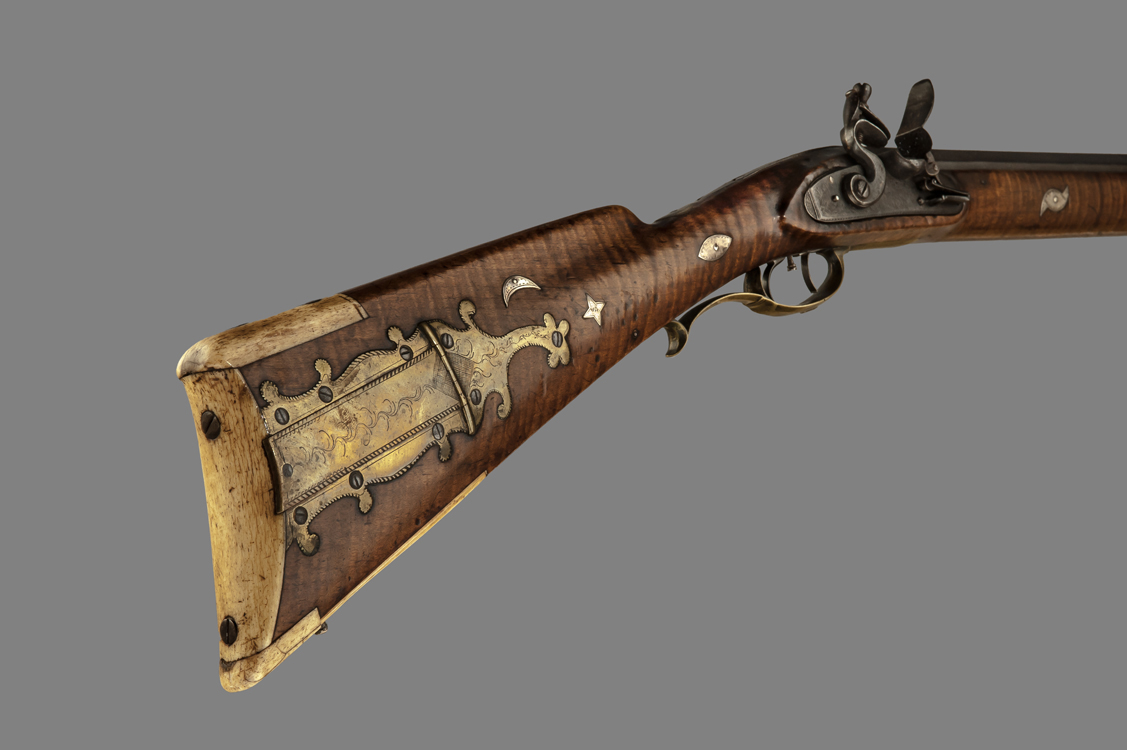 TVM is carrying on the tradition with their "Natchez Poor Boy" rifle, which has a bone heel cap:

I would agree with @Keb that the lock on the Chimney Point rifle is a Siler, modified by rounding the tail. The Siler lock is a Germanic style, with its faceted pan, and southern rifles are generally fitted with English or American "Warranted" locks, which normally have a rounded pan. The use of a Siler lock on a southern rifle is considered incorrect by most of us, but Mr. Quaglino did do some reshaping on the tail of the lock to make it a little less German. He didn't modify the pan. However, I recently found this old Virginia rifle displayed online. It has a lock with a faceted pan: 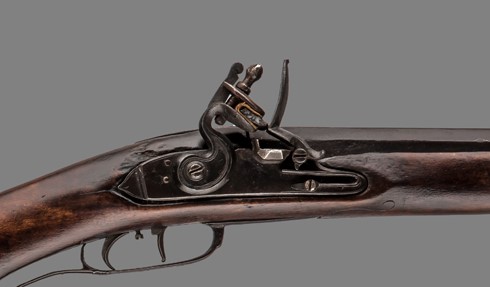 I wouldn't worry about it, in any event. You have a nice rifle.

This is why I love this site. First, that's a super nice rifle. Second, being far less knowledgeable than most folks here, I saw that lock and thought it might be some variation on a Jaeger lock, but your descriptions above show me my error.
Thanks

you have a very nice looking rifle, big bubba.
B

Phil Quaglino can be found on Facebook where he is fairly active.

Hi,
I believe Phil Quaglino was active in Vermont, hence the name "Chimney Point", which is an historic location on Lake Champlain. Several of my shooting friends have rifles by him. He may have moved to NH and then Florida but the Chimney Point refers originally to his time in Vermont.

Big Bubba Daddy said:
Thank you all for the responses, please keep them coming!

Pardon my ignorance, does the term iron-mounted refer to the trigger guard, escutcheons, and toeplate being made out of iron as compared to brass?
Click to expand...


dave_person said:
Hi,
I believe Phil Quaglino was active in Vermont, hence the name "Chimney Point", which is an historic location on Lake Champlain. Several of my shooting friends have rifles by him. He may have moved to NH and then Florida but the Chimney Point refers originally to his time in Vermont.

I appreciate the comments. @dave_person is probably right about Chimney Point Rifle Works being in Vermont, since that is the location of the historic site. However, I seem to remember Phil telling me he had lived in New Hampshire before moving to Florida. Could be wrong... I also think he may have continued building rifles with the Chimney Point name for at least a while even after moving to Florida. I'm pretty sure he lived in Mayo, Florida at one point, but he was living in Fort White when I knew him. I was told he moved to Havana after that. I didn't find him on Facebook, but I did find a listing in the WhitePages that would probably be him, either in Quincy or Havana, Florida. Both are little towns up in the Florida panhandle.

That rifle has a Strong "Carolina" Influence.
It looks a lot like a early 19th Century Gillespie "Mathew Gillespie" rifle. Matthew was know for his V-shaped fore stock on some of his rifles.
This feature was found on other, later Gillespie's as well.
Mathew worked a lot with with Cherry and Walnut.
Your rifle looks cherry to me..another reason it reminds me of a Gillespie.
Gillespies did use a unique trigger guard with the grip rail curling forward. Your rifle has a simpler strap type TG.
B

Sorry, if you want to find Phil on FB you have to search using his full name. Philip. He did move to Mayo Florida. He bought my family home there. He did have a barrel making business there also. He moved from there, but he also moved from all the other places mentioned. He is still in Florida though. Phil is the person who taught me the Proper aspects of gun building.
You must log in or register to reply here.
Share:
Facebook Twitter Reddit Pinterest Tumblr WhatsApp Email Link