Historically Incorrect, or (A Story of Thread Counting and Delrin Rods)

Grenadier, that sort of things wore out years ago, but will always have a military field jacket, good coat.

I've been shooting a side lock muzzle loader for a few decades, eg a TC 50cal Hawken I built from a kit in the mid 70's. A few years ago I took over Black Powder events at my club. Did not know a thing about woods walks or shoots but received a lot of coaching from shooters. The feedback is I have put together some nice shoots. Now I am starting to look at PC 18th century clothing as many of the shooters wear. Simple, nothing elaborate...albeit some of the shooters have some very nice outfits. Slowing but surely I will put a set of "duds" together as it will add to the fun I have participating and running Black Powder shoots.
I also recently (this past August) obtained a Lancaster style Flintlock which is now my primary smoke pole. I have a lot of fun shooting it.

It's all about having fun and a good time while being safe.
T

Your query about coffee beans just reminded me of the first time in the early 1980's, that one of guys in my unit was using an original recipe for coffee that called for boiling the whole beans in the pot. Now, everyone in my unit knew I drank coffee no matter how hot or humid it was, so they offered me the first cup to try. I looked at the pot and from under the lid was seeping out something that resembled the boiling mud flats in Yellowstone Park, I had seen years earlier.

I replied, "Is the only thing in that pot coffee beans and water?" When they replied yes, I put my tin cup down so they could pour me a cup. When I tasted it, My God it was the most horrible cup of coffee I had ever had and that included "Mid Watch Coffee" that you can stand a spoon upright in!! I almost gagged, which kept me from replying for a few seconds and then I slowly and carefully replied, " I think you might want to add some chicory to that the next time, though it's not the worst cup of coffee I've ever had." At that he poured himself and a few other brave souls a cup. It was all I could do to keep from laughing until they tasted it and began loud exclamations on how terrible it was. Even the guy who made it made some strange faces before he poured the cup out on the ground. From that time onward, he was known as "Chef Ptomaine," even though he did a good job of cooking lunch for everyone at all the events he participated in. LOL.

kje54 said:
I don't care if you're wearing a hula skirt and coconut bras when you go shooting. Might look a little weird but whatever floats your boat.
Click to expand...

Ha! That's a good one. I'd like to see that myself.

tenngun said:
I went to an 1812 event. The guy running it was a little hesitant to let me in. I was coming as a civilian gathering under the protection of the fort at the start of the war.
My working mans coat is a burgundy wool with short upright collar and hip length it sports revolutionary period buttons. The collar is about the only difference between it and a revolutionary working coat, and for that matter coats seen thirty years later.
‘Your buttons are wrong’ I’m told. I said back. I’m near sixty, I fought in the revolution, I ain’t rich. Missis is passed and I had to make my coat. Damned and go to hell for I would throw out good button cause their forty years old.
They let me in the event
Click to expand...

Many a men wore there Civil war uniforms or parts parts of them for years after the war.

RSbilliard said:
Many a men wore there Civil war uniforms or parts parts of them for years after the war.
Click to expand...

Same with WWI and to a lesser extent WWII. Those old uniforms were sometimes the only clothes an unemployed vet owned. Many of us still wear surplus cammo shirts and jackets for work and hunting.

Rifleman1776 said:
Same with WWI and to a lesser extent WWII. Those old uniforms were sometimes the only clothes an unemployed vet owned. Many of us still wear surplus cammo shirts and jackets for work and hunting.
Click to expand...

Yep. Still wear my USMC khaki cotton belt at times. It is a little amazing to me at times that when I have been boarding a SW Airlines flight wearing street clothes (while wearing just the belt) and have a flight attendant or pilot recognize the belt/buckle with a Semper Fi response ...

My only bit of a uniform I still have is the silk kerchief that I wore with my jumper, it still goes to events

Yes sir, I've had some ugly coffee in my tin cup now & then! I poured it inconspicuously on the ground behind a tree. Yuck! After a while, one knows who in camp makes a good cuppa & who does not. Have you ever grasped a pot of freshly boiled coffee & swung it in a circular motion to settle the grounds? Cold water works fairly well. Straining it through a bandana works better.

I have to confess though to bringing previously ground beans with me. I didn't need the first-hand experience of grinding hand-roasted beans with my musket butt or bayonet. I carried it in a hand-sewn canvas bag.

Ah, coffee & it's little challenges. I used to drink it by the pot, but spending time in Western Australia turned my taste toward black tea. It's been tea by the pot for the last decade or more. Still like coffee too, but tea is more predominant now.

Thanks for sharing the experiences! Sure is surprising what can occur just around that cuppa joe!

Can we get a ruling on bourbon?

Bourbon, since it kinda sorta should be distilled in Kentucky. But, whisky is good. George Washington's cash crop after he retired from the presidency was to distill whisky. I think the still has been rebuilt and the whisky is for sale at Mount Vernon. Its a bit pricey.

One of our earliest tax revolts to be addressed by the new USA Congress was the Whisky Rebellion.

Miller Lite and Makers pretty much does it for me.

Oops, thought I was on the new beer thread. Sorry about that.

Miller Lite and The McAllen. And a bit of the moonshine.

Bob McBride said:
Miller Lite and The McAllen. And a bit of the moonshine.
Click to expand...

Funny you say that... 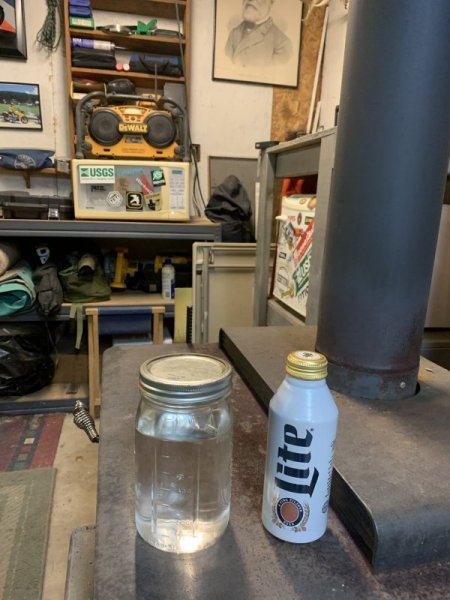 I swear trying to navigate this forum stuff is a pain on this new phone.
A

I would not let that jar sit there too long especially when there is a fire in the stove.

Nameless Hunter said:
The argument that your attire was "too old" was just being plain argumentative. I think it's VERY plausible that a 60+ year old male might still wear clothes he purchased when he was in his 30's (and especially 40's).
Click to expand...