George Bent (1843 - 1918) was a son of William Bent, one of the founders of Bent's Fort, and Owl Woman, a southern Cheyenne lady. George was well educated, having attended school in St. Louis. He became a Confederate soldier during the War Between the States, and saw action in Missouri and Arkansas. At some point he ended up in Union hands, and was made to swear an oath of allegiance to the United States before being released. He then returned to Colorado, which was pro-Union. For his own "safety," from pro-Union sympathizers, he went to live with his mother's people. He was present with Black Kettle's band at Sand Creek during the Chivington massacre, and he subsequently remained loyal to the Cheyennes and participated with them in many battles against the US Army through the 1860's.

George didn't simply live with the Cheyenne, he was Cheyenne, by virtue of their matrilineal kinship system and his mother's clan affiliation. He also married into the tribe. George was fluent bilingually, and often served as a trustworthy interpreter. Much later in life, he worked with several early anthropologists and ethnographers, most notably George E. Hyde, with whom he communicated in a series of long and very detailed letters. These letters were later edited by Savoie Lottinville and assembled into a book, Life of George Bent, From His Letters. In reading the book, I found this interesting passage, which I thought might be worth sharing with you fellows: 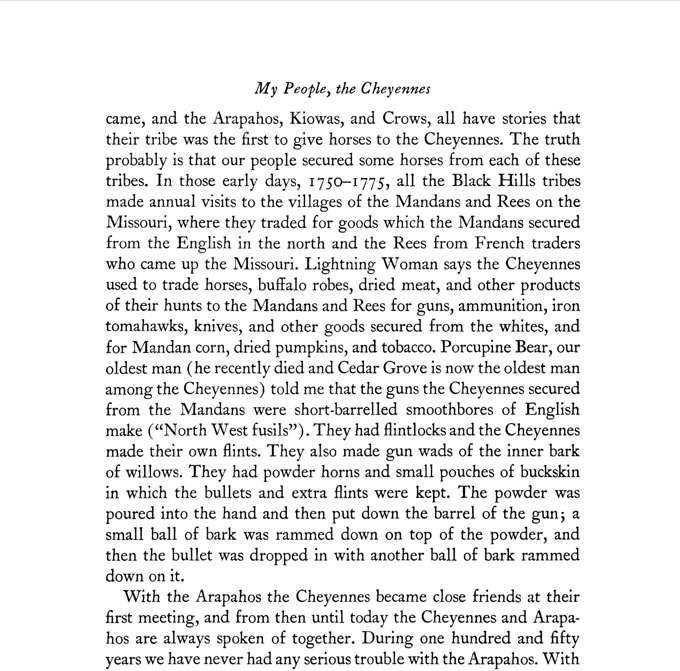 There is a lot of information here. This tells us about the diffusion of northern trade goods, including Northwest guns, to the southern tribes via existing native trade systems. Mr. Bent also tells us the Cheyennes "...made their own flints." This might seem obvious, as native American people were the original American flint knappers, but as a matter of fact many of the native tribesmen abandoned stone tools (and the skills to make them) at a very early date, and the traders in general were known to have sold gunflints by the thousands. However, the southern Cheyennes were capable of making their own.

This short passage also gives specific information about loading procedures. Sometimes, on forums such as this one, people will ask what Indians used for wadding. I had read in the works of George Emmons that the people of the Pacific Northwest (he wrote specifically about the Tlingit and Tahltan) used shredded bark, but Emmons didn't give much additional detail. George Bent tells us what was used by the southern Cheyennes ("...inner bark of willows...") and the loading procedure, with an over-powder wad and an over-shot (ball) wad. The Cheyennes knew not to pour powder down the barrel directly from the horn, and were evidently able to estimate the proper charge without benefit of a measure. Bent also specifically mentions powder horns and "small pouches of buckskin" for ammunition... No giant "possibles bags" for these fellows!

For me, finding something like this just makes my day.

Thanks for sharing that, Notchy.

George Bird Grinnell was also a friend of George Bent and interviewed him and other members of the tribe extensively for his book The Fighting Cheyennes.

Another book that covers the inter-tribal trade of European goods is Thundersticks by David J. Silverman. It's a bit PC like a lot of recent history books, but well researched.

Working stone for plains Indians was likely a lot like us using a framing hammer instead of a nail gun. One is better, but you still know how to use the other.

Working stone for plains Indians was likely a lot like us using a framing hammer instead of a nail gun. One is better, but you still know how to use the other.
Click to expand...

That's a nice analogy, with the framing hammer and the nail gun. We wonder if some of the tribesmen may have wanted to preserve old traditional technologies, just as we (on this forum) want to preserve the muzzleloading traditions and technologies of our own forefathers.

We do know that gunflints were a very common item of trade with the native people. We also know that just any old rock is not going to work as a gunflint, or an arrowhead, for that matter. I have read about high-quality stone (for knapping) being traded among the tribes in North America, even in pre-Columbian times, along the traditional trade routes mentioned by Phil Meek in his post (above), traveling to areas far distant from the places where the stone was gathered or quarried. It is my understanding that you have some very high quality stone in north Texas... Maybe relatively easy access to the raw material contributed to preserving the tradition.

In any event, your family's oral history and George Bent's narrative suggest that flint knapping skills were still being used for practical applications well into the 19th century.

What a story! Your Texas roots go deep.

Direct descendants on my fathers side (same last name all the way) got to Texas in 1832. There are some good stories. Rangers, cavalry officers, land speculators, horse thieves and doctors...we got it all.

Flint quarried in the Texas panhandle was traded all across North America starting about 12,000 years ago.

brazosland said:
Flint quarried in the Texas panhandle was traded all across North America starting about 12,000 years ago.

Yep... That's it! Also the Georgetown flint. I did not know the Alibates quarries were now a national monument. I would like to go there some day.