First off thank you for inviting me to the site!! I am getting this very old Blunderbuss from a close long time friend who got it from an estate sale some 15 years ago. It seems to still be in working order and from what I gather and not sure at all, 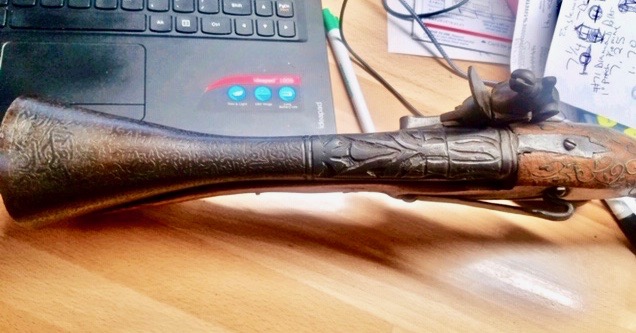 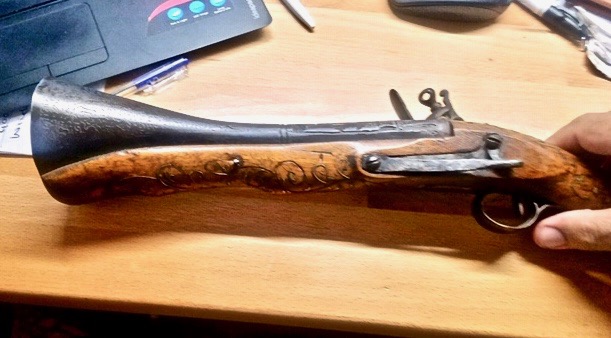 from the photos attached here it "could be" very early 1800's made by the East India Company based in England. I was told it originated over in India or places near there. I should be getting this in a week or two. My friend closely examined it and the inlays in the stock "seems" to be gold and he cannot see any identifying markings of any kind, and the flint and action is in excellent working order. He has not ever taken it apart or fired it and the barrel is not cracked or split. I do own gunsmith tools and not a pro in the field but know the basics and dos and don'ts and may see if any markings are under the barrel or lock plate.
Anyway I am searching for ANY information or guidance on this Blunderbuss that someone here may know or have. I do want to at least try it after I can closely inspect it for safety reasons. Thanks!!
R

Hi RicM. Welcome to the Forum.

The blunderbuss pistol you have is often referred to in collector circles as an Ottoman knee pistol. The - incorrect - thinking that the pistol was fired butted up against the shooter's knee while on horseback. This would be highly unlikely. The short, rifle style butt stock was more likely an idea copied from certain styles of early Spanish pistols.
While it is likely that this short style of blunderbuss was invented somewhere in Europe, it never really caught on.
However, it was extremely popular throughout most of the Regions throughout the Ottoman Empire, especially during the first half of the 19th Century. Many of these pistols, like yours are supplied with a sling bar on the left side of the stock allowing the gun to be carried cross-chest, like a sword baldric. These "knee" pistols were made at many gun shops in the various Balkan countries. But the photos you supplied make me think that yours may indeed be of India origin. The lock does not appear to be a genuine EIC lock. Appears more of a general European trade lock. Some more pics of the lock (inside and out if possible) and the pan and barrel relationship would be helpful. As well as some close-up pics of the barrel and muzzle details. The stock decoration remind me of Southern India, as well as the exaggerated muzzle.