I'm in the market for a Pedersoli Rocky Mountain Hawken. I had originally set my sights on a .54 with a 1 in 65 twist rate, but recently discovered they were also made with a 1 in 48" on a .50. I shoot patched round ball, can someone explain the difference and which is better for my style of shooting ?
M

First we need to know what is your style of shooting and what do you want to do with it? Hunting, paper punching, serious target shooting?


mooman76 said:
First we need to know what is your style of shooting and what do you want to do with it? Hunting, paper punching, serious target shooting?
Click to expand...

I would go with a 50 but with a slower twist than 1-48. The 54 would be good but kind of overkill for just target shooting. The larger the caliber, the less twist is needed to stabilize the ball. 1-48 with a 50, nothing wrong with it but is more limiting because it is a compromise twist. It can shoot conicals and RBs well but not the best. RBs don't need as much twist to stabilize and with conicals, the longer the conical is, the more twist it needs to stabilize. Maybe someone else can explain it better. There are actually allot of factors in play. If you can get a Muzzle loading book, they usually explain in great detail how it works.

1-48" was a rather common twist rate 230 years ago. As long as the rifling is deep enough to get a good grip on the prb it will shoot just fine. I prefer slower twist rates in any caliber over, at least, .40. But the .50 sounds good to me for a number of reasons.
G

If i had a choice, I would go with the .54 with the slower twist. The .54 is very accurate, and with loads in the 60-70 grain range it is not too much for target shooting.

The Pedersoli Rocky Mountain Hawken is only offered in 54 caliber. Its the Missouri River Hawken that is offered in both 45 and 50 caliber.

Pedersoli uses deep enough rifling that the 1 in 47 (Pedersoli's website description) is acceptable for round ball. The good aspect of the 1 in 47 twist is that good performance can be obtained with a modest powder charge.

hanshi said:
1-48" was a rather common twist rate 230 years ago. As long as the rifling is deep enough to get a good grip on the prb it will shoot just fine. I prefer slower twist rates in any caliber over, at least, .40. But the .50 sounds good to me for a number of reasons.
Click to expand...

Grenadier1758 said:
The Pedersoli Rocky Mountain Hawken is only offered in 54 caliber. Its the Missouri River Hawken that is offered in both 45 and 50 caliber.

Pedersoli uses deep enough rifling that the 1 in 47 (Pedersoli's website description) is acceptable for round ball. The good aspect of the 1 in 47 twist is that good performance can be obtained with a modest powder charge.
Click to expand...

These guys nailed it IMO. The depths and type of rifling is more important than twist once you’re into the slow twist range, 1 in 48 is relatively slow for a short projectile like the round ball. Yes, many like the 1 in 66 and less rates but for plinking and target work with a fifty 48” is slow enough. You’re not likely to chase magnum velocity in those pursuits and you don’t need it. I suspect that a fifty with round ball and 50-70 grains is just what you’re looking for.
G

If I was just going to target shoot, then PRB and a slow twist rate.

In the 1990's I shot my CVA Bobcat a lot which I think has a 1 in 48" twist. It shot PRB very, very well.
Hornady Great Plains Bullets were hard to load but very accurate.
Conical, (may have been a "ball-let") the one brand I tried, did not shoot well.
Sabots did not group well.

Shot a Hornady GPB out of a friend's 1:66 twist CVA, grouped horribly.
Last edited: Saturday at 10:59 AM

hanshi said:
1-48" was a rather common twist rate 230 years ago. As long as the rifling is deep enough to get a good grip on the prb it will shoot just fine.
Click to expand...

I agree with hanshi. The original Hawken shop apparently used a 1:48 twist for all of the calibers. If you think about it, people whose lives depended on their rifles were happy with a 1:48 twist, but today's hobbyists believe they need a slower rate. Go figure! I believe the depth and width of the grooves has as much to do with it as the rate of twist.

Conventional wisdom maintains that you don't need as much powder to stabilize the ball with a faster twist, and that you can use a larger powder charge, to get a higher velocity and greater kinetic energy, with a slower twist. However, Horace Kephart bought an original Hawken as "new old stock" from Albright's hardware store in St. Louis in 1894. This was a .52 caliber rifle, shooting a 217 grain ball. Kephart wrote that he had a 41 grain charger, and he tried incremental loads of 41, 82, 123, 164, and 205 grains. He wrote that fouling increased with the higher charges, "... but there was no sign of the bullet stripping." He appeared to prefer the 82 grain charge, stating that "... I would land in the 12-inch black of the German ring target when aiming at the top of the bull, unless there was a wind blowing. This was at 200 yards" (from "The Hawken Rifle," in Sporting Firearms and The Hawken Rifle, by Horace Kephart, originally published in 1912, reprinted 2004 by the Palladium Press, in "The Firearms Classic Library").

That may be more than you wanted to read. However, the 1:48 twist may be more "tolerant" than we modern folk like to think. With the right ball, patch, and powder charge, I'm willing to bet you'll do just fine.

May I ask this here ? Current "understanding" is that heavier bullets need a faster rate of twist.

Georgian Target shooters considered 1 in 30 " the most accurate. Forsyth A mid 19 c India based sportsman who's focus was on hunting Tigers advocated a 16 bore ball from a short barrel with wide grouves and prominent narrow lands best with one in 8 foot just suffice to spin a ball with a desired flat shooting hard hitting charge Even 1 in 12 foot pitch in some cases . & the Baker rifle had a pitch of 1 in 120 ". his thinking being it kept easier to load and was good enough for military purposes . Quite at varience with Kepart's findings . Not to decrie Keparts findings .

I would say the target shooters pitch if accurate was useless as a practical rifle & he admits as much in a few lines in a whole book written for Napolionic Vollunteers ( Sclopetaria ). Forsyth went to great lengths in testing and was never eaten by a Tiger nor succumbed to the array of tropical maladies he could have got in India ,Only to die at home on furlough of Colera ? . But not before he found the 500 Black Powder Express 'Small bores' Very handy for Indian sporting 'Griffs' ( 'The sporting rifle & its projectiles '& ' The highlands of Central India' ). I believe he was what we'd call a govt timber cruiser / estimator ) Baker was right and for Govt purposes it served well until the advent of the percussion two grouve Brunswick . A supieror rifle despite Hans Busk's condemnation of it in favour of the 1851 Minie & the 53 Enfield rifle . All very interesting stuff .
Rudyard
Last edited: Yesterday at 2:29 AM
M

Yes a heavier bullet needs a faster twist but and larger caliber needs less. A minie however is a whole nuther animal. The hollow bas throws the center of gravity off so doesn't need as much twist and the solid based maxi.
B

For target competition I use 1:48.

joesmoe3 said:
May I ask this here ? Current "understanding" is that heavier bullets need a faster rate of twist.

The rate of twist needed to stabilize a ball or bullet depends on the size of the bore and the length of the projectile.
Sir Alfred George Greenhill came up with a mathematical formula to figure out what rate was needed back in 1879 and it is known as "The Greenhill formula".
This formula predicts the slowest rate of twist that will work.

In its simple form, the rate of twist is calculated by multiplying the caliber times itself and then multiplying the answer by 150. Take this answer and divide it by the length of the bullet. The formula looks like this: (D² X 150)/L = Rate of twist. (Where D = the caliber and L = the length of the bullet).
This formula gives a ballpark type of an answer. That is, it is not exact and because it depends on the center of mass, bullets with long pointed noses or with hollow cavities in the base don't always need the rate of twist the formula indicates they should.

A number of people think part of the reason Minie bullets work with slower twists is due to the "shuttlecock" effect. The same effect that a Badminton shuttlecock has where most of the weight is well forward of the middle of the thing and that keeps it flying "nose first".
I don't know if the shuttlecock theory is right but it might enter into things. 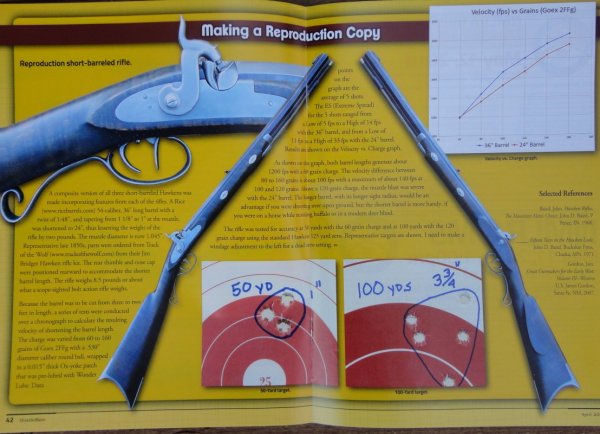 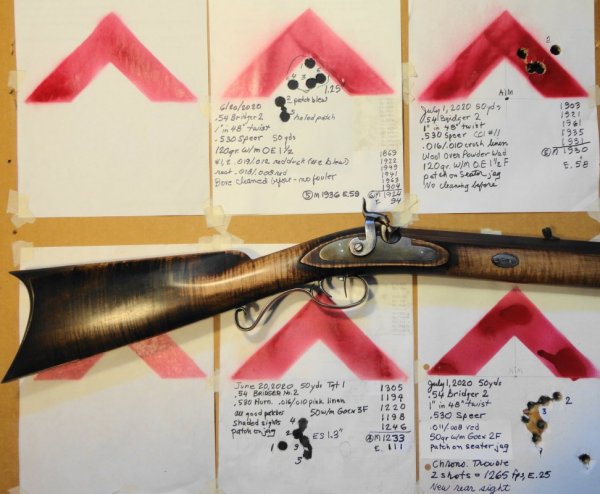