Has anyone rebuilt a muzzle loading gun that has been through a fire?

I have an early percussion English sporting rifle that went through a bad fire, the stock was gone, ash. The barrel is not warped, and does not seem to have burnt I have another gun the barrel is both warped and burnt, aka like if you get horseshoes too hot in a forge they scale and burn. My rifle barrel is just a blue colour now and not at all scaled. The lock will need repairing, springs reset, hardened and tempered, the tumbler and scear will need re hardening. cheers and thanks. I have a custom stock maker that will restock the old girl for me. 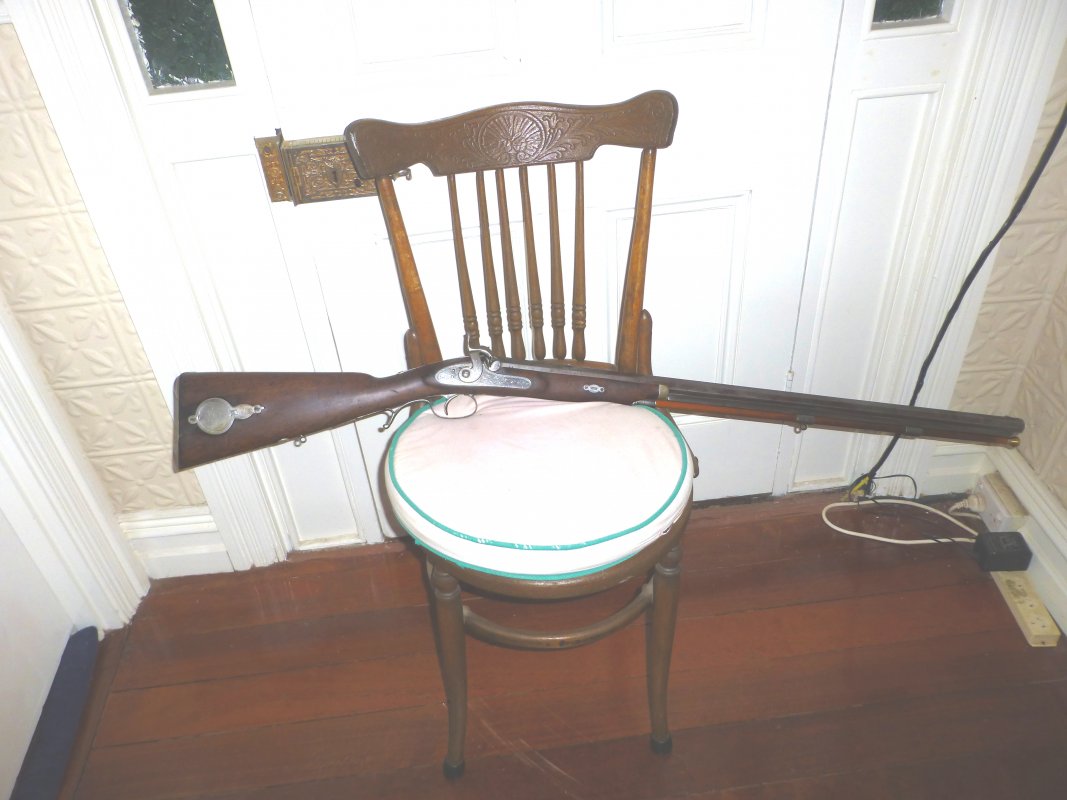 Dropped the parts off to the stock maker, he has a nice piece of English walnut, reckons he generally get 3 or 4 muzzle loaders a year. Seems to think like me, ( does a bit of gunsmithing) that the wrought iron barrel will likely be ok, but will still proof it before I shoulder it !

I have read Canadian Indians often removed wet charges, dry ball or things like cleaning tips stuck in the gun by tossing it in to a fire.
I would proof the barrel, but bet it will be fine.
H

My custom stock maker has made a great start on restocking my FBG, he is using fine English Walnut. I will have to improve the finish of the metal parts in due course. Will post again with more photos as they come to hand. He is currently inletting the cap box.

It has now been restocked in English walnut, will pick it up in November, will repair the fire damage to the lock and re proof the barrel. Will order a new sling for it from Track Click on photo for the whole rifle.

Is the lock likely to be similar enough to any modern things that you can buy parts and just put it together? I'm thinking springs and sear.

Once the lock and trigger are ready, you just need a lead sled, some bungie cords, and some string for the trigger.

Working on an original Lorentz that went through a house fire in a so-called ‘fireproof’ safe. Missing some the metal and it needs a stock……. Springs seen to have survived without losing temper. Not a priority at this time, so it sits.
H

The springs can be softened reshaped, hardened and tempered, the sear, tumbler and lock plate can be re case hardened. I will take the barrel off the rifle, and remove the cone, strap it to a heavy timber and let it off, that way I can make up a new barrel if the old one fails. The rifle is worth nothing now as a collectors piece, but is hopefully still a shooter.
A

The chances of an ordinary house fire permanently ruining a forged Iron barrel are very small, because the fire usually doesn't come close to reaching welding heat unless you store guns in the attic where the highest house fire temperatures are recorded. Yes it might scale up the bore some, but that is the same thing (and usually much less) that happens when barrels are initially welded. The bore may have to be reamed smooth and rifled again in a worst case scenario, but that is different than permanently ruining the barrel.

Gus that is what I am hoping will be the case.
A

Heelerau said:
Gus that is what I am hoping will be the case.
Click to expand...

Sounds like you have a good plan to proof it once again.

I want to make an important distinction on barrels going through a regular house fire, due to what the barrels are made from and of course what ammo is used afterward.

Many folks don't realize that Barrels are not "hard," because if they were, they would shatter in use. Instead they are made of "tough" materials that withstand the pressures of the ammo used in them.

Steel barrels withstand the pressures of either BP or modern cartridges by what types of Alloy they are made from. Some barrel steels are fine for the lower pressures of black powder, but are not of the correct alloy to withstand modern ammo. Fire heated STEEL barrels CAN become a danger to shoot after a house fire with modern ammo depending on how the heat affected the steel. Also, the thinner the steel barrel, the more likely it can be dangerously affected by a house fire. Personally and as a general rule, I would never again trust a modern steel shotgun barrel after it went through a house fire.

Forged Iron barrels have little or no carbon or other alloys in them. Thus the basic metallurgy of the metal doesn't change when the metal is heated and cools. This is why comparatively thick walled Iron Rifle barrels won't normally be harmed in a fire other than perhaps some scale formed in the bore.

Gus this is pretty much my reasoning to give this rifle a go. I will only proof it with he charge I would normally use. cheers Gordon
S

I once had a prominant M/L builder in our area tell Me in front of a room full of customers that Kit guns were JUNK. Of course his were Golden. He said to prove his point I was to triple charge and triple ball the rifle then fire it. the result was to be a biown barrel. his would be fine,though he would not demonstrate the the process on his rifle first.I told him he was an idiot and anyone following his advice would be an IDIOT too. WE have newbies listening to our advice everyday. Our info should be correct and safe.Most of the showroom crowd left when I did. I understand he was in the business to sell his guns : BUT at what cost. .........Be Safe >>>>>>>>>Wally

I'm following your thread. I'm keeping my fingers crossed for you that she will still group well. That rifle has a great story now. Very figuratively speaking you have brought it back from the dead. A Phoenix if you will. That could make a good patchbox engraving to accompany that story.

How much would something like this cost? I have one or two old guns that are in great shape except the wood has mold or is severely damaged
H

My bloke, including supplying the English Walnut charged me $1500 AU for the job.
2

i think i would have proofed it before paying for the stock?? guess you should proof it out of the stock so you can reuse the stock if proofing goes badly.you can always replace the barrel
H

I picked her up last week, just getting ready to bring her back on the plane to SA, next trip back. Will sort out the lock next. I have to get a replacement ball mould, .71 and they seem to be hard to get at the moment, last one I bought from Track of the Wolf, just a bag mould, but fine for this rifle. Will also have to re proof the barrel, but won't do than till I am able to cast ball for her 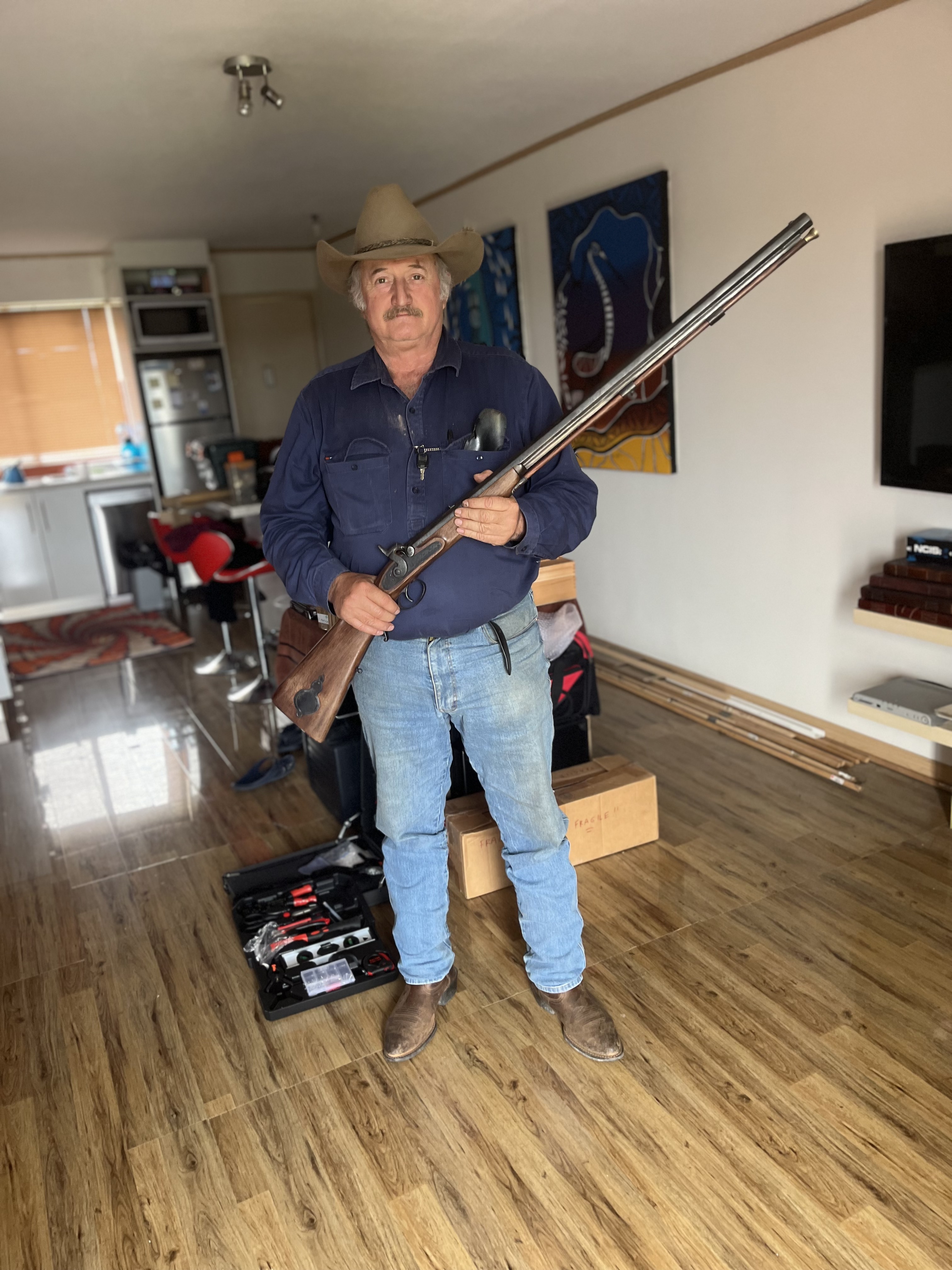 That is the plan, just the way things worked out, will proof the barrel out of the stock, I am 95% sure it will be ok. She hold well again, there is still some tension in the springs, but not enough.

Oct 18, 2022
Chris In SE PA
C
R
An American Percussion Long Rifle That Has Been In My Family for Many Generations Possibly by John Hinds
2 3

Problems I have had with, and thoughts on Pedersolis I have owned .
5 6 7

Problems I have had with, and thoughts on Pedersolis I have owned .