I figured I might post a couple of pictures of one of my most reliable castle defense or siege arms. 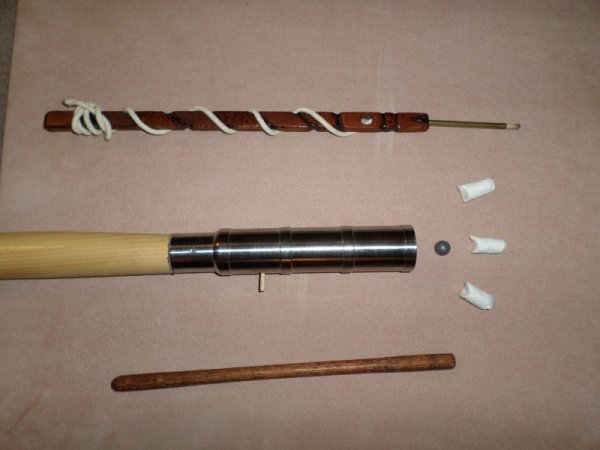 Top linstock is a snakes head with brass snuffer. Middle .50 caliber Handgonne with paper cartridges missing is leather lined silk bag. Bottom is the drivel rounded at one end and dimpled at the other. 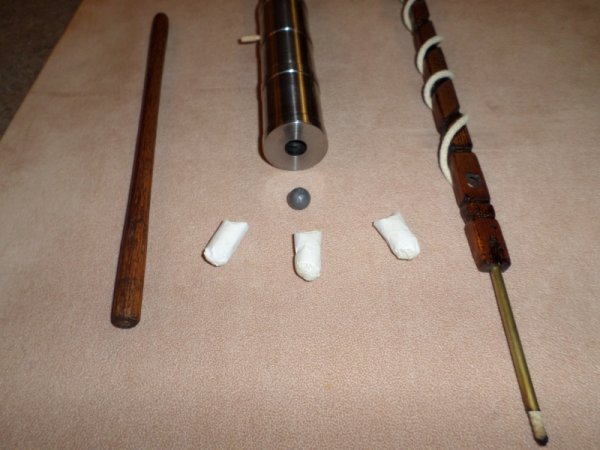 Anyone else care to share images of their linstocks or even just a bunch of drivel?
Last edited: Dec 6, 2018

Oooooouuuuuch, that's gonna hurt! Then again, couldn't be too much worse than hot lead poured down on ya me thinks!
P

I don't think you're going to blow That barrel up, Cpl!!

Never made a Hand Gonne yet, so never needed these bits, apart from a rammer that is.
You have inspired me to make one. Quick and ugly that is! I'll see what I can find in my scrap pile......

Pukka Bundook said:
You have inspired me to make one. Quick and ugly that is!
Click to expand...

To the OP, love the linstock! Embarrassed to admit never heard the drovel term before, even claim to own a few books on early arms too!
J

what the heck is a drivel?
P

Jax, As far as I know it was always what people spoke when they didn't know anything.

A drival spelled with an 'a' is what the short ramrod is called but if you look it up the definition still comes up as the same as drivel as defined by what Pukka Bundook noted. There is not a lot of information that survives historically on these items. I just like the play on words.

I did not make the handgonne myself but purchased it from someone who machined it from 1018 steel. I can't really tell if the person I bought it from was the machinist who made it or not, but they would at least be close to the person that did.

I just quickly whipped up accessories for it. The tiller is just an ash tool handle which I will carve later into a more interesting shape; it is mounted inside the breech end and a leather ring has been inserted there for recoil absorption. The cartridges are 35 grains of fffg with a .490 round ball. I have not had a chance to really try this yet but when I do I will try to let everyone know how it went.

The linstock was loosely based on the alligator and dragon head linstocks found on the shipwreck of the Mary Rose which was Henry VIII of England's Flagship. The match cord is Dixie Gunworks match cord made for Japanese matchlocks. The cord goes through a hole near the snake neck up the center and out a brass tube protruding through the snake's mouth. Just pull the cord back in about and inch or more and cover tip with thumb or finger to extinguish the coaling tip of cord.

I do however want to try my hand at bronze casting a small handgonne in the future.

When using the lesser strength material I would think more historically correct loading procedure should be followed only. This would be rammed powder followed by loose ball and the then held in by a wad on top. Patched ball would not have been used commonly. Prime or fuse touchhole and fire.

Fuses can be made with wet sugar, black powder, and broom straw, or the conventional Chinese manner by rolling black powder into damp twisted strips of rice paper.

Heck, I might even try a squirrel hunt with some shot with this thing someday.
J

Here is a website that shows some of the accessories with the spelling of the word for the ramrod. I am not sure if he is still operating his business or not, but it does have important information and links to various related subjects.

If making the broom straw fuse as described above it is probably not advisable to use wet sugar as the adhesive.

Instead, use a small amount of white glue or glue from a glue stick on the pieces of straw and before it dries put them in a tray or container with a small amount of fine black powder. Take them out and let dry.

The powder will adhere to the sprigs of straw and when lit from one end, it will behave like a fuse.

I have tested this previously and it works decently as a fuse.

I would be a bit concerned the residue left by a sugar paste adhesive because of the potential for caramelization messing up the touchhole.