Guns of Illinois/Indiana/Kentucky in the Early-Mid 19th century

I am researching my family’s move to the United States from England in the 1830’s. The first brothers came from England via Louisiana, and traveled up to Southern Illinois. I’m really curious as to what firearms my ancestors would have likely used as they settled into life in the US. I’m sure there are a hundred different ways this could go, and no way of knowing for sure.

Good luck with your research! As you said, "...there are a hundred ways this could go..."

We do know there were a number of gunsmiths active in Missouri and Illinois by the 1830's. Curtis Johnson wrote two volumes about gunsmiths of Ilinois, and Victor Paul and James Whisker each wrote books about gunsmiths of early Missouri. The Hawken shop was active by then, in St. Louis, but not everybody carried a Hawken. Another very famous gunsmith of that day was Phillip Creamer, who lived and worked in both Missouri and Illinois, at various times.

We also know a great many immigrants to the early midwest brought guns from home.

So, your ancestors may have brought guns from England, if they were people of some means. If they were less affluent, they may have bought arms in one of the outfitting centers like New Orleans, Natchez, or St. Louis on their way upriver, or they may have traveled all the way to Illinois unarmed, and then bought guns made locally. If they participated in the Indian wars of that period, by joining a militia, they may have been issued military muskets. There were a number of Illinois volunteers in the Black Hawk War, for example. There was a thread on this forum about the guns used in that conflict: 1832 black hawk war weapons

Hard to say, though. It is an interesting question.

Guns from the mid 1800's starting from 1820 to 1830 would either have been percussion , or flint , left over from an earlier year. Both were used then. They were made all along the Ohio river towns including Pittsburgh, Pa. . Pittsburgh had a very robust gun industry , because it was still an active jumping off place to all the states touched by the Ohio River system. Since most big game was gone , smaller calibers were in use for small game , and public shooting matches were in vogue as society searched for entertainment. I once restored a family heirloom percussion rifle from Southern Illinois. The 43" barrel , was a blacksmith made one , that came in the stock with the tapered 1 1/16 end at the muzzle , and the threaded end , 1" at the breech plug . Evidence showed from the underside of the barrel that the barrel had been swapped end for end at least once. A rear sight dovetail from the original manufacture was filled by a dovetail blank. The plain maple stock had to be replaced , due to it's poor condition . The lock was a back action percussion , employing a drum and nipple , and the rest of the parts were typical of a gun from Southern Appalachia , or any of the Ohio River towns along the way. The 1971 owner of the gun said his family migrated from Kentucky to Southern Ill. sometime before the Civil war. We had the rifle rebored to .45 cal. . Had a call from one of the 1971 owners son , in the late 1980's , and he informed me the family still shoots the rifle often , and the rifle is presently in Texas. I made a couple copies of this gun in squirrel calibers , over the years..........oldwood

As above you’ve lots of options. Regional guns were made, like Ohio, SMR, Missouri plains guns, but most states exported arms. A guy in Texas could well carry a Ohio or Connecticut gun.
In Arrowrock Missouri there was a maker named Sykes. His guns have been found in Oregon and Texas.
A plain Fowling gun might have been brought over from England.
In New Orleans they would have had access to American rifles, Spanish and Mexican guns, or old French guns.
Flint would still be shot pretty actively up to breechloading days. However the change over to percussion was pretty quick. And even old guns were converted.
Rifles .50 and over were rare unless one was heading in to the west beyond the pale.
Smoothbores were mostly below sixteen bore mostly below twenty.
Full stock like flint would be seen for years to come. Appalachia rifles remained full stock till the eve of the second world war.
However half stock was common.
We think of Southern Mountain rifles as being iron mounted, but silver and brass are well known in this style.
Silver was never the go to mount, but was not unseen out of the east and west.
My guess, just based on where they landed and where heading would be a half stock, on good maple, brass mounted .45, or .40 or so, barrel about a yard, fairly fat, an inch or more, single trigger, British made lock, metal engraved but wood plain, cap box in the stock, maybe a silver box or inlay in cheek plate.
Check plate beaver tail style and not German style
That said it could just as easy be a French TFC converted to percussion 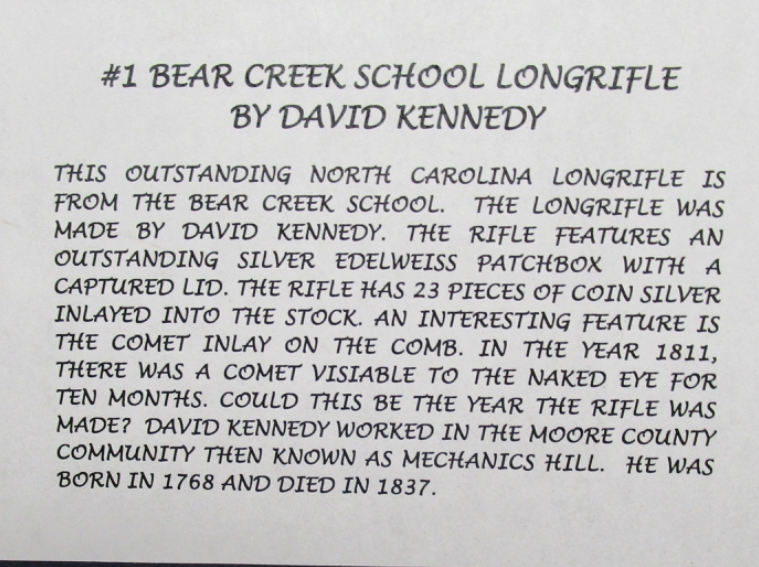 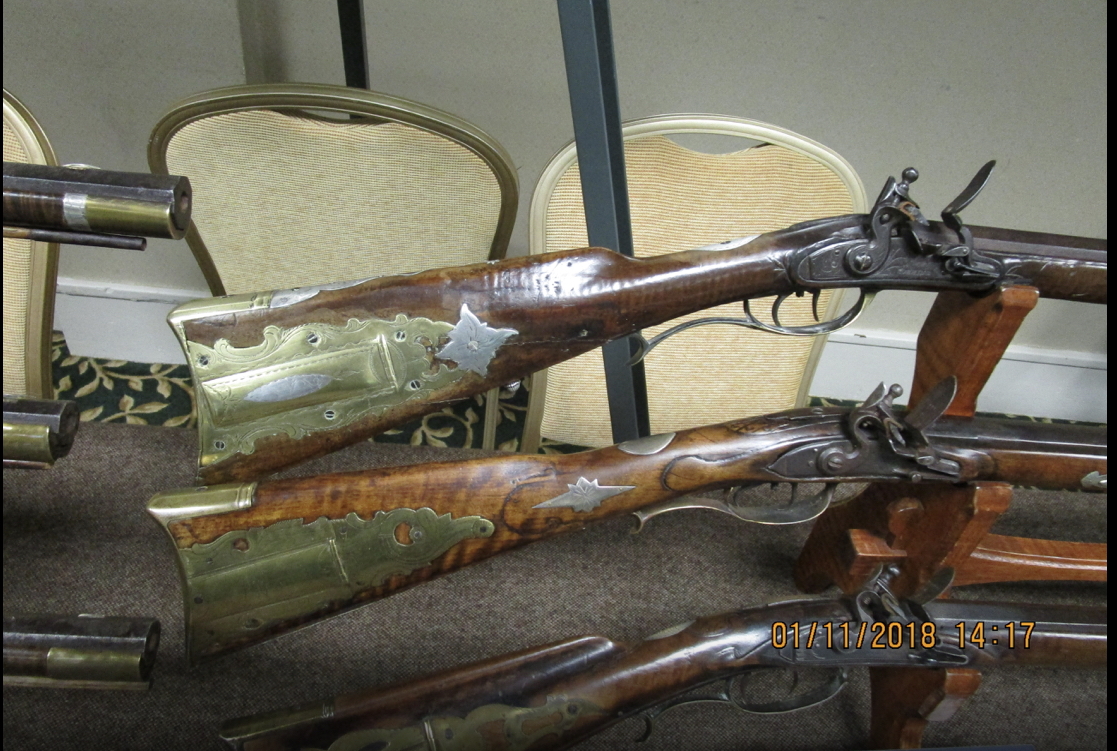 Some of my favorites….

Just to review, we are discussing emigrants from Britain, who came up the Mississippi from Louisiana to Illinois in the 1830's.

I hope some of our forum members from Britain will offer some comments, but until they do, I would suggest a couple of ideas. Happy, contented people tend to not leave their homes, unless they can afford to travel for recreation. This suggests to me that the British immigrants in question left because they were hoping to find something better. I don't think ordinary people in England had many guns, so I doubt they brought arms with them. I'm going on the assumption that these were people of limited means, and if they had guns, they probably obtained plain, functional arms after they got here.

Illinois went through a sort of population boom in the 1830's and 1840's. Leaders in the territory were hoping to achieve statehood, and they were recruiting settlers because the Northwest Ordinance required a population of 60,000 for a territory to become a state, and Illinois didn't have that many people. Land was cheap, which would have attracted would-be farmers who wanted a fresh start.

A lot of members on this forum believe smoothbores are more versatile than rifles, and were therefore popular on the frontier. It's hard to argue with that, but is there documentation? Washington Irving documented the American preference for the rifle in A Tour On the Prairies, and W.N. Blane, who traveled the American frontier in 1822 and 1823, had this to say: 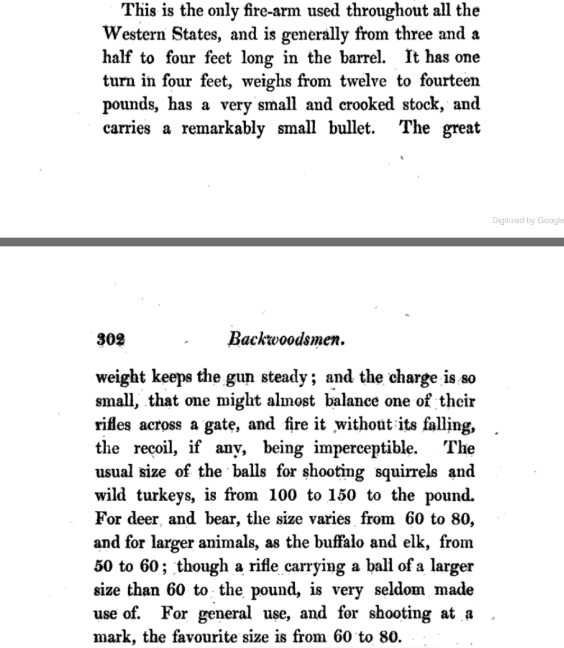 Twenty-odd years later, Granville Stuart suggested similar rifles were still in use on the Illinois and Iowa frontiers: 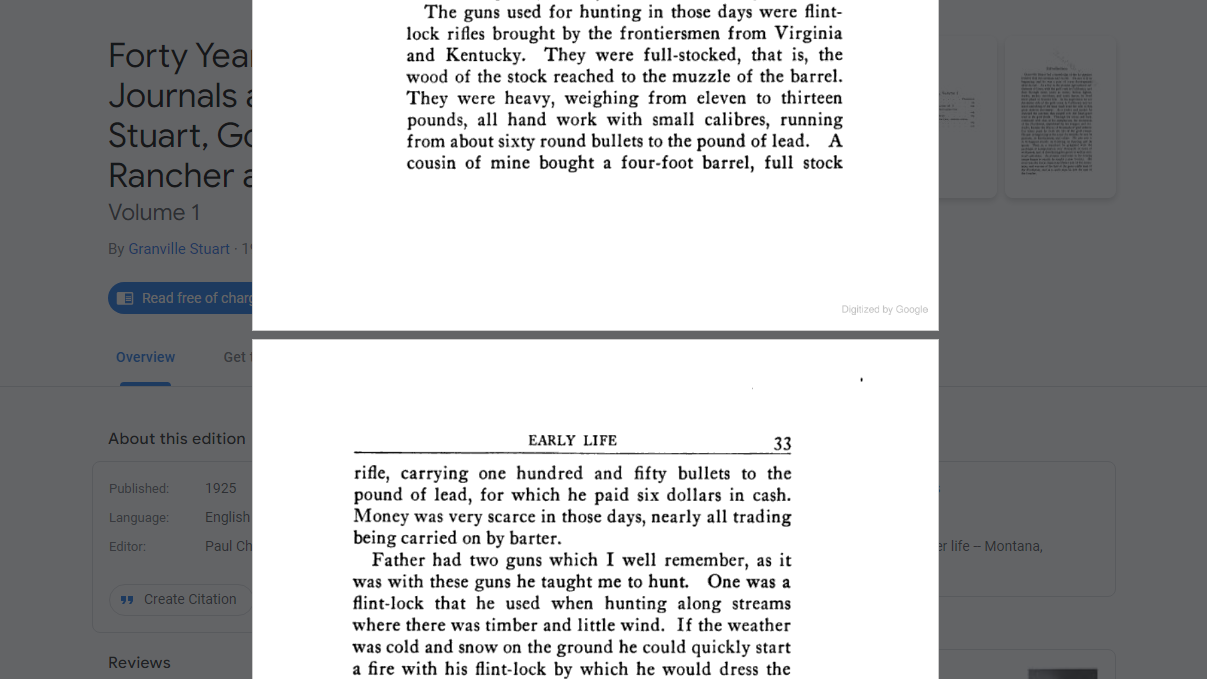 Stuart was familiar with percussion rifles, and one of his father's two rifles was percussion.

Regarding caliber, or bore size, this was typically expressed, as above, in balls or bullets to the pound of lead. Stuart mentioned a neighbor who had a rifle "...of large caliber for those days, using forty round balls to the pound of lead" (Forty Years on the Frontier, p. 33). A round ball of forty to the pound would measure .488", so this would be roughly a .50 caliber rifle. Blane indicated that rifles of fifty or sixty round balls to the pound (.453" and .427", respectively) were considered adequate for buffalo and elk. He said that for general use, the favorite size was 60 (.427") to 80 (.388").

Stuart reported that the "rifle of large caliber" mentioned above was half-stocked, but he added that this was the first half-stocked rifle he had ever seen. So, half-stocks existed on the frontier in the 1830's and 1840's, but they would not have been common.

Many things are possible. There was a lot of colonial French influence in Illinois, so the subjects of this thread may have gotten their hands on an old trade fusil. Rifles were carried and traded, and I suppose one of the British immigrants might have spent six or eight months worth of his earnings for a silver-mounted rifle from Carolina. Stuart reported the presence of a half-stocked rifle, and there is the famous 1834 George Catlin portrait of Henry Dodge, in Kansas, holding a half-stocked rifle. However, it may be more productive to focus on what would have been likely, rather than what would have been possible. We are all entitled to an opinion, but based on the information the OP has provided, and a review of some of the literature, I think a fairly plain, full-stocked longrifle of .40 to .45 caliber, or possibly up to .50, flintlock or percussion, either brought in from one of the southern states or made locally in Illinois or Missouri, might be a likely choice.

Splitear, If you're around the area, in the past there's been a pretty good collection of period pieces at the Tippecanoe battleground museum north of Lafayette, Indiana. I went there about seven or so years ago.

nkbj said:
Splitear, If you're around the area, in the past there's been a pretty good collection of period pieces at the Tippecanoe battleground museum north of Lafayette, Indiana. I went there about seven or so years ago.
Click to expand...

Unfortunately, I'm not around home any longer around home, but that Tippecanoe museum would be a great visit.

I really appreciate the information everyone, it's very insightful. I know there's no way to know for sure unless a photo or record comes to light, but it's an interesting question to me. My family was probably of middling means, they ran a store in a small village in Buckinghamshire, and 5 of the brothers came over together. They settled near Ellery, Illinois, and I'm assuming they were for the most part farmers early on. As time went on, the some of the family moved away from farming and took jobs locally. In my home county of Edwards, there are still 5 distinct Bunting families, and though we're all loosely related, most all of the families are separate from each other. I know that my Great-Great-Great Grandfather served in the Union army during the Civil War. It's interesting to think about what their lives were like, and what it would be like to say goodbye to your parents for the last time as you departed for a new continent.

A
Hello from Georgia
2

Sep 9, 2022
Heelerau
H
B
This is from the Colorado State Muzzle Loading Association [cont]