Falconer said:
Just got back from out of town. I have not had a chance to count the lands and grooves but the serial number would put it in the range of a Douglas barrel. The photo is one I found on the Internet but mine looks exactly like it...Thank You to everyone who contributed! You've educated me a little better and that's always a good thing!! The photos of the paperwork were especially helpful.
Click to expand...

GRRW went through a fairly steep learning curve from 1972 to about 1977. They made a number of changes in their guns over that period, steadily improving the quality and the historical accuracy of their models. Greg Roberts and Phil Sanders were key in driving this steady improvement, but many other employees contributed. By the time that Herb was taking the gun making class and building his Leman Trade Rifle, they had hit their stride and were producing the best available anywhere.

Below is my recreation of the 1977 catalog picture that Herb posted. These are their standard offerings after 1976 and constitute the basic GRRW collection. 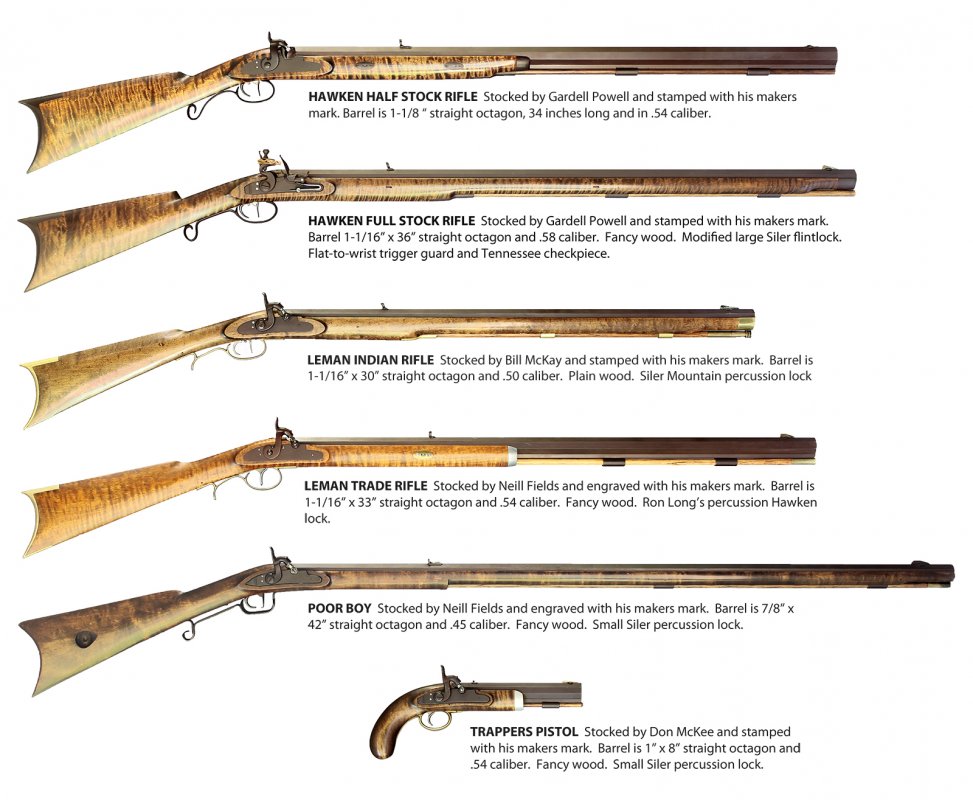 Back in the day a GRRW made rifle was a highly sought after rifle, in a close tie to Sharon.
At that price and condition of the rifle in the pictures, and you've got a great rifle.
Stock up on lead, those 570 round balls go thru it pretty fast.

You want to know more about your rifle, ask Doc White. GRRW is gone, but Doc's still there. Try this link:
http://whitemuzzleloading.com/ My own battered ol' GRRW Leman Indian Trade Rifle is a .50 cal named Lucretia. She's been winning rifle frolics and making meat since the mid-70's for me. Her barrel is a Douglas Premium and she only likes patched round ball.

.
Those that don't know Phil Meek, you need to pay attention to his remarks or suggestions. Phil is a fun guy that has as much knowledge about GRRW as anyone, he talks to Doc White, Carl Walker and Ron Paul from time to time and is thought highly of by these old former custom gunsmiths of GRRW.

In 2017 we started production (no inventory) of the same guns built by GRRW using four of the original gunsmiths building these models again. This was just an idea between Ron Paul and myself passing emails back and forth in 2016. This grew into contacting Doc White and with his approval Green River Rifle Works Collectors Association opened for business Jan. 2017. The first gun produced was the same gun produced at GRRW and by the same smith - Carl Walker.

As of Dec. 2020 just 4 years since opening we have built 68 rifles and a few pistols, all are look alikes to the originals of GRRW. The amazing part of this operation is these four gentlemen are not young chickens, ranging in ages from early 70's to early 80's and haven't lost their gun making skills (in some cases have improved). This has been a fun project that I have enjoyed as much as the gunsmiths being the contact person for the business.

With Phil's help we are looking at building our first reproduction H. E. Leman "Little Leman" or "Leman Squirrel" rifle. Phil has an original from the 1850's that he is providing the correct measurements of this scaled down rifle that's a sweet little gun. Carl Walker will build the first one in the spring of 2021 once he has a full size Leman finished that's on his bench now. Like our first Leman that Carl built I was given the honors of paying for it (some ideas are costly), the same will happen with this new 7/8 size H. E. Leman half stock. Fun Stuff
.
B

I was one of three GRRW dealers in Northern Colorado, we sold, traded for and bought GRRW guns weekly (used guns were great money makers and sold fast). I don't know why some buy anything as the don't take care of it back in the early years of GRRW. A GRRW gun would come in looking a little hard for wear, an employee of ours was a good touch-up man and turned a hard looking gun into something that we all looked at as maybe owning. Fun times with GRRW and their employees.
.
M

I own 3 GRRW Leman, 2 in .54 late models and a Little Leman in .45. I love the way a Leman handles and points. This has been a great post, lots of knowledge shared here. Thanks Gentlemen
Mike T

What a great thread! During the years GRRW was in operation, I was rather "out of pocket," and could not afford any of their firearms. I did buy some of their Leman parts, intending to build one myself, but that never happened, either. I eventually sold the parts I had just a couple of years ago to a gentleman who knew and understood what they were. I also ordered and owned most of the brochures which were pictured in this thread, but these were sadly lost in a move about thirty years ago.

This has been enjoyable reading, though! Thanks to all who contributed!

I own 4 GRRW guns 2 Leman and 2 Hawken. One Leman is in 54 caliber and a full stock. The other leman is 50 caliber and has a brass patchbox in it which I was told by Phil was rare. Not many of there guns were ordered with that patchbox. I also have 2 Hawkens a 50 and a 58. Three of my guns were built by Gardell Powell and the serial numbers are close together. I have all of mine because of being acquainted with Phil. Not only is he the reason but also has helped me located all of them. I also enjoy shooting with Phil and we have gotten together quite often to do that. His knowledge of these guns and other Blackpowder guns in general is tremendous. I always enjoy the shooting and the knowledge he shares during and after.
B

.
I had a little time to update the website for GRRW Collectors Association, biggest change is the parts cost (been working with several of our suppliers for 2021).

I just sold TOTW several of my personal GRRW.CA firearms, should be on their website with in a week or so.

A NW Trade gun that's interesting because of it's caliber/gauge, it's a .50 caliber smoothbore copied from an original that floated around the Denver museums back in the 1970's. Hanson thought it was a special order gun for either a child or woman built in the mid 1850's. * Built by GRRW.CA custom gunsmith Doc White. New/unfired ... nice smoothbore.

The other is a H.E. Leman Trade Rifle in .50 caliber. * Built by GRRW.CA custom gunsmith Les Bennett. New/unfired ... nice rifle.

I seem to recall an Adelaide South Australia connection .of GRRW ? Rudyard.
B

.
That started with former GRRW gunsmith Neil Fields moving from Roosevelt Utah after GRRW was closed and going to work down there. Long story from what Neil says....

You're right, Buck, but that is just part of the story. 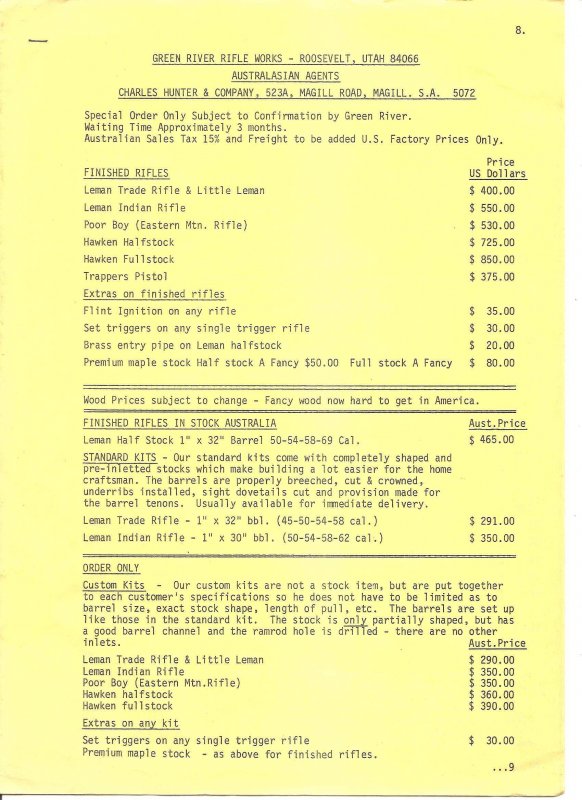 Another person that worked at Charles Hunter & Company and received some gun building training from Neil was Alan Vaisham.

After GRRW of Roosevelt, Utah went bankrupt in 1980, Mal Wade adopted the name for his company in Australia in about 1982.

Alan Vaisham took over Green River Rifle Works of Australia in 1984/85 and continued to operate it until he retired and closed the shop in 2016. 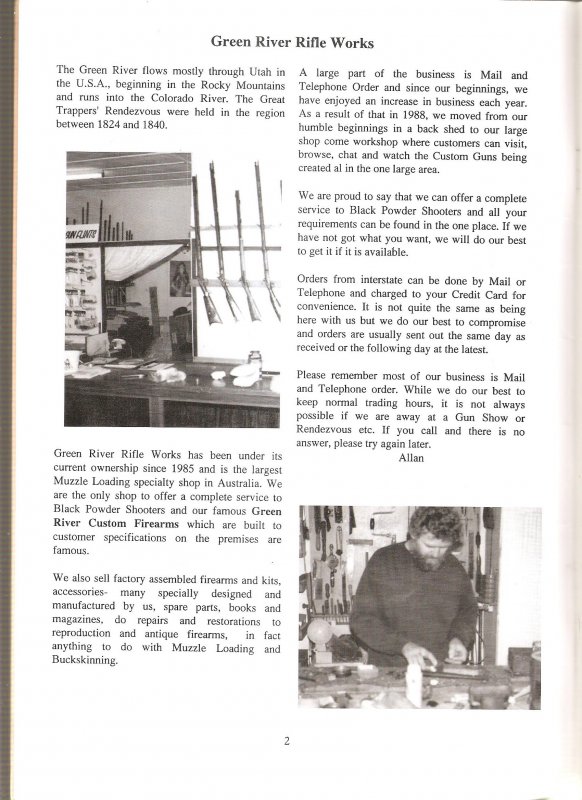 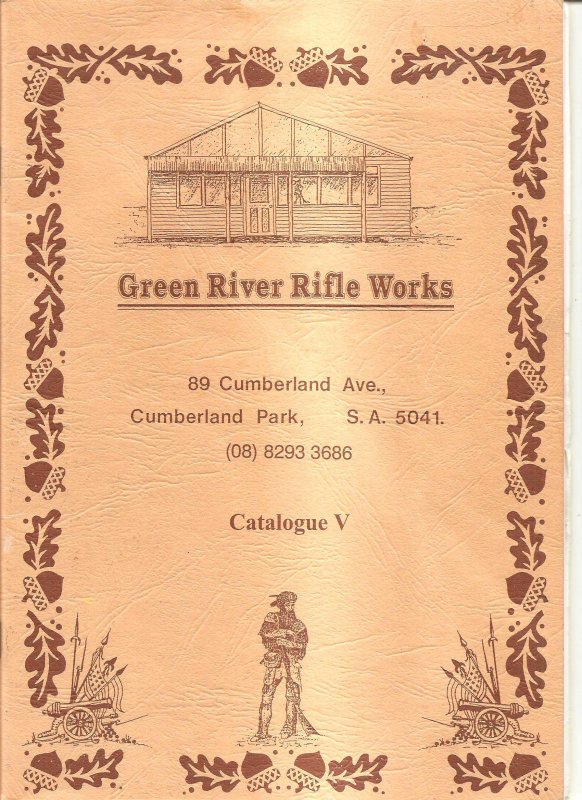 Hi Phil
It looks like the Australian rifles listed by Charles Hunter & Co were twice the price of the rifles sold just a few years earlier, in Utah. Over $2000 in today's money.

If so, why such an increase? Production costs?

The second half of the 1970s were part of the years of "stagflation". The Arab oil embargo in 1973 triggered a steady increase in oil prices that rose from $3.00 or $3.50 per barrel in the early 70s to $41 per barrel in 1981. This and the hangover of the government spending on the Vietnam War and LBJ's "War on Poverty" caused a series of recessions and double digit inflation.

It also appears that labor costs went up faster than material costs because the finished rifles increased at a faster rate than the kits. 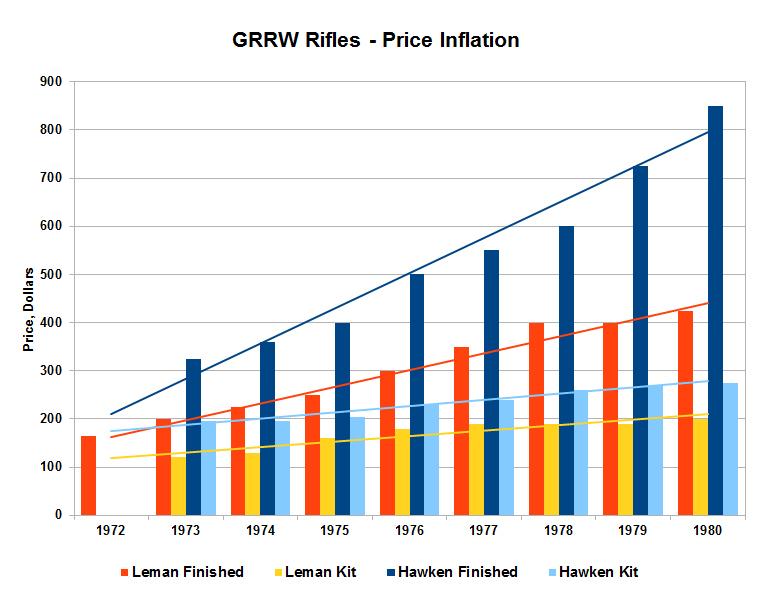 Thanks Phil!
Great research and information.

plmeek said:
You're right, Buck, but that is just part of the story.

Another person that worked at Charles Hunter & Company and received some gun building training from Neil was Alan Vaisham.

After GRRW of Roosevelt, Utah went bankrupt in 1980, Mal Wade adopted the name for his company in Australia in about 1982.

Alan Vaisham took over Green River Rifle Works of Australia in 1984/85 and continued to operate it until he retired and closed the shop in 2016.

.
Wade kept us informed thinking we would want to handle his wares because we were dealers for GRRW. McCormick (Cache La Poudre Rifleworks) about lost it when he saw the new prices like mentioned. Surprising they last as long as they did with their pricing schedule. The price inflation killed everyone around.