I have several of these Green River knives made by Russel Harrington in Southbridge MA. These particular knives were in my uncles home and were left to me when he passed. I'm trying to date them.
The one with the string wrap I remember as a kid on the farm. It has a tapered full tang so I'm quite sure it was forged and not stock removal. As a kid I remember the Bradley helve and Chambersburg hammers they had there. 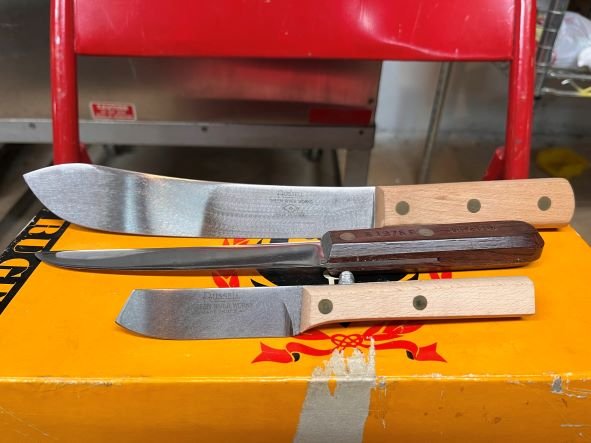 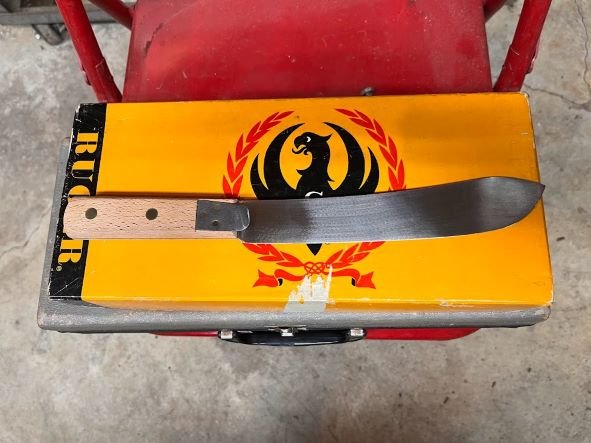 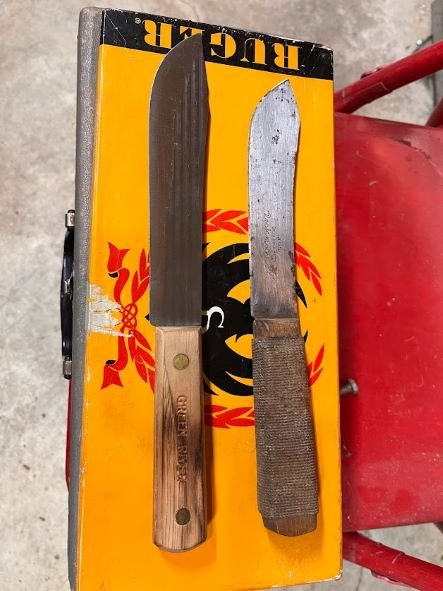 Several in the family worked there a long time ago so they were able to buy from the company store. I have a couple cleavers too.
P

They look perfect to ride the river with...

I have a book entitled The History of the John Russell Cutlery Company, by Robert Merriam, et al., and you would think from the title that it would be the penultimate reference. Unfortunately, it isn't. There is virtually nothing in it about the evolution of the products made, or about dating anything by trademarks. The most useful thing in the book is a facsimile of an 1884 catalog. So, we have to make our best guess.

The stamped trademark, I'm pretty sure, was still used into the 20th century. I can't verify the dates, but I would speculate that Russell transitioned to the etched trademark in the mid-20th century. Some close-up photos of the trademarks would be helpful.

The 8" butcher knife shown in the first photo is still in production: Dexter-Russell Traditional 8" Butcher

However, I don't think they still make this particular model with the metal finger guard.

The bottom knife in your top photo looks very similar in general form to a "kitchen knife" shown in the 1884 catalog, although the knife you have looks brand new. I didn't go through the whole online catalog to see if it is still available, though.

The middle knife in the top photo looks like about a 6" boning blade with a rosewood (?) or possibly cocobolo handle. This knife is still available with beech handle scales, but I didn't see it in the current online catalog with any kind of tropical hardwood, as you have. The knife looks pristine. It's a keeper!

The butcher knife on the left in your lower right photo intrigues me. I've never seen a Russell knife with the handle stamped that way, nor have I ever seen one with the "tire tread" indentations on the blade, or with a dark-finished blade like that. The "Green River" designation was copied and plagiarized by numerous companies in Sheffield in an effort to compete with John Russell & Co., so I'm wondering if that knife is an actual Russell Green River knife, or a knock-off. That would not necessarily mean it was inferior quality... many of the non-Russell blades with the "Green River" markings were of excellent quality. It's just that they copied the title. Those indentations on the blade have a practical purpose in that they increase the ratio of surface area to mass on the blade, to make it stiffer without making it heavier. Think of a steel I-beam as compared to a solid steel beam of equal mass. The I-beam will be stiffer. So, I would guess this knife is maybe late 20th century production, but likely a limited run. I can't say what the collector value would be. As one who has collected a few old butcher knives, I would say you might get $50 - $75 for it in the right market, but likely less than half that if presented to an uninformed or disinterested public. I would like to see some close-up images of that knife, particularly the trademark (if any) on the blade.

Regarding the knife in the lower right, it is hard to assign a date. The OP mentioned childhood memories of this knife, but we don't know how old he is. If the OP is 35 years old, he would have been a kid in the 1990's, which is pretty recent history for a lot of us old farts mature gentlemen. Knives that see a lot of use can age pretty quickly. I will say this one has a lot of patina, but not much wear. However, the tapered tang which he mentioned is an older trait. If the handle scales are pinned rather than riveted (Russell normally used five pins in a 2-1-2 pattern), that would suggest an earlier knife, but the cord wrapping appears to cover the fasteners. In his book, The Skinning Knife, author M.H. Cole shows a "Green River" skinning knife with a cord-bound beech handle, made by Slater Bros. of Sheffield (page 105), and I understand from his description that the tight, solid cord wrap would have likely been done at the factory, although a handy fellow could just as easily wrap his knife handle himself. I think a lot of native crooked knives of the Great Lakes region and Canada had home-made handles wrapped with tarred bank line.

In summary, I don't think my random comments are really of much value, but it's fun to discuss these older knives, anyway. Considering the many volumes of knife-lore in print, I have found relatively little about dating of antique cutlery. So, these are my opinions based on what I've learned, and what I believe I know. I don't consider myself an authority. With that in mind, I think most of what you have there is probably late 20th century or later. The knife with the cord-bound handle may be older, but I would be surprised if it would date to before the Depression era.

Thank you very much for your input Bob ! Sorry for the late reply. I'm currently in Tennessee visiting my daughter but I'll get some better photos when I get home.
All the knives shown were left to me from my uncle. He kept them in his gun safe along with quite a few more. His brother in law (my other uncle ) was plant manager of the Southbridge MA Russel Harrington plant in the latter part of his longtime career there.
However that doesn't mean they are all Dexter Russell or Green River knives. Some are quite old but in excellent condition because they were never used.
I also have several of the raw planks of tropical hardwood and rosewood that shipped into the plant by railroad car.

Again thank you for the info !
P 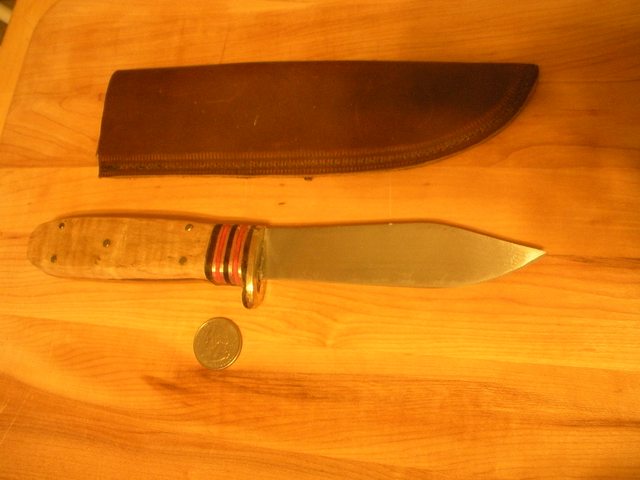 Heres a couple of original Green River knives I picked up in the 70's from a Rep who was visiting a gun shop in Adelaide South Australia at the time, they were being replaced with plastic handled Butcher knives and as they were Rosewood handled couldnt be used in the Meat trade.

I snatched them up for around AUS$10 each as I recall, I've used them a few times from cutting down Sheep and Goat carcasses over the years but as you can see they're still in great condition.
The handles are scalloped original Rosewood (I oiled them) and rivetted as tight as the day they were fitted.
I keep them sleeved in old Army Greatcoat woolen "scabbards" I stitched up years ago, which protects them from moisture and getting their edges dulled.

Wow time flies by. Got home from Tennessee and started getting things ready for winter. I’m a beekeeper so they needed attention too.
Full disclosure I’m 69 years young
Grew up on a small New England farm and built my home on a piece of it.

The butcher knife with tire tread pattern has no marking on the blade at all. Only the handle marked green river.

The cord wrapped handled knife under close inspection shows what appears to be the 2-1-2 rivet placement but I couldn’t get it to show in a photo.

While I was in the box I figured I’d add a few more photos of knives that have also been around longer than I have
Also took a photo of the cord wrapped blade marking. It is either stamped or engraved I think. Definitely not an etching.