This came up in another discussion on this board, and rather than hijack that thread, I figured I would start a new one.

As far back as I can remember (I'm 66 years old), my dad had this old alligator tooth in a drawer labeled "Measures & Reloading." I am quite sure this tooth is years older than I am. Dad had intended to make a powder measure out of it, but never got around to it. Here are a few pictures: 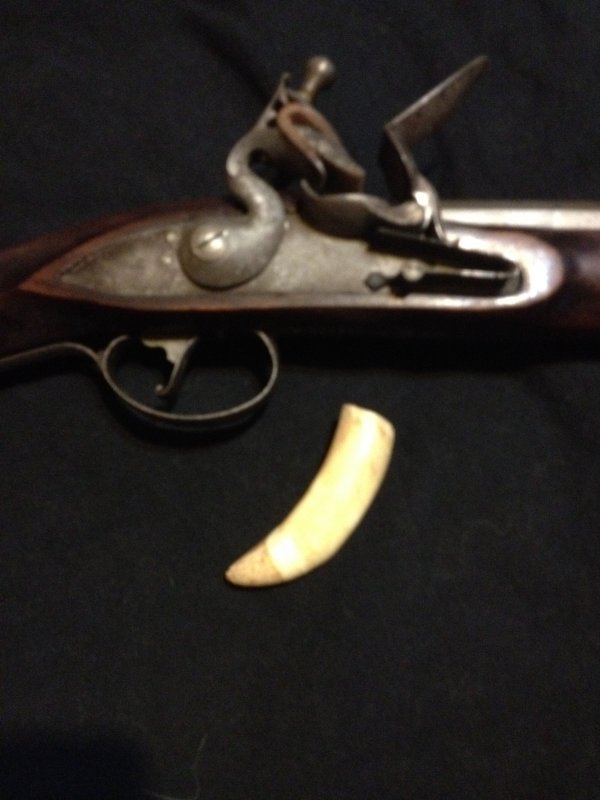 I apologize for the fuzzy image. I'm no photographer! Anyway, the first picture shows this tooth next to my Jackie Brown fowler, which has an L&R Queen Anne lock. 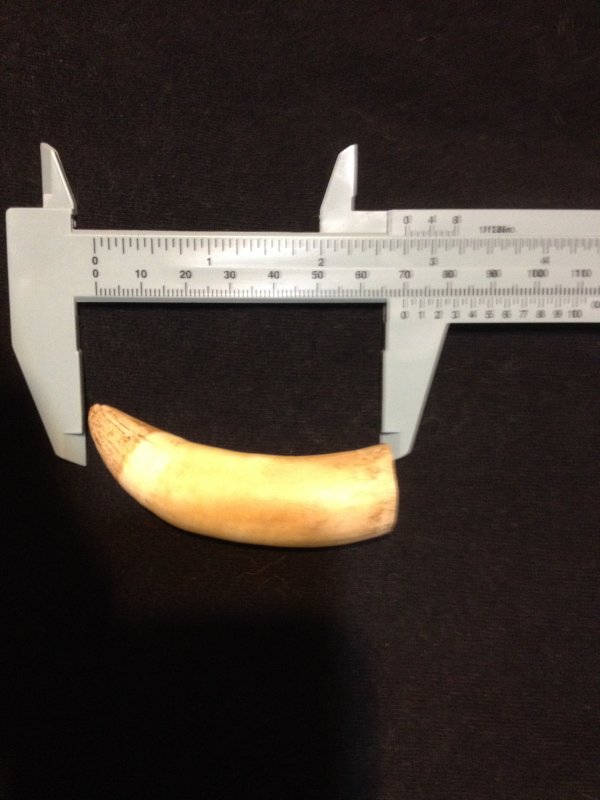 The second picture shows the gator tooth with a caliper. This tooth is just a little shy of three inches long, and the diameter is roughly the size of my thumb. The wall is quite thin, and there is very little solid material at the tip... The hollow goes almost all the way to the point. This dude must would hold a substantial charge of powder! One of these days, I'll check it and see just how much. It must have come from a pretty big animal. 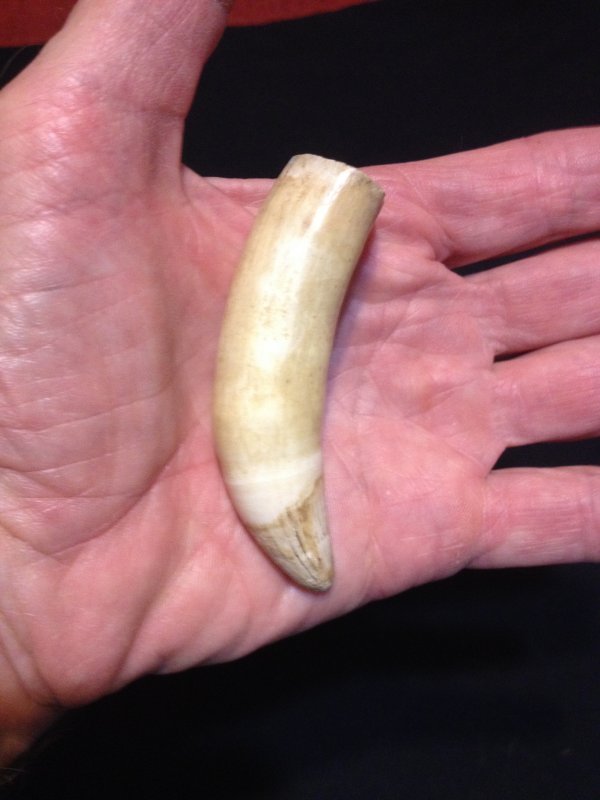 The third image is the same tooth in the palm of my left hand. I am somewhat small of stature by today's standards, but that's still a big tooth! You can get a better idea of the coloration and patina it has acquired in this photo.

Once upon a time, alligators were fair game here in Florida. In the eleventh hour, officials realized the population was dwindling, and the ancient saurian was given full protection. Well, if you have a few bull alligators and you have a few females, you give them some privacy and a little time, next thing you know, you have a lot of little gators. So, Florida now allows some closely regulated hunting, and "nuisance" alligators are trapped or killed outright by licensed hunters. I was born in Florida and have never lived anywhere else (except for a very short time in Denver, but that's another story). It's not hard to find an alligator if you want to see one and you're willing to get off the pavement, and if you come to Florida on vacation and want to spend time near fresh water, you'd better keep an eye on your pets and small children. I am saying that in all seriousness. There are plenty of them out there. I've seen gators in urban retention ponds. Alligators tend to go under water if they know they are being observed closely, and as far as I know, attacks on adults are rare. However, small animals and small people attract them. They can be very stealthy, and if standing water is more than knee deep, there could very well be a gator in it. So, keep an eye on the young'uns. Seriously.

Back to muzzleloading… Alligator tooth powder measures were probably not overly common, but they were known. I can't quote any period references, but there was an article in the Museum of the Fur Trade Quarterly (MOFTQ) which showed an old gator tooth powder measure from Alabama. This was in Vol 26, #4, "Collection Corner - Southern Rifle Accessories." This is the same article that was referenced in the "Powder Gourds" thread. The measure shown in the MOFTQ article appears to have a suspension string or thread run through a hole bored through the tip of the tooth. However, the tooth I have in my possession is hollow pretty close to the tip, and there isn't much solid material for drilling a hole. If I were to make a measure of it, which I probably won't, I would probably drop in some epoxy, which would create a more solid area at the tip for cross-drilling, and would reduce the capacity of the tooth without diminishing its size. However, I want to keep this one as it is, as a souvenir of my Dad.

This tooth is not for sale, nor is it being offered in trade. I'm saying that because someone asked. However, I Googled "alligator tooth for sale" and found that they are out there, legal for purchase in the USA. So, if you want one to go with your southern rifle or Carolina gun, you can probably find one. If you make a powder measure out of it, show us some pictures!