First matchlock, from decades ago. 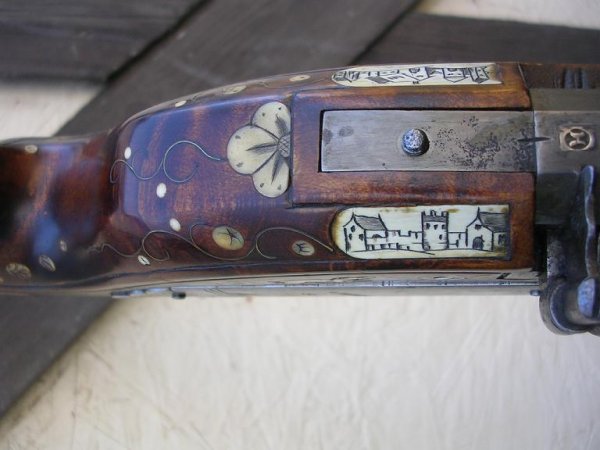 Gents,
below was my first attempt at a matchlock.
Some photos have been floating around for a long time.
I never did get back to taking better ones after we re-sized wrongly and got 'wiggly' lines.
This shows what we didn't know back then!
Rick and some others already know this one, so if you do too, please excuse!
Was inspired by another pommy called Maurice Taylor, to make one, after he wrote how matchlocks were So reliable!
The wood came from a trucker mate, who brought it up as blocking on a load from down in the US.(Still have enough wood for another one.)
Started with the odd inlay and it went from there. 300 and odd inlays, fruits, nuts and animals. LOL Very enjoyable to make it was. Brass wire and bit of silver too.
Some inlays were rough copies of the type we see on English/Dutch and German matchlocks.
Took a while practicing to get to draw the critters as they were drawn in the 16th & 17th centuries. If they looked like Real animals, i'd have got it wrong.
Clam shells from the local river also as inlays. Bone from muskeg is mainly deer and buffalo. Some antler too. The old brown muskeg bones look more correct , but are brittle
and hard to scrimshaw.
Well, here it is. (Did get a mule deer with it that first season. buck.) 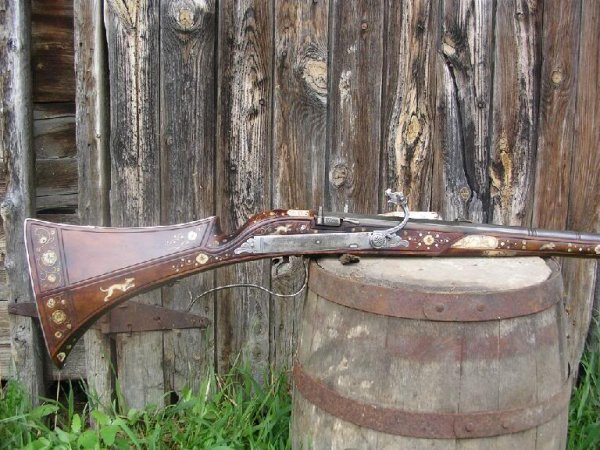 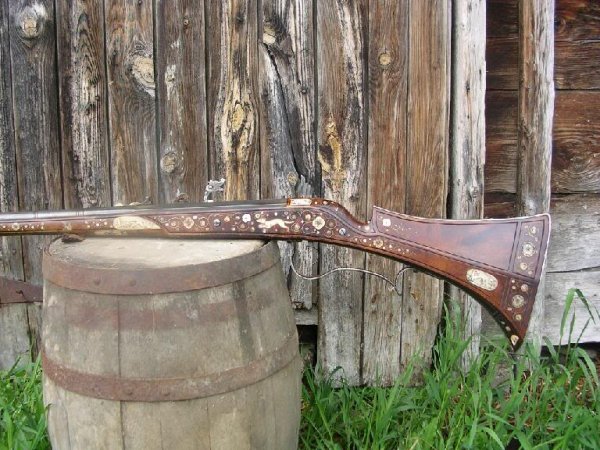 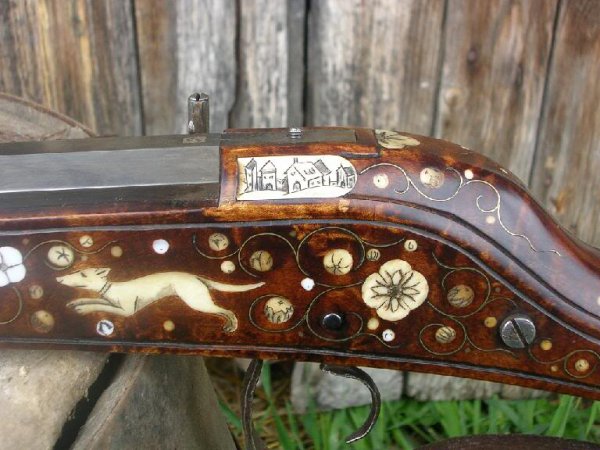 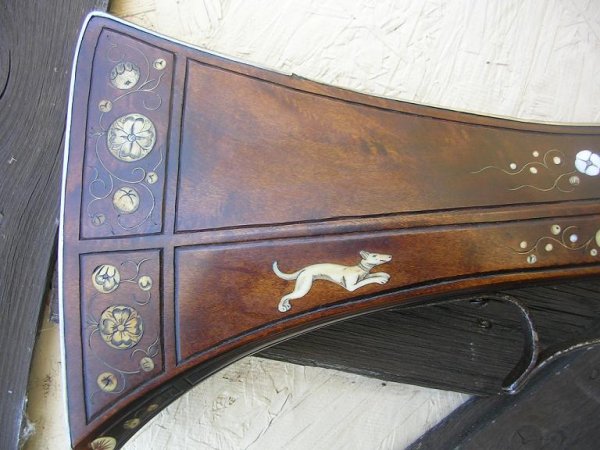 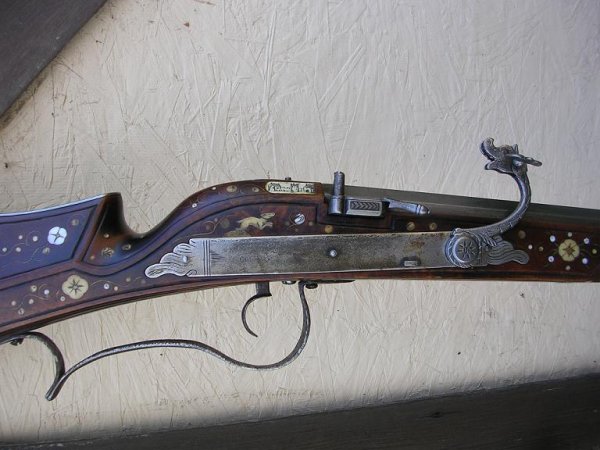 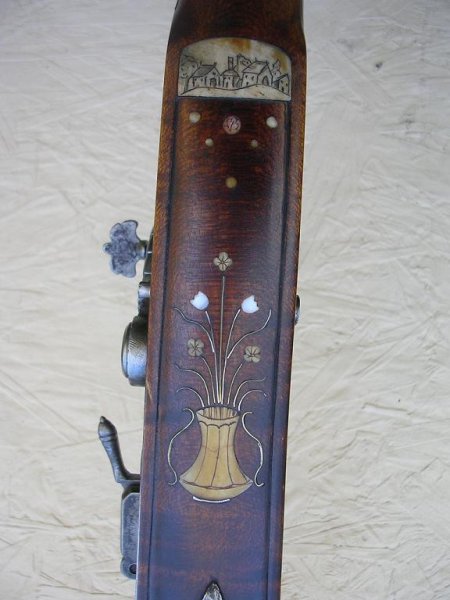 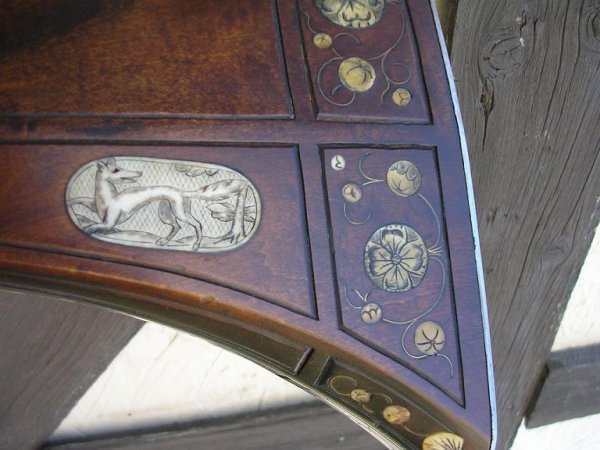 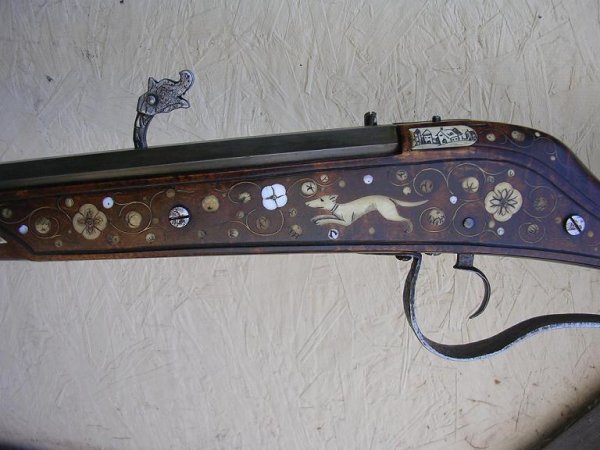 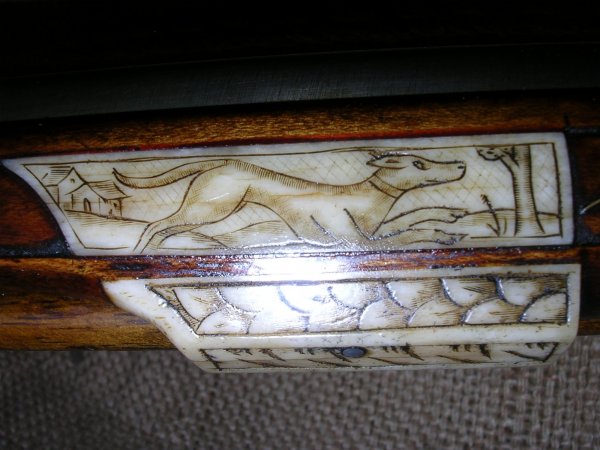 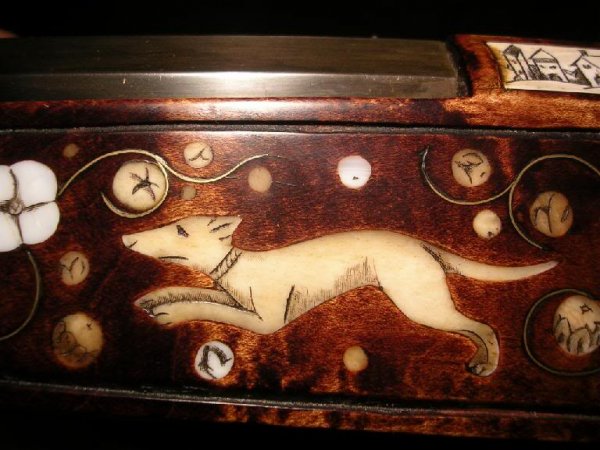 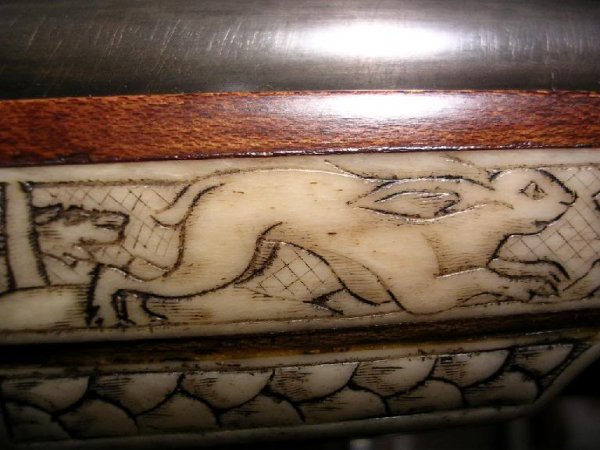 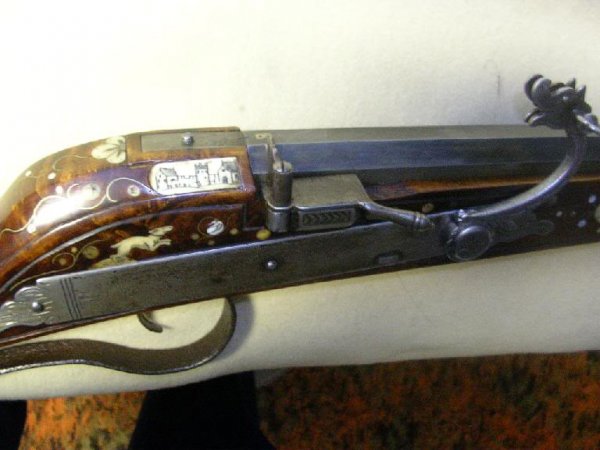 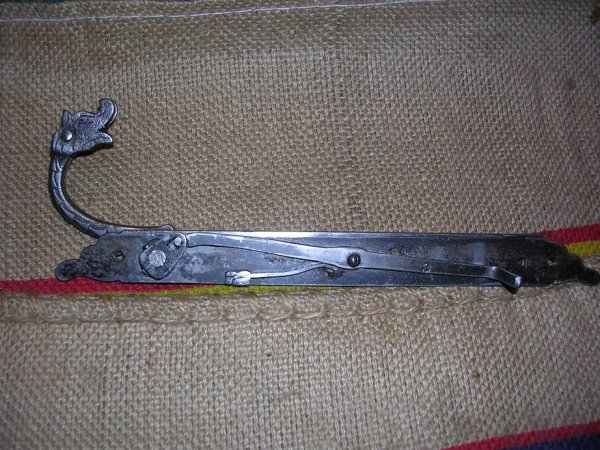 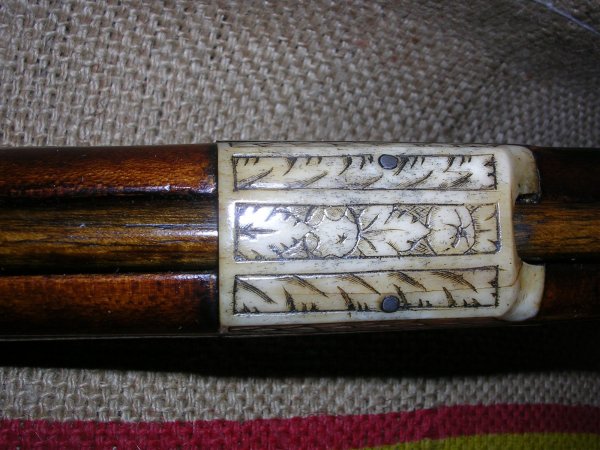 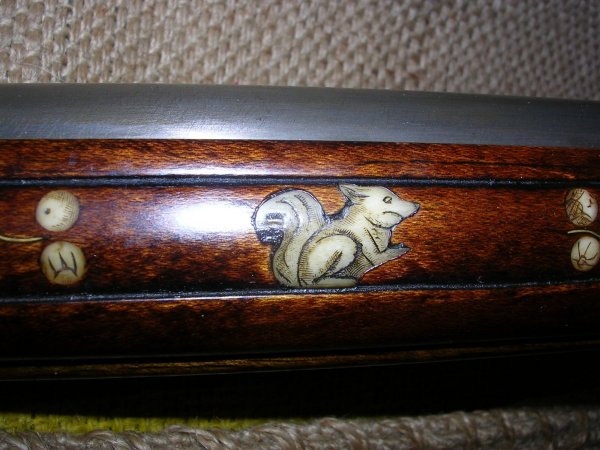 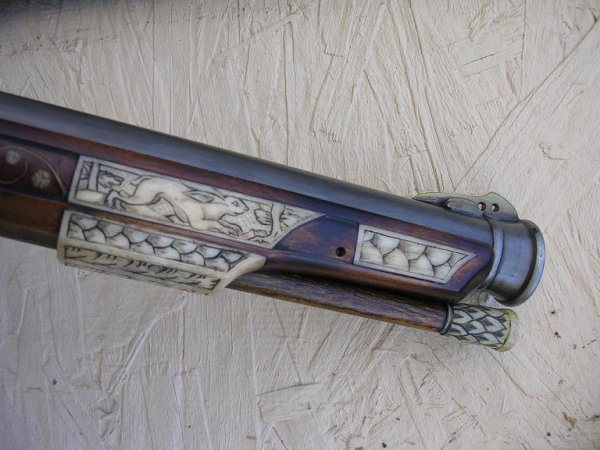 Sorry chaps, having trouble getting the right pictures to load!
Some of the little critters hadn't had their photos taken until fairly recently... 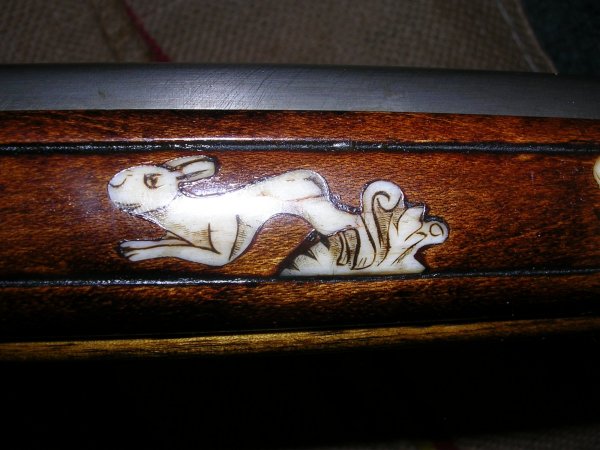 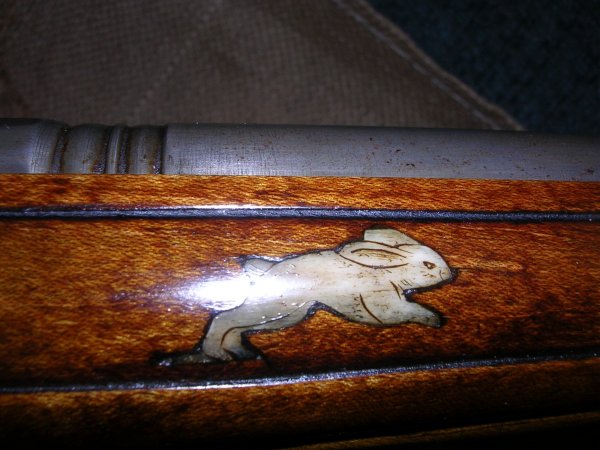 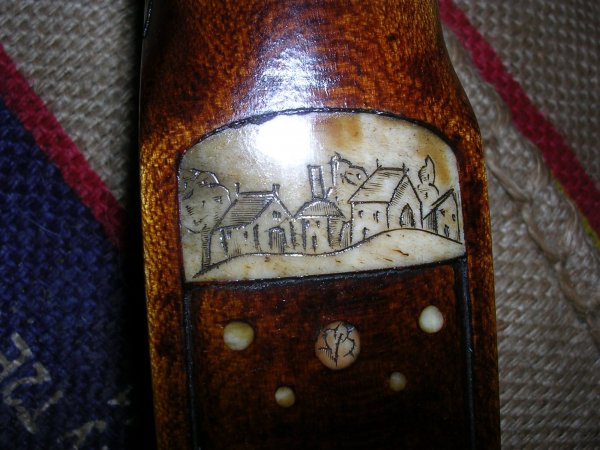 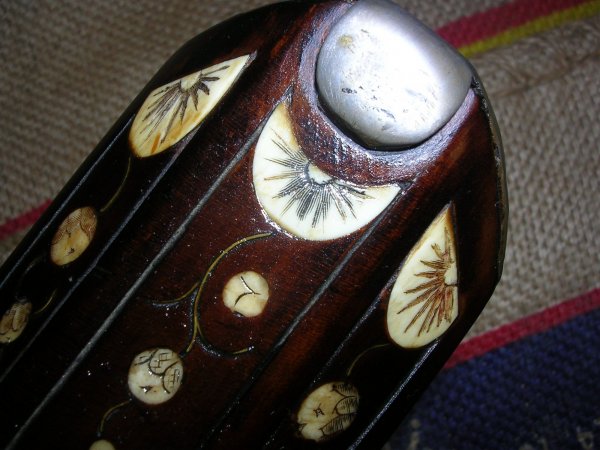 It is delightful, I particularly like your trigger but the inlays are the cherry on the top

Robin,
The trigger is one thing I got wrong.
Doesn't show in the photos, but I did not know when I made this, (maybe 20 years ago), that the trigger should be hung well up in the stock, so I hung it like a 'regular' trigger with a blade!


The barrel is a Colerain, 20 bore x 36", altered to matchlock and a cannon muzzle soldered over the barrel.
Matchlocks from that time showed a blend of good and crude, and I Know I can do Crude.
Metal -work sometimes is very blacksmith, (guards, buttplates and triggers or sear bars.) but barrels are often better, as though parts made by different workmen. Just like later.

Beautiful work!!!!! Love your animals Pukka, a good capturing for sure.
Robby

Great scott, man! You have been hiding this wonder from us for 20 years? Simply outstanding!
R

Fantastic job Richard !!!! WOW!!! What a great job. How long did it take to make all those inlays ? LOL

Phenomenal, arguably the BEST handmade build I have ever seen anywhere on these MZL Forums! I’d take that over a custom Gooden Age longrifle anytime!

Truly spectacular! You nailed it ...
D

beautiful work. that is about the coolest thing i've seen
P

Well Gents, I feel all awkward and such now...seeing as you like it so much!

It's an honour that you like it . Thank you.
Rick,
I never took note of my time on the tiny critter inlays and such. It was all just a pleasure to do. I started and didn't have any intention of doing this many, but just kept playing with it! (few here...few there kind of thing)
I'd just do a bit between other farm stuff in the winter. half hour here and there.
Tools for inlaying brass wire were made from old hacksaw blades, heated and bent to a radius, then quenched. Worked V well.
The inlays might be about 1/8 " deep or more the small 'dots ' may be deeper, as a hole was drilled and they were hammered in with some glue. I enjoyed every minute of it, and am pleased you enjoyed it as well!
Flint, Bill, Double, Morb and all,
Must say I am rather awed at your response! Thanks guys!!
This one made of clam shell got missed. Not all got pictures taken yet. 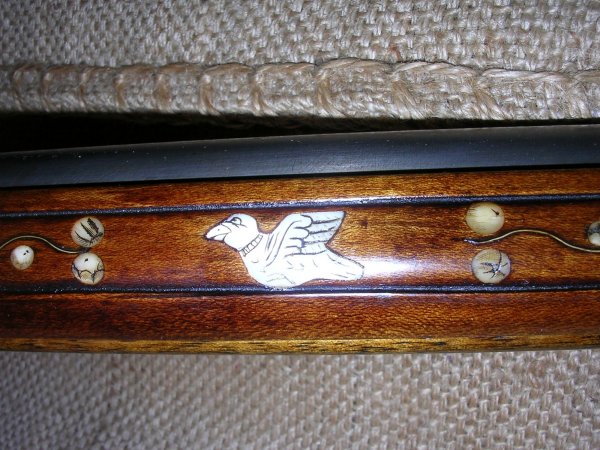 I think it is museum quality. and the scrimshaw of the city scene's, I expect to see a KNIGHTS TEMPELER appear.as you can see I rely like it.
V

Very fine work! Thanks for showing us.

I am stunned. What a beautiful piece of art. You do shoot it don't you? I wish I could see that in person and hold it in my hands.
P

Mr. T,
I saw a film years ago, how a fellow rode his John Deere lawnmower right across the US to visit his brother.
So, Anything is possible! (and you'd be most welcome.)

Richard, that film featured Richard Farnsworth, a fine character actor. He had a ranch here in Billy the Kid Country, and supported local historical efforts. Bet he would have loved your incredible matchlock as well.
2
You must log in or register to reply here.
Share:
Facebook Twitter Reddit Pinterest Tumblr WhatsApp Email Link