I haven't had much time to spend on the board lately. Work has been crazy and I've been trying to get ready for hunting my first season in Alabama. It's a totally different experience than anywhere I've lived/hunted before (Nebraska, Indiana, Colorado). I wanted to share my experience with harvesting my first deer in Alabama on public land.

I don't know if I've ever been more proud of a deer than I am of this little 8 point. I hunted 2 days of the primitive season on the WMA I hunt and hunted yesterday and today (general firearm season). I was starting to feel humbled by Alabama public land hunting with very few sightings despite seeing good amounts of promising sign. I was still hunting my way through a hardwood/pine transition but was really just scouting my way to a new area I had e-scouted.

I caught sight of a couple does first and then I saw this buck with his nose right on another doe's rear. I could tell right away he was a legal deer (my goal for AL this year was ANY legal deer) so I dropped my pack and crawled to a wood pile (hoping there were no snakes hiding in there). I found a nice log for a rest and settled in for about a 75 yard shot with my trusty old 54cal Cabela's Hawken caplock. I let the smoke fly feeling just ok about the shot. Felt like I had rushed it a bit and couldn't tell for sure if I had hit him.

I gave him a few minutes, grabbed by pack, and went to where he was standing. Hardly. Any. Blood. I spent over an hour trying to follow the blood trail but was finding only specks here and there before I lost the trail completely. Convinced I had put a bad shot on him, I decided to scout another area for a while to give him some more time. I came back to the last blood about 2 hours later and still couldn't find more blood. So I decided to just start canvassing the ridge it seemed like they all ran towards and found him about 75 yards from where he was shot. I was so relieved and excited to recover him. Shot was a little high but really not too bad. 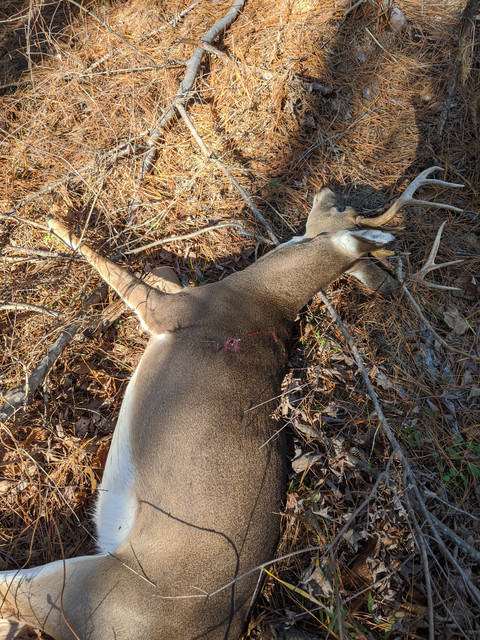 Tsaan Wookkuh friend!! Hunting a new place is a challenge! Nice buck!! You should be proud! Good on you for staying on the trail!!

Congratulations on a beautiful buck!

Atta boy Drew! Congratulations on sticking with that tough trail.

Congrats to ya. Stick to it ness wins again

I've never been so happy to find a deer. Was really convinced I had wounded and lost him.

Congrats on a good deer, some of those Al bucks can be tough too get on..

Which WMA was you on?

Congrats on a great buck and thanks for sharing.

smo said:
Congrats on a good deer, some of those Al bucks can be tough too get on..

Congrats on a fine buck and hunt.NY GRIZ

That's a very nice buck, congratulations. Your shot actually looks good, even if a tad high. I'm surprised he didn't leave a heavier trail to follow. Remember it only takes 3 or 4 seconds for a deer to cover that distance, so he likely died and dropped fairly quickly.

hanshi said:
That's a very nice buck, congratulations. Your shot actually looks good, even if a tad high. I'm surprised he didn't leave a heavier trail to follow. Remember it only takes 3 or 4 seconds for a deer to cover that distance, so he likely died and dropped fairly quickly.
Click to expand...

I'm also confident that he died quickly based on the amount of blood in the cavity and it was clear he didn't thrash around or anything where he was laying. It was just difficult for me to see exactly where he went after the shot since there were multiple deer and, ya know, smoke.

Here's a "good" example of the blood trail I was following. Most spots were literally a single speck. I hear you pain when tracking gets tough. I was the guy people called when tracking got tough due to no blood. I was taught to track by disturbance and confirm with blood. Saved many a friends day...
Walk

Way to stay on him, congratulations. Be proud of that journey!